Accessibility links
This Rising Star Chef Is Black, Vegan — And Only 11 Years Old : The Salt U.K. tween Omari McQueen began to cook at age 7, when his mother experienced paralyzing migraines. It wasn't long before he appeared on TV, opened a trendy food hall booth and sat on an expert panel. 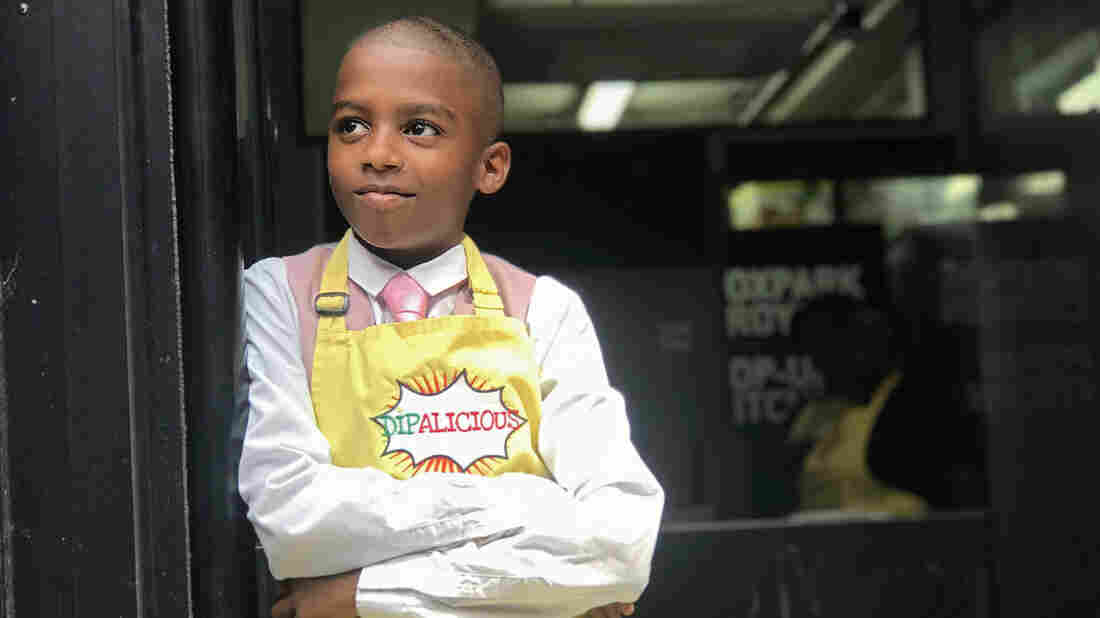 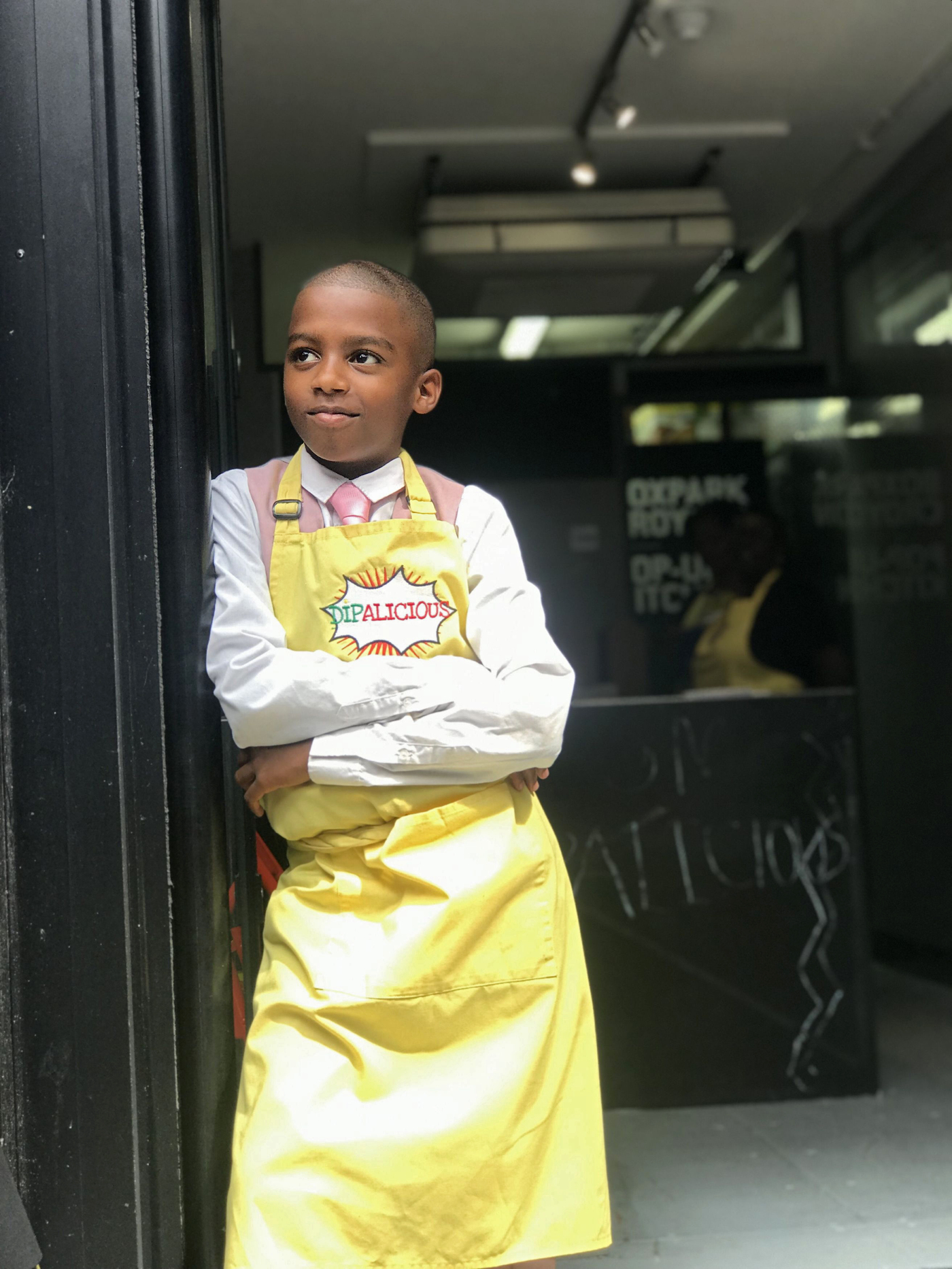 An 11-year-old boy recently hit up 53-year-old Roger Wade on LinkedIn, wishing to open a restaurant one day. Wade wrote back: Why not now?

When Wade, CEO of Boxpark, a chain of hip food halls in London, was 11 years old himself, he sold candy to his schoolmates. He cited that memory as a heartstring plucked by Omari McQueen, the 11-year-old LinkedIn user. "Age doesn't define a person any more than gender or race does," Wade said. "We were happy to support a dream. Omari is a role model for dreaming big."

Wade waived the £1,000 rent for a weeklong pop-up at Boxpark's Croydon location, freeing McQueen to bill himself as the "world's youngest restaurateur" — even younger than Flynn McGarry, who, in 2011, became a foodie wunderkind at 11 1/2 by running a restaurant out of his California home (and charging $160 a head when he debuted in New York).

McQueen's pop-up week spanned a week in August, which was a very busy month for him. A few days before Dipalicious, opened, he appeared on Step Up to the Plate, a BBC food competition in which children jostle to showcase their restaurant skills. (He had already taught the BBC's Newsround how to make vegan shepherd's pie.) McQueen did not advance in the competition, even though celebrity chef Liam Charles scored his beetroot risotto a 9.5 out of 10.

"I'm not bothered," McQueen said recently as he peeled potatoes in Dipalicious' kitchen. "I skipped ahead to having my own proper restaurant anyway."

Now he enjoys a childhood of industrial blenders for Christmas, iPad breaks to play Cooking Mama and international fame, but it wasn't always so giddy. When McQueen was 7, his stay-at-home mother said she began suffering from hemiplegic migraines, which would paralyze half her body for up to 24 hours. In order to make sure her six kids got fed, she said she tried teaching her eldest child to cook, but it was McQueen, second-eldest, who took to it. His father, the son of Jamaican immigrants, had barely taught McQueen how to fry fish before the precocious young chef stumbled upon a PETA video on YouTube and became vegan, joining a British renaissance in plant-based eating. (Similarly, McGarry's early signature dish was a beet Wellington).

McQueen approaches his veganism with kids-say-the-darndest-things candor, leaving carrots and almond milk out for Santa, along with a note telling him why he should be vegan. Or asking attendees at a vegan conference — for which he sat as an expert in a panel discussion — to raise their hands if they're not vegan, then asking them plainly, "Why are you not vegan?" On a national evening news program, he said milk is "cows' pus" (because of mastitis that commonly affects dairy cows). Does he ever drink Coca-Cola? "No, it's used to clean toilets." But his candor cuts both ways: On his televised food competition, he called natto "disgusting."

Although he is often cited as an "award-winning chef," the awards he has won have been for vegan compassion and entrepreneurship, not cooking — yet. Whereas McGarry was re-creating labyrinthine recipes from The French Laundry Cookbook, the go-tos of McQueen's separate Dipalicious food brand are easy purees and smoothies. His vegan Caribbean offerings at Boxpark showcased simple, on-trend dishes including pumpkin soup (£7), barbecue jackfruit with breadfruit chips (£8) and callaloo (£8). While it's easy for Caribbean spice to punch the tongue with heat, his hugs it with flavor: Omari umami. Dipalicious sold no desserts except for its sweet namesake dipping sauces (£4.99) — a puree of peaches and pears with nutmeg, for example. McQueen also made sure to offer smaller-portioned kids' meals (£3.99), although child vegans are controversial.

McQueen's next big-picture dream is to convert a bus to a food truck and drive around the country with his father, a bus driver, evangelizing veganism's moral and nutritional imperatives. "You can tell people that food is healthy or kind to animals," he said while eating dairy-free raspberry ice cream from What The Pitta, the other vegan shop at Boxpark Croydon, "but they won't care unless the food is fun and delicious."

Celebrity is a big part of his thinking as well — he has met actor Daniel Radcliffe and British television stars — and so he has a more immediate goal in mind by his 12th birthday in May next year: He aches to meet Gordon Ramsay. "He's like a superhero. His superpower is being a chef who shouts," he said. "I love to cook and make delicious food, but I want to learn how to do it while shouting, because that looks fun."

NPR: Who would you choose between [your favorite athlete,] Alexis Sánchez or Gordon Ramsay?

When a recent Dipalicious customer was confused to be greeted by an 11-year-old's firm handshake and a lecture on the benefits of jackfruit, McQueen pointed to a photo on the wall of himself in a tuxedo. (He bought it when he was 10 — "but it still fits me.")

"I'm in charge here. This is my restaurant," he said. The customer — Chris Tagoe, a 38-year-old IT developer — walked out with pumpkin soup and vegetable curry. "I wouldn't normally go vegan or veg," said Tagoe, "but he's really nice."

With his pop-up closed, McQueen is back to his YouTube channel, where his vegan pizza recipe includes an "Uptown Funk" dance break, and he sometimes offers left-field advice on how to become a millionaire, though he isn't one himself. Home-schooled until now, he begins public school in the fall, although he'll still sell his sauces and prepacked vegan meals after school. "I'm ready for the world," he said.