Accessibility links
Vineyards Facing An Insect Invasion May Turn To Aliens For Help : The Salt A stowaway from China, the spotted lanternfly, is eating its way across Pennsylvania, killing trees and grapevines. Scientists are considering importing the bug's natural enemies from back home. 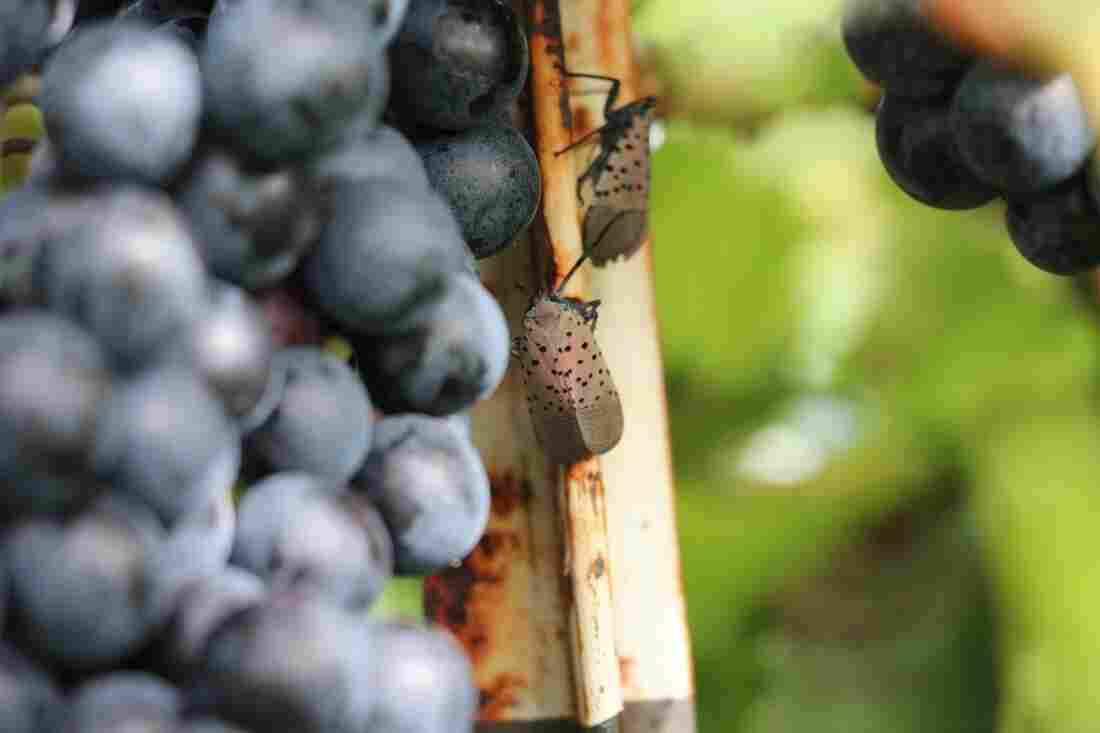 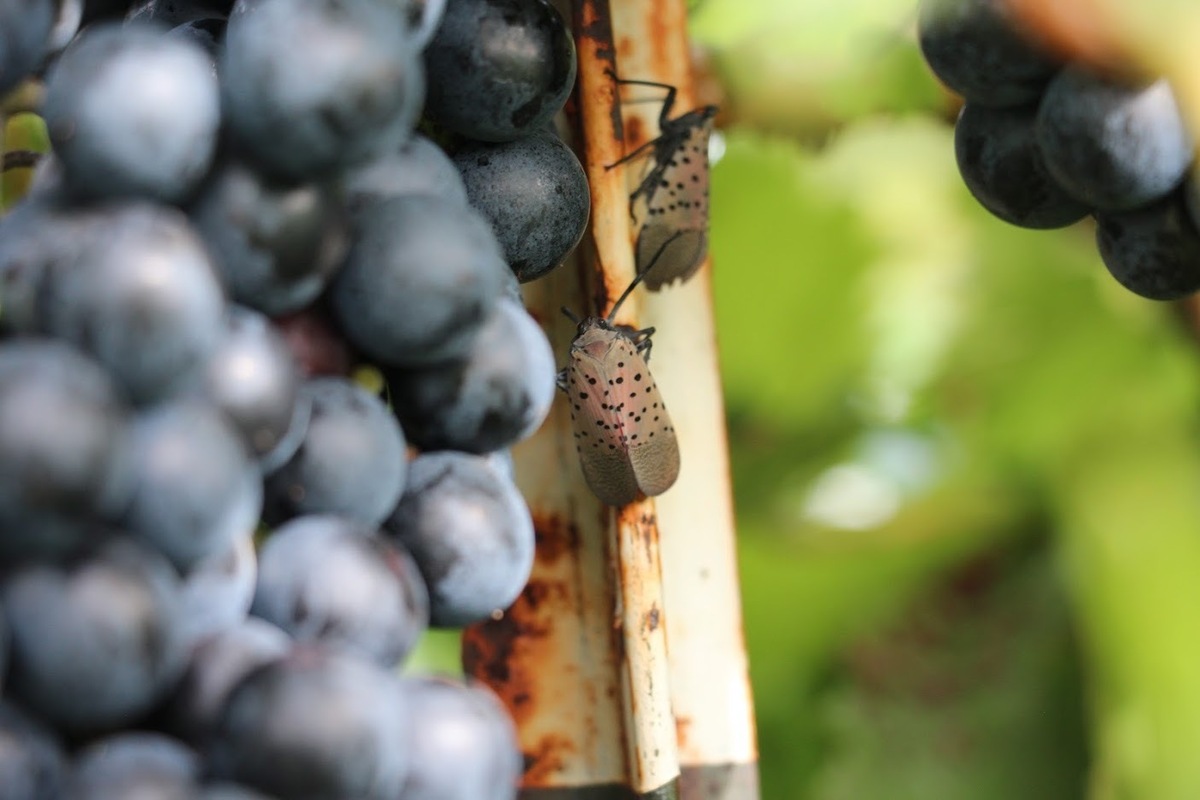 An adult spotted lanternfly searches for tasty grapevines at Vynecrest Vineyards and Winery, near Allentown, Pa.

Walking around a park near Allentown, Pa., I didn't even notice the bugs at first. Then Heather Leach arrived. She's an insect expert from Penn State University.

She pointed me toward the trees, and suddenly I realized they were everywhere: spotted lanternflies. An army of gray bugs, each one about an inch long, black spots on their wings, was climbing the trees' trunks. They marched slowly along branches. They were sucking the trees' sap, excreting some of it as sugary water that rained down on us in a gentle shower.

This is the latest great insect invasion to hit the United States. 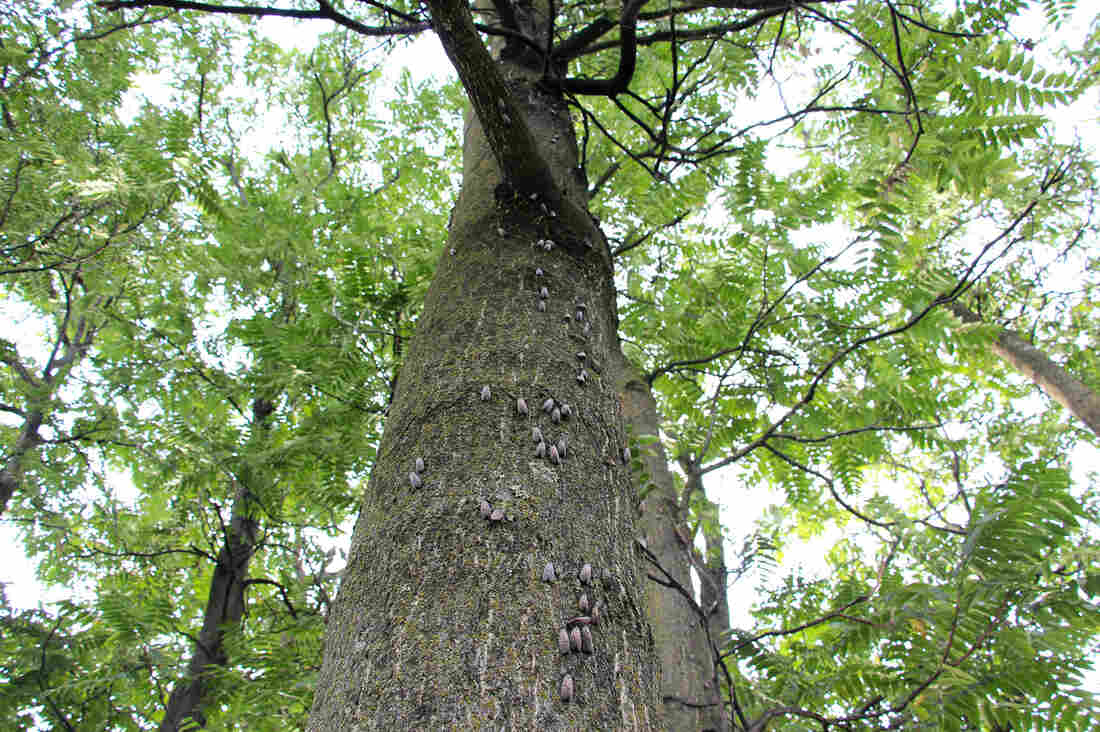 Spotted lanternflies on the trunk of a Tree of Heaven, its favorite host plant, along the Ironton Rail Trail in Berks County, Pa. Dan Charles/NPR hide caption 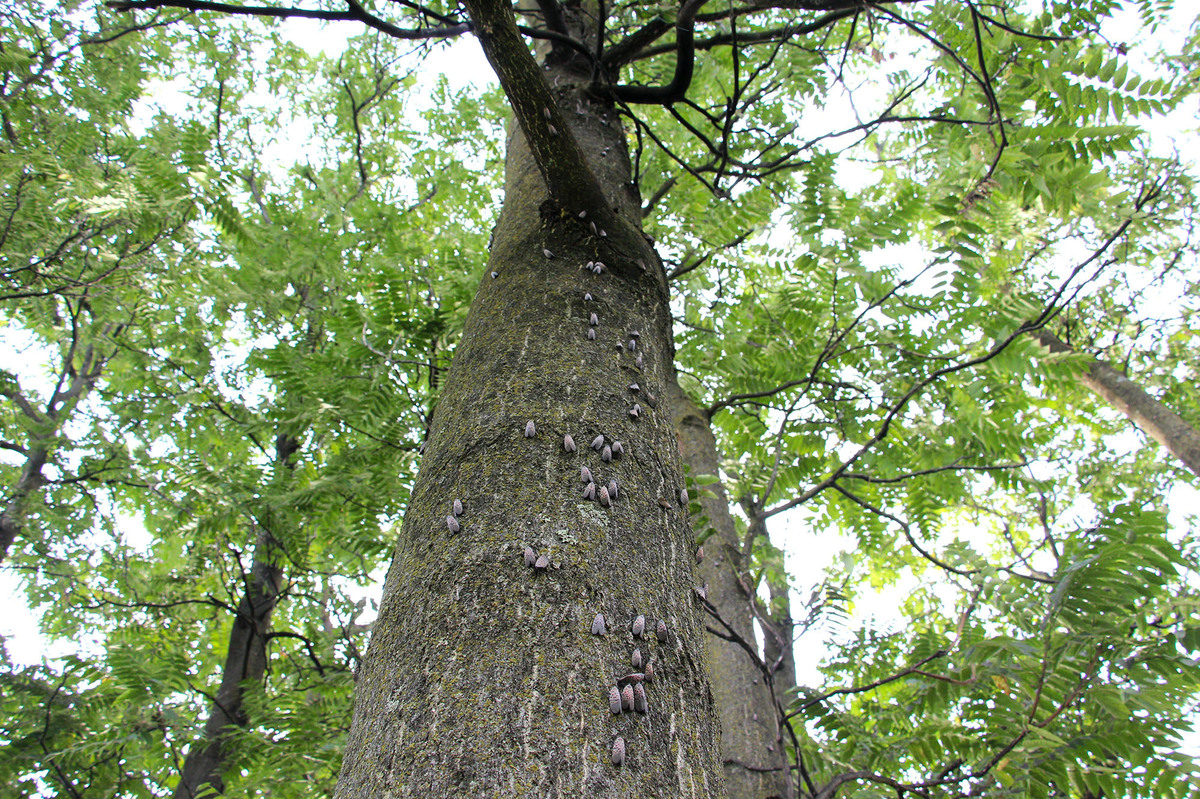 Spotted lanternflies on the trunk of a Tree of Heaven, its favorite host plant, along the Ironton Rail Trail in Berks County, Pa.

"They are kind of ugly, especially when there's thousands of them," Leach says. "Poke at them and you'll see how strong of a hopper they are; they just take off." She demonstrates. The lanternflies jump so fast and so far, they're just a blur in the air. It makes me laugh.

"Yeah, they can be entertaining," Leach says. "You see a lot of kids playing with them, trying to stomp on them."

The spotted lanternfly, Lycorma delicatula, first showed up in the United States five years ago, right here in Berks County, Pa. Nobody knows exactly how it got here. Most likely, some eggs hitched a ride across the Pacific on a shipping container.

Now there are hordes of them spreading across the state and beyond. Chances are, they'll eventually reach most of the country. "It's an insect that lays its eggs on anything, including things that get transported," Leach tells me. "It hops on vehicles and can hold on" as you drive. 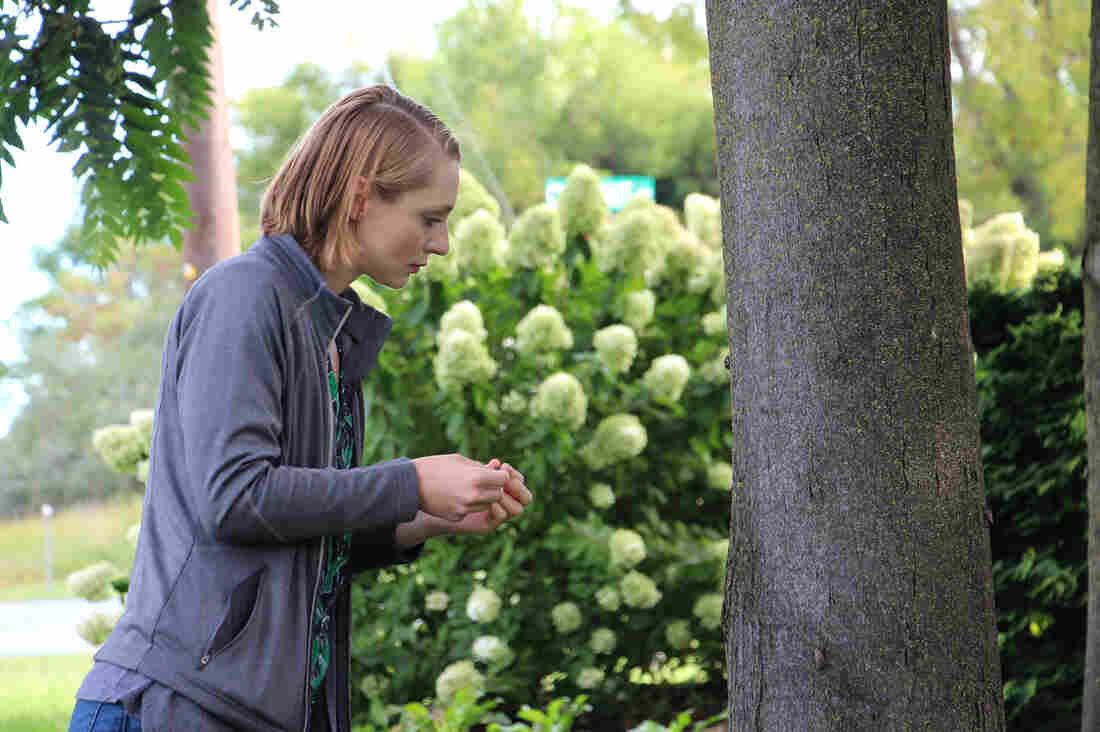 Heather Leach, an entomologist with Penn State University, is assigned to answer lanternfly questions. "All I do is breathe, eat, sleep, lanternflies," she says. Dan Charles/NPR hide caption 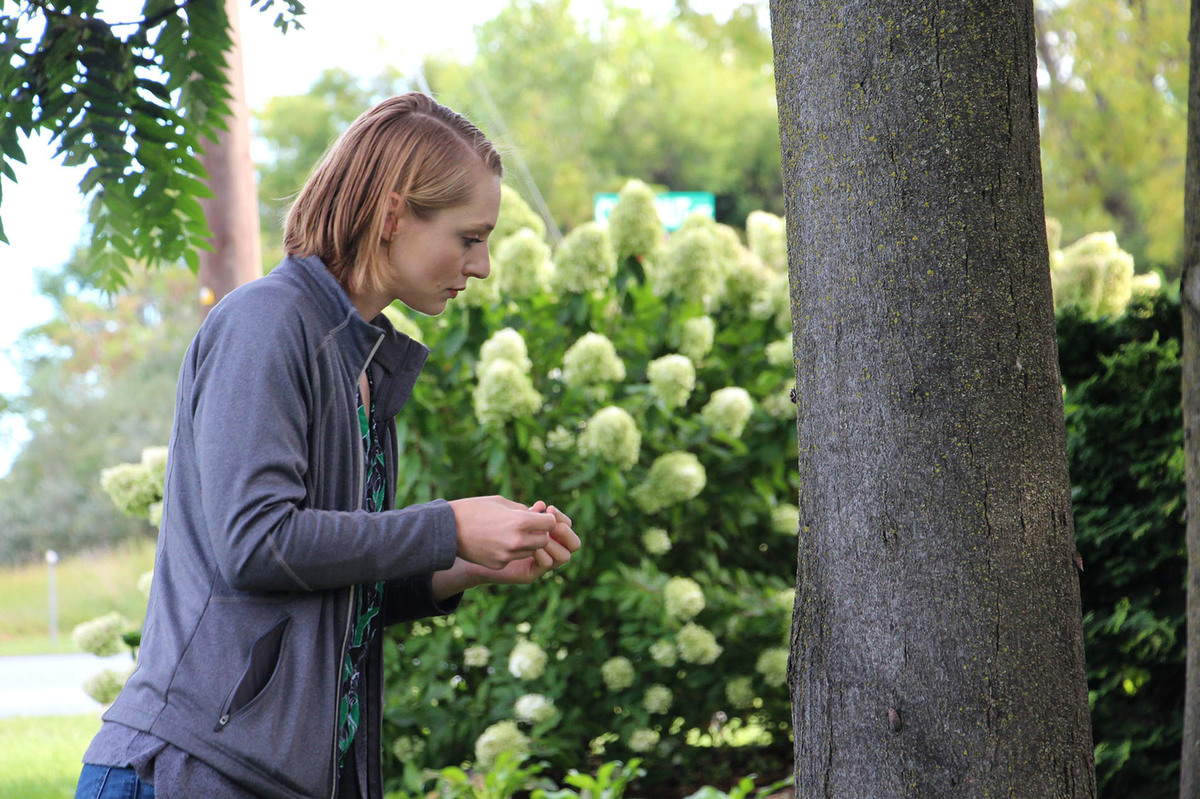 Heather Leach, an entomologist with Penn State University, is assigned to answer lanternfly questions. "All I do is breathe, eat, sleep, lanternflies," she says.

These insects don't seem to have any natural enemies in the United States, but there are plenty of trees full of sap for them to drink. The lanternflies prefer a kind of tree that arrived from China many years ago, an invasive species called Tree of Heaven. But they also can feed on maples, oaks and dozens of other trees.

"They've got a buffet out here," Leach says. "They can eat all of these plants, and they don't have anything that's taking them down. So they're having a good time! They're having a party, right?"

Penn State set up a hotline that people can call with lanternfly questions. It fields panicked calls from people with swarms of lanternflies on their houses, or their trees. Leach tells them not to freak out. These insects won't bite or sting or carry disease. But they're not a joke, either. They really can destroy things.

The lanternfly gets its name from the black and red color on the underside of its wings. The insects cluster on trees and feed on their sap. Dan Charles/NPR hide caption

The people who are getting hit first, and hardest, are vineyard owners.

Leach takes me to see one of them: John Landis, co-owner of Vynecrest Vineyards and Winery, west of Allentown.

When we arrive, Landis is pressing grapes. He is smiling. Harvest is always a good time, he says. But then I ask him about lanternflies, and he turns serious.

"We've never had a situation like this in 40 years," he says. "If it starts to decimate your vineyard, it could cause people to go out of the winery business. It definitely kills vines."

We walk out into the vineyard, and sure enough, the vines are full of lanternflies, especially along the edges, next to the adjoining woodland. Many vines are dead already from last year's attack.

"We had lanternflies just pouring out of these trees last year, invading this area and down this hill," Leach says.

Vineyard owners can spray insecticides to protect their vines, but it's costly and it kills helpful insects like bees and ladybugs as well.

It also doesn't help with the really big problem: the damage that lanternflies may be inflicting on the wider ecosystem.

Leach says scientists are worried that the invaders could alter the ecology of forests, killing off some species. "We're also starting to see early indications of displacement of other insects, and, as a result, displacement of birds as well," she says.

What could stop them? Leach mentions a idea that seems a little crazy at first. Maybe, if the problem came from China, the solution could, too.

You see, in China, the lanternfly has natural enemies that hold it in check. They are tiny wasps, so small you barely see them.

Scientists from the U.S. Department of Agriculture, working with colleagues from China, have brought two of these wasps to the U.S. under tight security. The wasps are under quarantine in a couple of USDA labs.

One of them, the Beneficial Insects Introduction Research Unit, is in Newark, Del., on the edge of the University of Delaware campus.

Two USDA scientists, Amanda Stout and Kim Hoelmer, lead the way into the quarantine room. We're all suited up in white coveralls, head to toe. We go through a kind of airlock designed to keep any insects from escaping.

The quarantine room itself is bathed in red light. Insects can't perceive this light. It just seems dark to them, and this helps keep them quiet. 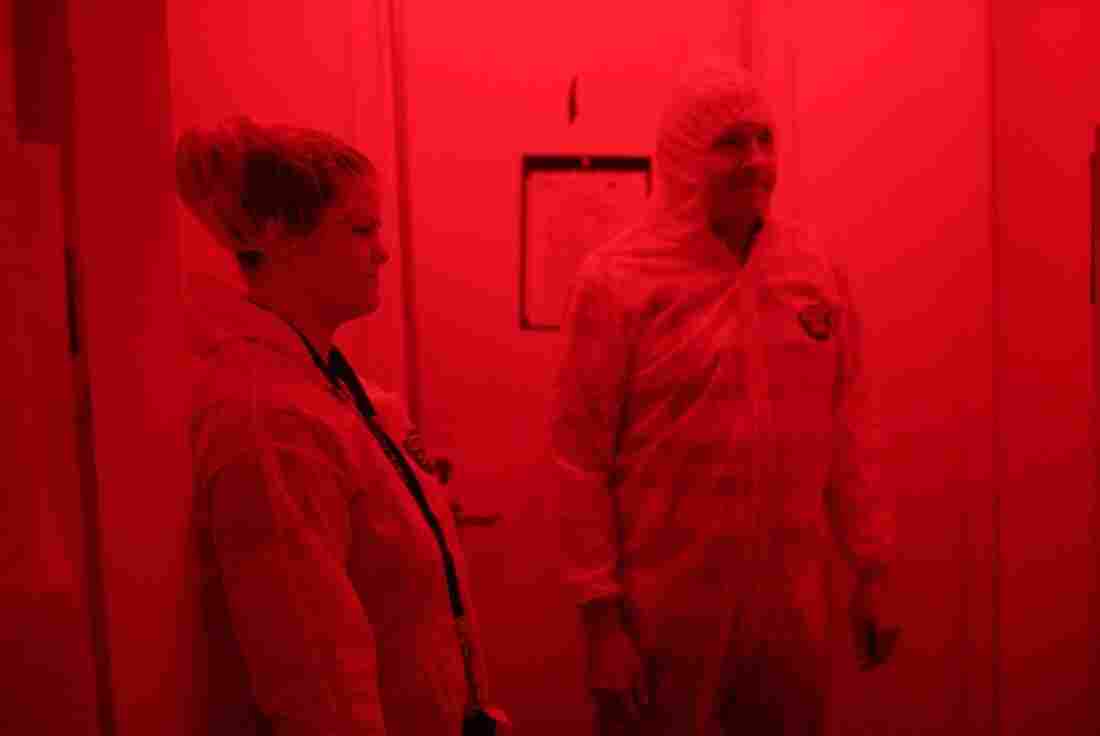 The room is full of "environmental chambers" that look like big refrigerators. Hoelmer opens one up and points me toward something in a sealed container.

"There's a little white thing about a quarter of an inch long, with a dark spot," he says. "That is the cocoon."

This is one stage in the life cycle of a lanternfly-killing wasp, Dryinus browni. The wasp lays its eggs inside baby spotted lanternflies, called nymphs; the eggs hatch into larvae that feed on the nymphs and kill them. In fact, a dead nymph lies not far away from the cocoon. Hoelmer brought that nymph from China. It was already carrying the larva of the wasp inside it.

In a few months, an adult wasp will climb out of this cocoon and look for more spotted lanternflies to attack.

Hoelmer is hoping that someday, they could could do this outside the lab, in the forests of Pennsylvania: an invader to fight an invader.

First, though, he has to prove that the wasp won't just become another troublesome invasive species. After all, there's a long history of people importing animals or plants that end up causing lots of problems. One famous example: Australia imported the Cane toad in 1935 in an effort to control a beetle that was attacking its sugar cane plantations. It was an ecological disaster, as toad populations exploded.

But Hoelmer says scientists have learned their lesson and now have a much better idea of what's ecologically safe. "There are many, many examples of successful and safe introduction of natural enemies," he says. For example, the olive fruit fly started infesting California's olive orchards in the 1990s. Hoelmer and his colleagues located some natural enemies of the fly in Africa, and those imported insects are helping to protect California's olive crop.

Hoelmer says this works best when the natural enemy is a specialist — when it only attacks the invasive species that you're trying to control.

So now he's trying to figure out whether these wasps from China lay their eggs only in lanternflies or whether they might attack native North American insects, too.

Getting answers will take years. Meanwhile, the spotted lanternfly is likely to spread.