Accessibility links
The Battle Over Fish Farming In The Open Ocean Heats Up, As EPA Permit Looms : The Salt Advocates say farmed seafood is more sustainable than wild-caught. Critics say these farms pollute surrounding waters. Federal waters have been off-limits to aquaculture, but that may soon change.

The Battle Over Fish Farming In The Open Ocean Heats Up, As EPA Permit Looms

The Battle Over Fish Farming In The Open Ocean Heats Up, As EPA Permit Looms 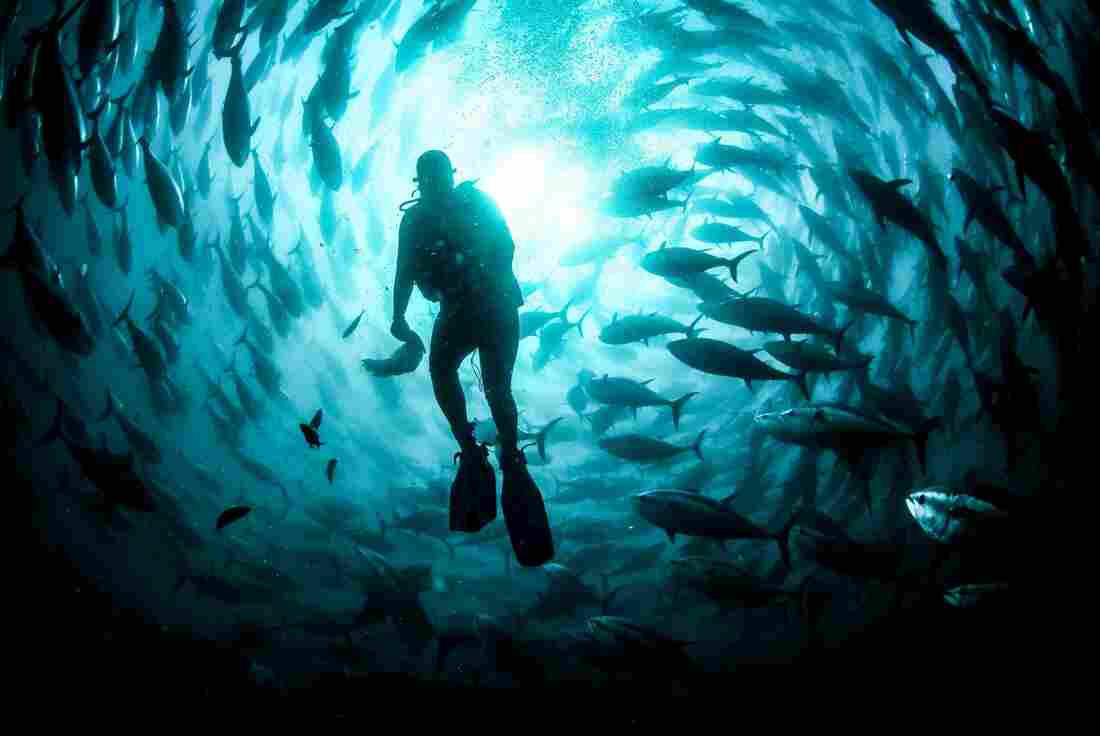 A diver maintains an open-water cage where tuna are being farmed in Izmir, Turkey. In the U.S., federally controlled ocean waters have been off limits to aquaculture, curbing the industry's growth. But the tide may be turning. Mahmut Serdar Alakus/Anadolu Agency/Getty Images hide caption 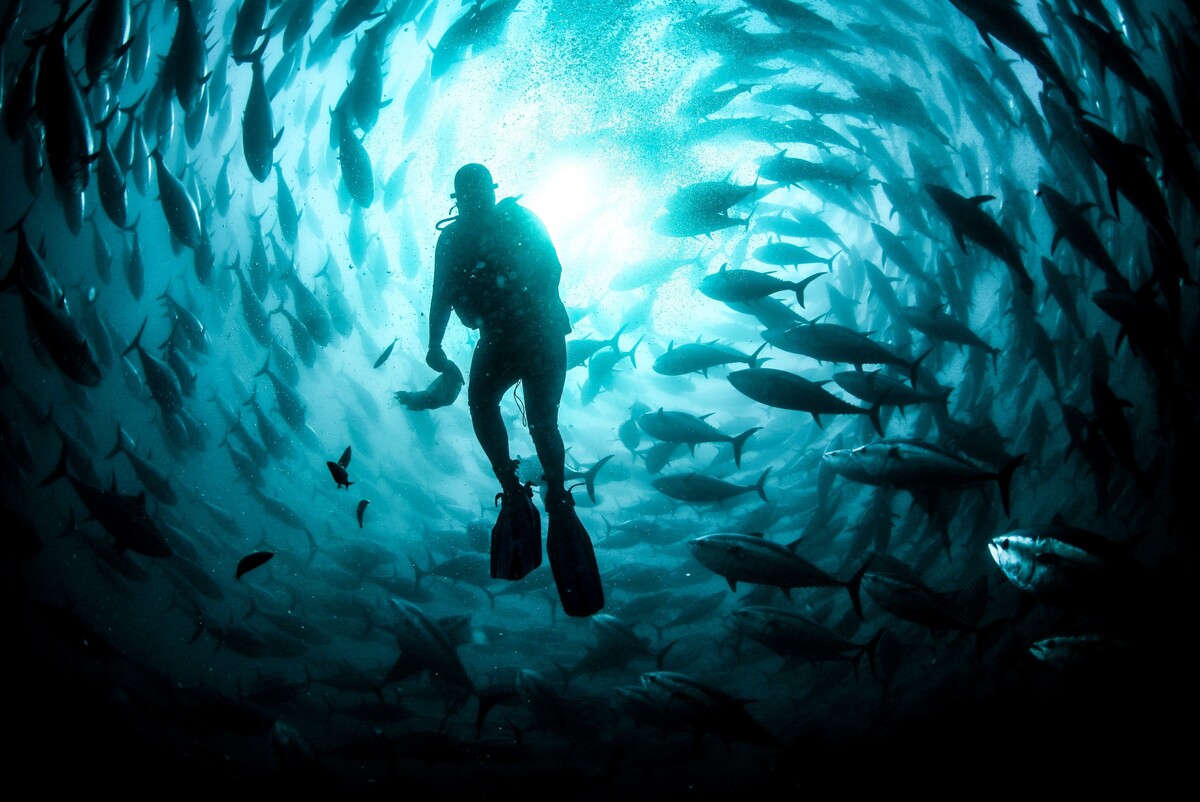 A diver maintains an open-water cage where tuna are being farmed in Izmir, Turkey. In the U.S., federally controlled ocean waters have been off limits to aquaculture, curbing the industry's growth. But the tide may be turning.

Americans eat an average of 16 pounds of fish each year, and that number is growing. But how to meet our demand for fish is a controversial question, one that is entering a new chapter as the Environmental Protection Agency seeks to approve the nation's only aquaculture pen in federal waters.

Fish farming has been positioned by its boosters as a sustainable alternative to wild-caught seafood and an economic driver that would put our oceans to work. So far, restrictions on where aquaculture operations can be located have kept the U.S. industry relatively small. In 2016, domestic aquaculture in state-controlled waters accounted for about $1.6 billion worth of seafood, or about 20 percent of the country's seafood production.

But the biggest potential home for aquaculture, federally controlled ocean waters, has so far been off limits. States control up to three miles offshore from their coastlines, but between three and 200 miles falls under federal control. Attempts to introduce aquaculture in federal waters have so far been stymied by concerns about aquaculture's impact on ocean ecosystems and wild fisheries.

Now the tide could be turning. On Aug. 30, EPA issued a draft permit for a pilot aquaculture project in the Gulf of Mexico off the coast of Florida. The project, despite its small scale, would be a watershed moment in the debate surrounding ocean aquaculture, which has divided environmental groups and pitted fishermen who catch wild fish against those who farm. It is also the latest chapter in a long battle about which agency should regulate ocean aquaculture.

The pilot project would allow Kampachi Farms, a veteran aquaculture company, to raise 20,000 Almaco jack fish in a net pen in the ocean 45 miles southwest of Sarasota. Kampachi Farms previously established aquaculture pens in state-controlled waters off the coast of Hawaii and in Mexico's Gulf of California. Kampachi CEO Neil Anthony Sims says the Gulf of Mexico pilot project is essential to helping aquaculture's critics understand the many upsides of bringing open ocean fish farming to the U.S.

"First and foremost, we want to be able to demonstrate to the Florida fishing and boating community that offshore aquaculture can be a real positive benefit," says Sims. "The handwringing and fear-mongering about the negative impacts has been vastly overblown."

But the many groups that have aligned against offshore aquaculture disagree. They see this project as a precedent-setting act by federal regulators that will move the country closer to opening the oceans, a public resource, to farming.

Rosanna Marie Neil, a policy consultant with the Northwest Atlantic Marine Alliance (NAMA), says the project will "benefit Kampachi Farms and the aquaculture industry at the expense of the health of the ocean and the rights of people along the coast of the Gulf of Mexico who are going to have to deal with the repercussions."

One of those repercussions could be a threat to wild fish stocks, whether by the spread of disease or escaped farmed fish competing for food. Aquaculture operations at full scale also produce an enormous amount of waste, which can result in higher nitrogen and phosphorus concentrations in the water. Those nutrients can cause algae blooms, which choke aquatic environments of oxygen and can lead to higher fish mortality.

EPA's assessment of the proposed Kamapachi Farms pilot project found that it wouldn't create significant waste problems in the surrounding waters. But Neil says that the project's small size means that it may not adequately illustrate the potential damage of an aquaculture operation that was scaled for commercial production.

Along with environmental risks, some worry that bringing aquaculture to the Gulf could push independent fishermen out of business. Acy Cooper, president of the Louisiana Shrimp Association, says that fishermen in his area must catch wild fish by following a careful seasonal schedule of species. If aquaculture took hold in the region and one of those wild species that commercial fishers depend on was being farmed year-round, it could cut into their business.

"This is how we live and survive, through our seafood," Cooper says. "If we allow this to happen and they start to get more aquaculture than catching wild, it shoves us out of the way."

But aquaculture advocates say that farming fish is the only way that the U.S. will be able to keep up with rising demand for seafood. Other countries have already seized on aquaculture as a major source of protein. Nearly half of the world's fish comes from aquaculture operations, the majority of which is raised in China.

"We should be growing aquaculture in America so that we become seafood independent," says Sims. He would have the U.S. build its aquaculture operations in federal waters to the point where we no longer import any seafood at all.

In 2017, the U.S. imported about 90 percent of its seafood supply. Aquaculture proponents often point to this seafood "deficit" as a reason to start farming the ocean. But the U.S. also exported about 84 percent of the domestic catch in 2017, led by salmon, pollack and lobsters. A portion of those exports are processed overseas and eventually return to the U.S. as imports. Research suggests that we're actually consuming more than a third of our domestic catch once those imported products are taken into account, complicating the conversation around a deficit.

Some environmental groups agree that the U.S. should take more steps towards aquaculture. Conservation International and the Environmental Defense Fund are strategic partners in a fund that is invested in Kampachi Farms. In a May report co-authored with an investment firm, the Nature Conservancy called aquaculture a "compelling investment opportunity with meaningful impact."

Who should regulate ocean aquaculture has always been a murky question. The National Oceanic and Atmospheric Administration moved to approve several aquaculture operations in the Gulf of Mexico in 2016, but a legal challenge stopped that effort last September. A federal court found that the agency didn't have authority under the Magnuson-Stevens Fishery Conservation and Management Act, the nation's primary fisheries management law, to approve aquaculture operations. NOAA has appealed the ruling.

In the meantime, EPA issued the draft permit for the Kampachi Farms pilot project in August under the authority of the Clean Water Act. NAMA's Neil says that the lack of clarity around who regulates aquaculture is an opening for Congress to act.

Legislators need to "set the record straight and say that unless it's expressly authorized by Congress, commercial aquaculture operations are not permitted in federal waters," she says.

She points to the Keep Finfish Free Act, a bill introduced in May by Republican Rep. Don Young of Alaska, one of the architects of the Magnuson-Stevens Act, which would prohibit federal officials from authorizing aquaculture operations in federal waters unless Congress writes a law permitting it.

But Congress is divided on the next steps for aquaculture. A bill introduced in 2018 by Mississippi Republican Sen. Roger Wicker, and supported by the aquaculture industry, would have allowed the expansion of aquaculture into federal waters and established a permitting process at NOAA. The bill never went to a vote and has not been reintroduced.

Aquaculture's skeptics say that now is the time to move slowly on fish farming, before the industry has a foothold. "It's much easier to take a look at an industry and see whether you want it or not before it gets started," says Hallie Templeton, senior oceans campaigner at Friends of the Earth. "What's another five years? We're leaders in ocean stewardship right now."

EPA is accepting public comments on the Kampachi Farms pilot project until Sept. 29. If the project moves ahead, it could be the next step toward bringing aquaculture to the U.S. in earnest.