Accessibility links
Foraging Is Part Of Swedish Identity; Now Its Countryside Is The Wildest Restaurant : The Salt The government recruited Michelin-starred chefs to craft recipes from ingredients that can be foraged at sites across the Swedish countryside. Diners book a table, show up and hunt for their own food. 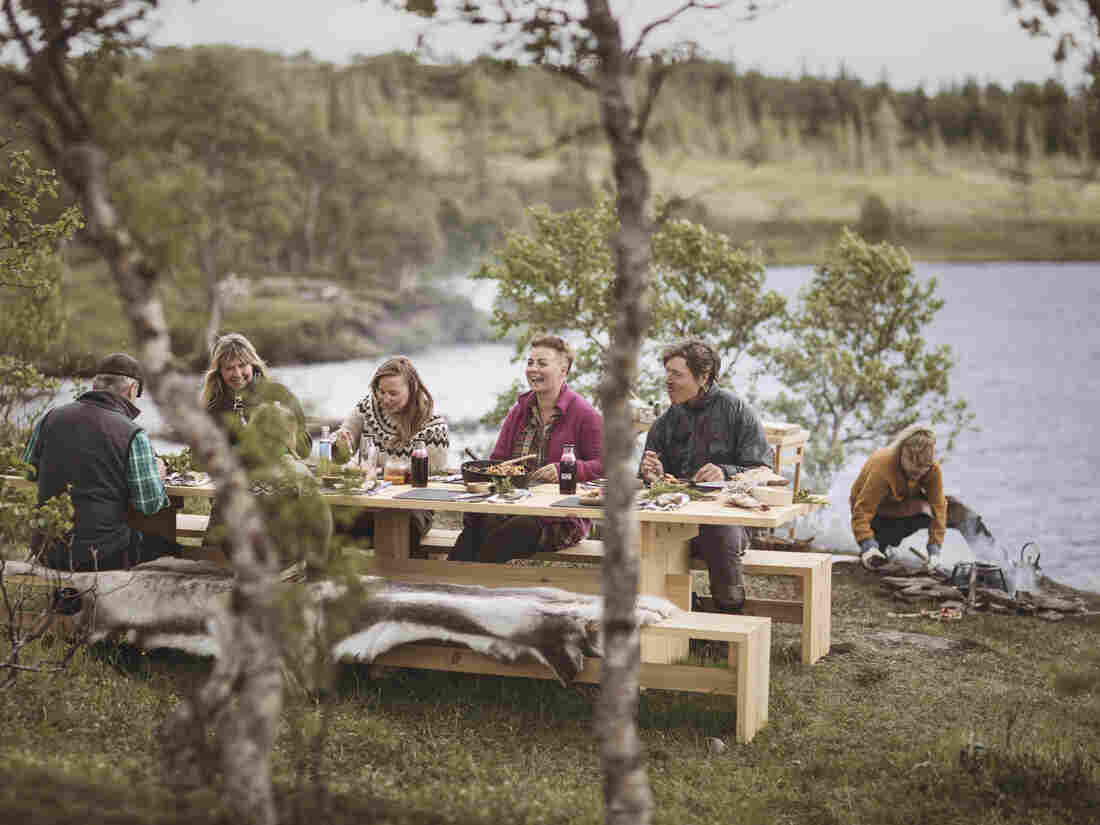 A Swedish government program called the Edible Country recruited Michelin-starred chefs to create recipes that use ingredients that can be foraged from the areas around 13 picnic tables scattered across the countryside. Diners book a table, show up and hunt for their own food.

Swedes' dreams are made of this: In the spring, four Michelin-starred Swedish chefs were recruited by their government to create restaurant-quality recipes that use ingredients that can be foraged from the areas around 13 picnic tables scattered across the Swedish countryside.

The result is the Edible Country, which has billed itself as "the world's largest restaurant." The idea: diners book a table, then show up and forage for the ingredients they'll need in order to prepare — for themselves — one of the recipes concocted by the top chefs. For a fee, diners can also hire a chef to make the meals for them. Think of it as fine dining's version of glamping.

The Edible Country has served more than 1,000 diners since its debut on May 1. Some tables have been booked almost nonstop. Although it will close for the season on Sept. 30, the program, originally planned as one time only, has been renewed for next spring, and organizers are debating staying partially open this winter with ice fishing.

What might sound like a gimmick is actually a daring reassertion of Swedish heritage. Allemansrätten — literally, "everyone's right" — guarantees Swedes the right to roam in the countryside, forage and pitch a tent anywhere for up to two nights (as long as it's at least 230 feet from a home or farm). Fäviken, a celebrated 24-seat, brick-and-mortar foraging restaurant on 20,000 acres of Swedish farmland, is closing in December so its chef, Magnus Nilsson, can pursue gardening.

Swedes' deeply rooted cultural outdoorsiness begins with Skogsmulle sessions, a rite of passage for Swedish children in which they are sent into the forest with an adult dressed as a benevolent troll who teaches them respect for plants, animals and the circle of life. As adults, they return to sommarstugor, Swedish family summer homes, to celebrate midsommar, a solstice holiday. The gestalt power of these traditions goes a spiritual dimension beyond summer camp, scouting merit badges or Patagonia-fleeced weekend warriors. The Swedish soul is wedded to wilderness.

How do you feed such a spirit?

"It's important to fight food anonymity. It has an identity and an integrity," said Lisen Sundgren, a decades-long herbalist at Rosendals Trådgård, Stockholm's ancient royal hunting grounds, which were converted to Sweden's first gardening school, operating from 1862 to 1911 and now offering a range of biodynamic farming experiences. "I laugh at how much effort people have wasted trying to get rid of it," she said while picking dandelions, pineapple weed and yarrow on a recent Thursday morning. "Stir-fry it with butter, and have a dandelion-bud frittata." (As a struggling actress in New York decades ago, Sundgren would forage in Central Park.) Outdoorsiness and foraging are a major part of Swedish culture.

At Foodstock, a Swedish naturalist food festival unrelated to the Edible Country that debuted this year on one of the more remote of Stockholm's 14 core islands, Niki Sjölund plucked rowanberries in a foraging class as he mused: "So much of foraging is healthy because it comes from herbal medicine." (Three tiny rowanberries provide a day's recommended dose of vitamin C.) Foraging has been baked into the Swedish psyche at least since the famine-ravaged Storsvagåret, "The Year of Great Weakness," in 1867 — it's known as Lavåret ("The Lichen Year") in some parts of Sweden because lichen was used to make bark bread.

While workers at Eataly World, the Italian food theme park in Bologna, place truffles in the ground daily to prevent tourists' disappointment on truffle hunts, such performance is anathema to Swedish outdoorsiness, although Edible Country diners are not quite thrown to the wolves.

Basic table bookings are free, but it's strongly recommended that diners buy a $15 cooking kit that includes plates, cups, cutlery, tongs, a small gas stove, a lighter, a coffeepot and other necessities — notably, salt, pepper and butter. A foraging guide can also be hired at varying rates — for example, roughly $240 for two hours at the table on Utö, a small island in Stockholm's vast archipelago (worth it to avoid poisonous mushrooms). Table settings can be preset, sometimes with reindeer pelts warming the benches, and a chef can be hired (although not the four Michelin-starred chefs, who have largely handed the project over to other chefs). Vegetarian options are available, and either way, most of the recipes are gluten free, if not glutton free.

Far-flung locales are cheaper: The Kittelfältet table at Värmland offers its forager and chef for a total of about $110. The Ramsvik table in western Sweden offers a basket of local ingredients with its cooking kit at no extra cost. Like with camping, experiences (and tastes) can range from rustic to pampered. For what it's worth, money collected from diners goes to regional subcontractors who actually execute the program. (The Swedish government is renowned, but has its limits.)

"How would it be to run a restaurant in nature? We do it in city restaurants, we serve it, but it's terroir with an urban glaze," said Jacob Holmström, one of the Edible Country's chefs. "Maybe you don't need an induction stove or low-tempering baths or fancy-pants things, because the enhancement is the rawness of nature itself."

Anton Bjuhr, Holmström's cooking partner at Gastrologik, a Michelin-starred restaurant in Stockholm, agreed: "I believe in working with what you have, where you are," he said as he cooked hönökaka bread over an open fire at Foodstock. "It's the energy of feeling connected to the cycles of nature. It feeds creativity and inspiration as much as your belly. It's the confidence of growing into your beliefs, your culture, yourself."

That's all well and good, but how does it taste? Foraged nässelsoppa, a popular stinging nettle soup, seasoned with a Swedish version of dukkah — blueberries, juniper berries, oregano, pigweed, plantain — had the sharp pulpy heft of a kale smoothie warmed to coziness. A glass of crystal-clear chilled birch sap was as subtly sweet as liquid kisses.

While Scandinavian countries have performed well in prestigious industry contests of technical proficiency, translating that prowess to commercial dining success has been difficult. (Sweden got its first three-star Michelin spot only last year.) The world's most famous Swedish chef, Marcus Samuelsson, is often celebrated more for his cosmopolitanism than his Swedishness. (He's also Ethiopian.) Historically, diners have been slow to embrace Scandinavian cooking — especially Swedish cuisine. That antiquated bias weakened under the mighty reign of Noma, the Copenhagen-based four-time winner of the title of the world's best restaurant. (The name is a portmanteau of the Danish words for "Nordic food.") The Edible Country is essentially fine dining's riff on glamping — experiences (and tastes) can range from rustic to pampered.

"People confused us with Switzerland. I never thought anything Scandinavian would make it into the global conversation," said Niklas Ekstedt, another of the Edible Country's Michelin chefs, who also co-founded Foodstock. "A lot of people are provocative about Scandinavia as a la-la land because health care and paternity leave are obvious to us. So is foraging. In the north, where I'm from, you can't buy mushrooms or game in shops, but everyone has it at home because it is foraged. Fermenting and picking berries is something my mom does."

Yet Edible Country diners aren't Arctic Robinson Crusoes. Some dishes require diners to bring their own sour cream or yogurt. The Ramsvik site suggests buying crawfish or prawns. But there is a Crusoe-like vulnerability and fragility to the experience. Fishing for herring, perch or salmon doesn't require a permit but does require luck. Offerings change month to month — wild raspberries peak in July, for example — and rain-or-shine parameters can be shifted by drought, flood or frost in ways that don't disturb reservations at Swedish culinary temples like Oaxen or Volt.

To Swedes, sustainability is better than a two-way street. It's an open meadow: Their promise not to pillage nature is met by nature's on-balance assurance of providence. It's wound up in the Swedish concept of lagom — just enough. What would be the point of plucking more wild garlic than you need? "It's funny to hear these foodie trends of local, organic, sustainable, wild food," said Sjölund. "These trends are just catching up to our traditions."