Accessibility links
We're Pulling Tuna Out Of The Ocean At Unprecedented — And Unsustainable — Rates : The Salt A new study finds that tuna harvests, including of some species considered "vulnerable," have increased by an astonishing 1,000% in the last 60 years — a rate some scientists warn is unsustainable. 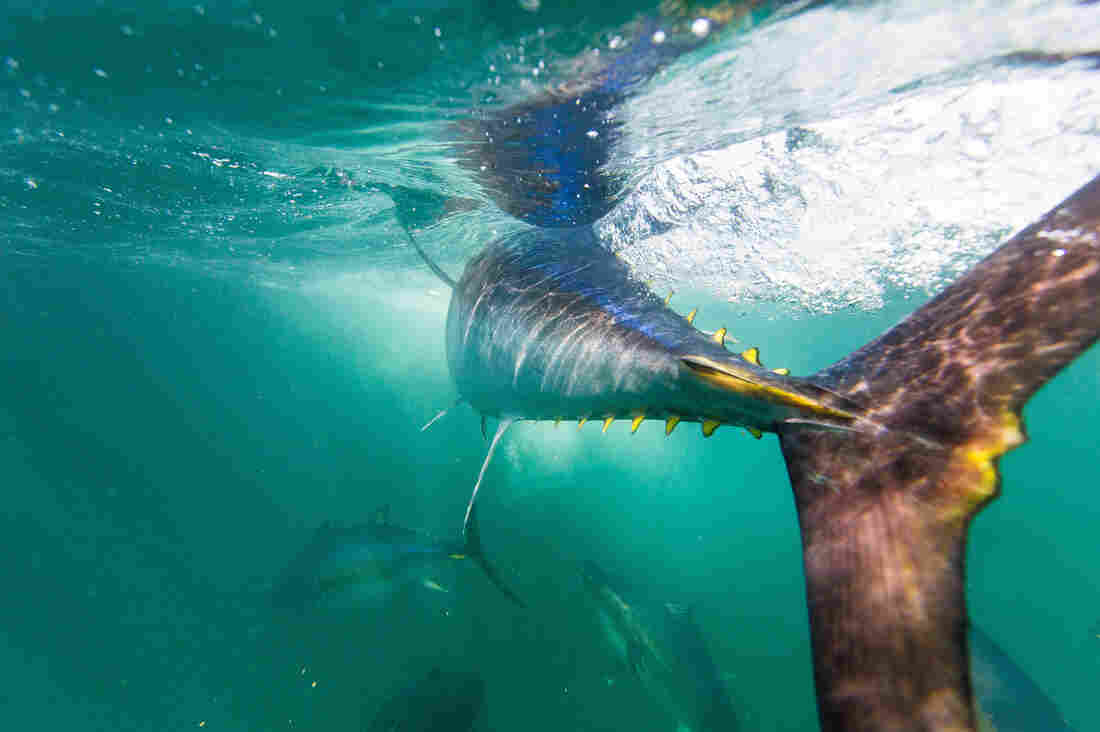 A new study finds that tuna harvests, including of some species considered "vulnerable," have increased by an astonishing 1,000% in the last 60 years — a rate that some scientists warn is unsustainable. NiCK/Getty Images hide caption 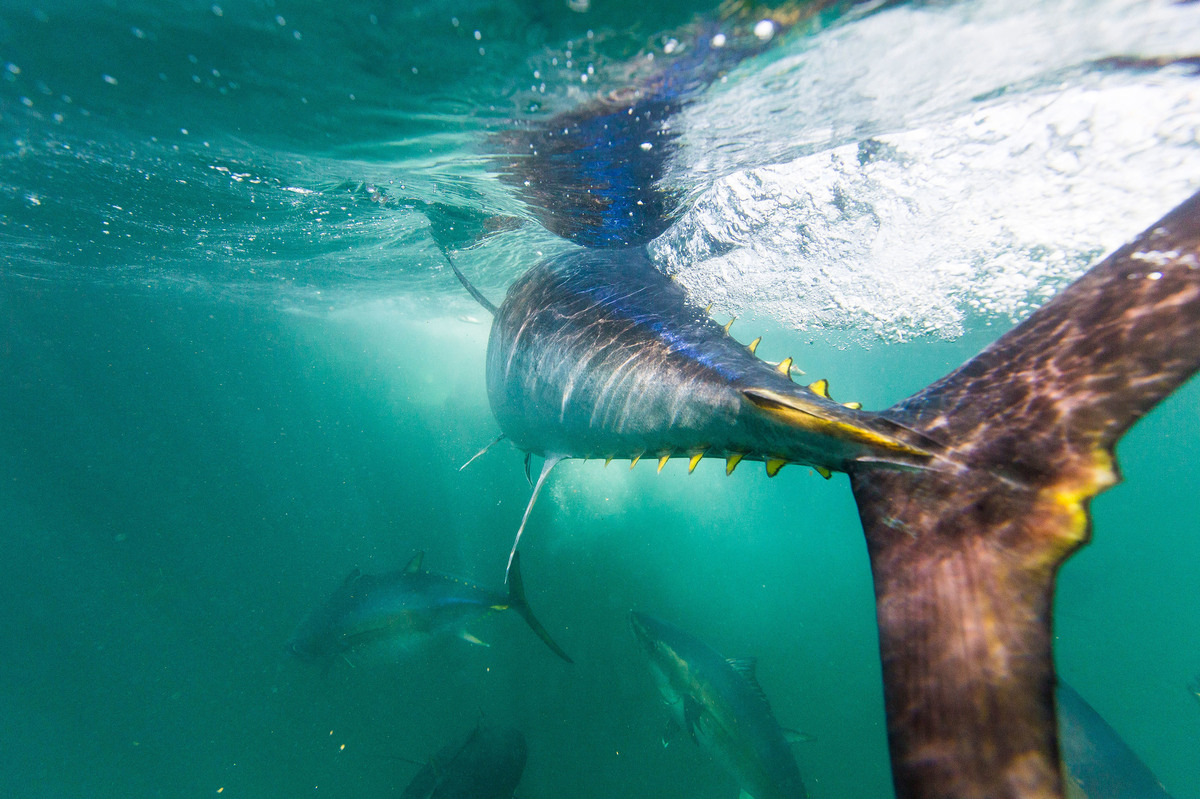 A new study finds that tuna harvests, including of some species considered "vulnerable," have increased by an astonishing 1,000% in the last 60 years — a rate that some scientists warn is unsustainable.

If you're in the mood for a tuna poke bowl or an old-school tuna niçoise salad, here's a tip: Don't hit up the Greenhouse Tavern in Cleveland. It has been nearly six years since chef Jonathon Sawyer became a "tuna evangelist" after attending a meeting of like-minded chefs at the Monterey Bay Aquarium. It was there that he made the decision to forgo tuna — both in his personal life and on the menus at all four of his restaurants.

It wasn't always easy. Turning down the chance to eat famed chef Eric Ripert's mouthwatering thin-sliced tuna over a foie gras torchon took some Superman-like strength, but for Sawyer, the mission is an important one. He's not trying to get people to give up tuna altogether. Rather, he's trying to raise awareness of the sheer quantities that are coming across our collective plates and serve as a gentle warning that all that fish is coming from a limited resource.

It turns out that his effort is hitting a seafood sustainability bull's-eye.

A new study, published in Fisheries Research, reveals that the sheer amount of tuna being taken from our seas, including some species considered "vulnerable," has increased by an astonishing 1,000% in the last 60 years — a rate that some scientists are saying is unsustainable.

The study, which looked only at larger industrial catches, says we're pulling nearly 6 million metric tons of tuna from the oceans each year. (The U.N.'s Food and Agriculture Organization's data — which include artisanal fisheries as well as industrial catches — estimate that the overall annual harvest is closer to 7.4 million metric tons of tuna.)

Of that, skipjack (which typically ends up as canned tuna) now accounts for nearly half of the world's entire tuna catch, followed by yellowfin tuna, which comes in at just under a quarter of the global tuna haul. The study's findings suggest that current public reporting efforts to accurately document the extent of the world's tuna catch have been insufficient and could be affecting fisheries management decision-making.

"The big surprise for me was how much [southern] bluefin tuna had declined," says lead author Angie Coulter, who conducted the research while working with the Sea Around Us initiative at the University of British Columbia's Institute for the Oceans and Fisheries. The historical decrease in southern bluefin tuna populations is eye-popping. In the 1960s, southern bluefin tuna from the Indian Ocean accounted for 36% of tuna catches there. Today, it has fallen to less than 1% of the catch.

The study shows that not only are we taking more tuna from the oceans than ever before, but we're also harvesting them farther from shore. Industrial tuna fishing now covers somewhere between 55% and 90% of the global oceans, fueled in part by extensive government subsidies.

"Everywhere tuna swim, they're being pursued by industrial fisheries," says Shana Miller, who directs the Global Tuna Conservation Project at the Ocean Foundation and was not involved in the new study. "That's a major take from this paper."

Indeed, according to the study, no new fishing grounds remain to be explored, and precisely where tuna is being harvested has also shifted in dramatic ways. In the 1950s, tuna fishing was concentrated off the coasts of North and Central America in the eastern Pacific Ocean and around western Pacific islands. Little industrial tuna fishing was taking place in the Atlantic or Indian oceans. Today it is "ubiquitous across all tropical and subtropical regions of the world," though most — nearly 70% of the world's tuna catches — are taken from the Pacific Ocean.

Miller says shining a spotlight on just how big that shift has been may end up putting added pressure on the regional fisheries management organizations responsible for managing tuna stocks and could ultimately help in ensuring the future sustainability of those tuna fisheries.

"Also, that skipjack tunas dominate the catch at 50% of tunas [and all other fish looked at in the study] is shocking," Miller says. "They're healthy in all oceans for now, but their increasing catches are concerning for the future."

The report also draws attention to the amount of bycatch taken in the pursuit of tuna. The study estimates that just under 6 million metric tons of shark were discarded as bycatch between 1950 and 2016 in the Pacific Ocean alone. Much of that was made up of blue sharks, which take many years to mature and produce few offspring.

"There's been an incredible push to end dolphin bycatch in tuna fisheries because they're cute," says Coulter. "But sharks are apex predators. They hold all these food chains together. If we're removing these sharks [from the ecosystem], they really can't catch up and will decline more and more."

So what does all this mean for tuna fans? If chef Sawyer has his way, more of us would be open to spreading our seafood choices across a wider variety of tasty species to help ease some of the pressure on tuna. Coulter says even being more aware of exactly where our tuna is coming from is a good first step.

"Do the best you can. No one single person is going to solve any of these things, but being vocal and pushing governments to release more data is a start. More data is better. We can make better decisions if we have the data to work with," she says. "And if you want to make a change, find an NGO that's doing great work that you align with and contribute."