Accessibility links
How The Trade War Crushed A Growing Chinese Market For U.S. Cranberries : The Salt The U.S. has spent millions to get China to embrace the unknown fruit — and it did. Now, tariffs have driven China to buy its cranberries from other countries, leaving U.S. farmers in the lurch. 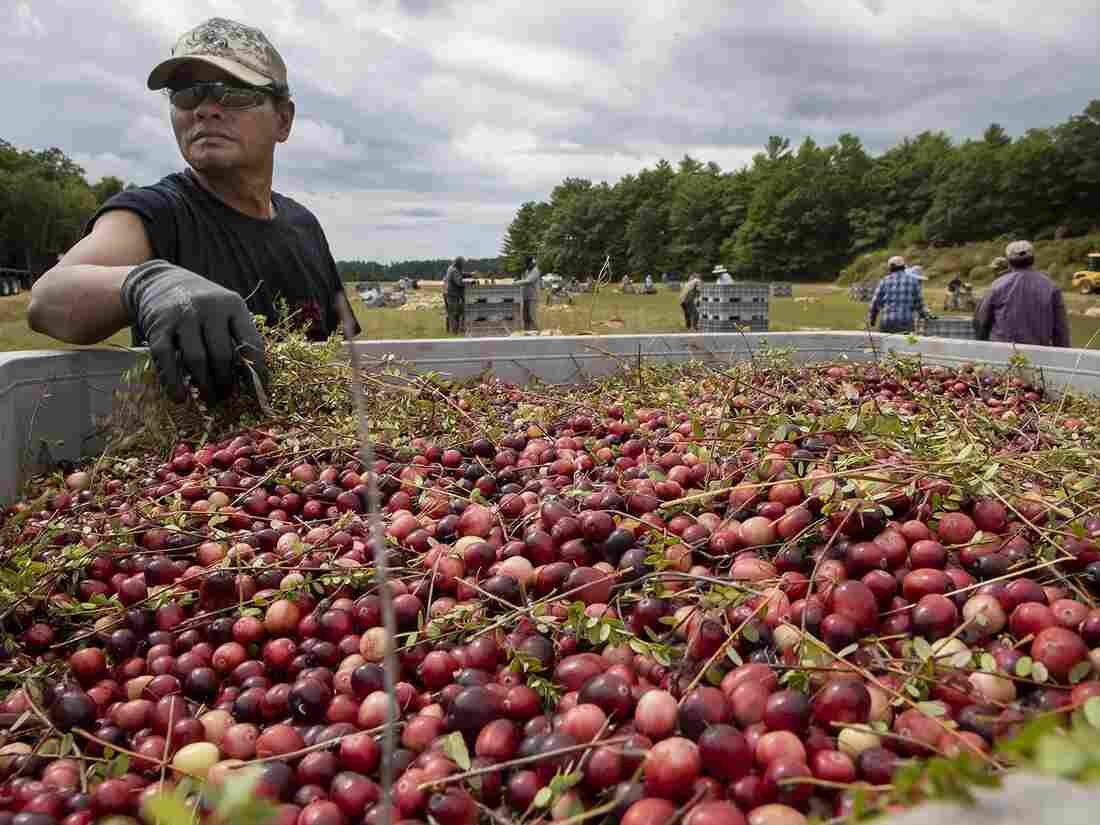 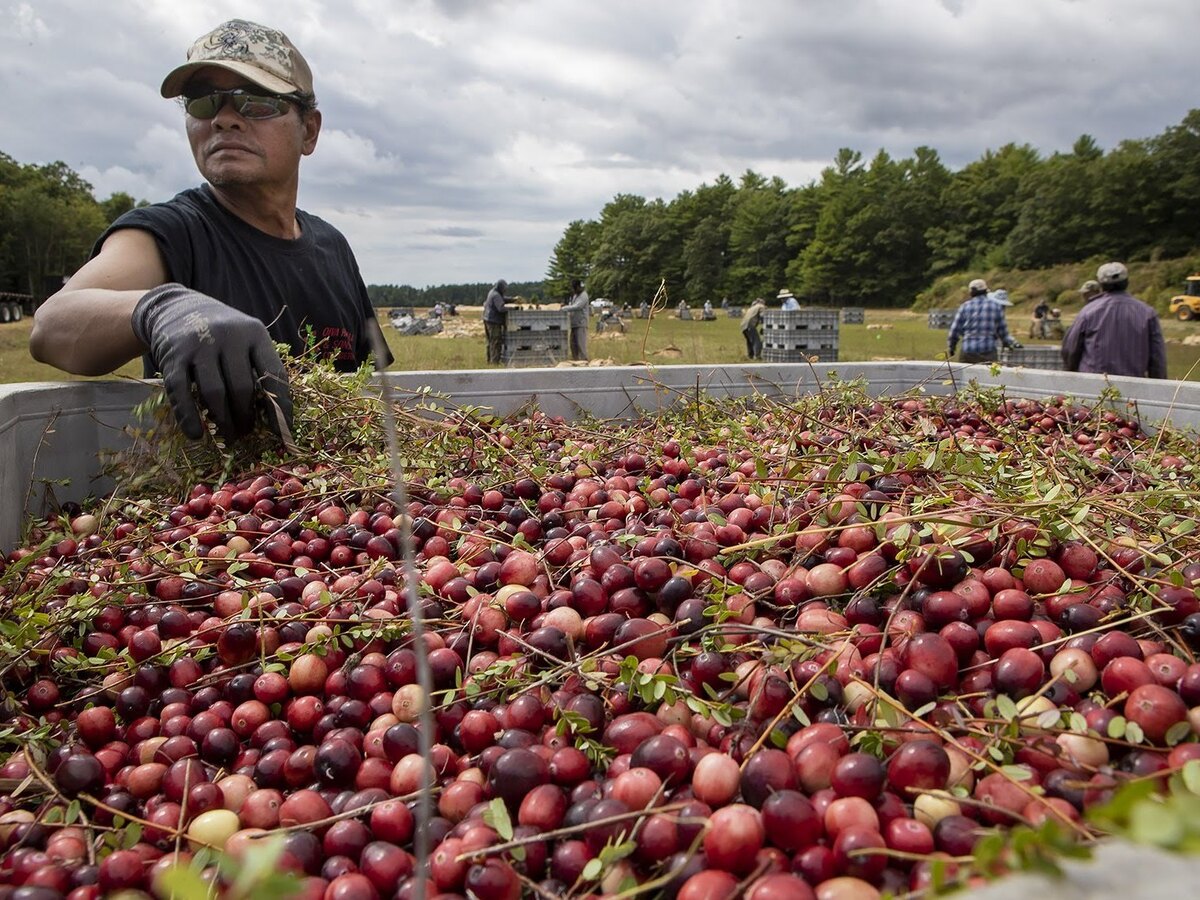 A worker at a bog owned by Massachusetts-based Decas Cranberry Products, Inc., removes vines from a batch of just-harvested berries.

Cranberry producers in Massachusetts, and around the country, are slowly drowning in surplus fruit.

For years, harvests in the three major cranberry-producing countries — the United States, Canada and Chile — have swelled, while many consumers have turned away from sugary beverages like cranberry juice. As a result, the global supply of cranberries has outgrown demand, and many Bay State growers have been pushed to the brink of failure.

"We're in what I think is a really tough spot right now," said Dom Fernandes, a third-generation cranberry grower in Carver, Mass. His company, Fresh Meadows Farm, is struggling to break even.

"I would've loved to have seen this farm stay in our family for another generation, and I'm not optimistic about that," he said.

If things don't turn around soon, Fernandes expects his family won't be the only one looking to leave the industry.

To make matters worse, the ongoing trade war between Washington, D.C., and Beijing has put a tight squeeze on international cranberry sales.

As the Trump administration prepares for a new round of trade talks, Chinese tariffs on American cranberries remain in place, adding to the economic pain growers are feeling.

However, the makings of the current cranberry glut were visible as early as 2012. And it was around that time that the industry, in search of new customers, focused its marketing muscle on China. The bet was that the world's most populous country might just be big enough to soak up that excess fruit.

But there was a little problem: Most Chinese consumers had no idea what a cranberry was.

At the 2019 International Fruit Expo, held this summer in the sprawling southeastern city of Guangzhou, the smell of opportunity was in the air. Or maybe it was the aroma of durian, the famously pungent fruit that its haters — and even many of its lovers — say smells like gym socks.

For three days, the convention hall was transformed into a sort of indoor marketplace, with vendors from dozens of different countries beckoning passersby to their stalls with trays of chopped fruit. Among the goods: Vietnamese durian, Iranian figs, Taiwanese pineapple and Indonesian snakeskin fruit (which, if you're wondering, looks like a pear injected with python DNA; the booth that sold it had run out before this reporter could find out how it tastes).

For any business trying to get a foothold in China's $7 billion imported fruit market, trade shows like this one are a chance to introduce products to new taste buds and, hopefully, find an importer who can provide a gateway into the world's second-largest economy.

"In terms of market size, definitely all the producers want to come here," said Pablo Aguayo, who was there to promote Mexican produce.

"The Chinese people are buying!" exclaimed the vendor, Daddu Raman, who said he'd been collecting business cards from various importers.

There is a palpable sense that if you can sell into China, it can change your business fortunes in a big way. That's why the U.S. cranberry industry has spent millions of dollars marketing in China over the past several years: to get people to try, and maybe even love, the little red fruit.

In 2013, Massachusetts-based Ocean Spray, which claims to supply 65% of the world's cranberries, hired the agency to help raise its profile in China. When the firm conducted a survey of Chinese consumers, more than 95% said they did not know what cranberries were. 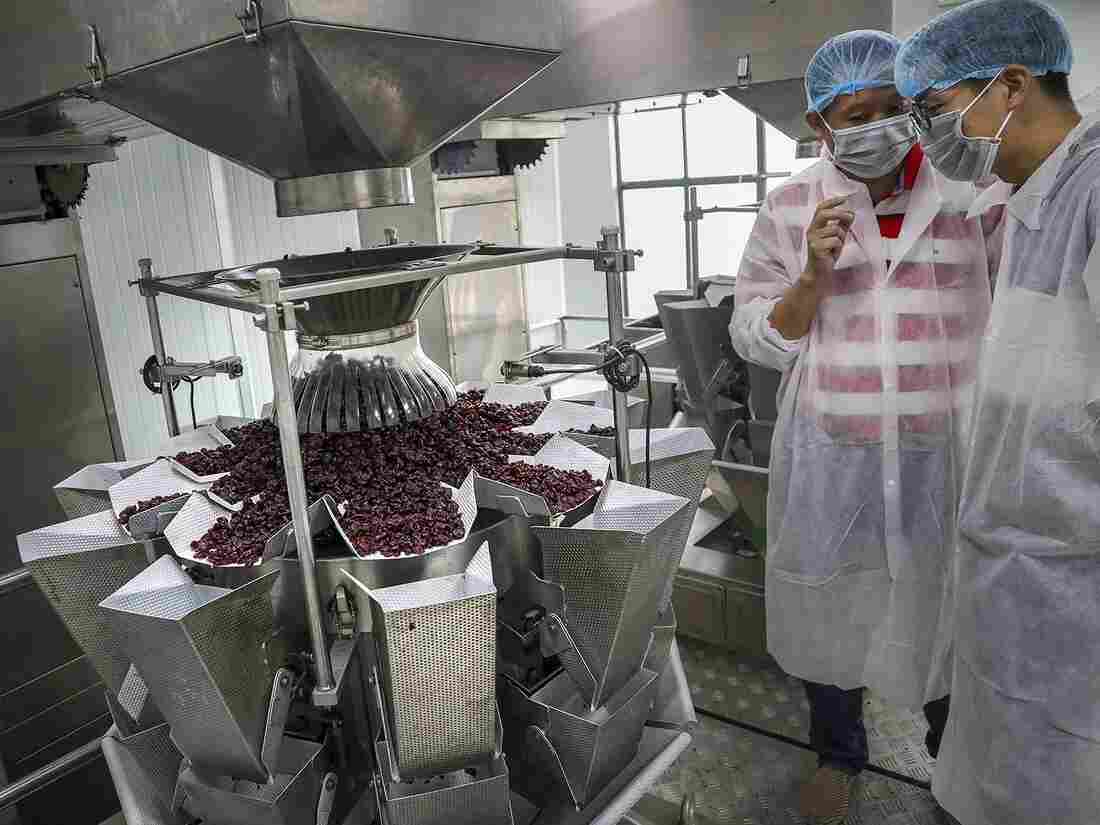 At Karat Farm's manufacturing facility in Taicang, the company takes tons of fruit and repackages it for resale in China. At its peak, the company will process about 2,000 pounds of dried U.S. cranberries per day. Adrian Ma/WBUR hide caption 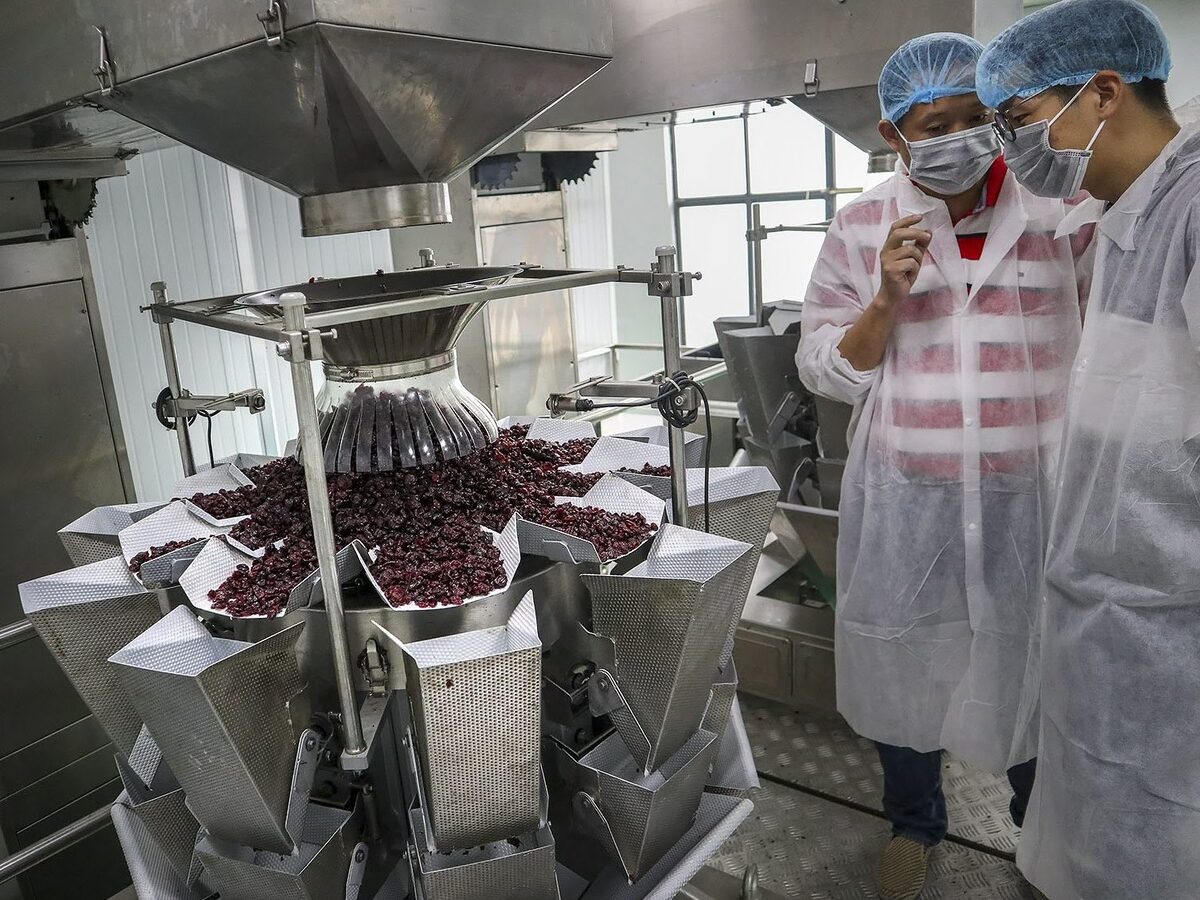 At Karat Farm's manufacturing facility in Taicang, the company takes tons of fruit and repackages it for resale in China. At its peak, the company will process about 2,000 pounds of dried U.S. cranberries per day.

Beyond the staples of marketing, like trade shows and tasting events, Lee's team devised strategies that would become part of the company's China playbook: pushing the product on giant e-commerce sites like Alibaba, wining and dining editors from food and lifestyle publications, and even flying social media influencers out to a Massachusetts bog to experience the cranberry harvest in person.

"These influencers brought their own cameras and live-streamed the whole process to their followers," Lee said. "And these followers, they were tweeting all about it because it was something very curious."

Lee's team also played up the cranberry's connection to Thanksgiving. In one promotional video produced for Ocean Spray, a young Chinese woman has Thanksgiving dinner with a Massachusetts family. Spliced in with shots of people cooking and eating were, of course, lots of images of cranberries being mixed into various dishes.

"The whole atmosphere of family gathering together, you know, having a feast, watching football ... kids running around, resonates very well with Chinese culture," Lee said. "This is what we do in Chinese New Year."

In addition to Ocean Spray, there was another group trying to promote cranberries in China: a quasi-governmental agency called the Cranberry Marketing Committee. Since 2014, the U.S. group has spent roughly $1 million every year just on marketing in China. Some of that money has gone toward paying restaurants to put cranberry-themed dishes on the menu and hiring chefs to create recipes.

All of these marketing efforts were heavily aimed at younger women from large cities like Beijing and Shanghai, a demographic that, according to Lee, is not only influential, but also open to trying new things — like a tart, shriveled, little-known fruit from the other side of the planet.

So, did this multi-front marketing blitz actually work? The answer, according to U.S. export data, is a definite "yes."

Between 2013 and 2018, sales of dried cranberries to China increased by over 1,000%. In 2018, China bought nearly $55 million worth of the fruit, making it that year's biggest spender on U.S. dried cranberries.

A lot of those berries wind up in the typical places, like muffins or trail mix. But increasingly, sweetened dried cranberries have been popping up in some classic Chinese foods such as lù dòu gāo, a slightly sweet pastry made from mung beans. With exports soaring, it seemed the cranberry had finally taken root in China.

Then, of course, the trade war happened.

On July 6, 2018, the White House approved tariffs on $50 billion worth of Chinese goods. Chinese trade authorities immediately retaliated with tariffs on dozens of U.S. goods, including dried cranberries, for which China's Ministry of Commerce raised an existing tariff from 15% to 40%.

"That's frustrating," said Brian Wick, executive director of the Cape Cod Cranberry Growers' Association. "The metaphor that I have in my mind is the track meet. You're running your race ... you're building up speed and you're really doing good ... and then someone says, 'Well, let's drag some hurdles out now. You gotta jump over these hurdles.' "

How the trade war squeezes sales to China

President Trump insists the trade war will eventually pay off for American agriculture. However, the latest export data show that many Chinese businesses have already cut off ties with their U.S. cranberry suppliers.

About an hour's drive north of Shanghai, in the city of Taicang, there's a warehouse filled wall-to-wall with pallets of imported dried foods, including almonds, raisins, plums and blueberries.

The warehouse belongs to Karat Farm, a company that buys fruit by the ton and divides it up for resale in China. Min Xiaoguang, Karat's general manager, who also goes by Greg Min, says the top-seller is dried cranberries.

In a room down the hall, plastic bins full of dried cranberries are dumped into a big machine and funneled into little resealable bags that will end up in a baking aisle somewhere in China. On the front of each bag is a round American flag seal with the words "Grown in the USA."

"I think America's cranberry, the quality is the highest," Min says. But now that he's paying a 40% import tax, his profits have taken a hit.

"I just want the trade war [to] end quickly," Min said. "I hope so. Otherwise, we have to choose another country's cranberry." 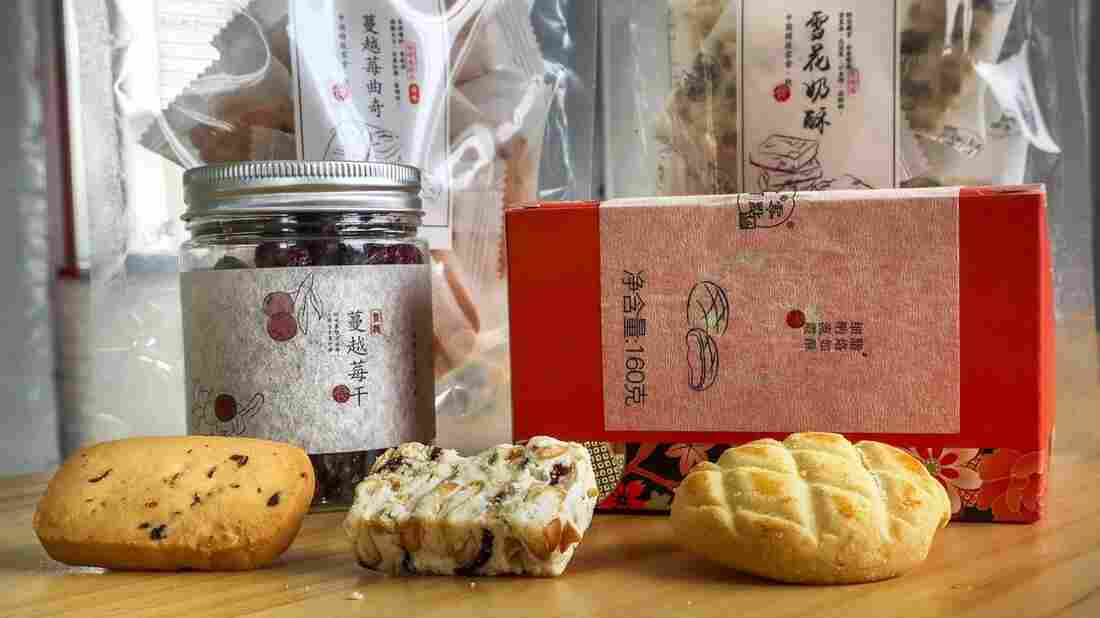 Various cranberry-flavored snacks made by Shanghai Bouquet Food Co. The company used to buy about 300 to 400 tons of American dried cranberries each year. But after Chinese trade authorities raised the tariff on U.S. cranberries, Bouquet switched to Canadian berries. Adrian Ma/WBUR hide caption 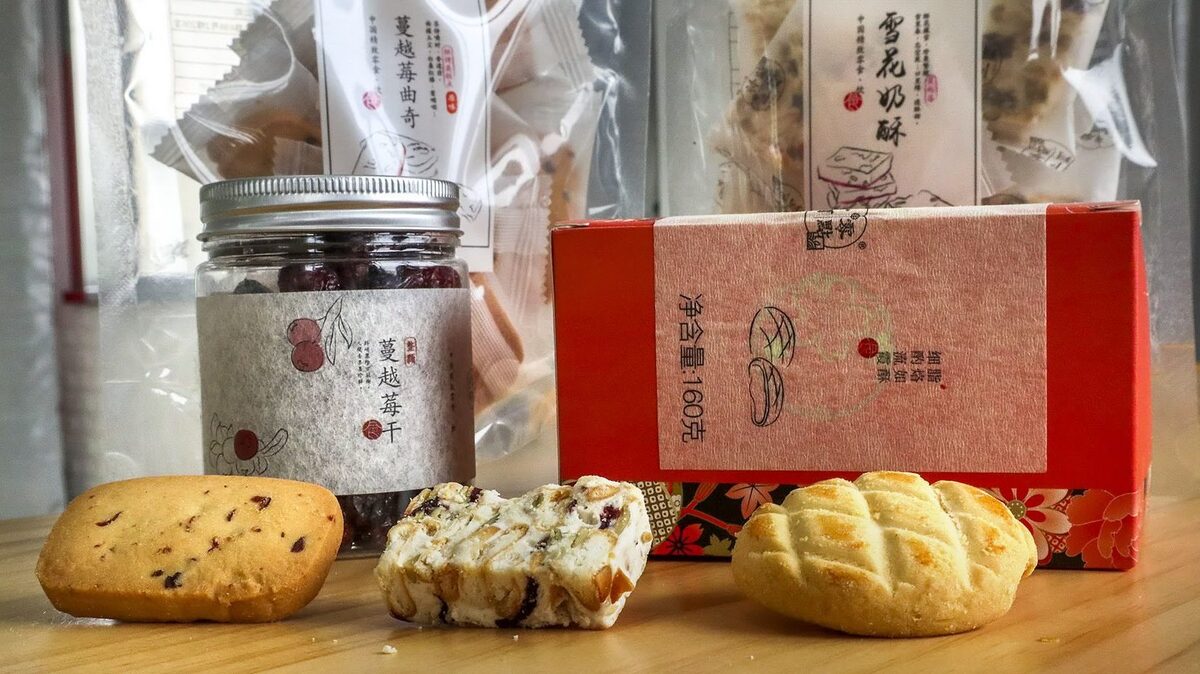 Various cranberry-flavored snacks made by Shanghai Bouquet Food Co. The company used to buy about 300 to 400 tons of American dried cranberries each year. But after Chinese trade authorities raised the tariff on U.S. cranberries, Bouquet switched to Canadian berries.

Although Min likes his current American supplier, he says it would be cheaper for him to buy from Canada or Chile, the two other major cranberry producers.

A few miles away, in another part of Taicang, a snack manufacturer called Shanghai Bouquet Food Company has already made the switch.

A few years ago, Bouquet launched its first cranberry-flavored treat: a nougat-like, Taiwanese-style cookie called a snowflake crisp, studded with dried cranberries. The product was a hit with customers, so the company launched more cranberry-based snacks: a cranberry shortbread cookie, dried cranberries with mixed nuts, and a cookie filled with a cranberry-mango paste.

According to the company's purchasing manager, Dou Lin, Bouquet bought about 300 to 400 tons of dried cranberries from the U.S. last year. But this year?

"I'm ordering everything from Canada because the U.S. price is too high," she said.

And a lot of other Chinese companies have made the same call. U.S. export data show cranberry sales to China during the first-half of 2019 were 45% lower than sales during first-half of 2018, before the Chinese tariffs on U.S. cranberries went into effect. That was after several years of continuous growth.

"The growth was not only halted, but it was also essentially reversed," said Terry Humfeld, executive director of a trade group called The Cranberry Institute.

Humfeld said many growers have received payments from the USDA as part of a program to help farmers whose sales are being hurt by tariffs. This year the USDA gave the Cranberry Marketing Committee over $3 million to promote the fruit, not just in China, but also in other markets, such as India, where the cranberry is still relatively unknown.

While the industry appreciates the help, Humfeld said, these are short-term fixes to a trade war that could do long-term damage.

"The longer this retaliatory tariff situation goes on, the more difficult and costly it's going to be to reverse that negative sales trend," he said.

Dou of Bouquet Foods says she doesn't regret her decision to switch to Canadian berries. But she's also aware it may add to the difficulties that American cranberry growers are experiencing.

"It's really sad what's happening to the farmers," she said, "because in this situation, there isn't much they can control."

This report was made possible through the International Center for Journalists' Bringing Home the World fellowship. Adrian Ma is a reporter for WBUR's Bostonomix team.