Accessibility links
Teal Pumpkins: Safe Trick-Or-Treating For Kids With Food Allergies : The Salt In addition to handing out candy, places that display teal pumpkins also give out non-food items such as glow sticks or stickers. The movement took off quickly on social media and continues to grow. 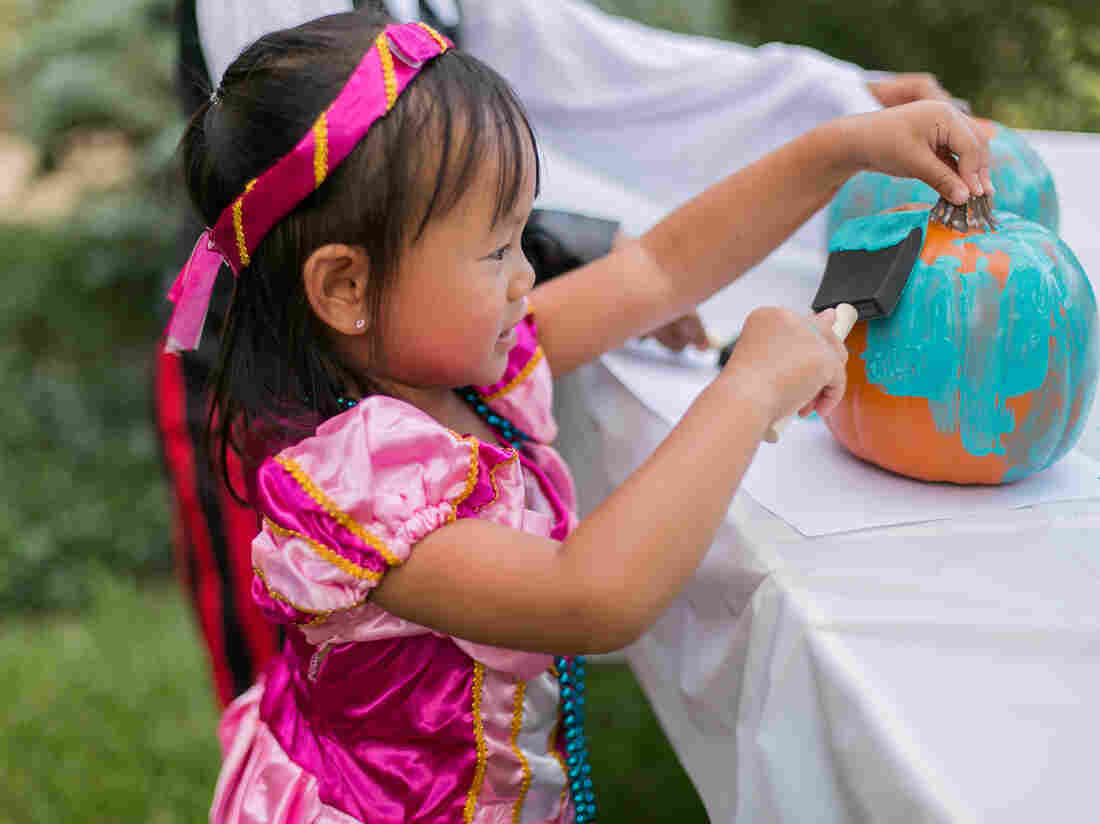 A young girl paints a pumpkin teal to signify that a place is safe for children with food allergies to go trick-or-treating. Courtesy of Food Allergy Research & Education hide caption 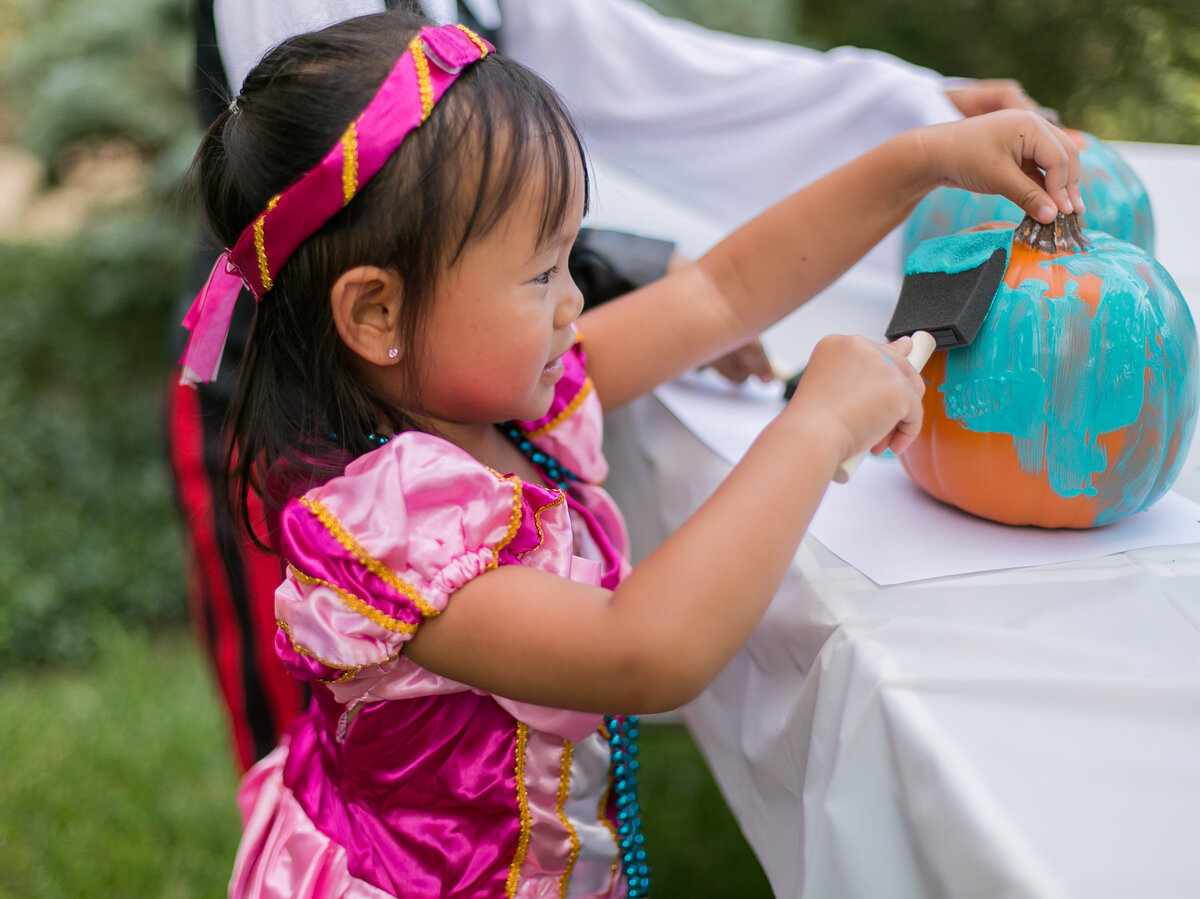 A young girl paints a pumpkin teal to signify that a place is safe for children with food allergies to go trick-or-treating.

Orange, black — and now teal? Yes, teal. There are teal plastic pumpkins, paint-your-own pumpkin kits, and trick-or-treating buckets. It's all part of a campaign to make the culmination of Halloween festivities, trick-or-treating, more food-allergy friendly.

Having a teal pumpkin on the doorstep (teal being the color of food allergy awareness) is a way to signal to people with food allergies that this is a safe home for trick-or-treating, says Jennifer Norris, president of the Food Allergy Community of East Tennessee (FACET), which started the project.

In addition to handing out candy, houses that display teal pumpkins also have bowls of non-food items such as glow sticks, stickers or Dracula teeth. "We don't want to be the Grinch of Halloween at all," says Norris. "We don't want to take candy away from the people who can have it."

The Teal Pumpkin project started at a local FACET event in 2013 and took off quickly afterward thanks to social media. This year over 33,000 houses have listed their homes or businesses on a searchable Teal Pumpkin map, though Lisa Gable, CEO of Food Allergy Research & Education, a national non-profit helping to promote Teal Pumpkin, says she expects the number of people participating is much higher. "One in 13 children has a food allergy," she says. These kids often face problems with bullying. "It's a complex disease that causes a great deal of stress for kids and parents," says Gable. "Teal Pumpkin can make [Halloween] stress-free."

"When we trick-or-treat, we swap out the candy for 'tricks'," says Hillary Carter, whose two boys — ages seven and nine — both have serious food allergies. "They go through the act of trick-or-treating," Carter says. "They can participate like everyone else but know not to touch the candy."

It's a system that's worked for many parents of kids with food allergies even before Teal Pumpkin. Yet food allergies can be isolating. Many holidays focus on food. But now on Halloween, Carter says many of her friends put out teal pumpkins and tag her on social media with a note that says they are thinking of her boys. 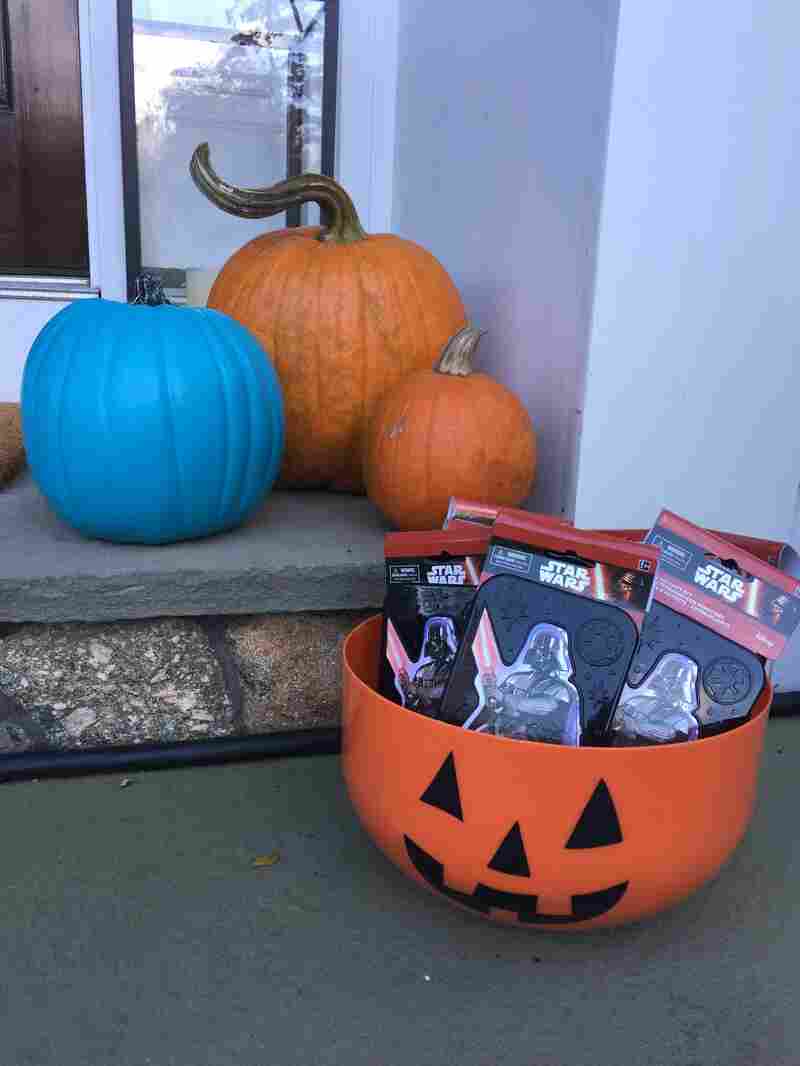 Hillary Carter displays a teal pumpkin on her front step along with a bowlful of toys that kids with food allergies can choose instead of candy. Courtesy of Hillary Carter hide caption 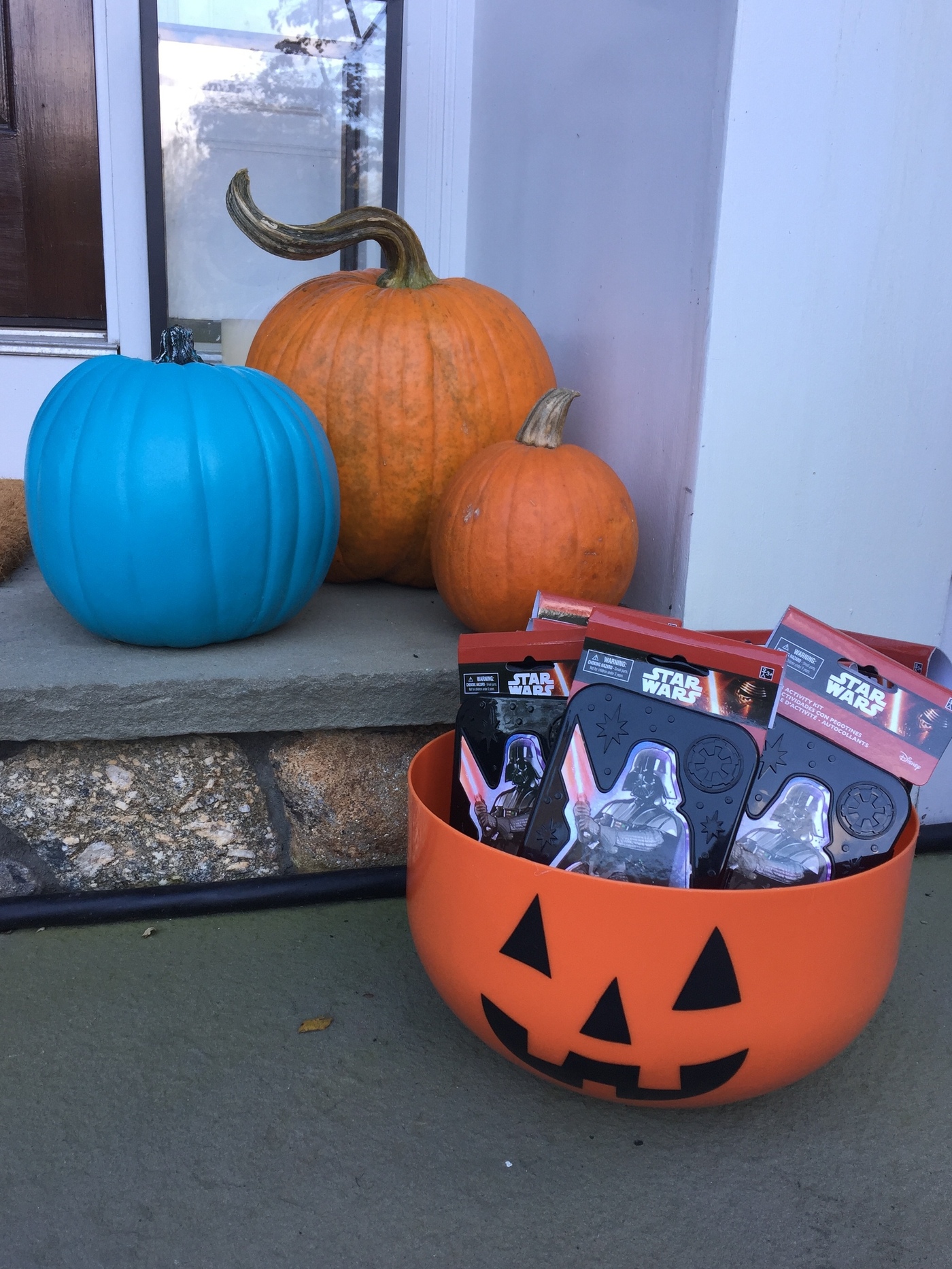 Hillary Carter displays a teal pumpkin on her front step along with a bowlful of toys that kids with food allergies can choose instead of candy.

Shana Henke's son, who is allergic to eggs, is only four. She and her husband sit down with him before trick-or-treating and remind him that they have to look through his candy and remove the ones he can't eat before he can have any. It's easy today but she worries about what happens when he gets older. Henke recently brought it up with their doctor, who warned her that there likely will "be an age when he'll say 'this won't make me sick' and eat it." She lives in North Dakota, where she says there isn't as much food allergy awareness as she'd like. Henke still remembers one home she went to that was handing out full-size candy bars her son couldn't eat and, when Henke said something, the person ran in to get some coloring pages instead. It's been over a year since that happened, and yet she still remembers it warmly.

"Right now there are no treatments for life-threatening food allergies," says Gable. "It's avoidance or take an epinephrine injection or go to the emergency room." But while more people are becoming aware of the prevalence of food allergies, not everyone treats it as the serious medical condition it is.

"I love that we can make Halloween about education," Carter says. "Anything we can do to teach the community about food allergies will make the world a safer place for my kids."