Accessibility links
Beef Noodle Soup In Bangkok Has Been Simmering For 45 Years : The Salt The giant pot of dark brew brimming with beef, spices and herbs sits near the sidewalk on a busy street in Bangkok, where it is constantly stirred by a member of the third-generation-owned restaurant. 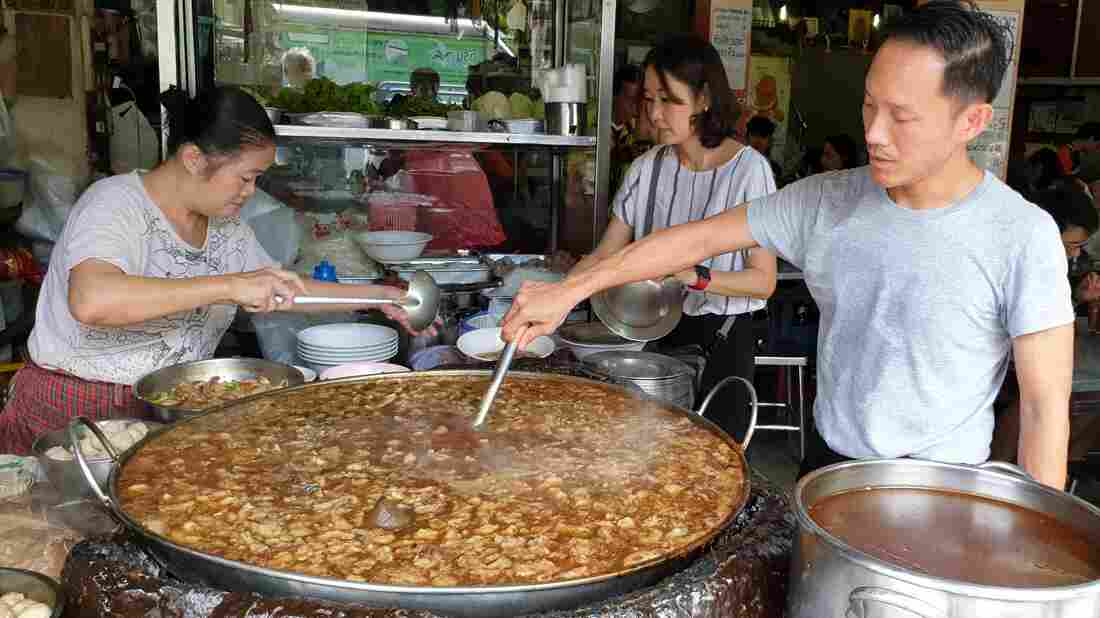 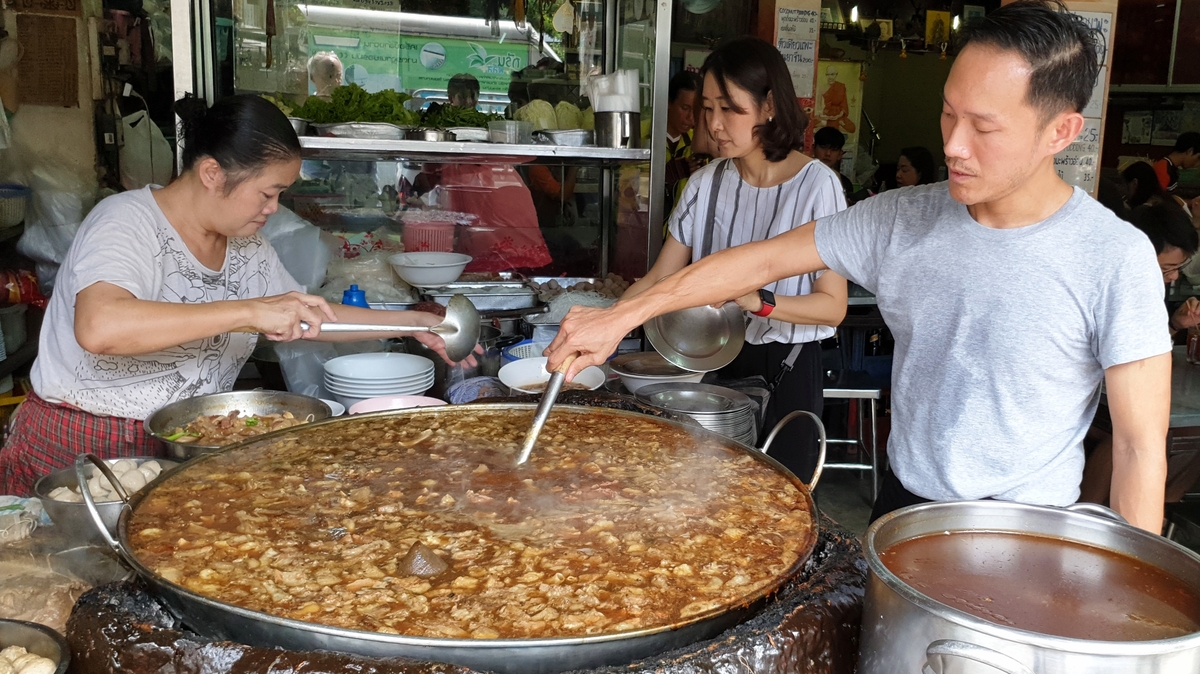 Nattapong Kaweeantawong, a third-generation owner of Wattana Panich, stirs the soup while his mother (left) helps serve and his wife (center) does other jobs at the restaurant. Nattapong or another family member must constantly stir the thick brew.

In Bangkok, customers can't get enough of the latter at Wattana Panich, a noodle soup joint in the trendy Ekkamai neighborhood, where third-generation owner Nattapong Kaweeantawong wants to clear up what he thinks is a popular misconception about his beef soup.

"Lots of people think we never clean the pot," he says. "But we clean it every evening. We remove the soup from the pot, then keep a little bit simmering overnight."

It's that little bit, he says, that forms the stock of the next day's soup. So, yes, at least a taste of what you put in your mouth is 45 years old and counting.

"Since my grandfather's time, we've never really had a set recipe about how much of each ingredient to put in," Nattapong says. "So the person making the soup will constantly have to taste it to know what needs to be added."

He says some of the ingredients include nearly a dozen Chinese herbs, plus garlic, cinnamon, black pepper and cilantro root. And then there's the beef. He goes through about 150 pounds a day.

"To make it tender, we cook the beef for around seven hours. We put the whole thing into the pot so it absorbs all the flavors," he explains. "Then after three hours, we take it out and cut it into smaller pieces, then cook it for another four hours."

The pot at Wattana Panich sits near the sidewalk along a busy street. The simple restaurant occupies two floors of a shophouse that the family bought decades ago. And a good thing too, Nattapong says. They couldn't afford to even rent here now. The pot itself draws crowds, in part because of its sheer size. About 5 feet in diameter and 2 1/2-feet deep, it brims with chunks of beef bumping into one another as Nattapong or another member of his family constantly stirs the thick, dark brew.

"When I first started in the business, my dad would make the soup and the broth and I would taste it, to understand what the perfect taste is," Nattapong says. "Nowadays, I can just look at it and know what's missing."

The result is an aromatic blend of spices, herbs and beef — one that has been drawing repeat business since his grandfather started making the soup at the original shop down by the Chao Phraya river more than 60 years ago.

"My earliest memory coming here, I was 5 or 6, maybe," says 24-year-old Indi Rakamnuaykit. He says his father has been coming here since he was 11 years old.

"The prices were supergood. According to my dad, he'd say coming here with a large family would never break the bank. You would always come here because you expected top-quality food and homey service," he says. "It's just nice."

Though other items are on the menu, he gets the beef noodle soup every time. 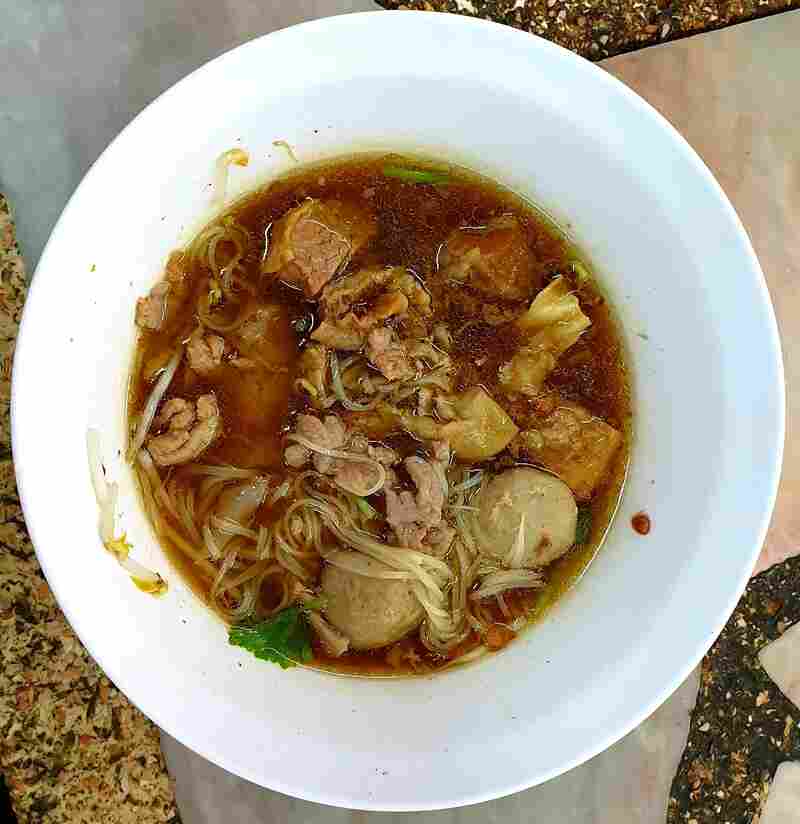 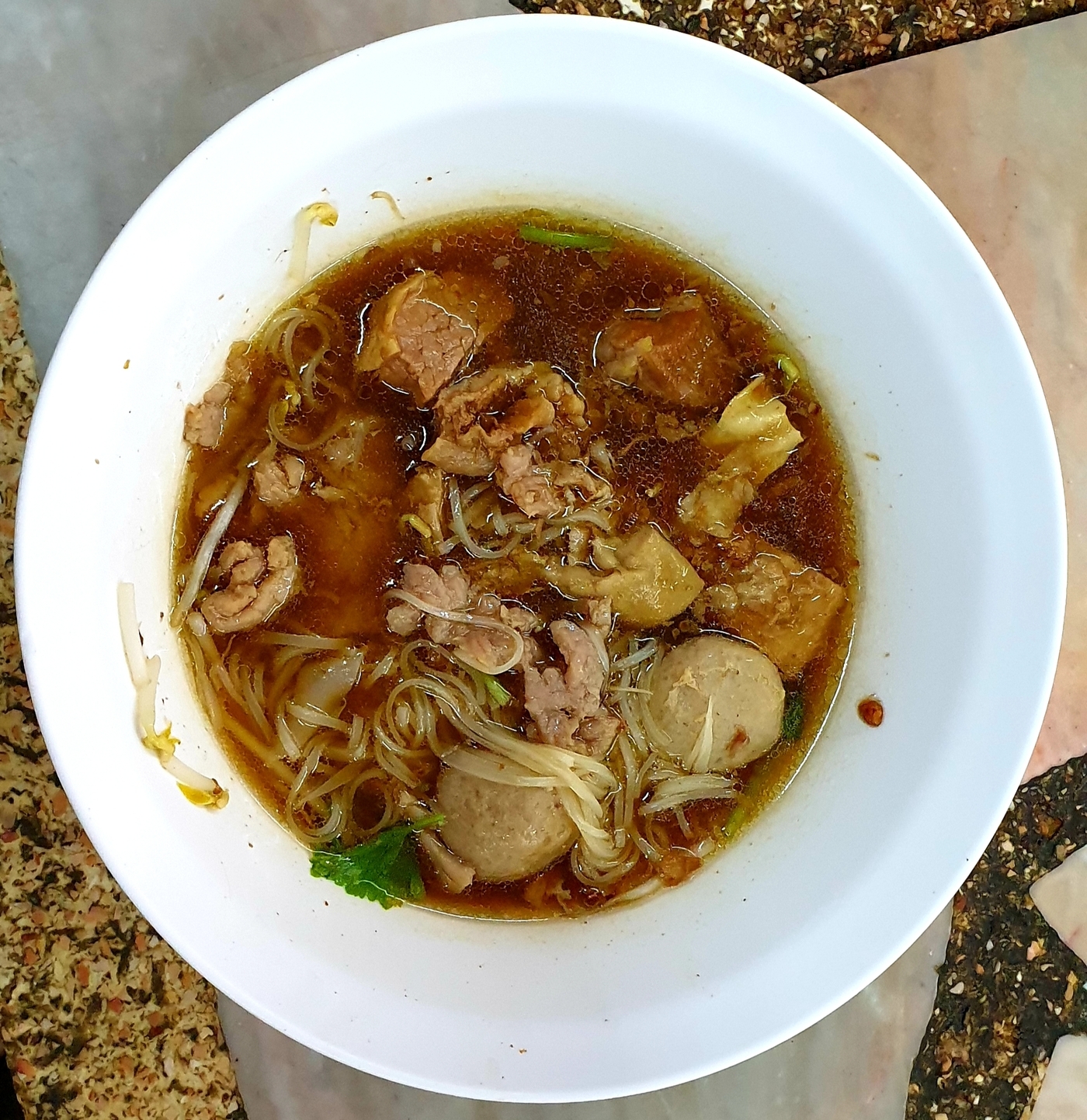 "You really taste the marrow and the fat," he says. "That's what makes the soup so good — the quality has never changed. And I've been coming here for a very long time."

Ussanee Seesod is a first-time customer. She's Thai and runs a company that does urban food-walk tours around Bangkok. She rates the soup a 10 and says she'll be adding Wattana Panich to the tour. She doesn't fret much about the idea of slurping soup that has been simmering for 45 years.

"For Asian people, we're quite familiar with fermented thing and something you age for very long, so this not bother me at all," she says. She thinks it helps give the soup its distinctive flavor.

"I believe so if you stew it for so long, you can bring out all the flavor from the bone they put inside, all the herbs, for any ingredient, any condiment that they put inside there."

And it's not just Thais who come to the two-story shophouse. Chris Brady is an Australian businessman who makes three or four trips a year to Bangkok. And each time, he says, he makes it a point to come here.

"Yes, I'm a Wattana Panich junkie," he says, laughing. "The first time I came was seven or eight years ago. One of my mates from Singapore said I had to come here, and I've been coming here ever since."

Brady lived in Singapore for several years — so he's no stranger to soups. But he says nothing there compares with the soup here at Wattana Panich.

"I think they have the best beef noodle soup in the world, without question," he declares. "It's the stock. There's a bit of sweetness; there's a real beefiness; there's a lot of depth to the flavor. It's not just Maggi beef stock mixed with water."

Wattana Panich has been a family business for more than 60 years. Nattapong's father and mother still work at the shop, though Nattapong says he calls the shots. As to who makes better soup, the father doesn't hesitate when I pose the question to him while Nattapong tends to a customer.

When he returns, Nattapong just smiles when I tell him this. And like the diplomatic son he is, he says that if he can achieve making a soup that's as good as his father's, that's enough.

What about 10 years from now, I press him. Will you be as good as him then? He can't resist. "Even better!" he says, laughing.

He says his 12-year-old daughter has expressed interest in taking charge when she's old enough, and he's tired enough to step aside. He hopes that she doesn't change her mind and that she becomes the fourth generation to stir the pot. Who knows? Maybe the soup at Wattana Panich can simmer for even longer.