Accessibility links
Winemaking In France Is Being Disrupted By Climate Change : The Salt Drier, hotter weather — as well as drastic episodes of rain, hail and cold — has affected alcohol levels, weeds and harvest. The government is trying to help, but can France adapt quickly enough? 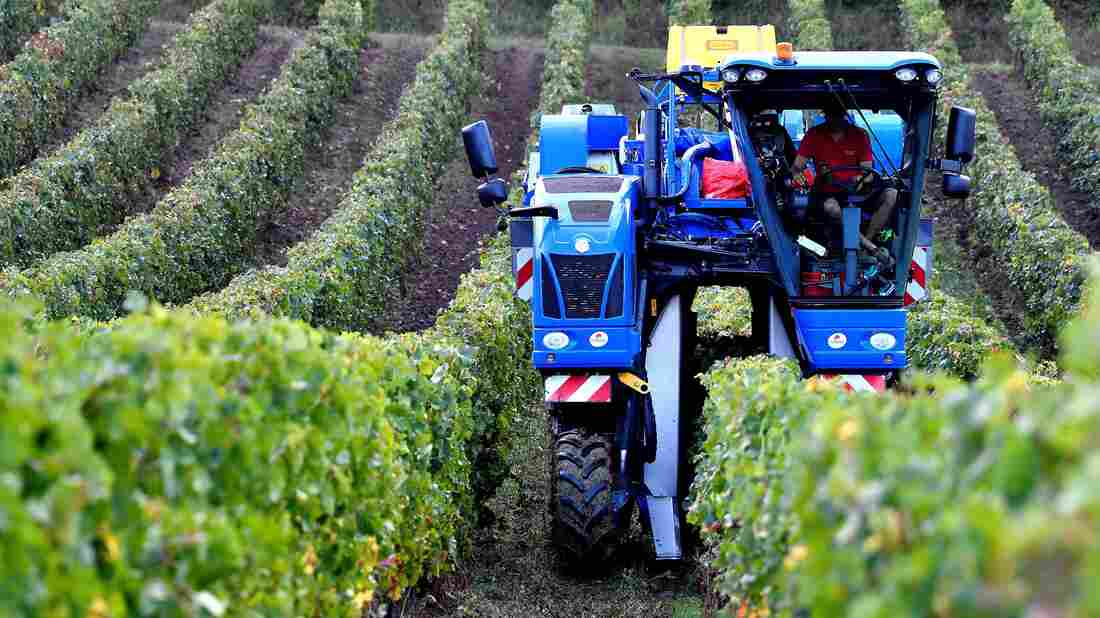 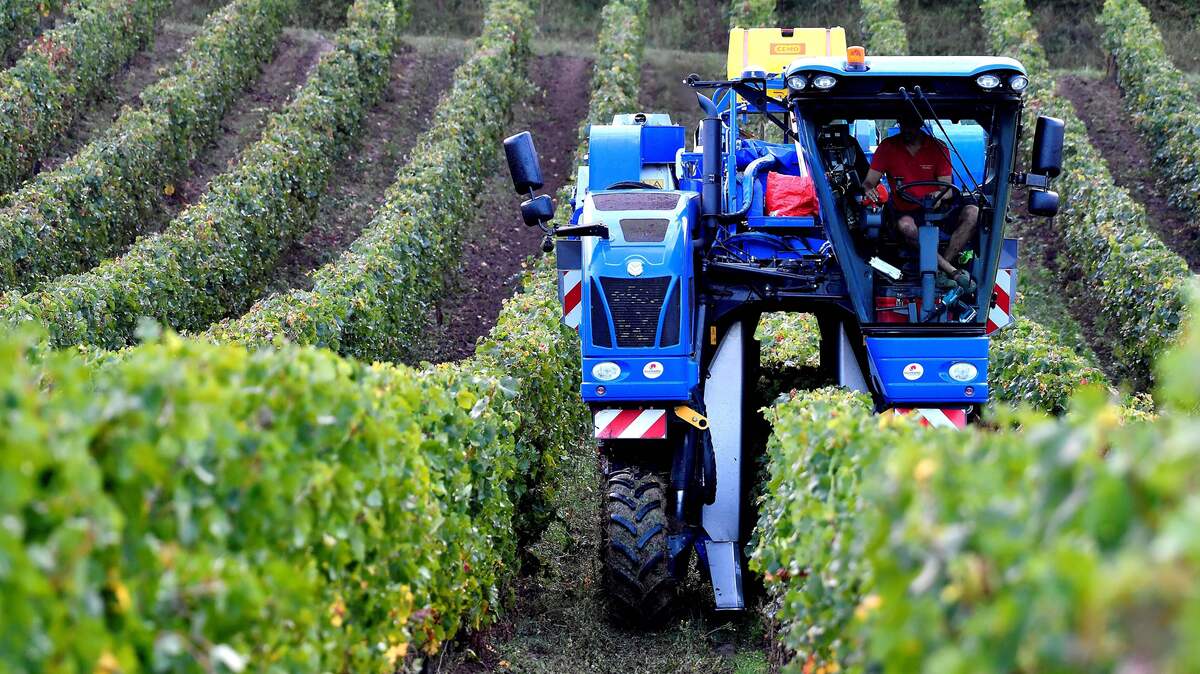 A vineyard worker drives a grape harvester tractor in the Bordeaux region of southwestern France, where climate change is raising new challenges for winemakers.

In France, climate change is already affecting one of the country's most emblematic industries — winemaking. French vintners say heat, drought and erratic weather are altering the landscape and their centuries-old way of working.

Brothers Remi and Gregoire Couppé are fourth-generation winemakers who craft a top vintage, grand cru St. Emilion. In the past few years they've been confronted with some new challenges. Remi Couppé, 44, says there's no denying the weather is getting hotter and drier.

"Because of the grapes. They show us the change," he says. "Especially in alcohol. The alcohol level has been getting higher in the last five years." These days, the alcohol content by volume can reach 15%, he says; when he was a boy, "it was maximum 12 [% ABV]. It's causing me some problems when I start the vinification process, because I have to use new yeast to avoid too much alcohol. It's really new for me."

The higher alcohol levels come from increased sugar in the grapes because of more sun and heat. What's also new are some of the plants sprouting up between the vines. Couppé picks a flowery-looking weed, holding it up to the blazing sun. "This plant is from the south of Europe and I never saw it here in my life before four years ago."

Couppé says they have to be careful when using the mechanized harvester now, because such plants can get mixed in and add a taste to the grapes.

The brothers say that in the past three years they've stopped a process called "stripping," where most of the vine leaves are removed just before the harvest. Now they need the leaves' shade to keep the grapes from burning on the vine. Couppé points to a shriveled, sun-exposed cluster of grapes next to the dark, plump ones still shaded by the leaves.

Harvest time is also arriving earlier across all French winemaking regions. At Chateau Smith Lafitte in the Graves wine area of Bordeaux, dozens of pickers head into the rows of vines with their buckets and baskets. Vinemaster Nicolas Poumeyrau says it's not just the heat and drought that are causing problems.

"It's the more drastic episodes of weather conditions," he says. "So when it rains, it rains a lot. When it's cold, it's colder maybe a little bit longer, especially in the beginning of spring. So more severe conditions than before." 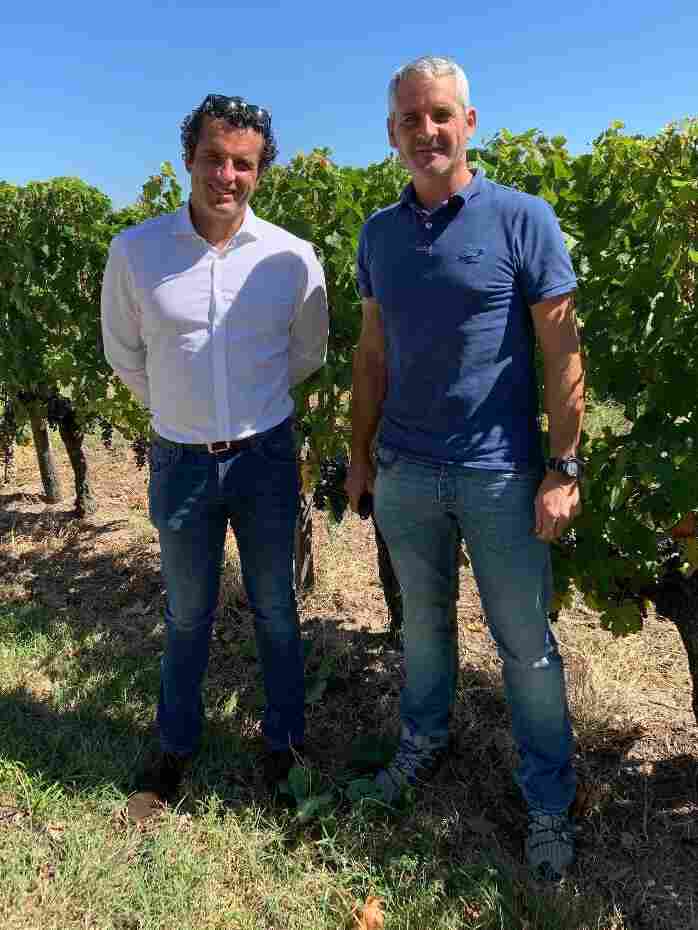 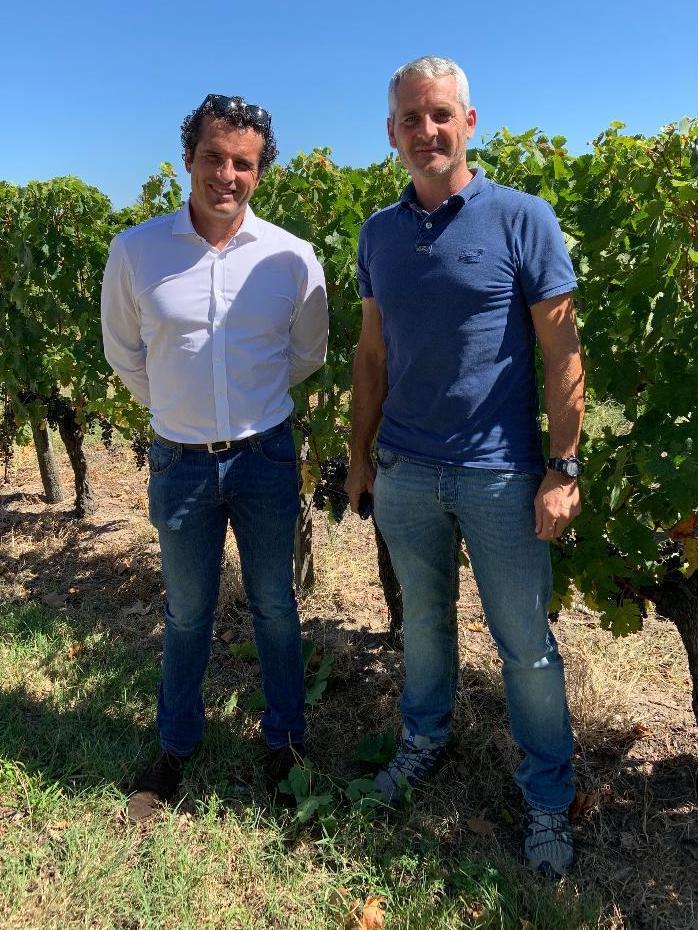 Brothers Gregoire (left) and Remi Couppé are fourth-generation winemakers. Remi Couppé says hotter and drier weather has changed the way they have to harvest grapes.

In the past couple of years, Poumeyrau says, some chateaux have been banding together to fight the increasing frequency of hailstones. They're now hooked up to radar systems that let them know when a hailstone-charged cloud is approaching.

"So we launch some helium balloons together, and on those balloons we attach hydroscopic salt," he says. "The balloon is sucked into the storm cloud and the hydroscopic salt burns, transforming the hail into rain."

The French government is now looking for ways to help winemakers adapt to the new conditions.

Nathalie Ollat heads the Institute of Science for Vine and Wines, in the city of Bordeaux. Scientists here are studying the changing climate's effects on grapes, both in the laboratory and in a 25-acre vineyard.

"So here we are in a vineyard in the middle of the city," she says with a laugh.

Ollat says they're experimenting with dozens of varieties of more heat-tolerant grapes from southern and eastern Europe — places like Spain, Portugal and Georgia — comparing their performance to the traditional grape varieties of Bordeaux, particularly merlot and cabernet sauvignon. Scientists in white lab coats can be spotted between the leafy green vines, picking the grapes so they can examine their flesh, seeds and skin.

"We have to study them in detail and see how they perform in terms of yield, but also in terms of fruit quality and fruit composition," says Ollat. "We want to see their potential to be introduced in Bordeaux and to blend with the other Bordeaux varieties, while keeping the style."

Bordeaux wines are an assemblage, or blend, of grape varieties and are named after the chateau where they're grown, harvested and blended together. The problem with introducing new varieties is that under rules set out by the French wine-governing body, INAO, an authentic Bordeaux wine can be made from just six authorized grapes, even though experts predict some of those varieties may not be able to survive as the climate heats up.

American Mark Gowdy used to work with the California water board. He's now Ollat's colleague at the Institute of Science for Vine and Wines, where he's studying the effect of drought on vines. He says they've selected six varieties of grapes from other parts of Europe to study very closely; they want to see how the fruits respond to temperature, soil and water content as it gets hotter and dryer.

"Evidence shows they behave differently," says Gowdy. "Some varieties will slow down and use water more efficiently in response to increasing temperature. So in the future, as the climate changes, this could help growers select vines that can better adapt to their circumstances." 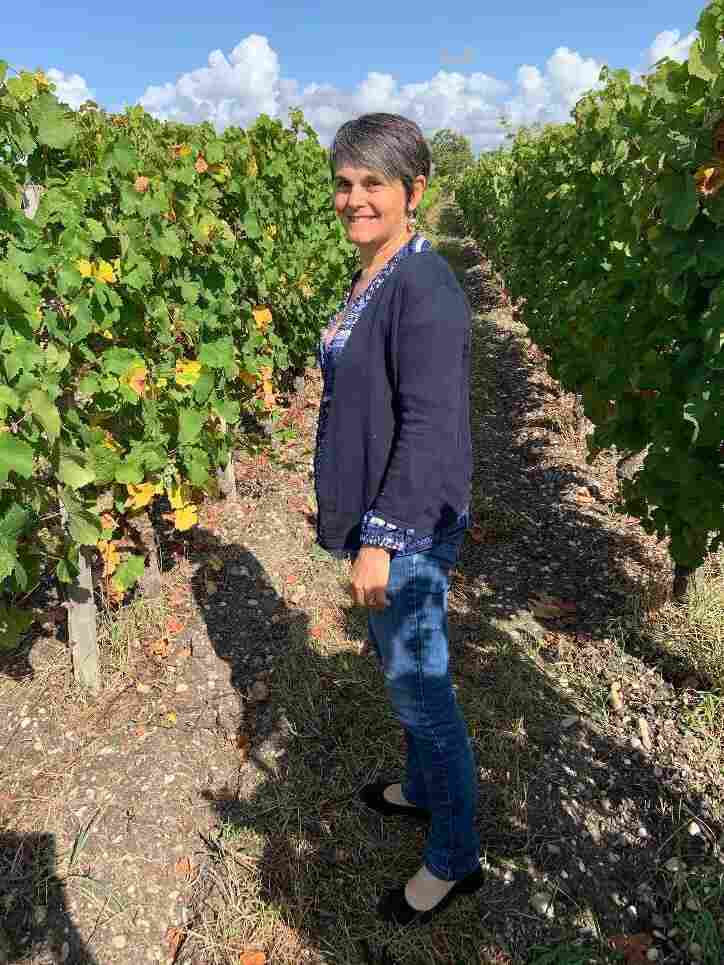 Nathalie Ollat, who heads the Institute of Science for Vine and Wines, says researchers are experimenting with dozens of varieties of more heat-tolerant grapes from southern and eastern Europe. Eleanor Beardsley for NPR hide caption 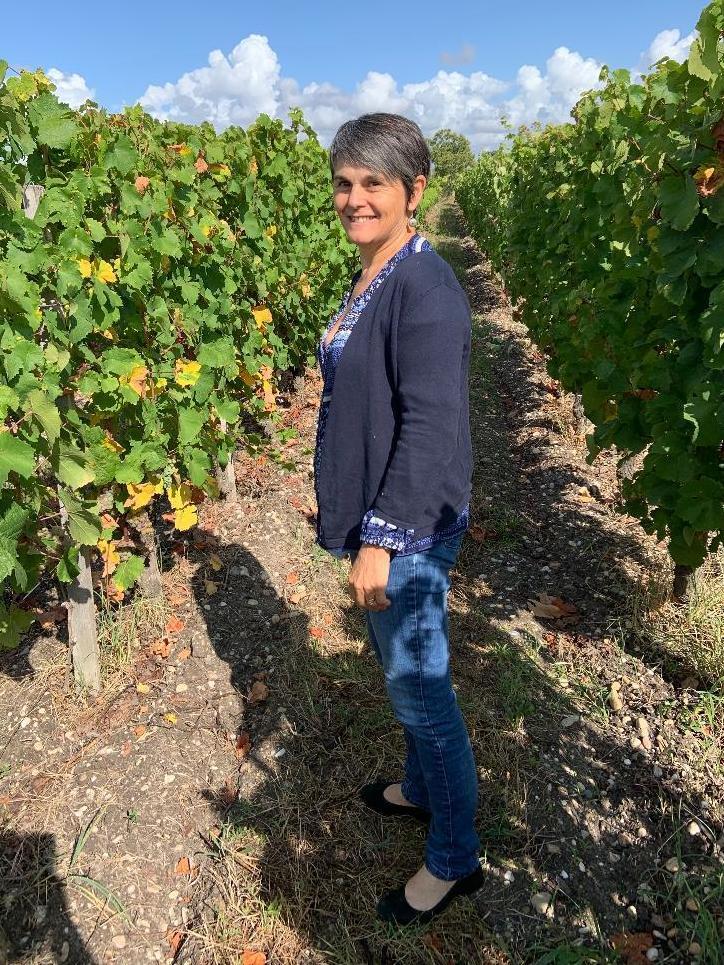 Nathalie Ollat, who heads the Institute of Science for Vine and Wines, says researchers are experimenting with dozens of varieties of more heat-tolerant grapes from southern and eastern Europe.

Gowdy is also examining the ugni blanc grape, which is used to produce cognac. That region lies just above Bordeaux, along the Atlantic coast of France, and producers there are also concerned about climate change. Vineyards are becoming more water stressed in many parts of the world, says Gowdy, but it can be particularly difficult in France and Europe, where strict authenticity standards generally do not allow winemakers to irrigate.

Winemaker Alain Maufras stands among the oak barrels in the cellar of his Chateau Pontac Monplaisir, grousing with his vine master about what they call the rigid, antiquated system governing French wine. Maufras says he applied for permission to irrigate this summer but was turned down. He had some 300-year-old vines die in the successive heatwaves. "That wouldn't have happened if I had been able to practice drip irrigation, like they do in California," he says.

Maufras says in today's context, the lack of pragmatism makes no sense.

"Bordeaux is no longer the center of the wine world. People are making wine everywhere and they're evolving a lot faster than we are. We are living in a bubble."

Bordeaux winemakers such as Maufras say that if they're going to adapt and survive — either with the grapes they have, or by planting new varieties — the centuries-old rules governing Bordeaux wines will have to evolve as well.

But agronomic scientist Ollat says irrigation is not a sustainable option. "In the future, if there's a lack of water, it will be kept for crop production — to feed people — and not for wine," she says. "The grapevine comes from the Mediterranean region and it has a great ability to adapt to drought."

In a sign of how serious the situation has become, this past July the French wine governing body, the INAO (Institute National de l'Origine et de la Qualité), approved the use of seven new grapes for certain categories of Bordeaux wines.