Accessibility links
Family Adds Oaxacan Flair To Thanksgiving In New Cookbook : The Salt Thanksgiving might be the most Oaxacan holiday in the U.S.; Guelaguetza, the name of the Lopez family's award-winning Los Angeles restaurant, is a Zapotec word meaning "to give and receive."

Listen · 5:02 5:02
Family Shares Their Oaxacan Tradition Of Giving Thanks In New Cookbook 5:02 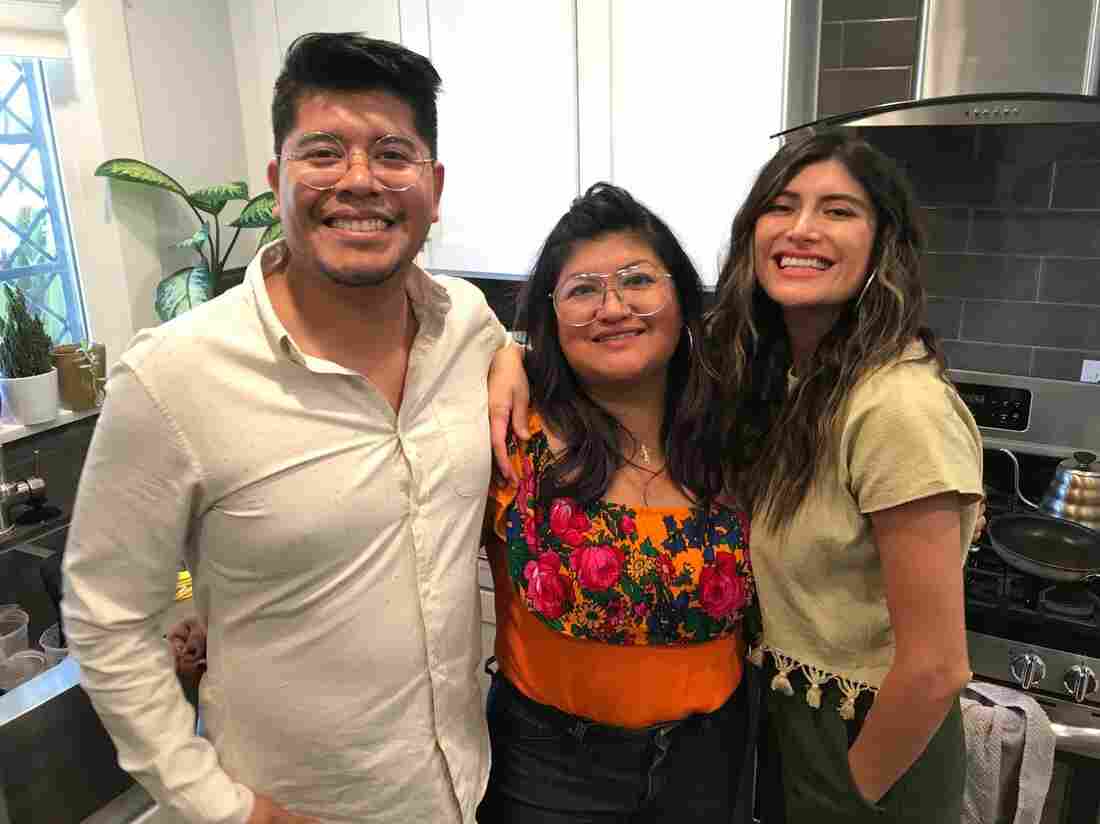 Fernando, Paulina and Bricia Lopez run Guelaguetza, the family's restaurant. The cuisine reflects traditions that are rooted in Oaxaca's many indigenous cultures, which the family honors at Thanksgiving. Mandalit del Barco/NPR hide caption 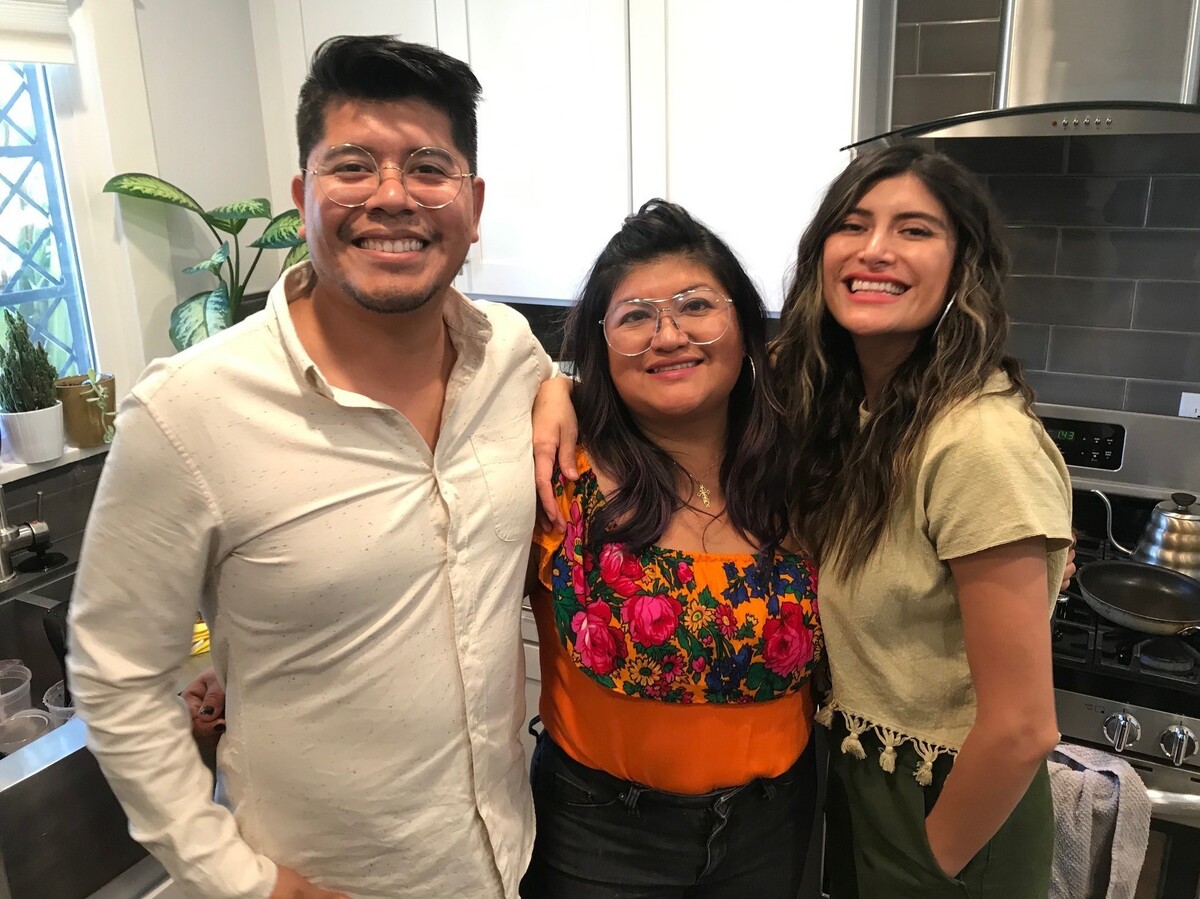 Fernando, Paulina and Bricia Lopez run Guelaguetza, the family's restaurant. The cuisine reflects traditions that are rooted in Oaxaca's many indigenous cultures, which the family honors at Thanksgiving.

Since making their way from the Mexican state of Oaxaca to Los Angeles in the 1990s, the Lopez family has celebrated Thanksgiving with a mix of flavors and culture: mashed potatoes, beans, turkey and jalapeño.

"We'll probably then have some mezcal to kind of just digest," says daughter Bricia. Her brother Fernando adds, "For the longest time, I thought everybody did that."

Their Thanksgiving dinner also includes green spaghetti in poblano salsa, a black bean puree, and Marie Callender's pies. Bricia says their mother learned to cook American food to celebrate the holiday in their new country, but has always added a Oaxacan flair.

It turns out that Thanksgiving is probably the most Oaxacan holiday in the U.S.; Guelaguetza, the name of the family's Koreatown restaurant, is a Zapotec word meaning "to give and receive."

Guelaguetza is also a tradition that is rooted in Oaxaca's many indigenous cultures, which the family honors at Thanksgiving.

"It really is the place where corn was born, where they find the earliest traces of tomato, where you find the biggest variety of chilies," says Bricia. "I have so much respect for so many women that really have single-handedly preserved hundreds of years of culture through their food and their cooking, because they haven't changed the way they make things for generations."

This generation of Lopezes — Bricia, Fernando and Paulina — continue their family's Oaxacan traditions by running the restaurant they grew up with, the one their parents owned until they retired a few years ago. The restaurant is now celebrating its 25th anniversary with Oaxaca, a new cookbook of the family's recipes. 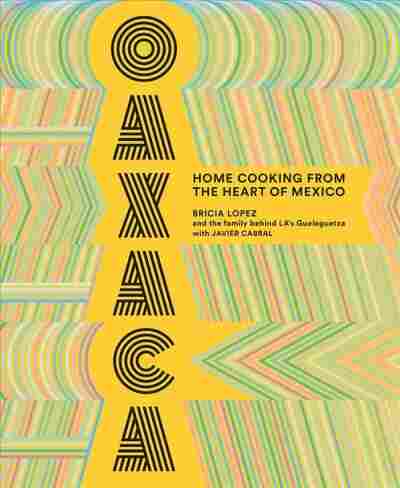 Home Cooking from the Heart of Mexico

by Bricia Lopez and Javier Cabral

In the 1990s, Fernando Lopez Sr. emigrated to Los Angeles. It wasn't long before he was selling Oaxacan food to his paisanos. A year after opening Guelaguetza, the late Los Angeles Times food critic Jonathan Gold cemented its star on the city's culinary map, calling it the "best Oaxacan restaurant in the country." The cookbook is dedicated to him.

"He was an essential part of not just Los Angeles and many other restaurants but also to my family's success," Bricia says of Gold. "He was always super supportive."

"Mole is, I would say, one of the mother sauces of Oaxaca," Bricia says. "It is a combination of a few chilies and spices together. There is a little bit of chocolate in there just to round up the flavors and [add] a hint of sweetness. It really is the perfect balance of salty, sweetness, spice."

A visit to Fernando's home in South L.A. begins with him offering a michelada — a crisp lager mixed with the restaurant's concoction of lime, tomato and spices. He starts by rubbing the rim of a chilled glass around a dish of chamoy, a thick, grainy chile sauce. "It's reminiscent of Mexican candy," he says.

Then he rubs the rim with tajin, a blend of chile, lime and sea salt. He shakes up a bottle of the restaurant's "I Love Michelada" mix, and pours it into the glass of cold beer. 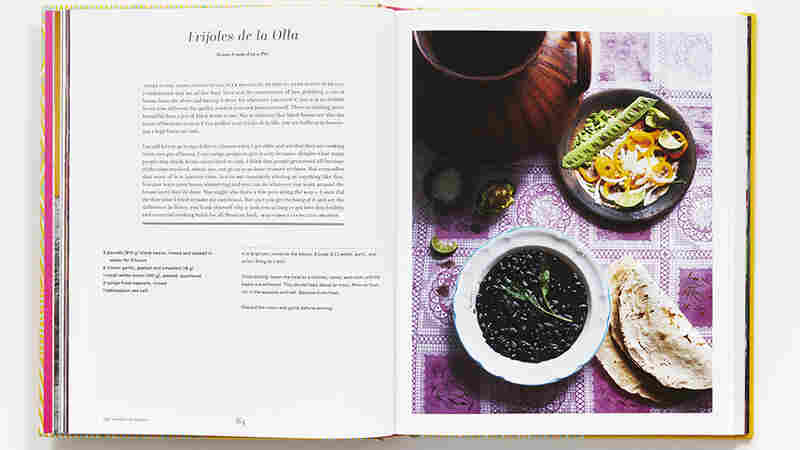 A recipe from the cookbook for frijoles de la olla, or "beans cooked in a pot," a Oaxacan staple. Quentin Bacon/Abrams Books hide caption 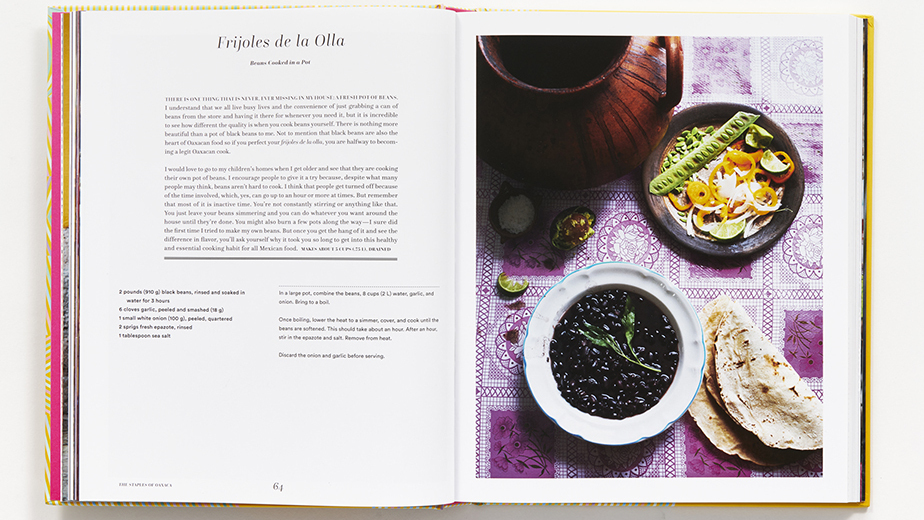 A recipe from the cookbook for frijoles de la olla, or "beans cooked in a pot," a Oaxacan staple.

One staple of their Thanksgiving feast is a puree of black beans — frijoles made with toasted chilies and dried avocado leaves. Paulina says her mother usually holds the leaves over a flame to char them just a touch. It's the avocado leaves that give their food that quintessential Oaxacan flavor.

"For me, it smells like smoke and chile," Paulina says. "That also gives a little spice hint to the frijoles. It smells like when you walk into a backyard in a town and the ladies are making tortillas, and the wood is burning."

Fernando takes a whiff. "To me it smells like earth and being in touch with nature."

Bricia closes her eyes to breathe in the scent of the leaves. "This is what my grandma's hair always smells like," she says, smiling. "I think the avocado leaf is similar to the bay leaf. And when you roast anything, those smells really heighten."

This Thanksgiving, the Lopez siblings say they're grateful to share their recipes and their culture. The new cookbook is their guelaguetza.