Accessibility links
After WWII, Mutton Fell Out Of Favor In The U.S. Can It Make A Comeback? : The Salt Once the stuff of high-end cuisine, mutton consumption tanked thanks to competition from the cattle industry and GIs fed up with rations. Fans say it's time to re-embrace this underappreciated meat. 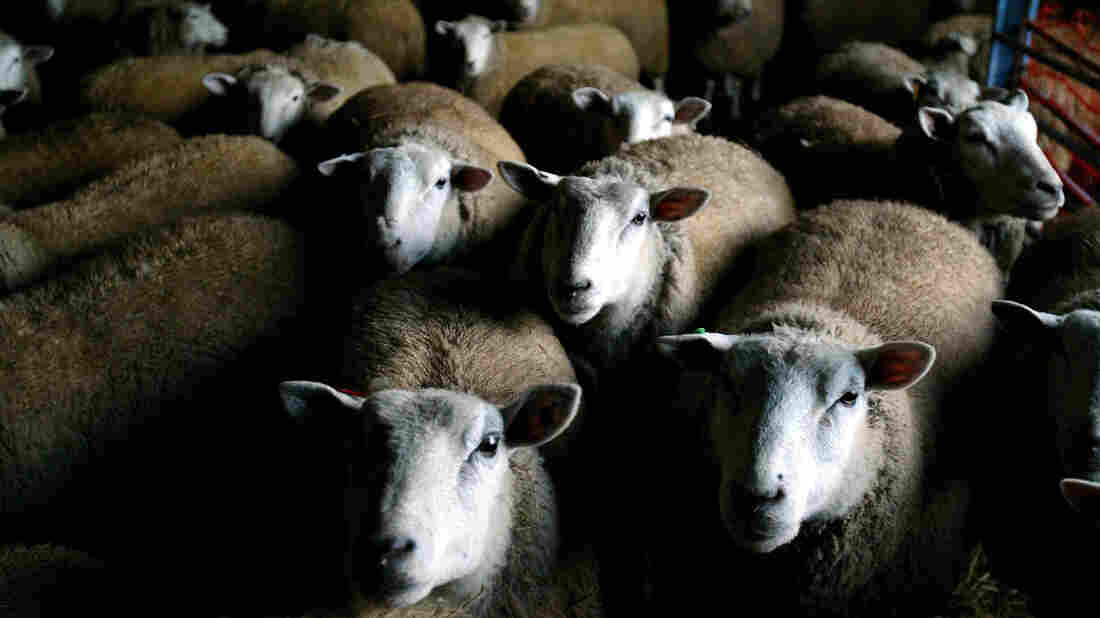 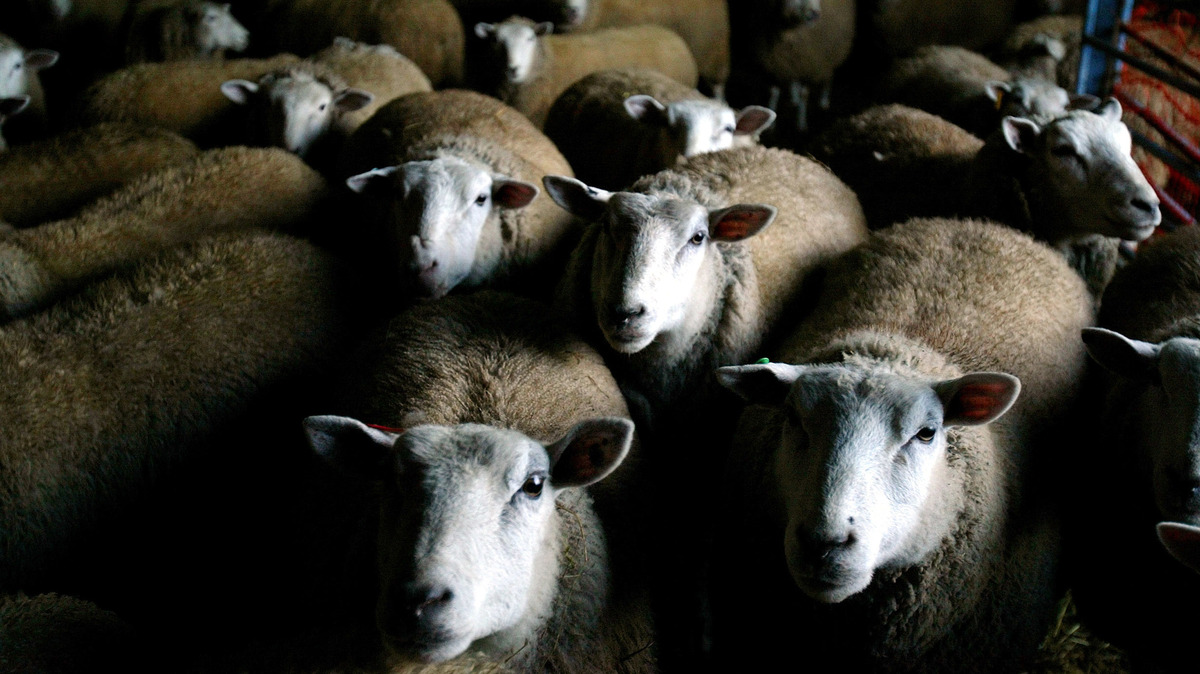 A flock of Texel-Dorset sheep gather near a hay trough in a Hudson River Valley barn in Medusa, N.Y. Millennials and more experimental diners might be open to eating mutton.

When D'Abruzzo opened its first food kiosk in New York City's Bryant Park a few years ago, I dashed over to taste the Italian mountainous region's trademark mutton arrosticini and capture photographic proof of its existence in America, as this is not a dish often seen on our shores.

Thanks to D'Abruzzo, hundreds, maybe thousands, of Americans would be able to sample the region's savory, salted, grilled sheep-meat-on-a-stick that is cooked with passion in Abruzzo, on its own specialized grill, called la furnacell.

Moments after posting photos of D'Abruzzo's arrosticini and its menu on Facebook, responses from Abruzzese friends and family came flooding in. They were excited. Proud.

One of us — in Manhattan!

They were also uniformly thrown into a state of irascibility over one unforgivable sin.

"They use lamb, not mutton!" venomously typed my Abruzzese friend, Ugo Budani, from 4,000 miles away. "There can be no substitute!"

I should note that D'Abruzzo's lamb arrosticini tastes like heaven on a stick. But that's beside the point: On this side of the Atlantic, not having a substitute for mutton in eateries could be professional suicide — because sheep meat never got a fighting chance in the United States.

"It is close to impossible to even find mutton in the U.S.," says Ken Albala, professor of history at California's University of the Pacific. "It costs more to raise sheep for longer periods of time, and the decline in wool production in the U.S. is directly related to the decline in mutton as a culinary delicacy."

That wasn't always the case. Old restaurant menus from the New York Public Library archives tell a different tale about mutton's desirability. A 1915 menu from Fraunces Tavern in New York City offered broiled English mutton chops with baked potatoes for $1.50 — 25 cents more than the price of its roast spring lamb. First-class passengers on the RMS Titanic were served grilled mutton chops, while spring lamb was reserved for second class. And, at Keens Chophouse in NYC in 1941, the English mutton chop, kidney, sausage and bacon cost $1.61, just 60 cents less than its pricey filet mignon.

"In the early 1900s there were 237 menus with mutton," says Keens Steakhouse manager Bonnie Jenkins. "But after World War II, people were celebrating. They were forced to eat mutton during war time and they wanted to get away from it. You don't see it on menus in the 1950s and '60s."

Mutton: a casualty of war

Few foods suffered quite the same public relations calamity as a result of war.

"U.S. GI's were fed canned Australian mutton, which by all accounts was just awful," says Bob Kennard, author of Much Ado About Mutton. Wherever he travels, the Welsh mutton expert says he hears a similar story: "I am told that someone's uncle or father came home from the war and wouldn't allow sheep meat in the house — they never wanted to see it again. It just went completely out of fashion."

The fact that mutton ever even rose to the ranks of high culinary fashion in the U.S. is nothing short of a miracle. The infamous sheep and cattle wars that took place in Western states like Texas, Arizona, Colorado and Wyoming between 1870 and 1920 threatened to bring the sheep industry to its knees. Shepherds, who were generally Native American or Latin American, required a free range and plenty of grass, which often left cattle subsiding on weeds and fighting for the same territory. Cattle farmers, who benefited from the support of government officials, viewed sheep as invaders. Armed conflicts ensued, leading to the slaughter of sheep — and men.

Thanks to the 1934 Taylor Grazing Act that regulated grazing on public land, shepherds and cattlemen could peacefully co-exist. But the fact that burgers — and not mutton chops — are served at every diner in America tells you all you need to know about who won the war.

The development of railroads and refrigerated railroad cars also meant that beef could be shipped all over the country, says Sarah Wassberg Johnson, a food historian. "Once livestock husbandry began to become more and more specialized in the United States and people were no longer subsistence producers, mutton was relegated to more regional status — the purview of shepherds culling stock, rather than John Doe consumers in Chicago or New York City buying from the butcher," she says.

Slow meat in a fast-paced world

Even if sheep had come out as victors, our faster paced post-war lifestyle — a shift from butcher shops to grocery stores, wool clothing to polyester blends, and an increase in women leaving kitchens and entering workplaces — may not have supported mutton.

Mutton is a high-maintenance meat.

"You've got to cook mutton long and slow, which makes it less tough," Kennard says. "A leg of mutton takes 25 minutes a pound to cook."

And that's assuming you can even find mutton.

In countries like the U.K., lamb meat comes from sheep aged up to 1 year, hogget from animals 1 to 2 years old, and true mutton from those 2 years and older. It's worth noting that Kennard says these categories are purely unofficial, but are what are generally accepted. There is no legal definition, apart from that of lamb. But the U.S. is limited in its categories and the majority of sheep butchered is what the U.K. would consider hogget — the U.S. doesn't recognize the difference between hogget and mutton, according to Eugenie McGuire, who breeds Black Welsh Mountain sheep at Desert Weyr ranch in Colorado.

Keens Steakhouse (formerly known as Keens Chophouse), one of the few traditional restaurants that serves what they refer to as a mutton chop, purchases older lambs aged 10 months to one year, and usually a bit older, says Jenkins. While not considered mutton by U.K. standards, the taste of a 10-month-old lamb is still very different than that of a 6- to 8-month-old spring lamb.

The quest to score actual mutton is tricky. The meat is popular among Navajo and Pueblo peoples, is often used in Pakistani, South African and Indian curry dishes, and can be found at small suppliers like Apple Creek Farm in Maine, which sells rosemary mutton sausage.

Outside of farms and niche markets, mutton still poses unique challenges. To create a tender meat, it needs to be hung in a cold room that allows its enzymes to break down. When supermarkets took over meat production, they weren't eager to hang meat because it's money in the fridge, Kennard says.

McGuire, who owns a modest farm, says she pays more than $150 per sheep just to have it processed, and that a severe lack of infrastructure to support sheep farming is to blame for why the meat is so expensive to maintain and ship. A local brewery buys her mutton to make a sausage dish affectionately called Baahwurst, but a local upscale chef, also a buyer, labels his "lamb"on menus. Despite the popularity of the dish, McGuire says customers can't get past the label "mutton."

Millennials and more experimental diners on both coasts might be open to eating mutton, McGuire says, but when one high-end restaurant in New York City purchased her USDA-inspected mutton, it "cost a bloody fortune to ship — three times the cost of other meat." Mutton must be shipped overnight and packed in dry ice, and the additional costs, McGuire explains, include a Hazmat charge on top of an overnight shipping charge.

A mutton revival on the horizon?

Still, McGuire, Kennard and other champions for mutton say the meat has a lot to offer and that rebranding, re-education and investment in small processing plants are needed to create new buzz around the industry. In the U.K., where the Mutton Renaissance Campaign was founded by Prince Charles, those efforts include a push to categorize mutton by location and breed. In the U.S., farmers like McGuire are also eager to differentiate between breeds and diet (grass-fed mutton is tastier, according to experts), while celebrity butchers like Adam Danforth are using social media to impart knowledge on the delicious benefits of dry-aging sheep.

According to Danforth, Americans have been informed, told, reminded and marketed by a commercial industry that tenderness is the ultimate characteristic of good meat, and he calls it a ploy that plays into their model — because tenderness comes from the opposite conditions that flavor does. Mutton is neither tough nor gamey, he argues, and is a superior eating experience to lamb. "In fact, lamb these days is more and more being developed to taste less like the species of sheep and more like beef to better appeal to the mainstream," Danforth says.

Mutton's best days may actually be ahead of us.

"Good mutton is like the best steak you've ever had," McGuire says. "The biggest problem is getting people to try it."

Lisa Fogarty is a freelance writer from New York who covers food, health and culture.