Accessibility links
Trove Of Recipes Dating Back To Inquisition Reveals A Family's Secret Jewish Roots : The Salt Many Jews were forced to convert during the Inquisition, a history often lost to their descendants. Finding recipes adhering to Jewish food customs helped one woman unearth her family's hidden past. 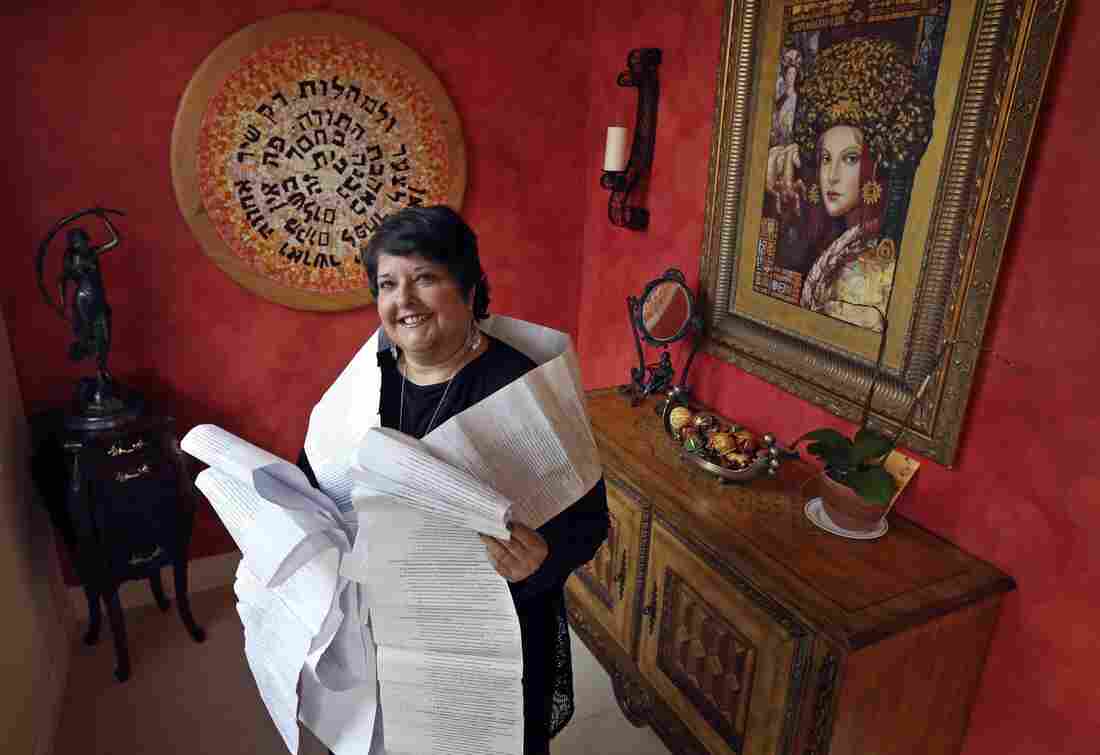 Genie Milgrom, pictured in 2013, stands in the entryway of her Miami home wrapped in a long family tree, filled with the names of 22 generations of grandmothers. Raised Catholic, Milgrom traced her family's hidden Jewish roots with the help of a trove of ancient family recipes written down by the women of her family over generations. Emily Michot/Miami Herald/Tribune News Service via Getty Images hide caption 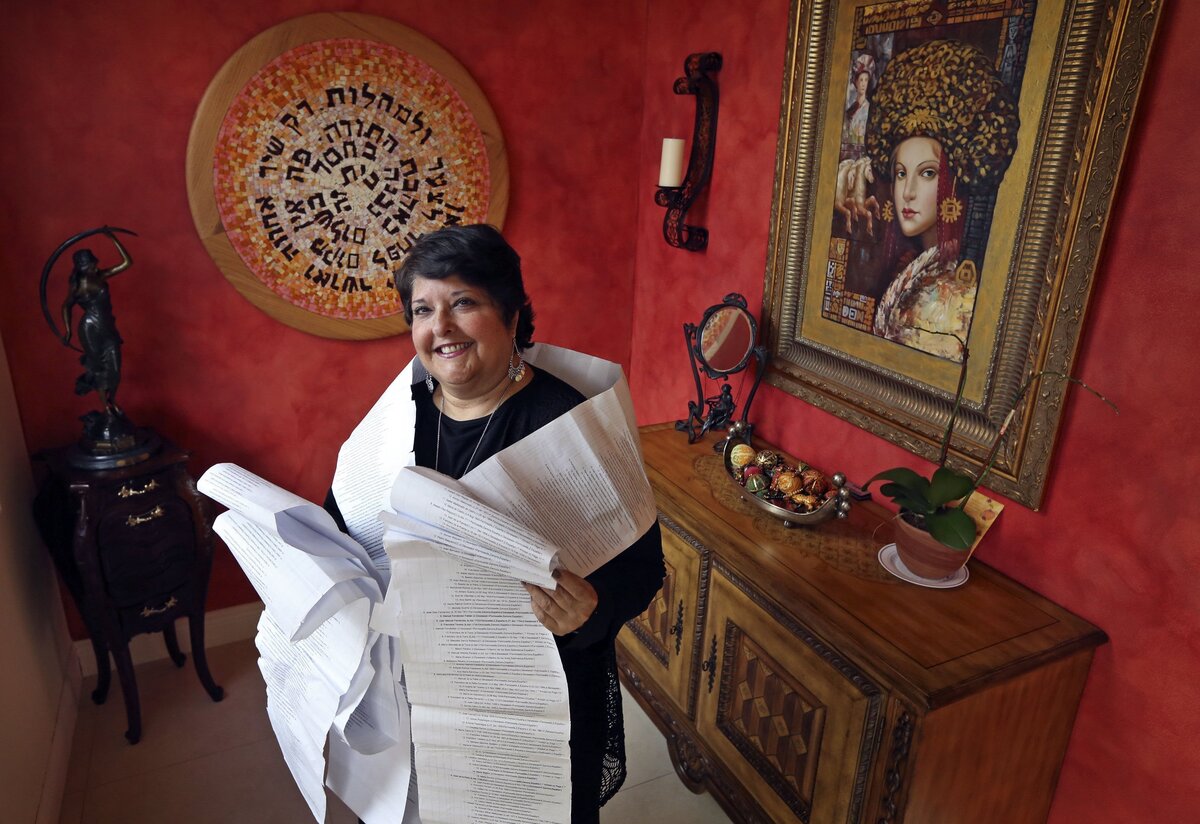 Genie Milgrom, pictured in 2013, stands in the entryway of her Miami home wrapped in a long family tree, filled with the names of 22 generations of grandmothers. Raised Catholic, Milgrom traced her family's hidden Jewish roots with the help of a trove of ancient family recipes written down by the women of her family over generations.

With the holidays approaching, it's the time of year for families to come together and share their traditions. But which traditions?

In a trove of old family recipes, Genie Milgrom found clues that led her to Inquisition-era Spain and her family's hidden Jewish heritage. Milgrom is a Cuban-American, now 65, who was raised a devout Catholic. Several years ago, when her Mom became ill, Milgrom went through her things and found a collection of recipes that had been recorded and handed down by generations of aunts and grandmothers. Some of the recipes traced all the way back to Inquisition-era Spain and Portugal.

At her home in Miami, Milgrom pulls some of the recipes from a shelf. Many are written on yellowed paper in faded ink. "You can see old handwriting and little snippets of paper," she says. "So this was just pages and pages and hundreds of these. ... Some are just crumbling."

As a girl, Milgrom says her maternal grandmother taught her some of the family's food customs. Many years later, she realized they revealed their secret Jewish roots.

"In the Jewish dietary laws, we're not allowed to consume any blood," she says. "So she taught me how to check for blood in the eggs. You never pour them directly into a recipe."

Milgrom says her grandmother also insisted she learn another family custom that involved burning a small bit of bread dough in the oven. She says, "Jewish women, when they make the bread for Friday nights, they take a little bit of the dough and they burn it like an offering and say a blessing in the oven. And you always have to have five pounds of flour to do this." Her grandmother, she says, didn't teach her to say a blessing. "But she taught me to always bake with five pounds and to always take a little bit and burn it in the back of the oven."

Milgrom has a big personality, short black hair, a permanent smile, and she's constantly in motion. On this day, she has prepared one of the most unusual recipes she uncovered, a sugary dessert called "chuletas," the Spanish word for pork chops.

"It's designed to look like a pork chop," Milgrom explains, "but it's really made from bread and milk." Basically, it's French toast that's fried in the shape of a pork chop and dressed up with tomato jam and pimentos. 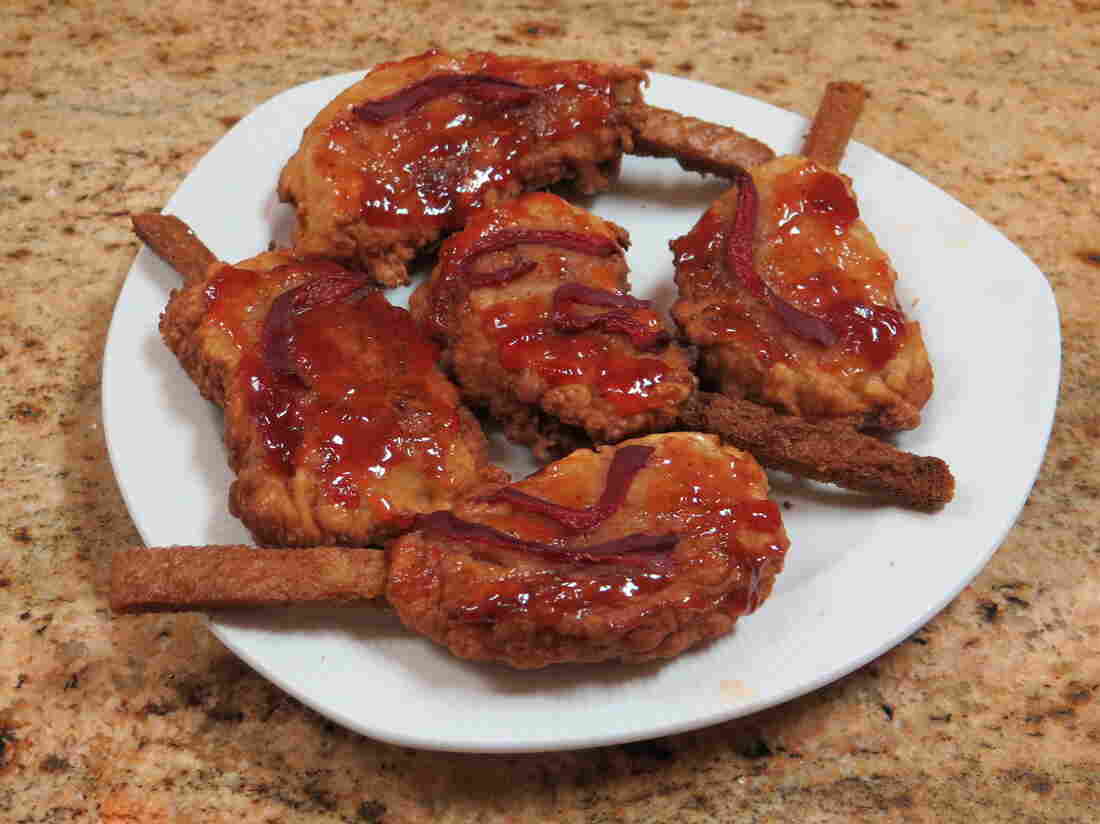 Among the family recipes handed down to Milgrom is chuletas, the Spanish word for pork chops. Made from bread and milk, the dish is basically French toast that's been fried in the shape of a pork chop and dressed up with tomato jam and pimentos. Crypto-Jews would have eaten it so that their Catholic neighbors and employees would not suspect they still kept their faith in secret. Greg Allen/NPR hide caption 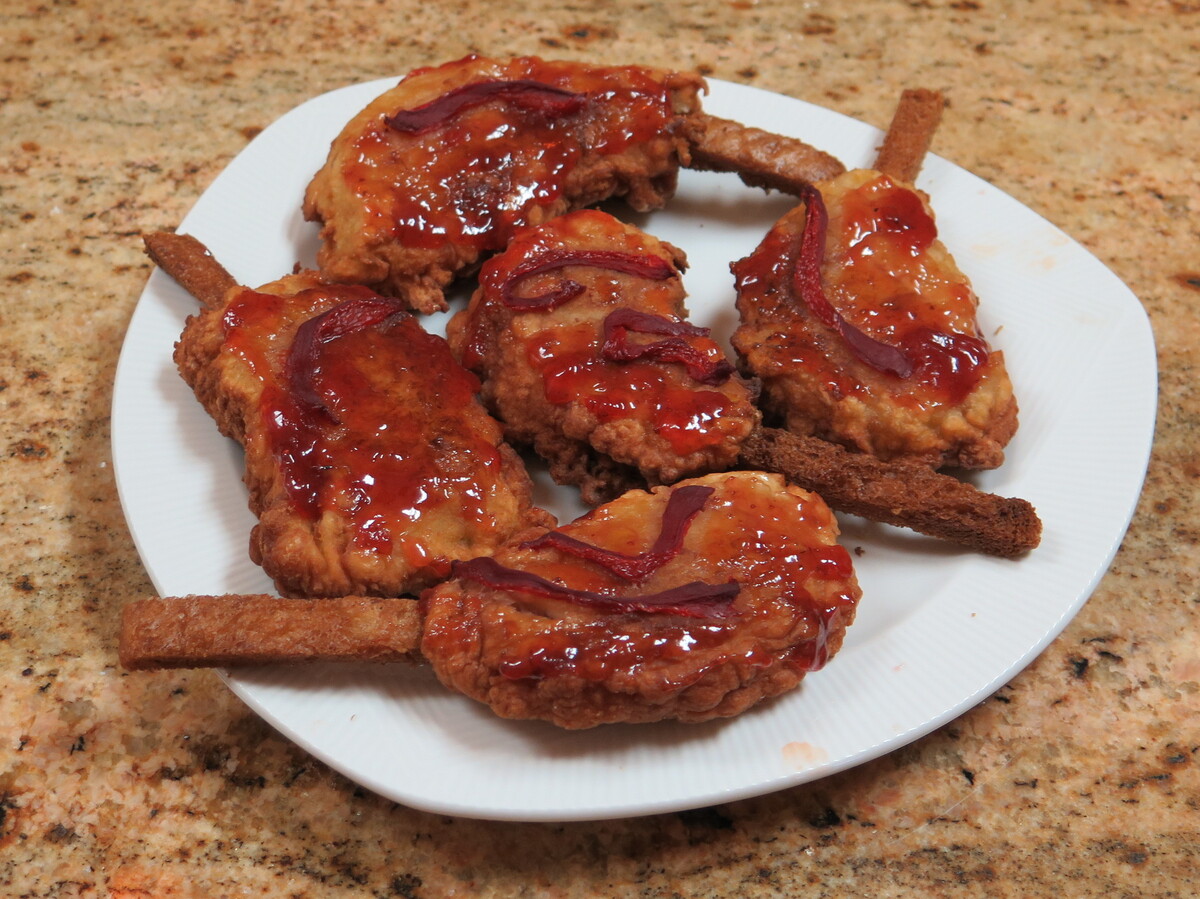 Among the family recipes handed down to Milgrom is chuletas, the Spanish word for pork chops. Made from bread and milk, the dish is basically French toast that's been fried in the shape of a pork chop and dressed up with tomato jam and pimentos. Crypto-Jews would have eaten it so that their Catholic neighbors and employees would not suspect they still kept their faith in secret.

Jewish dietary laws forbid the consumption of pork, so these chuletas were eaten as a sort of cover, she explains. "It was the kind of thing that the crypto-Jews had to be eating to disguise to their neighbors and to the people who worked for them that they were [not, in fact,] eating pork." In 15th century Portugal and Spain and later, Milgrom says Jews would burn a pork chop in the fire so that their homes smelled like pork while they ate these chuletas.

Those recipes helped confirm something she'd long suspected — that she was descended from Jews who were forced to convert to Catholicism more than 500 years ago during the Inquisition. Some of these converts, called crypto-Jews, secretly continued to adhere to Judaism.

From the time she was very young, Milgrom says she never felt like she fit in. She attended Catholic schools and a Catholic university and married young. But throughout her life, she always felt drawn to the Jewish faith. When her marriage ended after 20 years, she decided to convert to Judaism. "I have always felt Jewish," she says. "Whether its epigenetics, it's in my head, it's in my brain, it's in my soul — not getting religious about this, whatever it is, I am where I belong right now."

Milgrom says her mother and others in her family weren't happy when she decided to convert. But a turning point came when her grandmother died. Her mother insisted on burying her the very next day. It was a family custom she said, consistent with Jewish tradition but unusual for Catholics.

After the burial, Milgrom says her mother gave her a box that her grandmother had wanted her to have. "I opened the box and it was an earring with a Star of David in it and a hamsa, which is an artifact that we wear that is like the Hand of God," Milgrom says, "That is what started me deep into searching my genealogy because in death, she sent me the message, we were Jews." 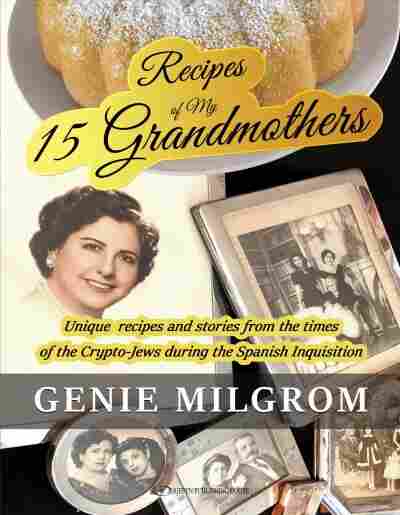 Recipes of My 15 Grandmothers

Milgrom has written several books about her journey. Her latest is a cookbook, Recipes of My 15 Grandmothers. Her research took her to her family's ancestral village, Fermoselle, on the border between Spain and Portugal. Working with local historians there, she found evidence that until the Inquisition, the town had been Jewish.

But it was in the Inquisition records housed in Lisbon that she found what she was looking for. In the 16th and 17th generations on her mother's side, the records showed her grandmothers were Jewish. "I finally succeeded in going back 22 generations," Milgrom says. Through her research, she's traced her Jewish roots back to 1405 on her maternal lineage and back even further, to 1110, on her father's side.

She says the records show 45 of her relatives were actually burned at the stake for being Jews. It's a reminder of why her family hid their Jewish customs and centuries later, were still reluctant to talk about them. Milgrom, however, does talk about her heritage and travels around the world speaking about what it means to be a crypto-Jew.

At the launch of her new cookbook at the Jewish Museum of Florida in Miami Beach, she was introduced by Tudor Parfitt, a professor of Jewish studies at Florida International University. Parfitt says especially in Latin America, there's a growing number of people who believe they have Jewish ancestry.

"Genie's a very good example of the phenomenon," he says. "But the phenomenon is very widespread and involves perhaps hundreds of thousands or millions of people."

There are communities with crypto-Judaic roots throughout Latin America. Milgrom, who's active on social media, says she receives between 200 and 400 emails every month from people around the world who are investigating their Jewish roots. Not everyone wants to convert to Judaism, she says; many just want to know their family's history.

"To me, this is not really too much about changing the religion." She says it's more about "righting a historical wrong and being able to say, 'OK, my ancestors were Jewish.' And a lot of people are proud of that."

Finding your Jewish roots is difficult, Milgrom says, because so much of crypto-Jewish history was deliberately erased, often by the families themselves. That's why the recipes are so special, she says. "When I saw them, I said, 'If these grandmothers carried these around for centuries, then it's my duty to honor the fact that they found that it was a treasure to save."

In addition to her new cookbook, Genie Milgrom is part of a group working to digitize the records of Inquisition tribunals in Spain, Portugal, Mexico, Peru and other countries. She hopes making those records available on the Internet will help others trace their family roots and uncover five centuries of suppressed Jewish history.