Accessibility links
Wave Of Dicamba Complaints Prompts Pesticide Regulators To Ask EPA For Help : The Salt Across the Midwest, millions of acres of farmland have been damaged by dicamba, an herbicide that can harm crops not engineered to withstand it. There are so many cases, regulators can't keep up. 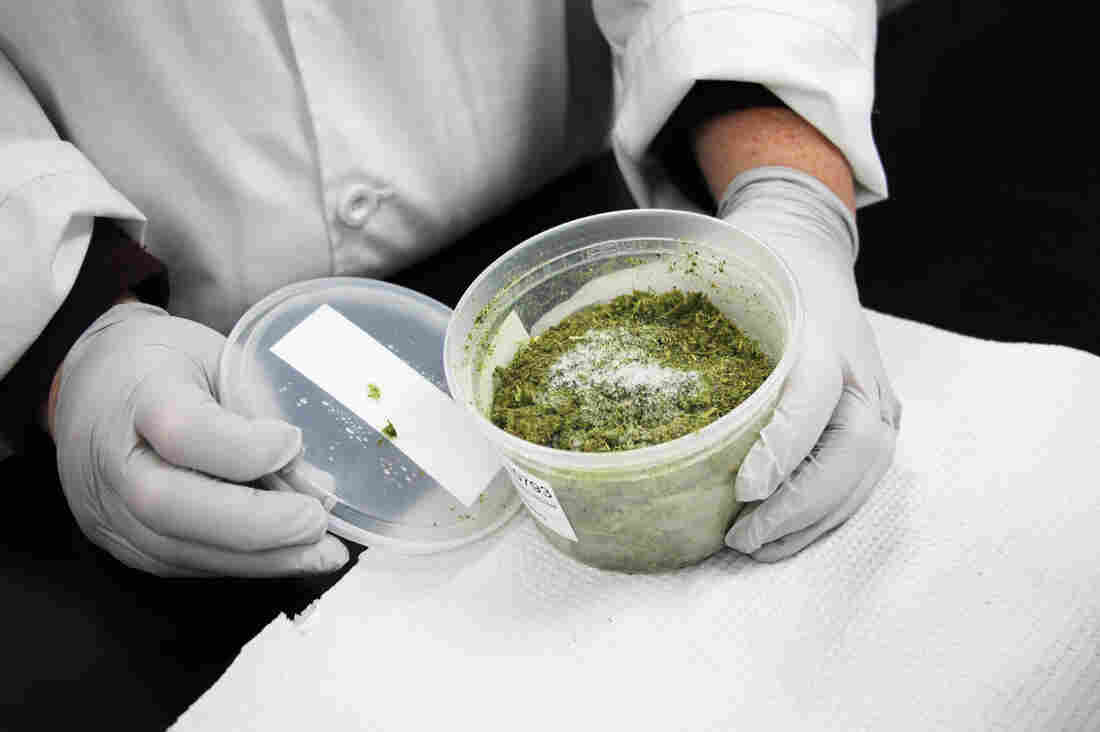 Chopped and frozen samples of damaged soybean plants are kept in storage at the Office of the Indiana State Chemist. Many contain residues of the herbicide dicamba. Dan Charles/NPR hide caption 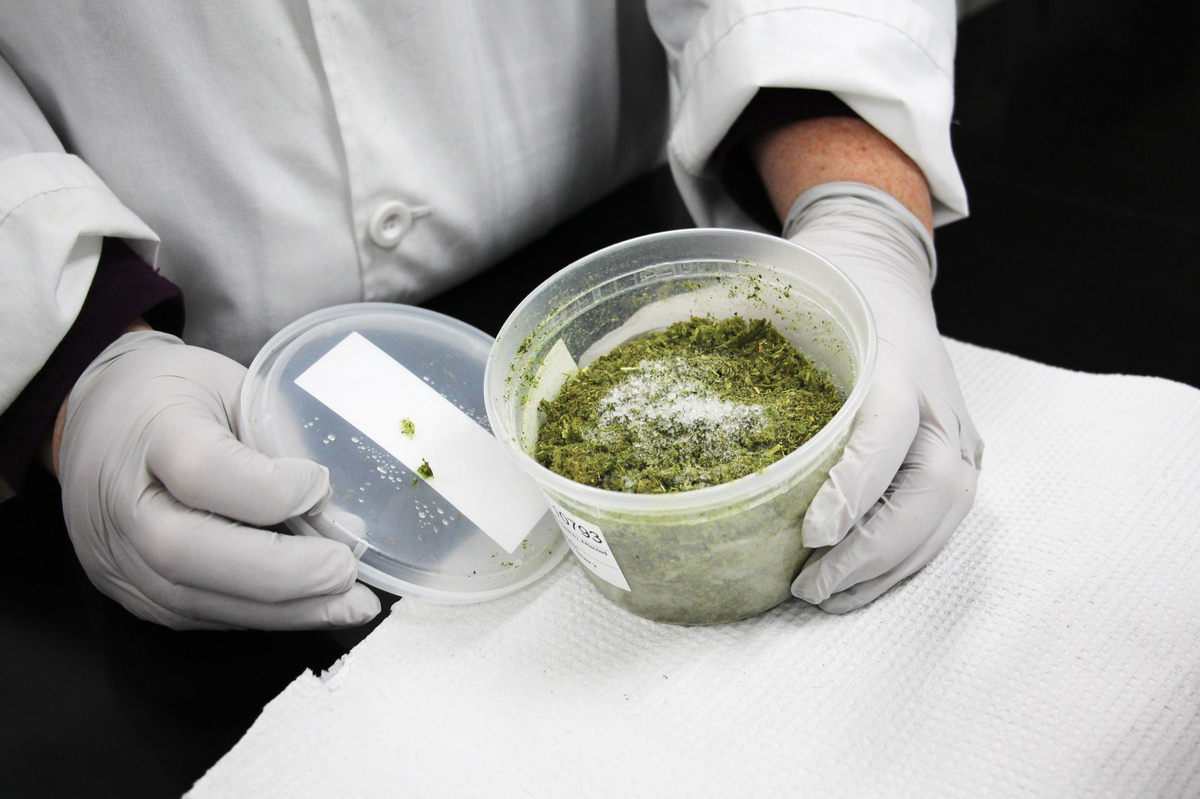 Chopped and frozen samples of damaged soybean plants are kept in storage at the Office of the Indiana State Chemist. Many contain residues of the herbicide dicamba.

Every summer for the past three years, the phones have been ringing like crazy in the Office of the Indiana State Chemist. Farmers and homeowners were calling, complaining that their soybean fields or tomato plants looked sick, with curled-up leaves. They suspected pesticides from nearby farms — a kind of chemical hit-and-run.

It was up to investigators like Andy Roth to find the true culprit.

"It's sort of a mad rush at the beginning," he says. "You rush out, you do the field work, you take the pictures, you take the samples, you get them back here" to the office's forensic laboratory, where soil and plant tissue can be tested for pesticide residues.

The lab staff also was overwhelmed. "The first issue was we quickly reached our maximum storage capacity," says Ping Wan, the lab supervisor. They had to buy more freezers to store the evidence. "There is not an inch of wall space left," Wan says, gesturing toward freezers that line one side of the lab. 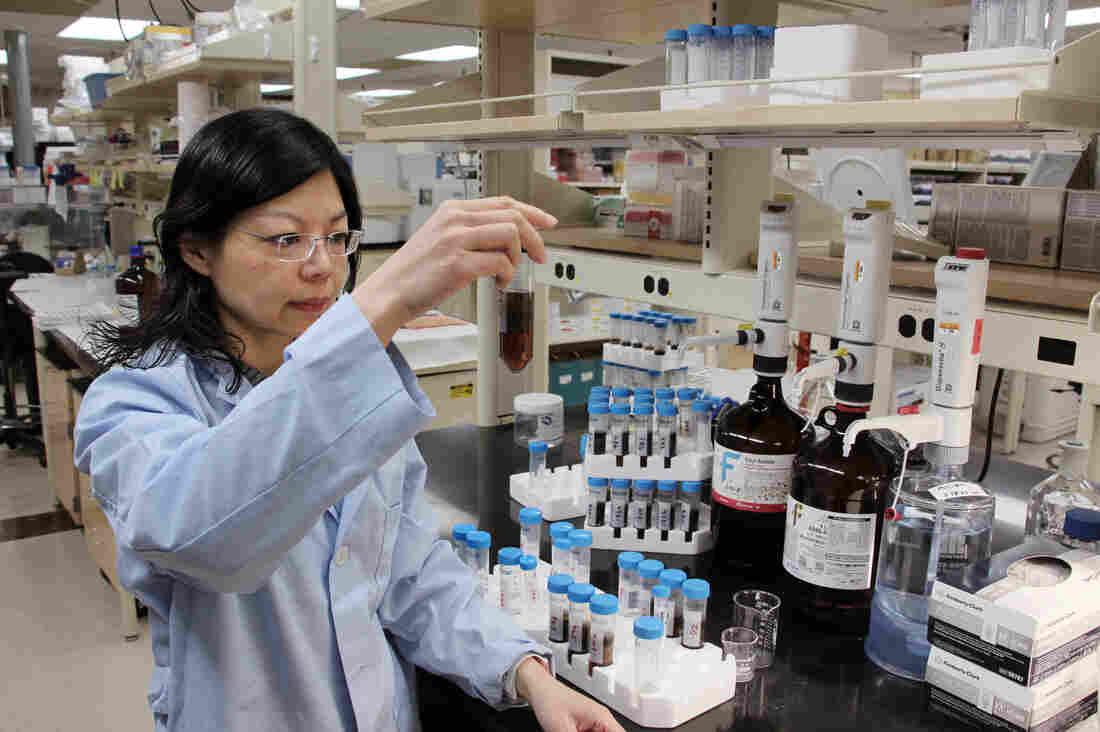 Ping Wan, supervisor of the pesticide laboratory at the Office of the Indiana State Chemist, with samples that may contain pesticide residues. Dan Charles/NPR hide caption 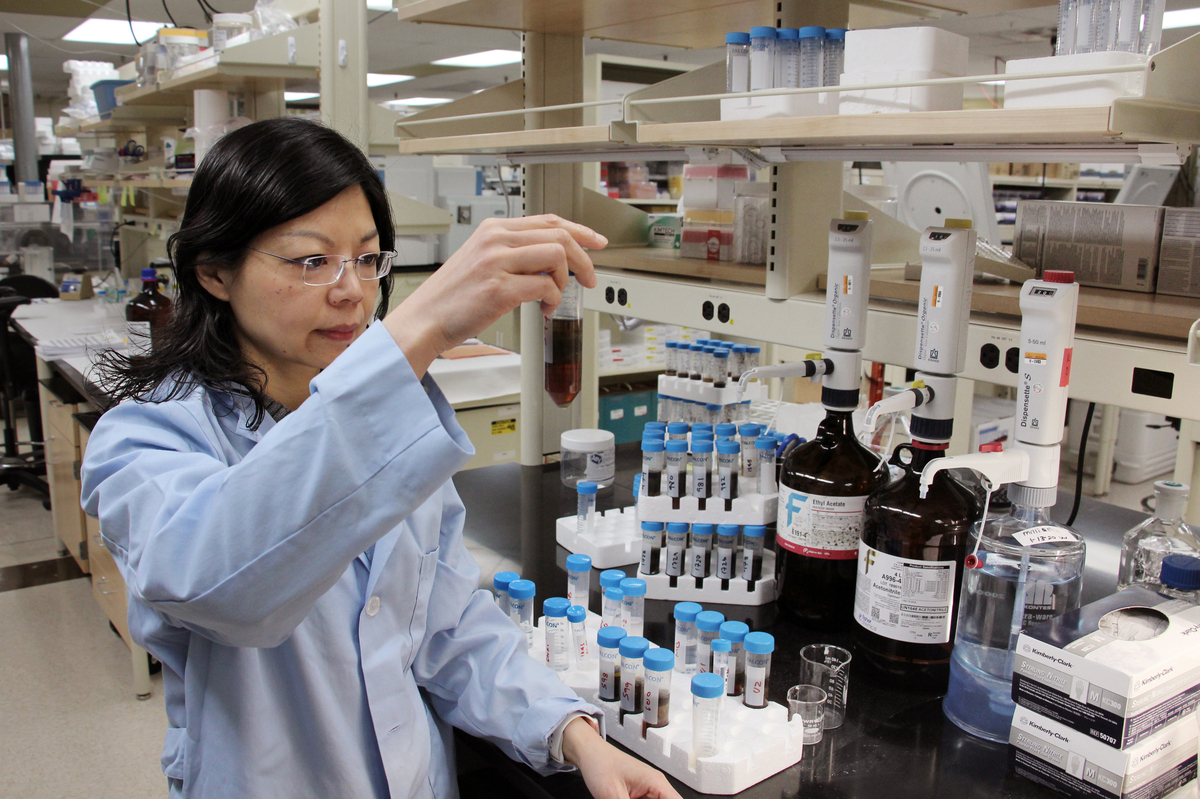 Ping Wan, supervisor of the pesticide laboratory at the Office of the Indiana State Chemist, with samples that may contain pesticide residues.

When tests were done, they showed the same thing over and over again: dicamba.

Dicamba is an herbicide. In late 2016, the Environmental Protection Agency approved a new use for it. Farmers now can spray special versions of dicamba right on top of growing soybean plants, as long as those are special soybean varieties that are genetically engineered to tolerate it. The weeds die, but these crops are fine.

Many farmers love this technology, especially those with fields full of weeds that have become resistant to other weedkillers such as glyphosate, or Roundup. The majority of soybeans planted in America this past year were dicamba-tolerant. 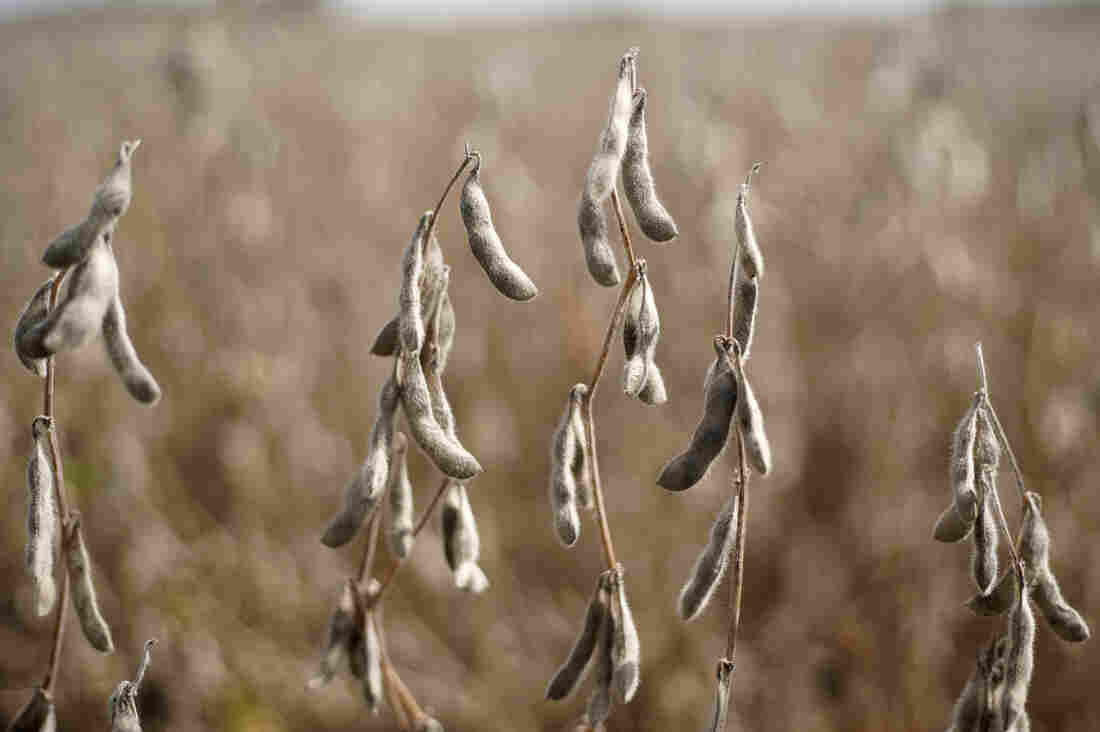 Soybeans are ready to be harvested in a field near Greenwood, Neb. Nati Harnik/AP hide caption

Others, like Lewis Flohr in Frankfort, Ind., who's growing soybeans that can't tolerate dicamba, think it's a plague. "I had about an 80-acre field that was whacked pretty hard by dicamba," he says. He says it cut his harvest on those acres by a third.

The problem with dicamba is it doesn't always stay where it's sprayed. On hot days it can evaporate and drift across the landscape, damaging other plants.

It's been happening on an enormous scale across the soybean farming belt, from Minnesota in the north to Arkansas in the south.

Millions of acres of old-style soybeans have been damaged, as well as vineyards and orchards. Friendships have ended over this. In one dispute between farmers in Arkansas, one of them shot and killed the other. 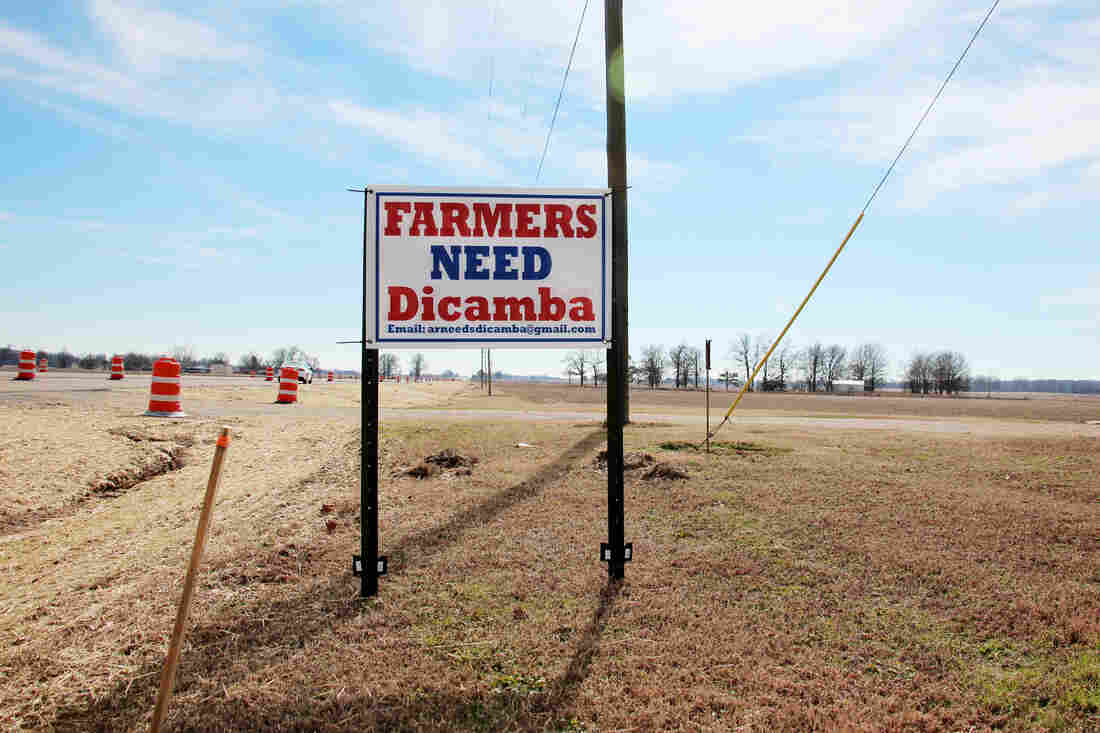 A roadside sign on a field in eastern Arkansas. Dicamba has divided farm communities. Many farmers want to continue using it, despite the risk that they might damage neighboring crops or wild trees. Dan Charles/NPR hide caption

Flohr now sees neighboring farms as a potential threat. "I flat-out tell people, 'I have a lawyer. You know, watch out,' " he says. His neighbors, he says, "think I'm an a**hole."

State agencies are responsible for investigating each report of pesticide drift and figuring out if it happened because someone violated the law. The rules for applying a pesticide are laid out in each product's label, and violating those rules is a crime.

But many have struggled to keep up. In Illinois, the number of complaints soared from about 120 in the pre-dicamba era to more than 700 in 2019. In Indiana, it went from about 60 to 200. "We're just running ourselves ragged, just trying to get out there and collect the evidence," says Dave Scott, who's in charge of Indiana's pesticide investigations. 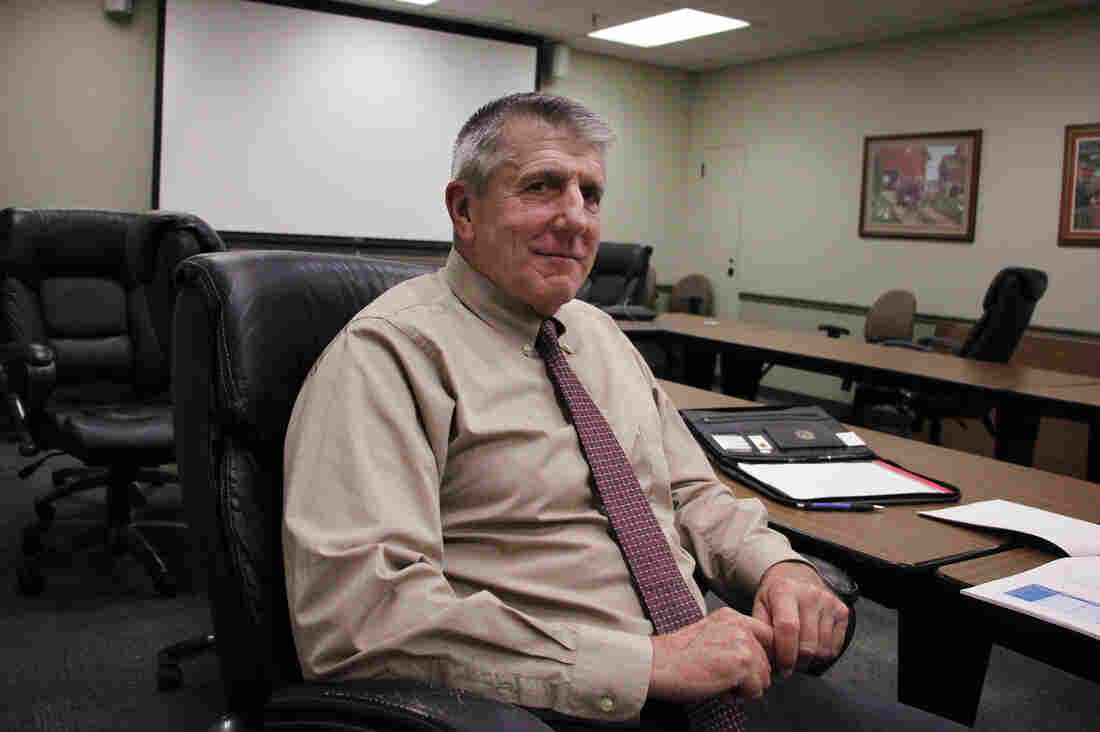 Dave Scott is in charge of pesticide programs for the Office of the Indiana State Chemist. Dan Charles/NPR hide caption 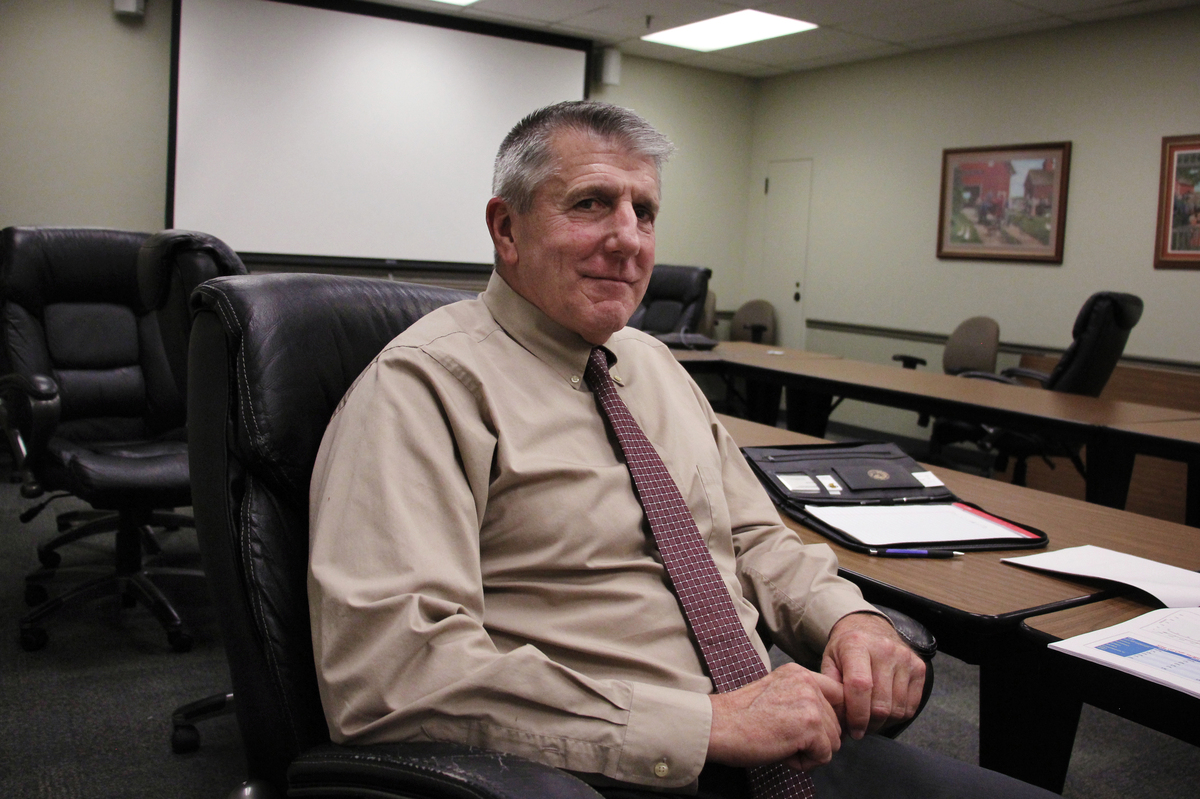 Dave Scott is in charge of pesticide programs for the Office of the Indiana State Chemist.

It's also frustrating. Roth, the field investigator, often sees dicamba damage across entire fields. He can't figure out which direction the vapor came from, or whom to hold accountable.

"Some days, you go, 'Am I doing any good? Am I making an impact here? Or am I just spinning my wheels?' " he says.

Meanwhile, because they're fully occupied with dicamba complaints, inspectors don't have time for all their other work, such as routine inspections of pesticide use at schools, golf courses or businesses.

"I think that most affected states would all agree that it's not acceptable to continue with this number of complaints. It's just not acceptable," says Leo Reed, another Indiana official who is also president-elect of the Association of American Pesticide Control Officials.

But the EPA actually extended its approval of dicamba just a year ago, before the 2019 growing season. The agency decided the problems could be addressed with a few new restrictions on how and where dicamba can be sprayed, along with more training for people who use it.

Those changes did not fix the problem, Reed says. "As a matter of fact, the complaint numbers went up" in Indiana and several other states.

In some states, like Missouri, there were fewer dicamba-related complaints: The number fell to 98 in 2019 after spiking to 315 in 2017. Dawn Wall, pesticide program administrator for the Missouri Department of Agriculture, says that the EPA's additional restrictions "contributed significantly to our numbers decreasing." Other factors, though, may have played a greater role. According to a recent survey of farmers in Missouri, 80% of them aren't bothering to file formal complaints anymore, in large part because they don't think it does any good.

"You know, I've used the phrase 'dicamba fatigue,' and it's a very real thing," says Reed, from the Office of the Indiana State Chemist.

Another possible sign of dicamba fatigue: All but one of Missouri's eight pesticide inspectors left their jobs within the past year and a half. Dawn Wall, the Missouri official, says that there was no single reason for the rapid turnover. According to minutes of meetings between state pesticide enforcement agencies, though, heavy workload and burnout were contributing factors.

Reed says that EPA staff have spent a lot of time trying to come up with solutions. "It's not as if the folks that we deal with in the [EPA's] Office of Pesticide Programs are uncaring. They care very much. They worked really hard trying to come to the right conclusion," he says. Yet the problems continue.

Last November, a group of state officials, including Reed, had a conference call about dicamba with officials at the EPA. According to Reed, the state representatives posed a question: "Are crinkled soybean leaves an 'unreasonable adverse effect'? Because if they are, then this product is federally misbranded." Under the law, Reed says, "If a product is misbranded, then it can no longer be sold or used."

NPR asked the EPA the same question. An agency spokesperson said, by email, that damage to plants can be an unreasonable adverse effect, but it depends on the extent of the damage, balanced against the benefits of spraying the pesticide.

A lot of farmers don't want to give up those benefits. Nor does the company Bayer, formerly Monsanto, which sells dicamba herbicide and dicamba-tolerant soybean and cotton seeds. Those products account for billions of dollars in annual revenue. In a statement to NPR, Bayer wrote that "our growers tell us that they value the proven performance of the system, with a three year 95% satisfaction rate average by farmers who used [it]."

The EPA's authorization to use dicamba in this way, however, will expire at the end of 2020. At that point, the agency will have to decide, once again, whether to let farmers keep spraying this chemical on their soybean and cotton crops.