Accessibility links
Warm Winters Threaten Nut Trees. Can Science Help Them Chill Out? : The Salt Many fruit and nut trees need cold weather to bloom, which is becoming less common in a warming climate. So, farmers and scientists are teaming up to find ways to help orchards chill out and cope. 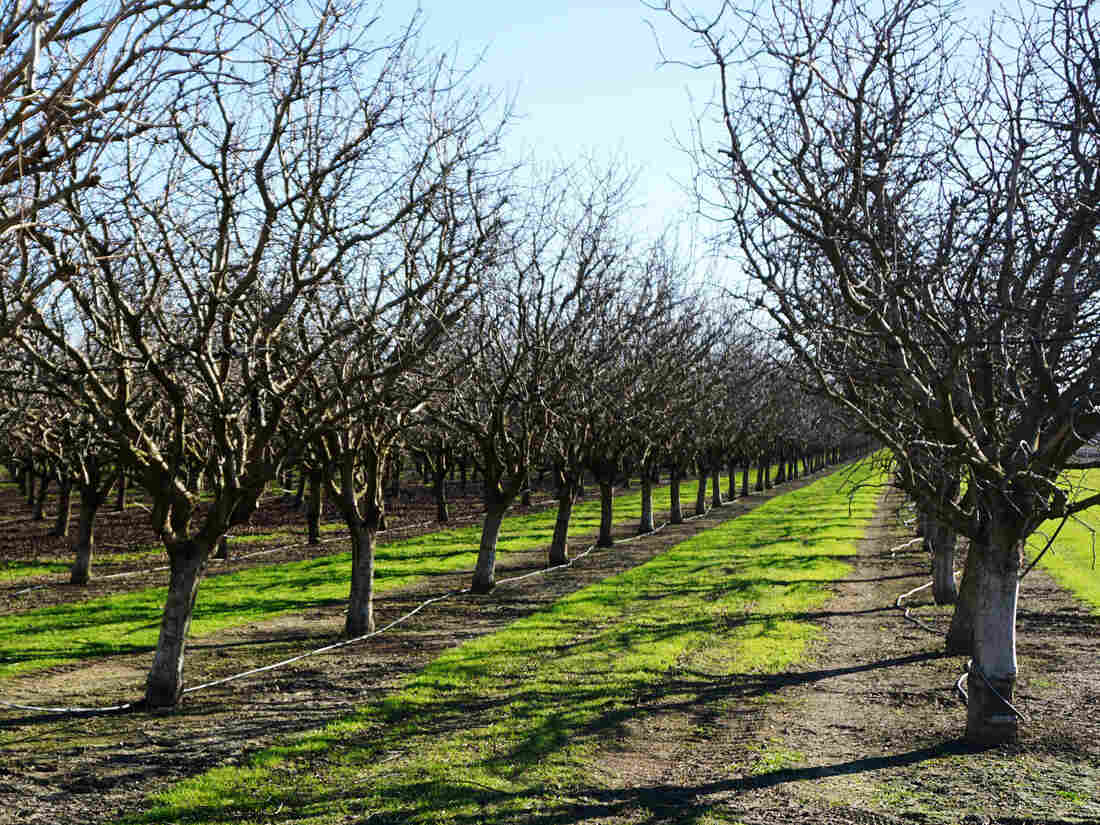 The cold temperatures that pistachio trees need to bloom on time are becoming more scarce as winters get warmer. Lauren Sommer/NPR hide caption 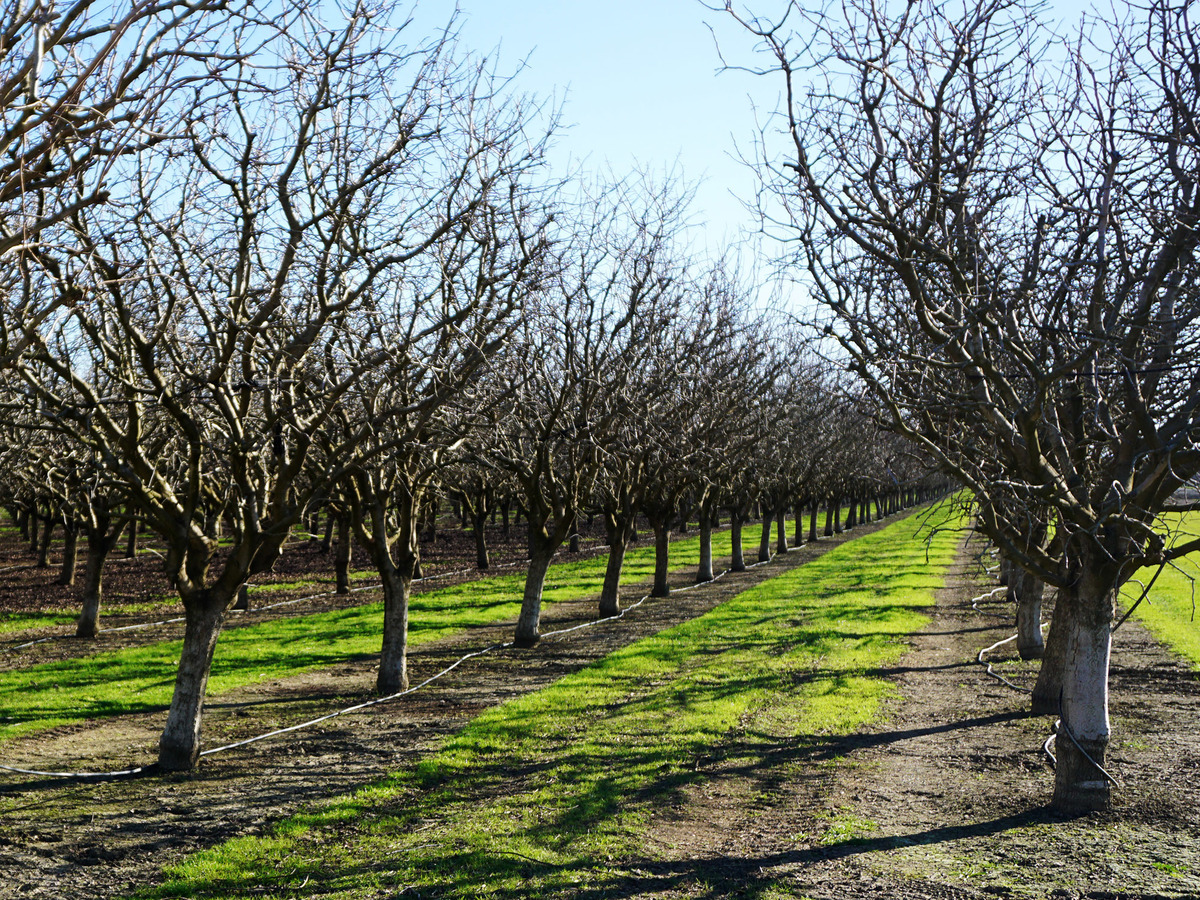 The cold temperatures that pistachio trees need to bloom on time are becoming more scarce as winters get warmer.

In love, timing is everything, the saying goes. The same is true for fruit and nut orchards in California's Central Valley, which depend on a synchronized springtime bloom for pollination. But as winters warm with climate change, that seasonal cycle is being thrown off.

Cold is a crucial ingredient for California's walnuts, cherries, peaches, pears and pistachios, which ultimately head to store shelves around the country. The state grows around 99% of the country's walnut and pistachio crop.

Over the winter, the trees are bare and dormant, essentially snoozing until they wake up for a key reproductive rite.

"In the pistachios, the females need to be pollinated by the males trees," says Jonathan Battig, farm manager for Strain Farming Company in Arbuckle, Calif. "Ideally, you'd like the males to be pushing out the pollen as the females are receptive."

In Battig's orchard, one male tree is planted for every 20 female trees, though an untrained eye couldn't tell them apart.

"I know by just looking at them," says Battig. "The buds on the males are usually more swollen."

In March or April, if all goes well, both trees will bloom so the wind carries the male trees' pollen to the females.

"For that to happen, the timing needs to line up pretty close," he says.

But several times in the last decade, that timing has been out of sync. The male trees haven't bloomed at the same time as females because the winter was too warm.

Pistachios and many other trees need to experience "chill hours," spending hundreds of hours below 45 degrees. (Another way to measure is with "chill portions," which take a broader range of temperatures into account.) The most common male pistachio variety requires more chill hours than the female trees.

Without that down time, the trees don't wake up normally in the spring and they bloom late or erratically. That means fewer pistachios — or at harvest time, farmers will find "blanks," shells with no nut inside. 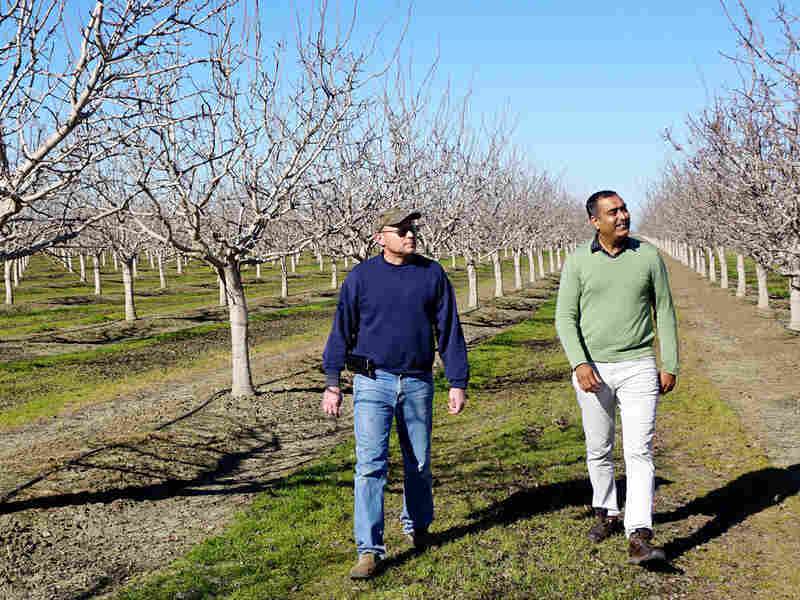 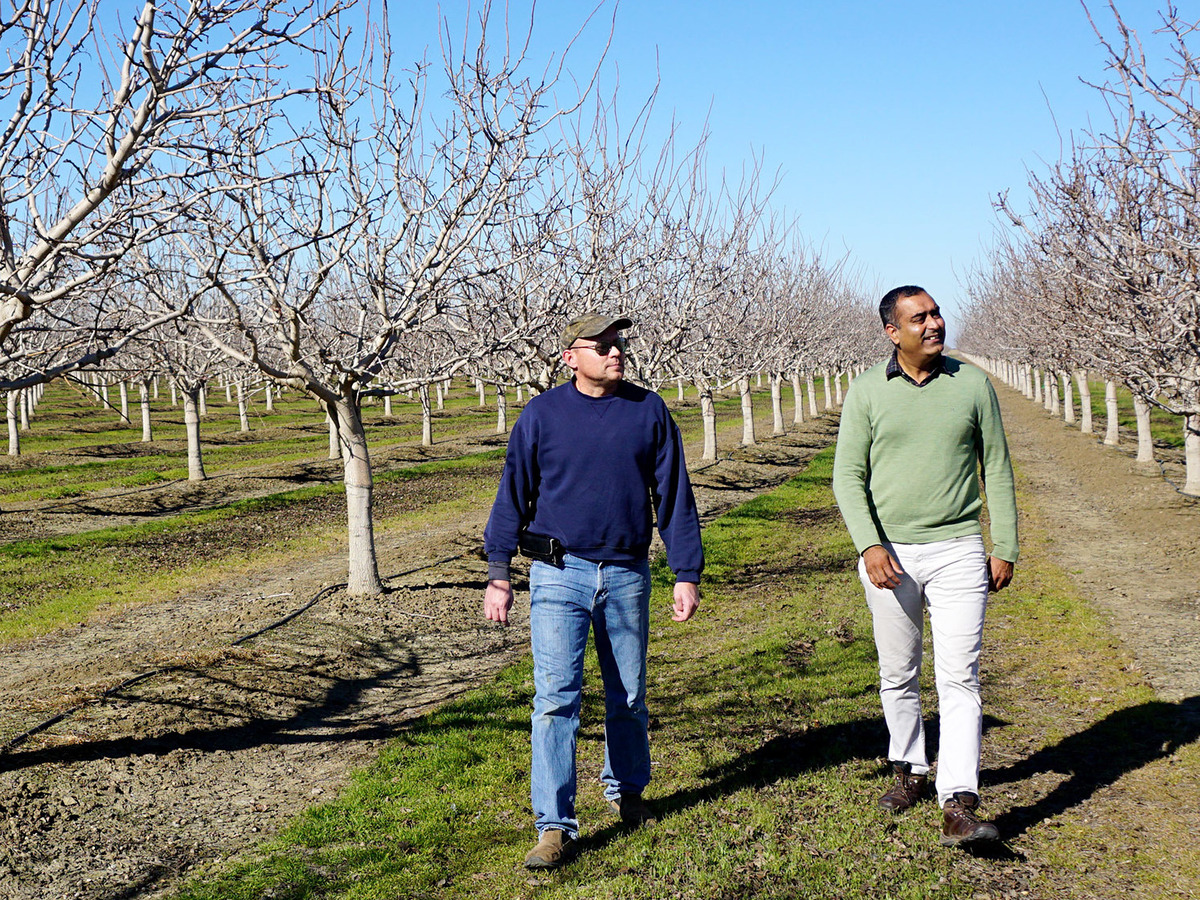 "Now, with the weather changing, it's becoming more of a challenge to get those chill hours," Battig says.

Plus, if winter daytime temperatures are really warm, that cancels out chill hours the trees have already accumulated. So, Battig is teaming up with scientists in search of a way to "trick" the trees into thinking they've been colder.

"So, what we are doing is we are spraying at different chill accumulation milestones," says Gurreet Brar, a professor at California State University, Fresno, as he clips pistachio buds in a test plot that Battig manages.

These test trees have been "oiled," covered in an oil-based horticultural spray. Normally, the spray is used on fruit and nut trees to control insects, but it's also been known to alter the tree's dormancy period.

"It's supposed to help the tree and the buds wake up normally and have a normal bloom," says Brar.

The hope is that in warm winters, farmers could use the oil to wake the trees up on time. But so far, the results haven't been very predictable.

"The oil sprays work in some cases," he says. "In some cases, they don't. So it has been hit or miss."

Horticultural oil is one of several chemicals that scientists are looking into, as a way to help farmers cope with warming temperatures. According to one study, winter chill could decline as much as 60 percent in the Central Valley by the end of the century. Battig says not all of his neighbors talk about that.

"This is a pretty conservative area," he says. "But me personally, I do feel something is going on and the climate is getting warmer. There are people who choose to ignore it, but I don't."

"We're on this march and it's really just a matter of how bad it's going to be, not whether it's happening or not," says Katherine Jarvis-Shean, an orchard specialist with the University of California Cooperative Extension who helps farmers adapt to climate change. "Threatening those crops is really threatening the livelihoods of a lot of Californians."

Central Valley winters have already warmed 2 degrees Fahrenheit on average or more, depending on the location. So, varieties of orchard trees requiring the most chill will run into trouble by mid-century. That includes some kinds of peaches, apricots and pears, as well as Golden Delicious apples, Chandler walnuts and Kerman pistachios.

"Bing cherries, which is really the marquee variety in California, won't get enough chill," she says. "We'll need to be breeding new varieties that still have that rich ruby flesh and that juicy flavor that can do well under those low chill conditions."

Better-adapted trees may be the only strategy in the long-run, she says. Efforts are already underway to breed new varieties of pistachios that can handle warmer winters.

Still, breeding new trees can take 20 years — and farmers will need those trees soon, she says. Orchards live for three to four decades, so the trees being planted today will have to cope with a very different climate.