Accessibility links
Food Shortages? Nope, Too Much Food In The Wrong Places : The Salt Some Americans, fearing food shortages from COVID-19, have cleaned out supermarket shelves. Yet there's too much food in some places. Farmers are dumping milk and vegetables that they can't sell. 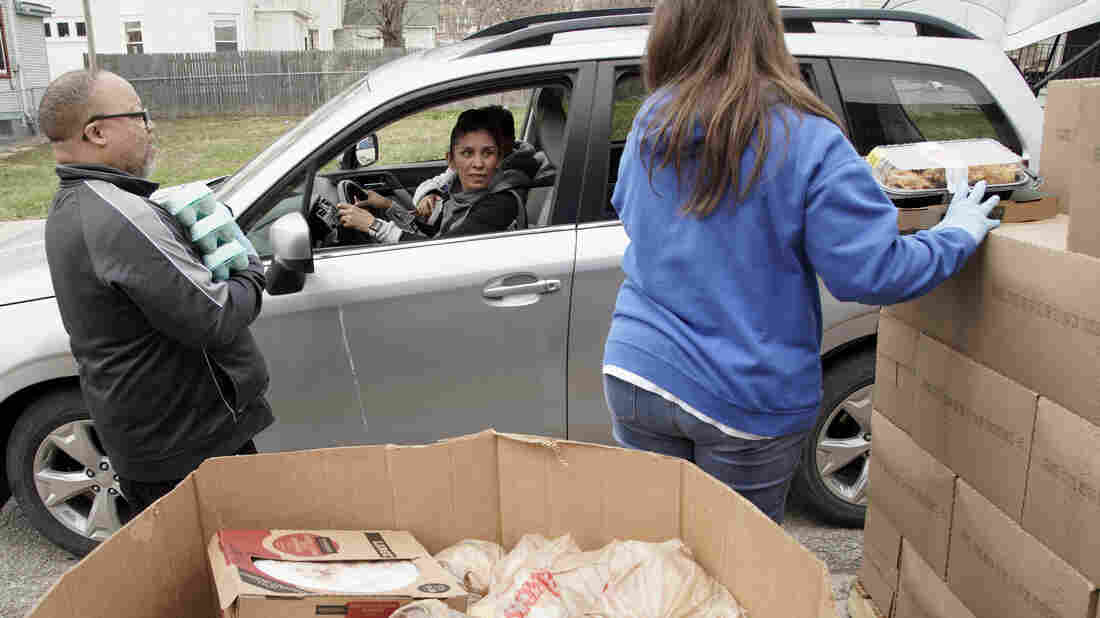 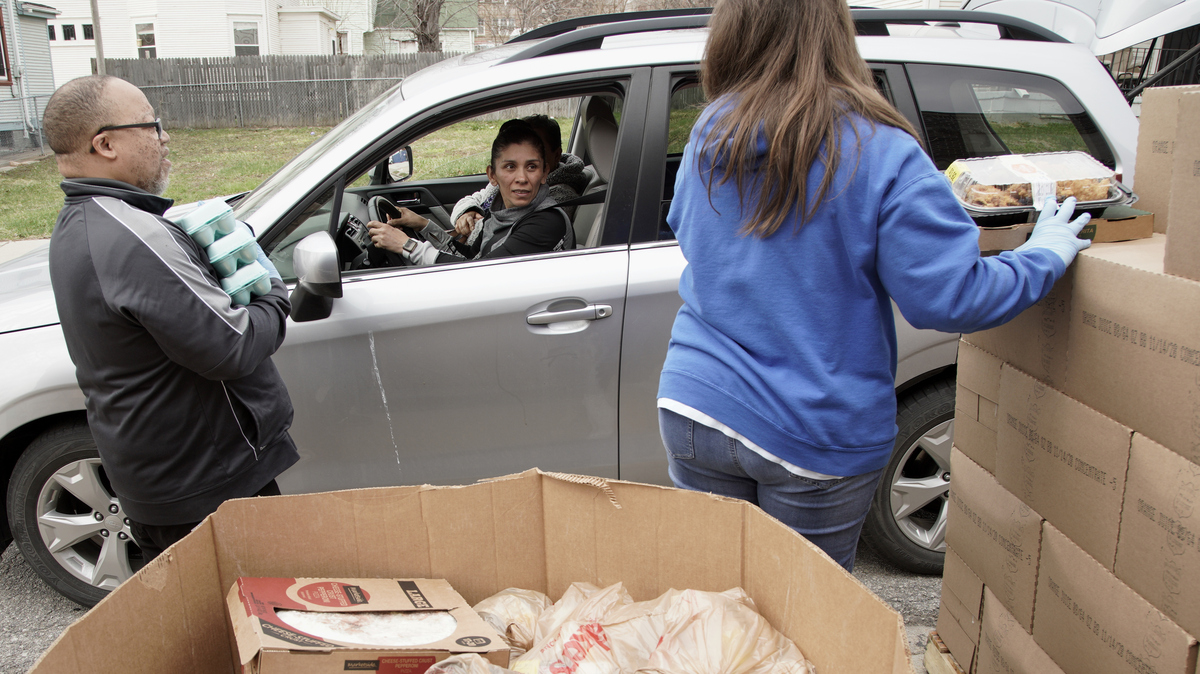 Together Inc. food bank workers distribute food at a drive-through location in Omaha, Neb., last week. Disruptions in the agricultural supply chain caused by the coronavirus pandemic are making it difficult for food banks.

In recent days, top U.S. government officials have moved to assure Americans that they won't lack for food, despite the coronavirus.

As he toured a Walmart distribution center, Vice President Pence announced that "America's food supply is strong." The Food and Drug Administration's deputy commissioner for food, Frank Yiannas (a former Walmart executive) told reporters during a teleconference that "there are no widespread or nationwide shortages of food, despite local reports of outages."

"There is no need to hoard," Yiannas said.

In fact, the pandemic has caused entirely different problems: a spike in the number of people who can't afford groceries and a glut of food where it's not needed.

Dairy farmers in Wisconsin, Minnesota and Georgia have been forced to dump thousands of gallons of milk that no one will buy. In Florida, vegetable growers are abandoning harvest-ready fields of tomatoes, yellow squash and cucumbers for the same reason.

"We cannot pick the produce if we cannot sell it, because we cannot afford the payroll every week," says Kim Jamerson, a vegetable grower near Fort Myers. Those crops will be plowed back into the ground. "We'll have to tear 'em up," Jamerson says. "Just tear up beautiful vegetables that really could go elsewhere, to food banks, and hospitals, and rest homes."

The country's food distribution system, in normal times, is a marvel, efficiently delivering huge amounts of food to consumers. But it relies on predictability, like a rail system that directs a stream of trains, on set schedules, toward their destinations. Now, some of the biggest destinations — chain restaurants, schools and workplace cafeterias — have disappeared, and supply chains are struggling to adapt.

Jay Johnson, with JGL Produce, a vegetable broker in Immokalee, Fla., is the kind of person who makes this system work — matching buyers with sellers. "You're getting phone calls, text messages, emails, all day and all night," he says. " 'What's your price on this? What grade? Can you do a better deal?' You're doing all these micronegotiations throughout the day."

On Tuesday, March 24, he says, that all changed. "Everything got quiet. Wednesday, the 25th, superquiet. Thursday, now we're getting nervous."

Normally, chain restaurants buy a steady supply of produce, week after week. But most have shut down — and did so just as Florida's vegetable harvest shifted into high gear. "Now you're sitting there with all this production, perfect weather, and everybody's like, 'Oh no,' " Johnson says.

He told vegetable grower Mike Jamerson, Kim's husband, that "we're in trouble here. And it's to the point where I'm going to fill my warehouse up and I'm going to have to tell you to stop picking." That's when workers stopped picking yellow squash on Kim Jamerson's farm.

A week after Jamerson told NPR that they'd have to "tear up" their crops, the situation had improved a bit. Workers have resumed picking, but it's now a "salvage operation," Jamerson says. Workers are discarding vegetables that weren't picked in time. The vegetables that they salvage will be sold at cut-rate prices, with some going to food banks.

Something similar has happened to dairy farmers. Milk sales in supermarkets have increased, but not enough to make up for the drop in sales of milk to schools and cheese to Pizza Hut. Factories that make milk powder can't take any more milk. So some milk cooperatives have told their farmers to dump the milk that their cows are producing.

The situation is especially dire for Florida's tomato growers, who sell 80% of their production to restaurants and other food service companies, rather than to supermarkets. "Think about all the sandwiches that people eat at lunch when they go out. Burgers, or salads at restaurants," says Michael Schadler, from the Florida Tomato Exchange, which represents some of the state's largest growers. "Many of those food service items have tomatoes."

Schadler says growers already are "walking away from big portions of their crop," writing off huge investments.

Meanwhile, food banks and pantries are having trouble supplying enough food to people who need it, including millions of children who no longer are getting free meals at school and people who've lost jobs in recent weeks.

Claire Babineaux-Fontenot, CEO of Feeding America, a network of food banks and charitable meals programs, says that these programs normally receive large donations of unsold food from retail stores. In recent weeks, though, as retailers struggled to keep their shelves stocked, "we're seeing as much as a 35% reduction in that donation stream from retail," Babineaux-Fontenot says.

Food banks are trying to claim more of the food that is stranded in the food service supply chain, either through donations or by buying it.

Kim Jamerson thinks "it's just a shame" to have enough food, but not be able to get it to the people in need. "A woman who's got two kids how can she live on unemployment, go into a grocery store and pay 90 cents for a cucumber? She just can't do that."

Part of the problem is that it takes labor to move produce from one place to another, and people are still figuring out who will pay for that. Jamerson says she can't afford to pay workers to pick a crop that will be donated. She wants the government to step in, provide workers or the money to pay them, and make sure food gets to where it's needed. "The government could send the food to the hospitals, the rest homes, to the food banks, to the churches," she says.

Jay Johnson, the produce broker, says there are signs of hope. The food banks in Florida, he says, are starting to buy some of his vegetables and figuring out new ways to distribute them.

They asked Johnson to pack some vegetables in smaller packs, so food banks don't need so many volunteers to repack them. "They're understaffed, and don't have warehouse space, and they're having to think creatively," he says.

"I see a little bit of light at the end of the tunnel here," he says, adding that he won't make money on those sales to food banks. Farmers won't either, but at least they'll be able to keep their workforce employed until, hopefully, better times arrive.