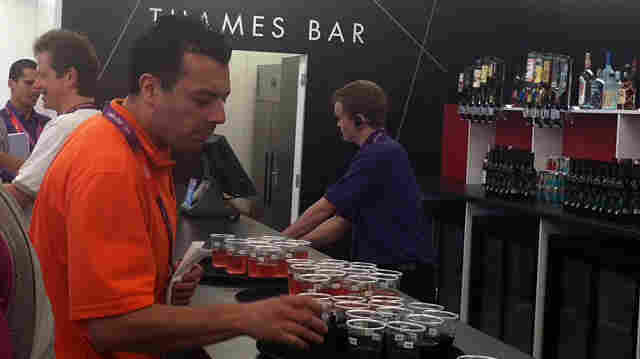 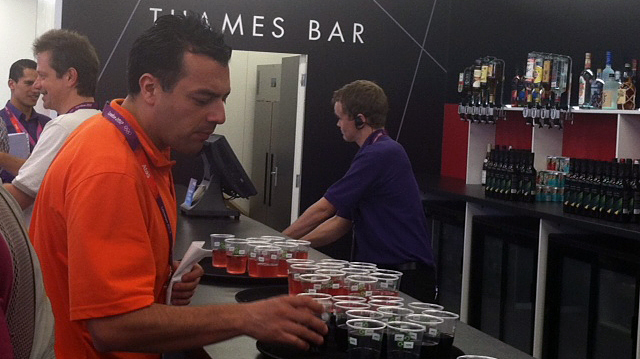 The "Thames Bar" was flowing with free drinks Monday, as the London 2012 group welcomed journalists to the Main Press Center.

In the Main Press Center, where thousands of journalists are gathered to cover the London 2012 games, the call went out Monday: Let the drinking begin!

It was all part of a welcome party for journalists covering the Summer Olympics. First, cute kids from a nearby elementary school serenaded the group. The next thing you knew, London 2012 chairman Sebastian Coe was talking about cheap booze.

Coe hosted the welcome party, which doubled as a celebration of the gleaming new media center in East London. Coe started out by telling the group that the price of beer in the center had been reduced.

He then used a hyphenated phrase for drunkenness that isn't quite as common in the U.S. as it is in Britain, to illustrate the point that while journalists would have no call to be angry, they might just be a bit sloshed.

After exhorting journalists to enjoy the center (and to do a good job covering the games), Coe adjourned the event by inviting everyone to the bar, where drinks would be on the house. Never mind that it wasn't very long after lunch. It was all in the time-honored tradition of keeping the press corps happy.

The choices included different kinds of wine, plus pigs-in-blankets and fancy fish sticks. After all those refreshments, you might think people would want to take a nap. And there's place for that, too. The Olympic Quiet Room, where soused — or just exhausted — journalists can catch a few winks.