Accessibility links
Olympic Sports We Don't See Any More, And Why : The Torch The Olympic Games doesn't just seem like one of the most tradition-bound sporting events in the world — it is. But that doesn't mean the sporting events are written in stone. Some past duds: 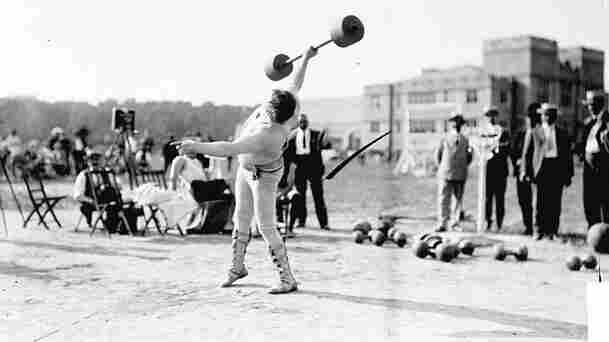 Who needs two hands? At the 1904 Olympics in St. Louis, the events included All Around Dumbell, which comprised 10 one- and two-handed lifts. Chicago History Museum/Library of Congress hide caption 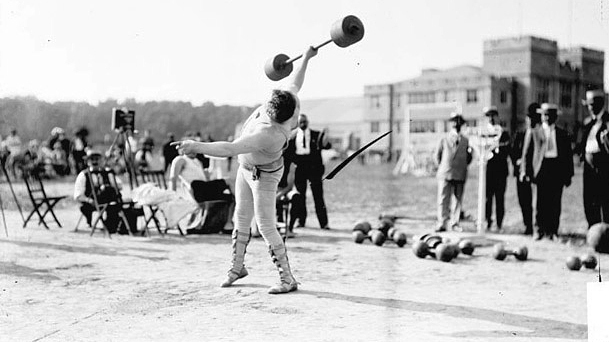 Who needs two hands? At the 1904 Olympics in St. Louis, the events included All Around Dumbell, which comprised 10 one- and two-handed lifts.

Since 1894, dozens of events have had their flash in the pan, and been dumped. Some have lasted only one Olympic cycle. The website Top End Sports has a nice collection of discontinued Olympic events.

Here are some of my favorite one-and-dones:

So that prompts the question: Why do Olympic sports change so much? Some of it's due to host countries' attempts to lard their own results. Croquet was one example — almost all entrants were French. An extreme case was 1896's 100-Meter Freestyle For Sailors, in which only (host) Greece's sailors could compete.

But there's also something else at work: the urge to be relevant. For a clue, look at Olympic BMX, and U.S. racer Nic Long. Bicycle Motocross "went Olympic" at the Beijing 2008 Games. It's seen as the equivalent of adding snowboarding to the Winter Olympics — putting an "X Games" flourish on a venerable event.

As an AP profile of the tattooed racer puts it, "Long represents the new face of the Summer Games, a splash of ink on the chaste body of the International Olympic Committee, a calculated effort to connect with younger audiences, an attempt to get hipper, cooler."

And just as there have always been young people, there have always been attempts to keep up with the times. That would explain why bike polo might make a return as an Olympics demonstration sport, as writer David Goldblatt (How to Watch the Olympics) recently told NPR's Robert Siegel on All Things Considered.

But if they really want to go after young viewers, the IOC might consider bringing back every kid's favorite: the Tug of War.

According to the Olympics' archives about the Tug, "The Olympic champions were as follows: 1900: a combined Swedish/Danish team; 1904: an American club team representing the Milwaukee Athletic Club; 1906: Germany/Switzerland; 1908: a British team from the City of London Police Club..." and so on, up until its demise in 1920.

Of course, the Olympics probably made its best call after the 1904 Games, when it eliminated the All Around Dumbbell Contest. The event was held just once, at host city St. Louis. And yes, I know, I know: an American won.