Accessibility links
Would You Rather Win Silver Or Bronze? (Be Careful What You Wish For) : The Torch If you had to choose between a silver medal and a bronze medal, most people would choose silver. But psychologists who analyzed photos of Olympic medalists say that there's a complicated dynamic at work. 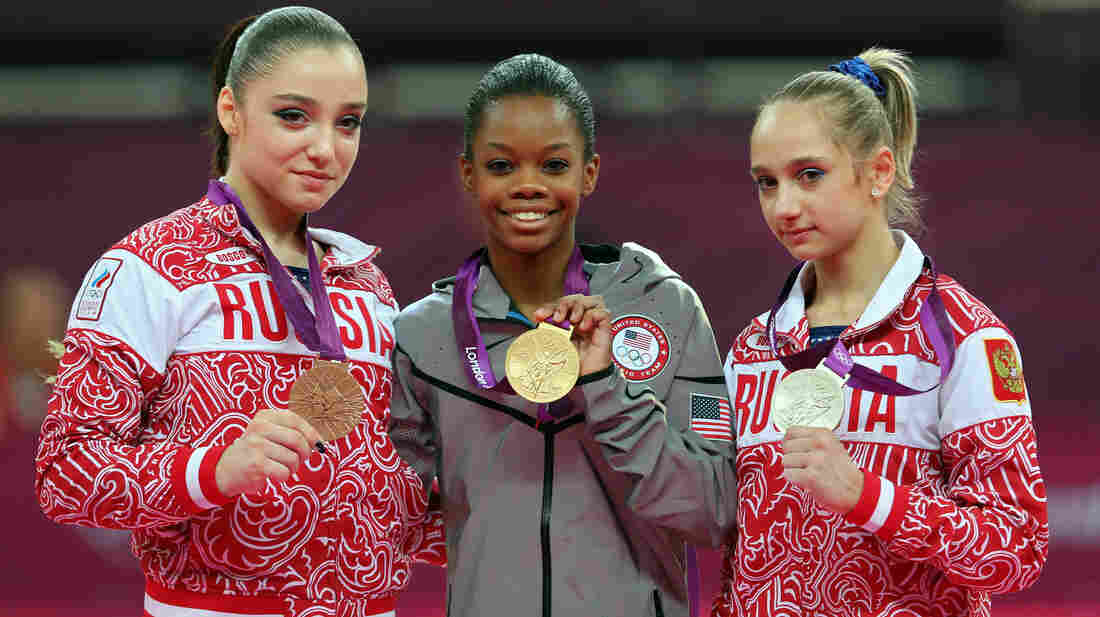 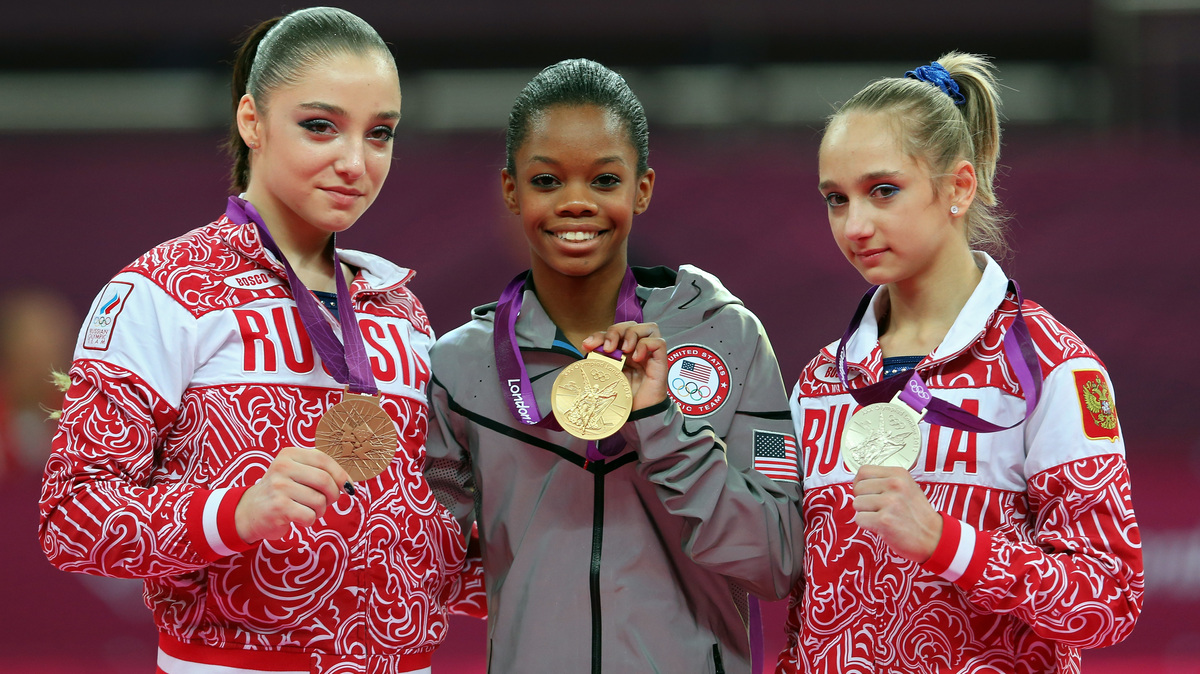 Who's The Happiest? Researchers studied photos of Olympic medalists to learn who is the happiest. Here, bronze medalist Aliya Mustafina of Russia, gold medalist Gabby Douglas of the U.S., and silver medalist Victoria Komova of Russia pose after the all-around gymnastics final.

Both athletes were U.S. swimmers, both were dripping wet after finishing an Olympics final, and both had just won medals.

The first said, "It's not my normal specialty. ... We went out there and raced tough – and just came up a little short."

The second had a beaming face. He said, "[I] swam my own race. And knew I had a lane, and had an opportunity, and I went for it. It worked out, you know, it's just awesome that I get to go on the podium tonight. Honestly, I'm really proud of myself!"

The disappointed athlete was Ryan Lochte, seconds after the 4x100m freestyle relay at the London 2012 Olympics. The guy who was thrilled? Brendan Hansen, just seconds after the 100-meter men's breaststroke finals.

Hansen put an exclamation mark on his delight when he exclaimed, "This is the shiniest bronze medal you will ever see. Ever."

For decades, psychologists have noted an irony in elite athletic competition: If you set aside the happy people who win gold and look only at the people who come in second and third, it's the men and women with bronze medals who invariably look happier than the athletes who won silver.

More than a century ago, William James noted: "So we have the paradox of a man shamed to death because he is only the second pugilist or the second oarsman in the world. That he is able to beat the whole population of the globe minus one is nothing; he has 'pitted' himself to beat that one; and as long as he doesn't do that nothing else counts."

In a paper they published after the 1992 Barcelona Olympics, researchers Victoria Medvec, Scott Madey and Thomas Gilovich evaluated photographs of athletes on the victory podium and also studied post-competition audio interviews. They found bronze medal-winners tended to be happier than silver medalists.

"Silver medalists may torment themselves with counterfactual thoughts, of 'If only...' or 'Why didn't I just,' " the researchers wrote. "Bronze medalists, in contrast, may be soothed by the thought that, 'At least I won a medal.' "

The researchers controlled for various alternate explanations: In some sports, such as soccer, the winners of the gold and silver medals are decided in the final match, and there is a separate match that decides the bronze medal winner.

"We are not suggesting, of course, that finishing second or coming close to a cherished outcome always leads to less satisfaction than a slightly more modest performance," the researchers concluded. "Finishing second is truly a mixed blessing. Performing that well provides a number of direct benefits that increase our well-being: recognition from others, boosts to self-esteem, and so on.

"At the same time, it can indirectly lower satisfaction by the unfortunate contrast with what might have been."