Accessibility links
Michael Phelps Exits The Olympics, And Enters Retirement At 27 : The Torch Michael Phelps leaves London with 18 gold medals and a record 22 total medals. He says that his plans for life after the Olympics include visiting some of the cities he's competed in — but outside the bubble of swim meets, for a change. 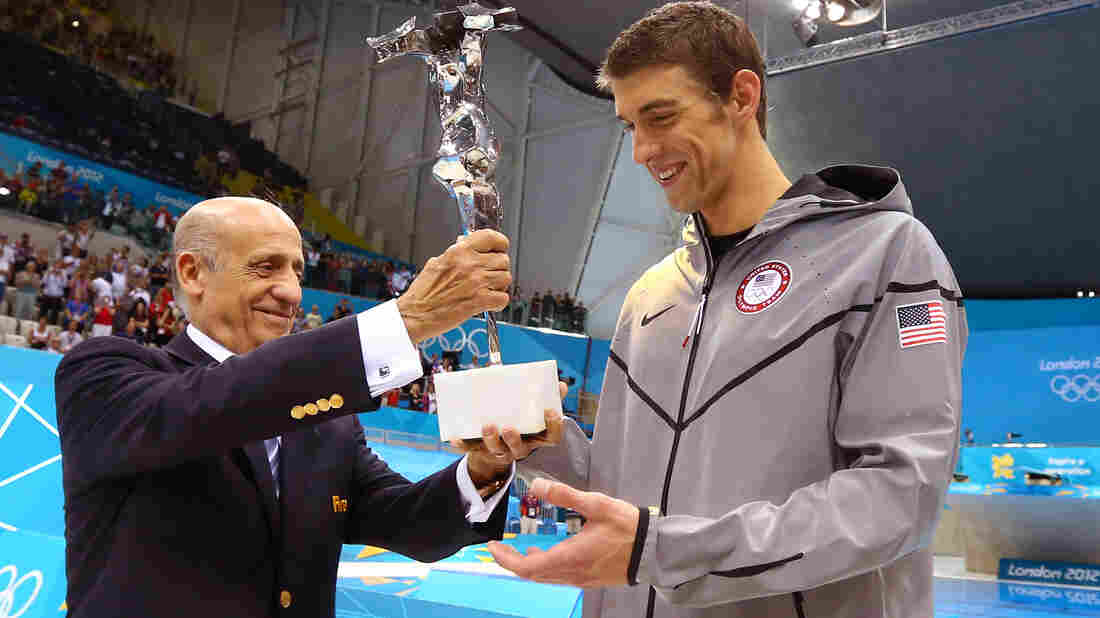 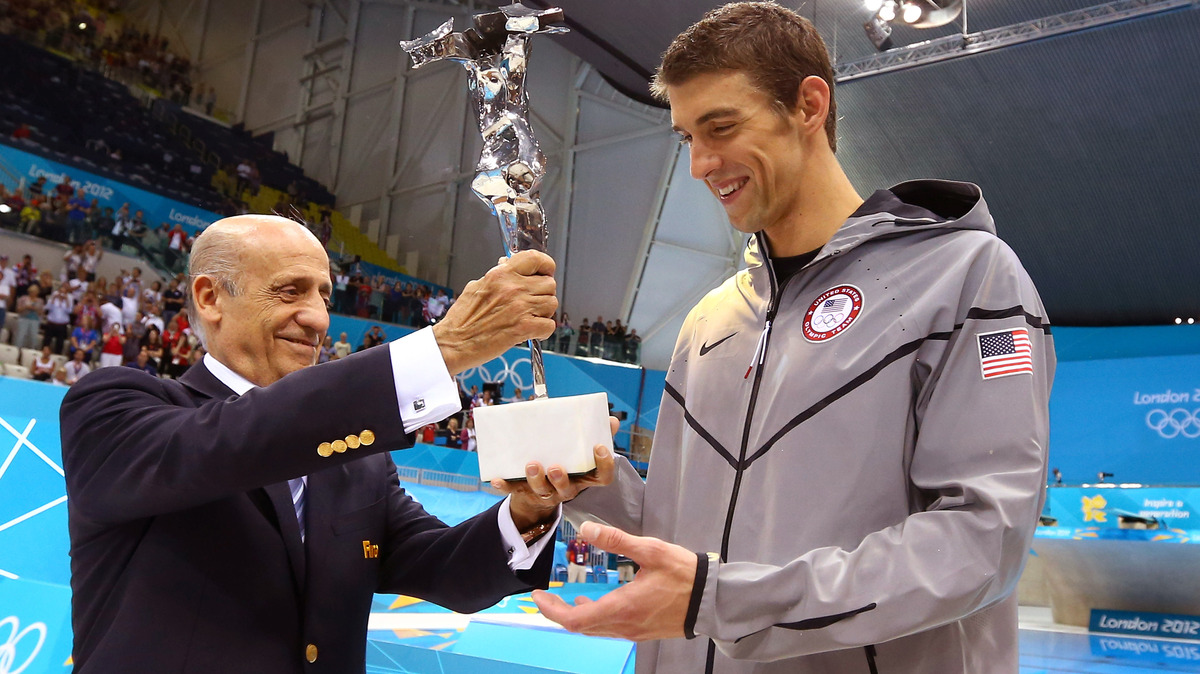 Michael Phelps accepts a trophy commemorating his status as the most-decorated Olympian from FINA president Julio Maglione. Phelps is retiring from Olympic swimming at 27.

When Michael Phelps came to London for the 2012 Summer Games, he had 14 Olympic gold medals. He's leaving with 18 and a record 22 overall. And now he's retiring at 27, leaving the sport in which he always said he wanted to do things that had never been done before.

He put a big new "first" on his resume in London, as he became the only Olympic swimmer to win gold in the same event three times. He also became the most decorated Olympian in history. And after his last race, he was given a statue to mark that status.

"It's kind of weird looking at this and seeing 'Greatest Olympian of All Time,'" Phelps said at the time. "I finished my career the way I wanted to. I think that's pretty cool."

A few weeks before he left for London, I called Phelps to talk about his swimming career, his training and his plans after retiring. Those plans include visiting some of the cities he's competed in — but seeing them outside the bubble of swim meets for a change.

In a statement that won't make anybody who lost to Phelps in London feel any better, he said, "I am getting older, and I do find it harder to recover."

Here's an edited version of our conversation: 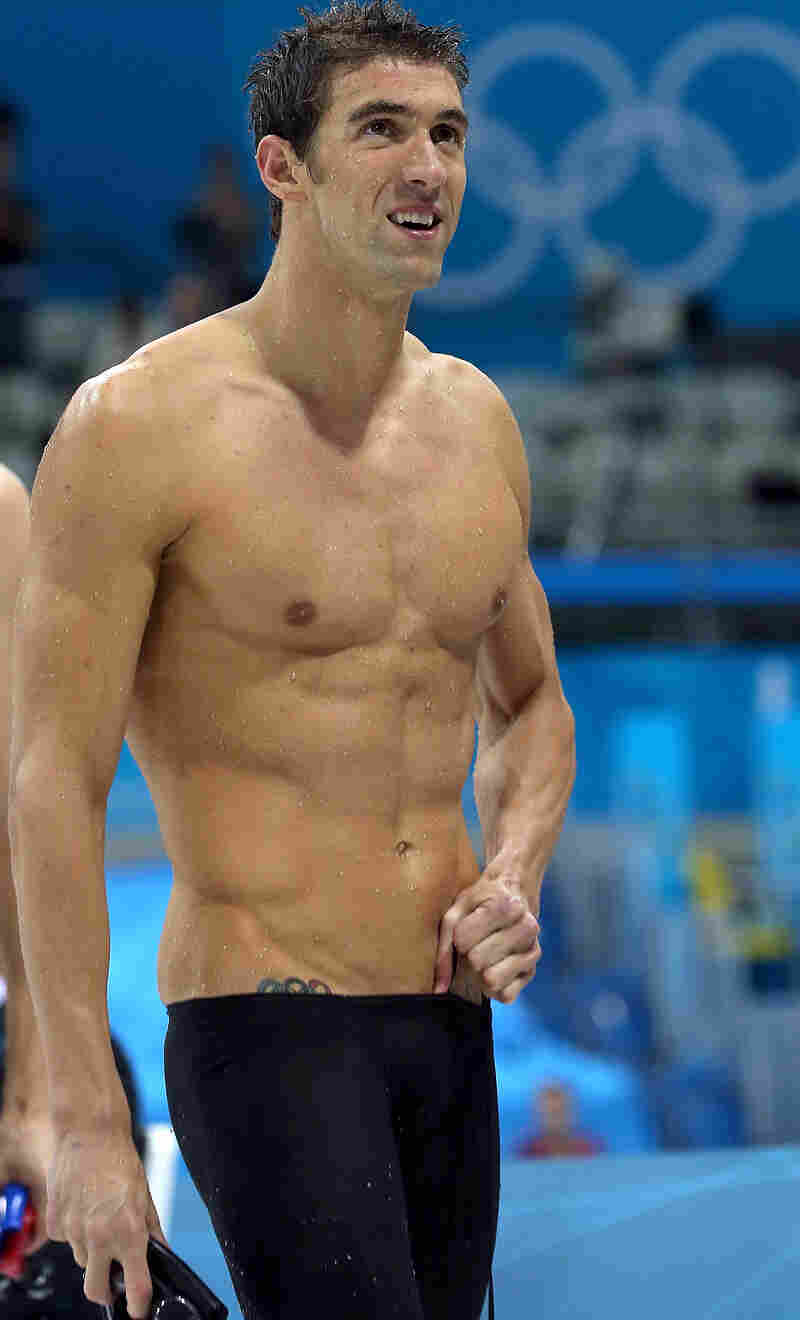 Phelps leaves the pool after his final Olympic swim, in the men's 4x100 meter medley relay. Phelps, who won his 18th gold medal in the race, has said "I am getting older, and I do find it harder to recover" after events. Clive Rose/Getty Images hide caption 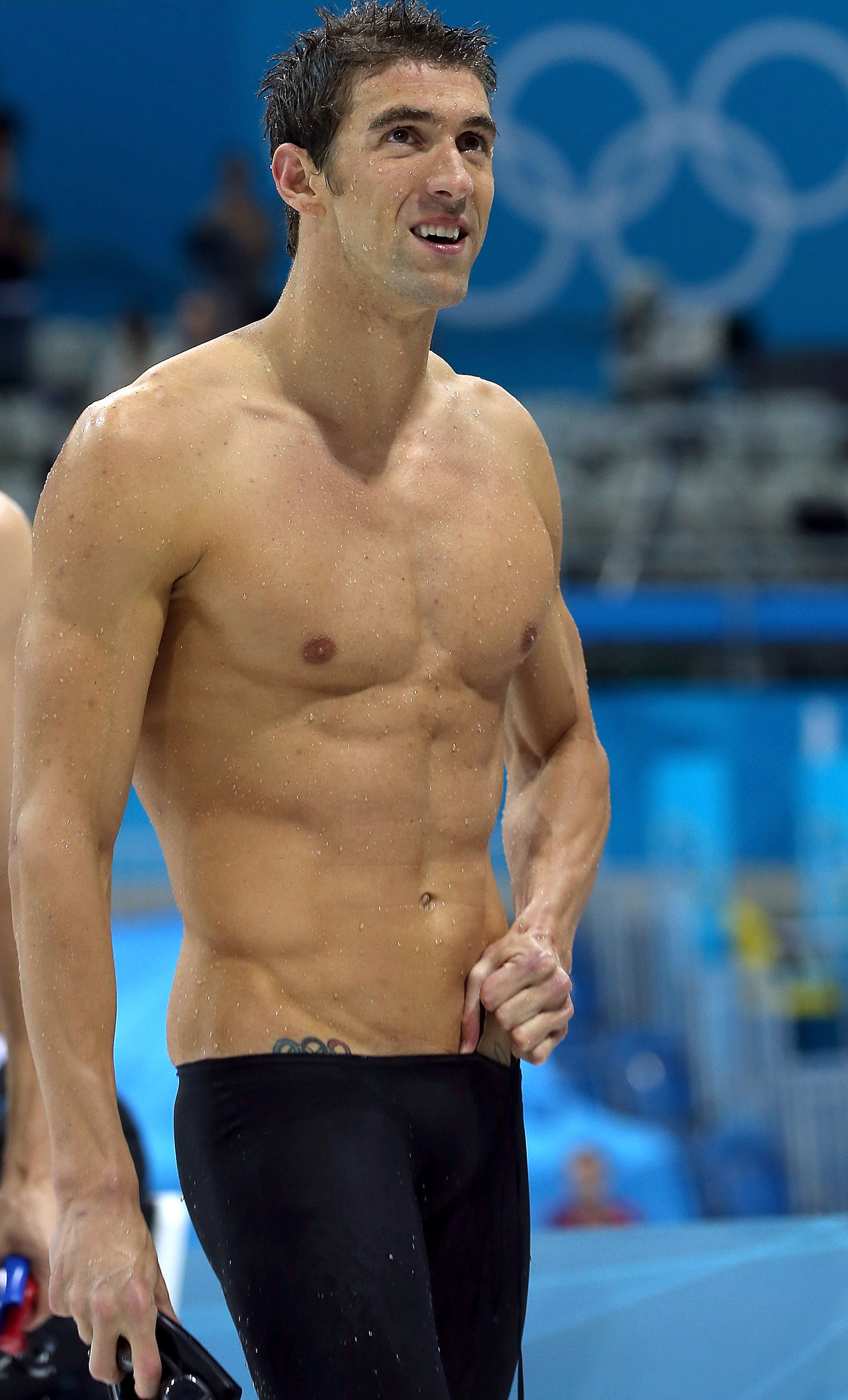 Phelps leaves the pool after his final Olympic swim, in the men's 4x100 meter medley relay. Phelps, who won his 18th gold medal in the race, has said "I am getting older, and I do find it harder to recover" after events.

This will be your last Olympics. What will you do next?

"After the summer, I really don't know what I'm going to do. Obviously, I'd like to be able to travel around and take some time and just sort of take a break, and travel, and SEE some cities. You know, I haven't been able to see too many of the cities that I've been able to travel to, just because I see the pool and I see the hotel.

So, just being able to travel and have some fun, and just relax is something that I'm looking forward to do first.

You stopped training after the Beijing Games. What made you want to start back again?

"It's just, kind of finding the want, and the drive to do it again. There were some times when I was kind of in La-La Land and not really too focused on anything, and didn't really have any goals. Once I was able to find goals that I had, that sort of helped me get back into the water and, I guess, be productive. I wasn't really being too productive at that time."

You're a big music fan. What do you listen to before you swim?

"It just depends on the kind of mood that I'm in. It depends on if I'm sort of in an old-school mood or newer stuff. I mean, music has always played such a big role in my life. Whether it's in training or whether it's in competition, I think it really just helps me sort of get in the zone and get focused and sort of help me get ready for what I'm about to do."

"Whenever I get out of the car in the morning or in the afternoon, heading to work out, I kind of just replay the song that was playing right before I got out of the car. That just sort of is on repeat in my head throughout the whole entire workout. So it kind of helps me not think about the pain that I'm going through in workouts."

It can be pretty quiet in the pool, too.

"It can. And you know, I'm just staring at the black line on the bottom of the pool. You kind of need something to think about, I guess, to get you through the two-hour workouts."

When I swam a lot, I used to wish there were video screens on the bottom of the pool.

"That would be awesome. That would make the workout go a lot faster, that's for sure."

On 60 Minutes, you talked about sleeping in a low-oxygen chamber. Did you notice any big changes from doing that?

"I was able to build up to what, I guess, the level that I was at — I think it was something that pretty much really helped me recover ... you know, I am getting older, and I do find it harder to recover. It's something that I think has played a big role and helped us to be ready for every single workout."

What does it make you feel like? It seems like you'd want more oxygen after a workout, not less.

"You feel sort of rejuvenated, and you feel kind of recovered. For me, it's very important. Getting older, I need to be able to be at the top level. The more recovered I am, the faster I can swim, the harder I can train. So, it's extremely important."

On Twitter recently, I saw you cooked breakfast ... and posted a picture of your dish.

"I don't really cook that often. The breakfast place that I usually go to was kinda crowded, so I decided to just go to the grocery store and make some stuff at my house. It was kind of just like throwing everything together. Kind of, whatever sounded good, I just threw it in the skillet and ate it."

"No, I'm a terrible cook. I'm awful, actually. It's not really a Phelps thing, to cook. It's not going to be something that's in my future."

You've said that you got motivated to compete again. Is that because of rivals — like Ryan Lochte?

"I guess competition is just something that really excites me. That's always something that motivates me and gets me sort of going. I hate to lose at anything. So, we've just kind of been able to, from Day 1, in anything I do, I just always try to be the best."

What do you think about staying in athletes' village?

"We are always in the village. The swim team is always in the village, and we always stay together. I think that's just part of the experience of going to the Olympics and being able to represent your country. Being able to be in the same exact environment as people from all over the world, and sort of the best athletes from all over the world coming together, I think, is something you don't find at any other place but the Olympic Games. That's something that's exciting for me to be a part of."

Do younger swimmers ask you for advice?

"I think, once you're at that level — everybody is there trying to prepare themselves for racing. And once you're part of the Olympics you're there just really enjoying the experience. I'm able really to just travel around in the village and do what I need to do, and try and take care of what I'm there to do.... We're pretty much left alone.

What about the fans at the races?

"You know, you can definitely hear and see people cheering, and going crazy. So, I think that's something that's very special." 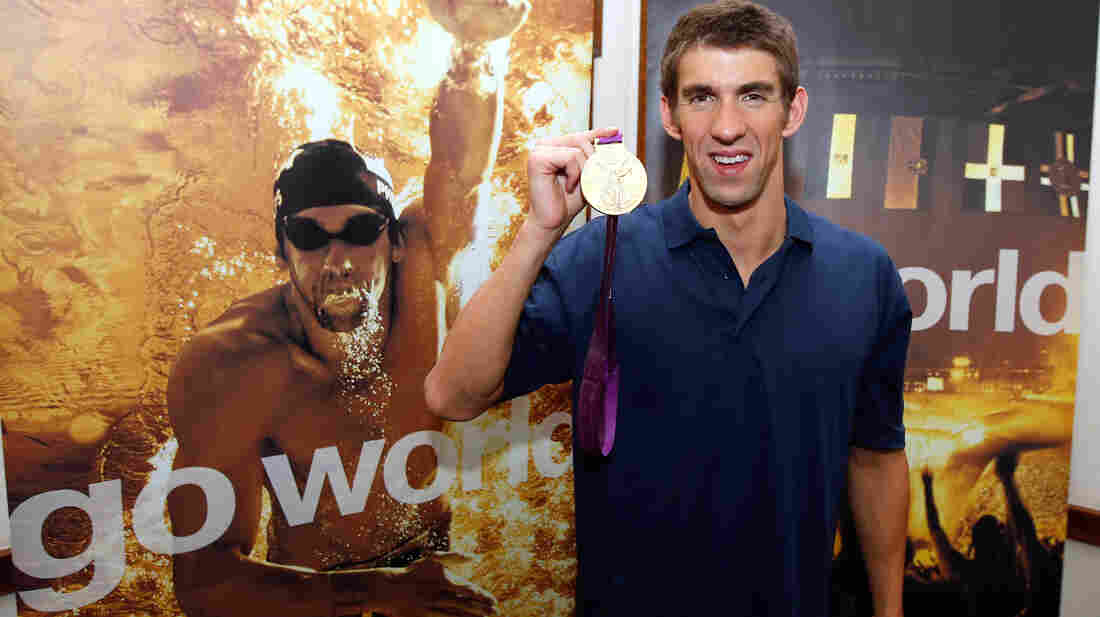 Michael Phelps poses with one of his record 22 Olympic medals after a press conference presented by Visa in London. Now that he's retired, Phelps hopes to see some of the world's cities that he's competed in. Chris Graythen/Getty Images for Visa hide caption 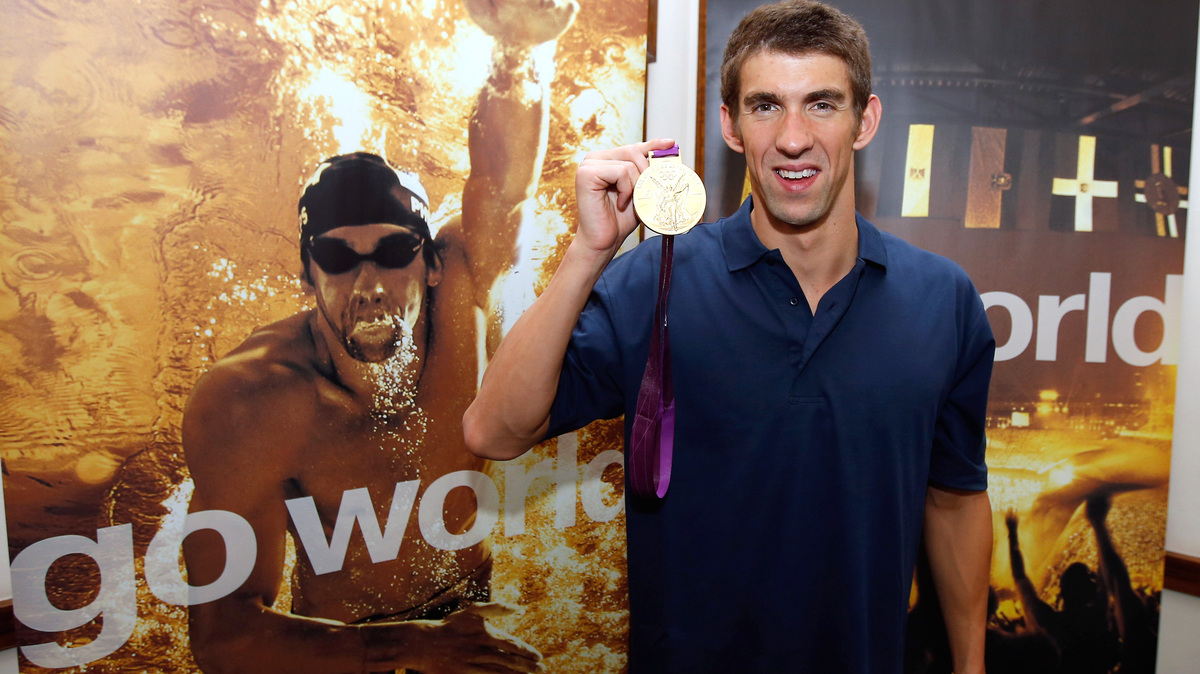 Michael Phelps poses with one of his record 22 Olympic medals after a press conference presented by Visa in London. Now that he's retired, Phelps hopes to see some of the world's cities that he's competed in.