Accessibility links
London 2012: American Allyson Felix Wins The Women's 200 Meters : The Torch Allyson Felix has won the women's 200 meter race in London's Olympic Stadium, running a time of 21.88. Jamaica's Shelly-Ann Fraser-Pryce took the silver medal at 22.09, as she wasn't able to track Felix down in the closing stretch. 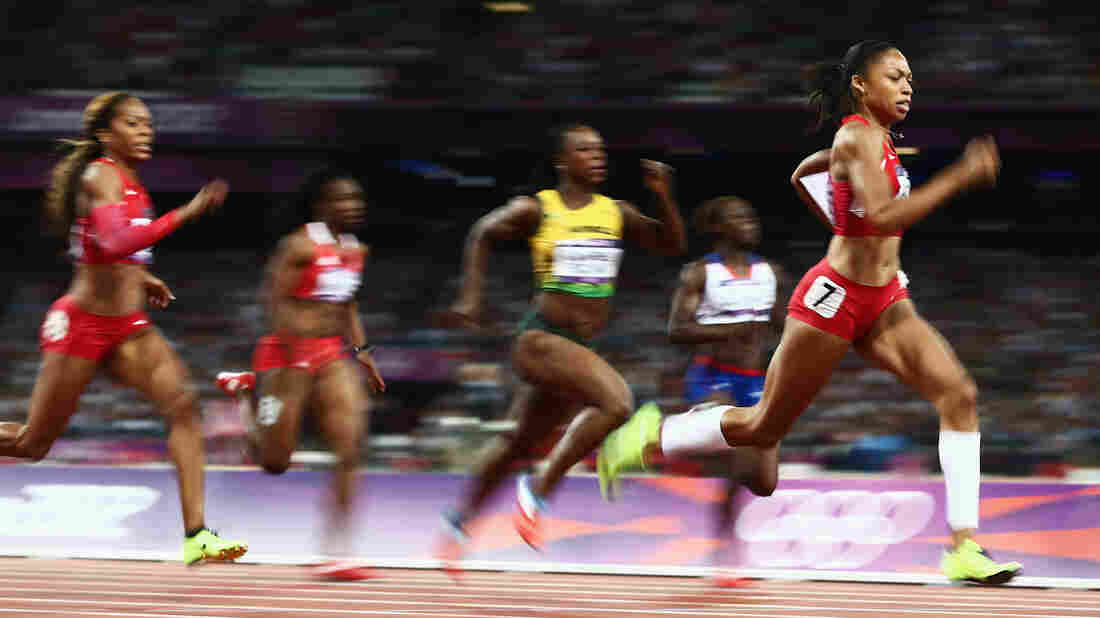 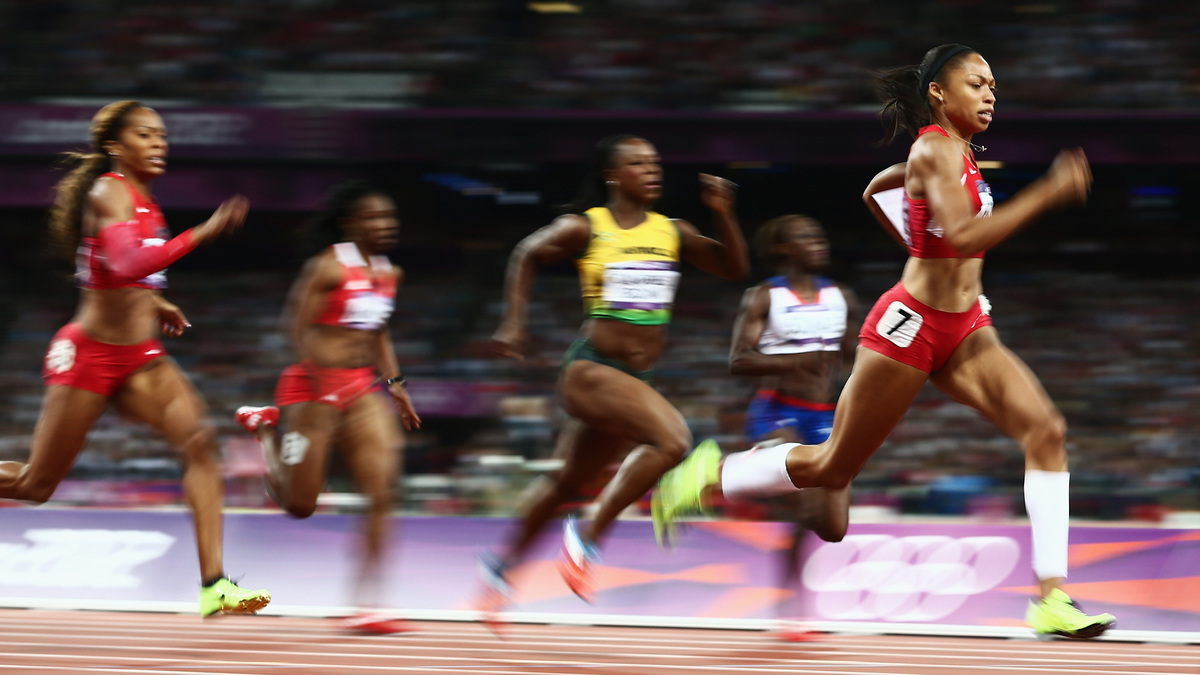 Allyson Felix has won the women's 200 meter race in London's Olympic Stadium, running a time of 21.88. Jamaica's Shelly-Ann Fraser-Pryce took the silver medal at 22.09, as she wasn't able to track Felix down in the closing stretch.

The four center lanes were stacked with speed, with Jamaica's Fraser-Pryce and defending gold medalist Veronica Campbell-Brown in lanes 4 and 5, respectively. Just outside of them were Americans Sanya Richards-Ross and Felix, in lanes 6 and 7. And on the outside, in lane 9, was Carmelita Jeter.

As they came out of the final turn, Felix and the two Jamaicans were at the front of the pack, with Fraser-Pryce seemingly poised to challenge Felix for the win. But Felix stayed ahead, maintaining both her focus and her form as the other runners seemed to flag. Fraser-Pryce set a new personal best with her time.

Jeter won bronze, as Campbell-Brown seemed to have trouble matching the other women's accelerations and finished fourth. Sanya Richards-Ross was fifth, at 22.39. The race took place under very calm conditions, with little wind.

Coming into the race, Felix was the current top-ranked runner at the distance. But she had never been unable to unseat Campbell Brown from her Olympic throne in the 200 meters — until Wednesday.

Felix was interviewed by Allison Keyes for an NPR profile in May. Back then, she said, "The 200 is my baby. You know, I love that race..."

Part of the reason she loves it, Felix told Allison, is getting the feeling of being spun off into the straightaway, shooting forward after that final curve.

"I love the 'being whipped-off' feeling — that slingshot when you do it right," she said.

She did it right Wednesday, and finally claimed gold.

There's another star-studded track and field sprint today at the London Summer Olympics, with the women's 200 meter race featuring a bevy of medal winners. The race is slated to start at 4 p.m. ET.

Let's start with Jamaican Veronica Campbell Brown, who won the last two Olympic gold medals in the event. American Allyson Felix was the runner-up to Brown in both races.

But Felix comes into Wednesday's race after running a blazing 21.69 in her 200 win at the U.S. Olympic trials — the sixth-fastest time in history. She has shown that she has as good a chance as any to claim gold — finally — in her best event.

Also in the field are 100-meter winner Shelly-Ann Fraser-Pryce of Jamaica, American 100-meter silver medalist Carmelita Jeter, and Sanya Richards-Ross of the United States — who has already won gold at the 2012 games, in the 400 meters.