Accessibility links
London 2012: Teen Claressa Shields Wins Gold Medal In Women's Boxing : The Torch She's still in high school, but boxer Claressa Shields is also an Olympic gold medalist, as she won her middleweight bout Thursday. She defeated Russia's Nadezda Torlopova by a score of 19-12, overcoming the Russian with both speed and power. 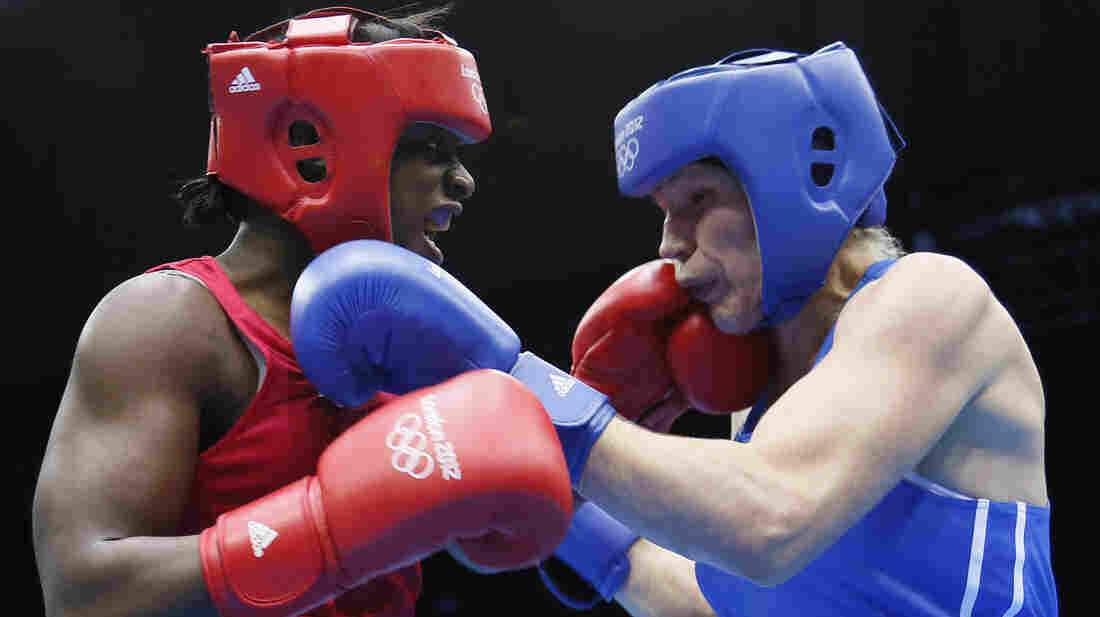 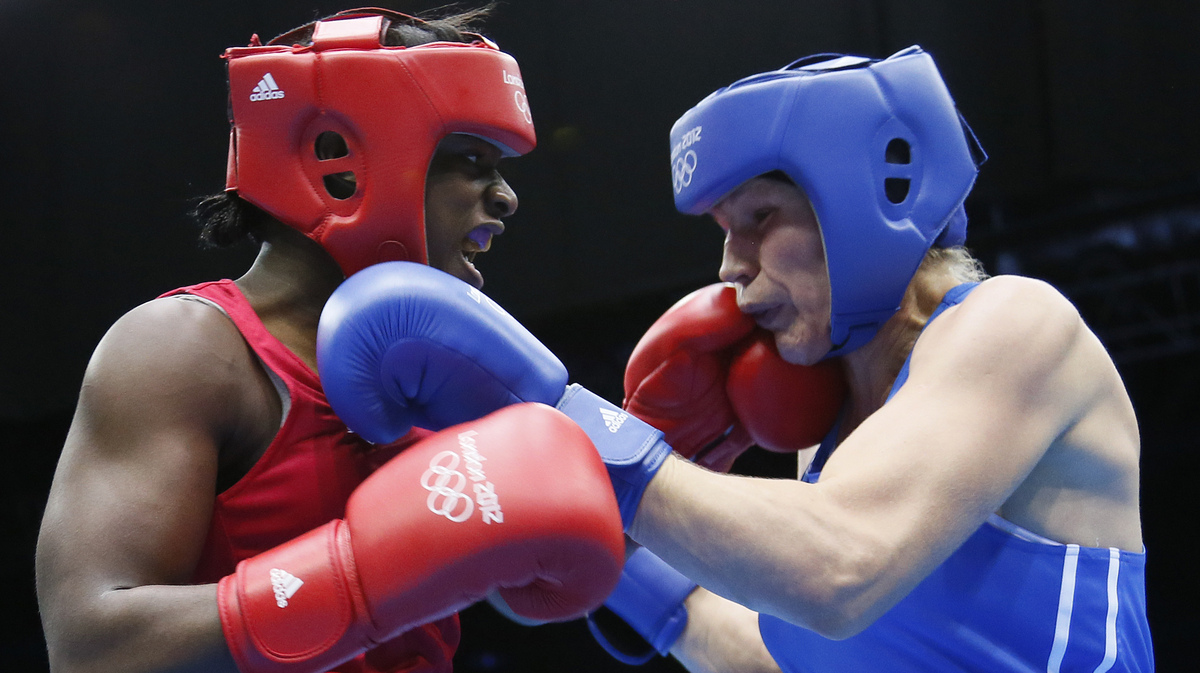 U.S. boxer Claressa Shields (left) lands a punch on Nadezda Torlopova of Russia during the women's boxing middleweight final at the ExCel Arena in London. Shields, 17, won the first-ever gold medal in the event.

She's still in high school, but boxer Claressa Shields, 17, is also an Olympic gold medalist, after she won her middleweight final Thursday. She defeated Russia's Nadezda Torlopova by a score of 19-12.

It was the first gold medal ever awarded for women's middleweight boxing. And by the time the match started, Shields, who was featured on NPR while training in Flint, Mich., represented America's only hope for a gold medal in boxing at the London 2012 Games. Welterweight Errol Spence of Texas lost his quarterfinal, leaving all the U.S. hopes to rest on Shields' shoulders.

Update at 6:10 p.m. ET: One of Shields' heroes is legendary boxer Sugar Ray Leonard — who tweeted about her earlier this week: "Your Jab is so solid use it more! Your Hook, wow (just like mine) win every round and bring home the Gold Claressa!"

Speaking by phone with All Things Considered co-host Melissa Block hours after her match, Shields said, "Yeah, you know I was kinda shocked that he tweeted me. I didn't know, because he didn't tag me in it. I was like, What?"

"Just hearing he's been watching me is a complement," she said. "It means a lot, because he's somebody who I studied. It was great."

As for her gold medal match, Shields admits that she enjoyed it — particularly the final round.

"I was having fun, making her miss, making her pay," she said of Torlopova. "I wish I could've hit her with more punches. But, you know, I made them count. So everything worked out good."

And she says that her father, who at first doubted that his little girl could box, has become a source of good advice, helping her navigate the ups and downs of tournament boxing.

Torlopova, 33, had previously won bronze at this year's world championships. As the gold medal match opened, she and Shields traded quick jabs, as each tried to put points on the board. In two separate instances, Shields landed a hard right and a quick left to Torlopova's headgear. Then Shields missed with a high hook that was wildly off the mark.

But that was the exception, not the rule, as Shields' accuracy and speed challenged the Russian from the start. The two boxers are both listed at 5'9, so neither had a reach advantage.

In the second round, the two had more sustained exchanges, as they put combinations together and landed a few body shots at close quarters. With both fighters showing themselves willing to stand toe-to-toe and exchange shots, the crowd roared its approval.

With each boxer seeking to be aggressive, Shields established herself in the center of the ring, fending off Torlopova with quick jabs.

"You're getting hit too much," her trainer told Shields after that round. "I don't want you getting hit so much."

Midway through the match, Torlopova's handspeed seemed to have slowed down just a bit — and Shields was energized, dancing in the ring, landing punches and eluding most of those thrown by Torlopova.

The two fighters even punched their way out of a clinch, instead of allowing the referee to come in and separate them. The flurry that followed saw Shields go bouncing against the ropes, but she moved herself out of trouble, circling to her left.

Then Shields stalked toward Torlopova with her hands down, seeming to dare the Russian to try to hit her. But that didn't last, as she soon re-established her guard, clenching her gloves up around her face.

"You did a good job," her trainer said after that second round. "You did some of the things that you wanted to do. Now let's have some fun."

Shields seemed to do that in this gold medal match, at one point even sticking out her tongue at her Russian opponent.

In the third and final round, Shields showed her technical ability, staying centered over her feet and ducking beneath three consecutive looping punches from Torlopova.

Then Shields took a glancing blow of the front of her headgear, only to swivel beneath the Russian's right hand to deliver a hard left to Torlopova's cheek.

The boxers clinched a few more times, threw a few more punches, and it was all over.

Back in February, Claressa's coach in Flint, Jason Crutchfield, said he noticed her talent and potential one week after she walked into his gym.

"A coach always wants a champion; that's why we coach," Crutchfield said back then. "I just never thought it was going to be a girl."

At these Olympics, when the American boxing champion could only be a girl, Shields proved her doubters wrong. And she delivered on the promise she has shown in her young career.

The enormity of what she had accomplished seemed to sink in for Shields only as the gold medal went around her neck, when she grinned and threw her head back and bobbed around. I can't say I've ever seen an athlete so animated on the podium's top step.

And as the U.S. national anthem played, Shields sang along — until she couldn't anymore, because the smile on her face had become too wide.