Accessibility links
Gaming The Games: The Rules That Got Bent In London : The Torch Several times during these Olympics, there've been moments when the Olympic oath seemed all but forgotten — you know, the one at the opening ceremony where athletes pledged to abide by the rules and spirit of fair play. 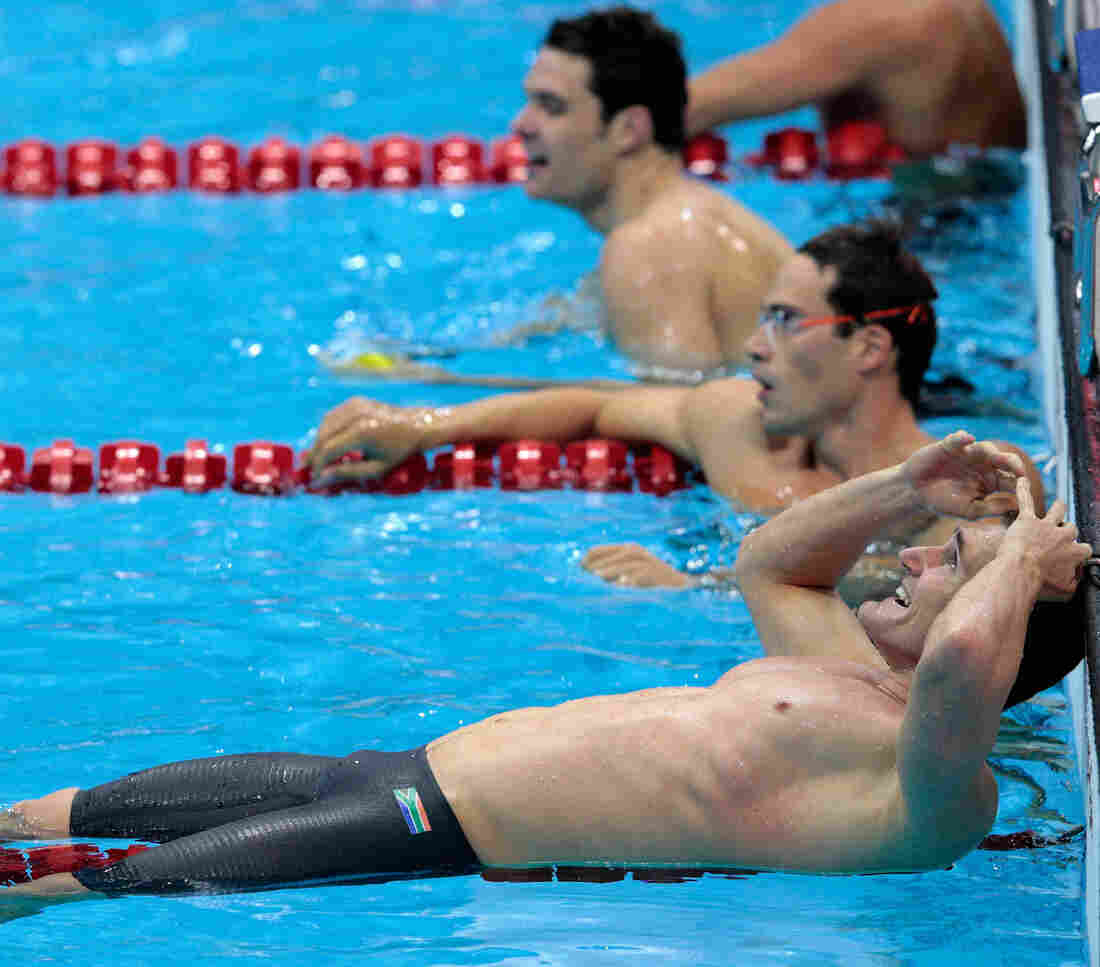 Cameron van der Burgh of South Africa celebrates his gold medal in the men's 100m breaststroke. He later admitted that he took extra dolphin kicks during his swim, a violation of the rules. Adam Pretty/Getty Images hide caption 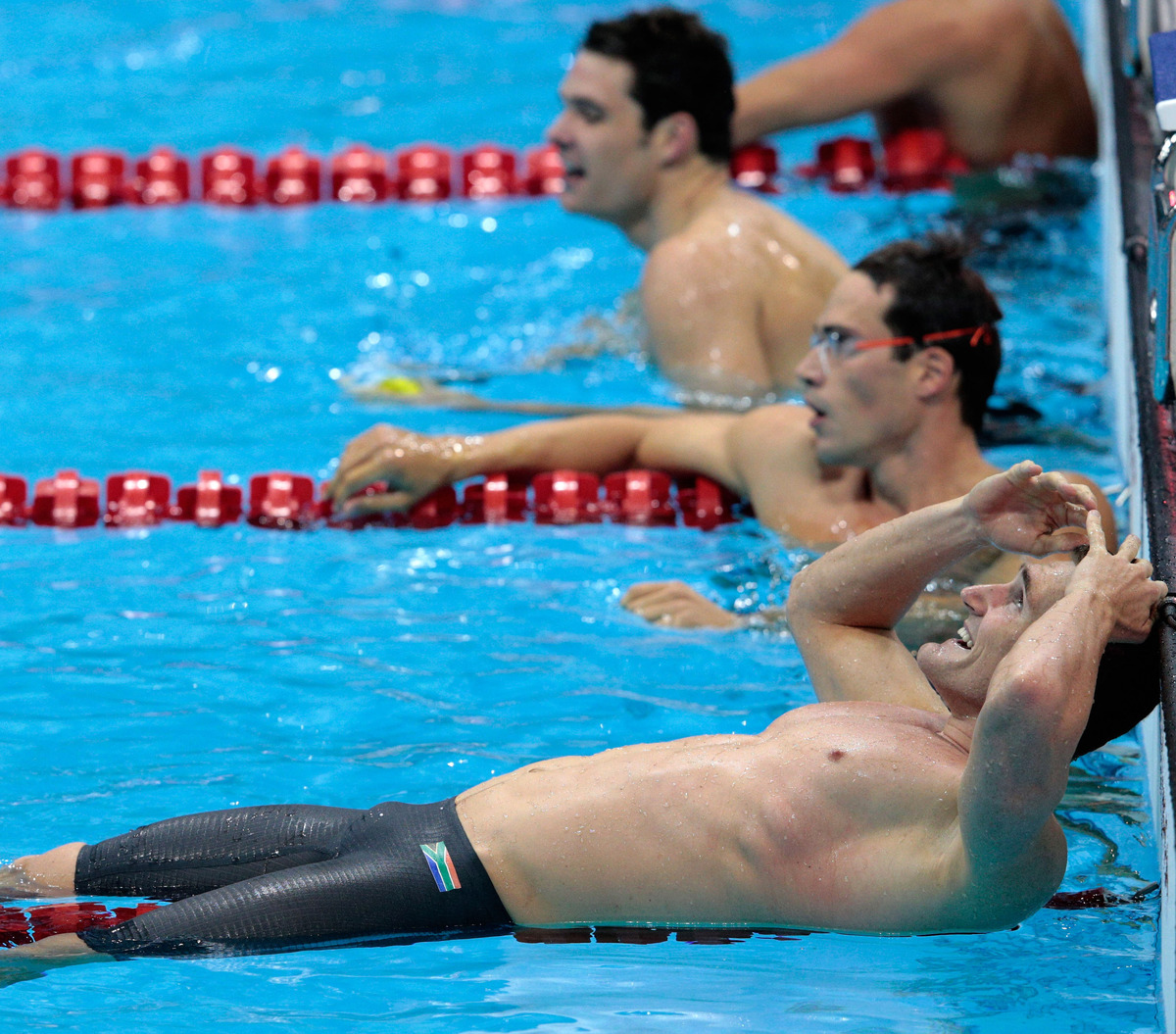 Cameron van der Burgh of South Africa celebrates his gold medal in the men's 100m breaststroke. He later admitted that he took extra dolphin kicks during his swim, a violation of the rules.

The London Summer Olympics are winding down, and by most accounts, the games have been a success. There were plenty of "thrill of victory, agony of defeat" moments; big, enthusiastic crowds — although there were too many blocks of empty seats; and for those who like a helping of scandal served up at their Olympics, there was that, too.

It wasn't the usual scourge of doping. Instead, the London Olympics had incidents of bending the rules and ethics of sport.

Several times during these Olympics, there have been moments when the Olympic oath seemed all but forgotten — you know, the one at the opening ceremony where athletes pledged to abide by the rules and spirit of fair play.

That wasn't what spectators thought when they saw competitors trying to lose — which is what eight badminton players were disqualified for doing in doubles matches.

And at the Aquatics Center, there was cheering for the start of the men's 100-meter breaststroke. When it was over, South African Cameron van der Burgh set a world record and won the gold medal. But then he admitted, in an interview with the Sydney Morning Herald, that he took more dolphin kicks than are allowed.

Said Van der Burgh: If you're not doing it, you're falling behind.

And in soccer, the U.S. was behind in its epic women's soccer semifinal game against Canada, when American star Abby Wambach started reminding the referee that the Canadian goalkeeper was holding the ball longer than the allotted 6 seconds.

"Well, I mean there was a few other times throughout the game that she held it for 18 seconds ... for 10 seconds," she said after the match.

The ref made a rare call on the rule. It led to a tying goal by the U.S., and left Canadian coach John Herdman livid.

"It wasn't like she purposefully tried to slow the game down, where you see goalkeepers really cheating," he said. "She wasn't doing that."

Maybe she wasn't — but Olympians have been gaming the games as long as the Games have existed.

In 1976, American swimmer John Naber won five medals, including four gold. He remembers how the rules were different then, for swimmers who jumped the gun at the beginning of a race. A false start by one athlete would be charged to all. Swimmers were disqualified after a third false start.

"My opponent, knowing I had a very good start, intentionally false-started twice, to hold me back at the start of the race," he says. "In retrospect, I would say that might be gaming the system a little bit. But that was within the confines of the rules."

Despite the stories of rules-bending from London, Naber and other Olympic watchers believe most athletes at the games adhere to the rules and the oath. They base that as much on realism as idealism.

Some 80 percent of the athletes here, Naber says, don't have a realistic shot at a medal — so there's no real incentive to cheat. For those who do, Naber recommends a simple litmus test.

"If there is a question," he says, "come down on the side of, will this embarrass you when your grandmother finds out?"

All the talk about rules and ethics are playing against an Olympic soundtrack of "Chariots of Fire." It's everywhere at these games. And despite chronicled factual distortions, the movie is an ode to all that's right and sportsmanlike about the games.

It is a different world now, with more bounty for successful Olympic athletes, and more incentive for them to break the Olympic oath — which, tellingly, has expanded to include athlete entourages.