Accessibility links
An Olympian Named Mo Farah Takes Britain By Storm, And Becomes A Hero : The Torch When Mo Farah, the gold medalist in the 10,000 meters, was asked if he would rather have run for Somalia, he responded with a curt retort: "Look mate, this is my country!" This Olympic summer is a world away from last year's riots in England. 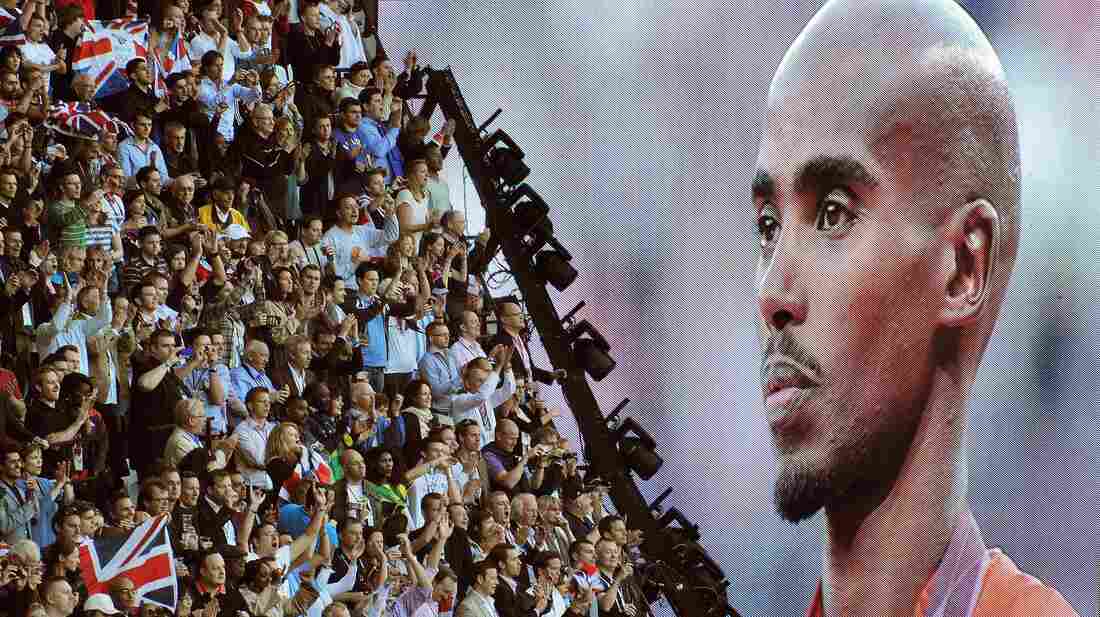 British runner Mo Farah is cheered as he appears on a giant screen at Olympic Stadium, accepting his gold medal for the 10,000 meters. Farah has become a celebrity in Britain since his win. WPA Pool/Getty Images hide caption 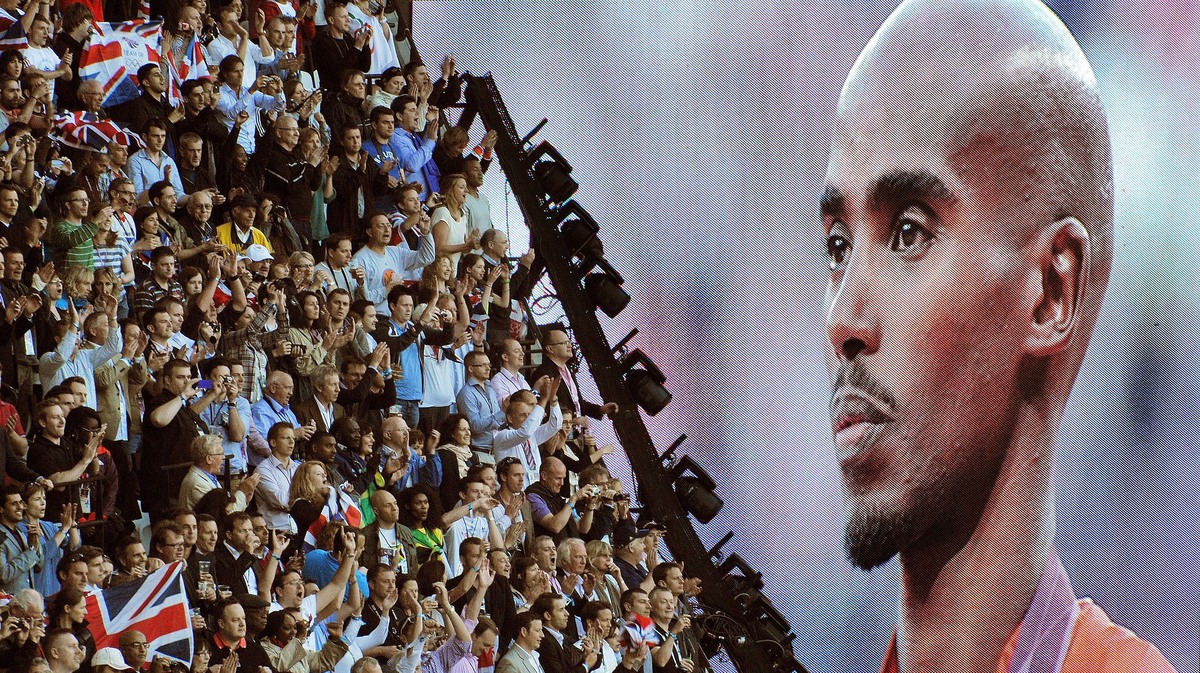 British runner Mo Farah is cheered as he appears on a giant screen at Olympic Stadium, accepting his gold medal for the 10,000 meters. Farah has become a celebrity in Britain since his win.

NPR's Asma Khalid lived in London for two years, before moving to Washington, D.C. And when Khalid returned to England during this summer's Olympics, she found that things — perhaps even people — had changed. She explains:

I had never heard of Mo Farah.

But as soon as I stepped on British soil, I would have struggled to miss him — his face plastered on every paper, his name unashamedly idolized in an almost un-British like manner.

An unusual choice, perhaps, for a British national hero - a man born in Somalia.

Farah, as I quickly learned, is the newly crowned Olympic gold medalist in the 10,000-meter race — a first for the U.K.

Whenever Brits finish gushing over Farah's Olympic success, they often turned to Jessica Ennis - another foreign name, to me. Ennis, I learned, won the heptathlon. And notably, she was born to a Jamaican father and a white mother. 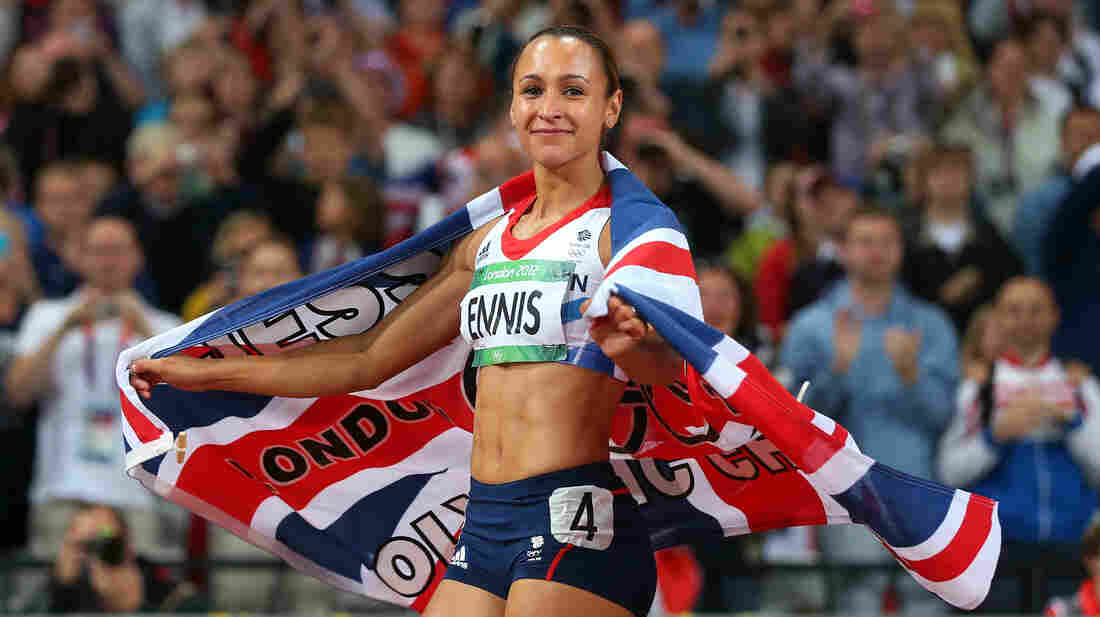 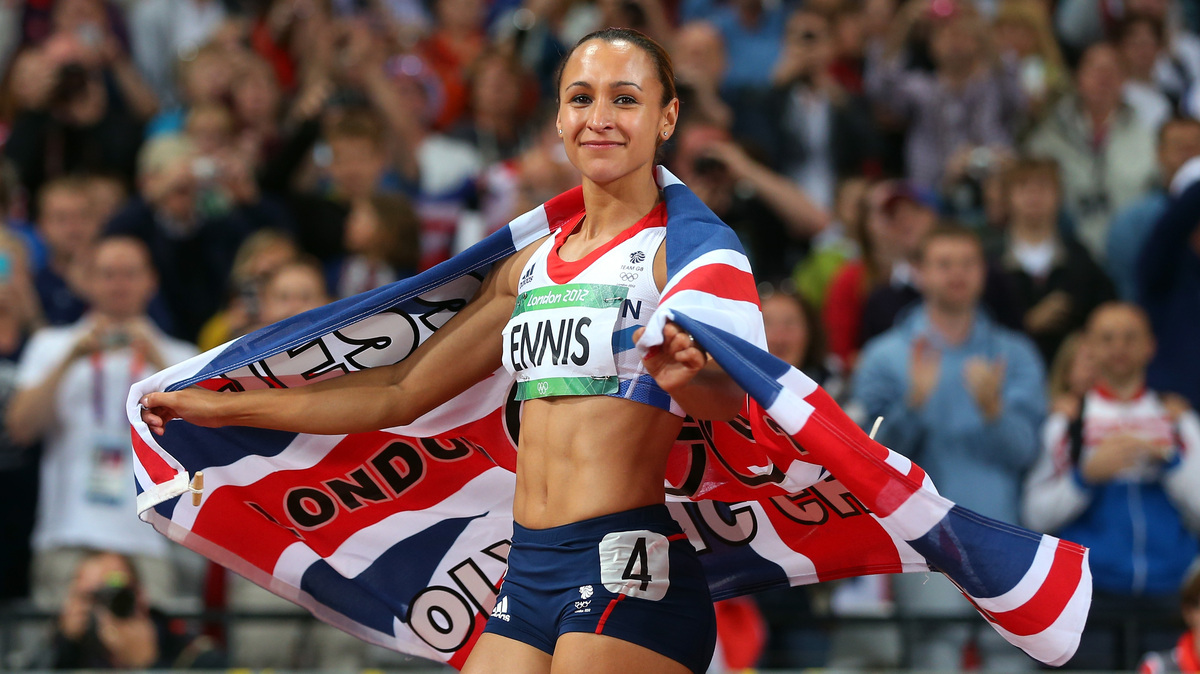 Jessica Ennis of Great Britain celebrates winning gold in the heptathlon at the London 2012 Olympic Games.

She is Team GB's "Golden Girl" — but her halo extends beyond her.

Every British person I meet is radiating in her victory — that is, when they're not boasting about Farah's success and Team GB's medal count.

But for some, it's not about the sheer number of medals hanging from British necks; it's whose necks they're hanging from.

One friend spoke with pride about Farah's post-race interview. When Farah was asked if he would rather have run for Somalia, he responded with a curt retort: "Look mate, this is my country!"

His words appeared to echo the sentiment of thousands of immigrants.

"I've never felt so British before," one friend exclaimed over tea.

"You won't recognize us," others laughed. That's true - I've known these friends for eight years, and I'd never seen them in such a patriotic euphoria.

But it's easy to understand why. Ennis and Farah are versions of themselves — they're black and brown, and that's what much of London looks like. Shades of yellow, black, and brown dot the streets of London.

In America, we often imagine London as the city of Will and Kate. But these days, it looks a lot more like the land of Farah and Ennis.

Immigrants from Africa, Asia, and Europe make London one of the most diverse cities in the world.

Of course, that doesn't make everyone happy. Britain has long struggled with its multicultural identity. Prior to the Olympics, you would hear regular complaints in the political sphere about immigrants, shariah law, and ghettoized neighborhoods.

Now the Olympics have transformed the city into a multicultural utopia. Even the Olympic naysayers have morphed into fans.

When Farah won his 10,000-meter race last weekend, he wrapped himself in the Union Jack and prostrated in a Muslim prayer on the track.

Conservative tabloids were mum about threats of "creeping Islamization." Instead, for Britain, this was a moment of pride.

"It capped the most extraordinary 45 minutes British athletics will surely ever witness," the paper wrote. "These London Games have seen some superlative moments but surely nothing will cap what occurred in the Olympic Stadium as Mo Farah struck home for gold with 450 metres to go."

"No casting agent could have better chosen three people to represent modern Britain: a mixed-race heptathlete with a British mother and Jamaican father; a ginger-haired long jumper from Milton Keynes, and a Somalian refugee."

Commentators say the gold medals won by non-white British athletes could help build bridges in a racially divided UK, and inspire other young immigrants. Sure, that's the hope. Farah's face is now on British stamps. And Ennis is the poster girl of athletic success.

But for some, these gold medals are not just a win for the athletes and Team GB. It's a win for multiculturalism — a philosophy often questioned and attacked in the years after the 2005 London bombings.

With all this euphoria, it's hard to remember that this time last year, London was not beaming but burning. Riots scorched parts of the country, and three Asians were killed in Birmingham, in what's largely been described as a racially motivated attack.

When I ask friends how this 180 degree turn could be possible. They seem to think this inconsistency in race relations is normal; they're not fazed. They say the Olympics and the riots were both abnormalities. It's a sentiment expressed particularly well in a post by BBC editor Mark Easton.

My friends nonchalantly explain that British people are static, non-temperamental - and the extreme anger when teens rioted, looted, and burned shops last August was a blip in the normal British way of life, just as the Olympic excitement will likely be a blip in a few months too.

"We'll have the worst hangover you can imagine when the Olympics are over," one friend told me with a laugh. So perhaps all this praise for immigration and diversity will be short-lived.

But, until then, Farah still has one final event. He's the favorite to win the 5,000-meter race Saturday. And if he does, it may give Brits a few moments longer to bask in the glow of an unlikely British national hero.