Accessibility links
Olympics Closing Ceremony: Both Well-Received And Anger-Inducing. 'No Bed Of Roses' For NBC : The Torch The London 2012 Olympics are officially over, but people are still buzzing about Sunday's closing ceremony. It included many of the highlights of British culture and history that weren't in London's opening ceremony. And in America, some viewers are angry about what was left out of the U.S. feed. 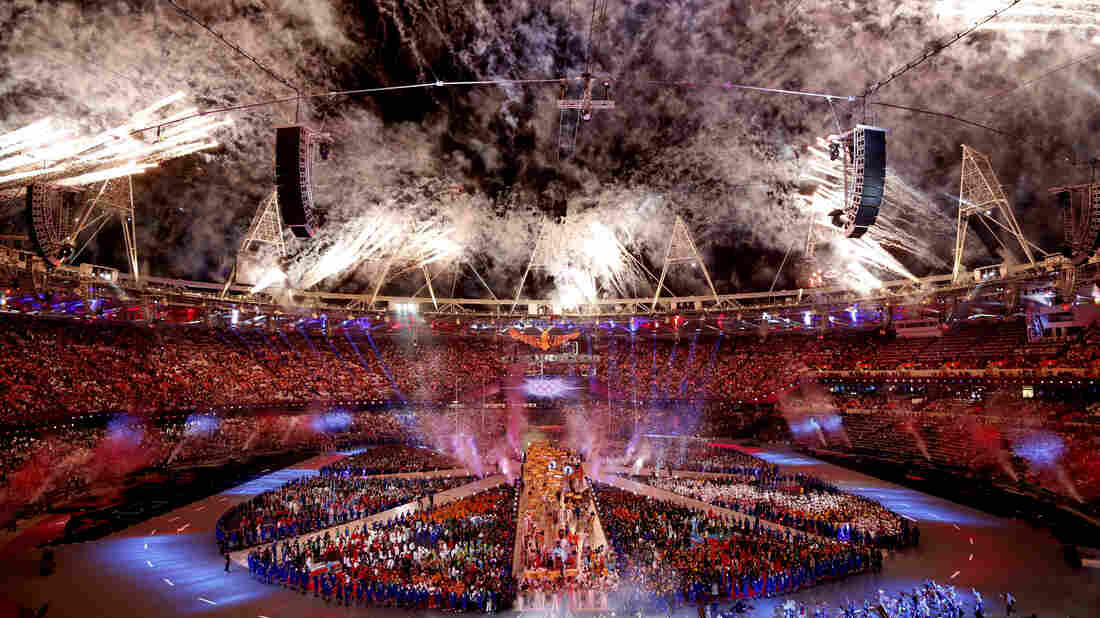 Fireworks explode at London's Olympic Stadium during the closing ceremony of the Summer Olympics. The gala has gotten good reviews — with the exception of those troubled by NBC's presentation. Thomas Coex/AFP/Getty Images hide caption

The London 2012 Olympics are officially over. But people are still buzzing about Sunday's closing ceremony. As Krishnadev wrote last night, the closing gala was a "spectacular farewell" that included many of the highlights of British culture and history that didn't make it into the opening ceremony.

If you missed the closing show, the site Buzzfeed has posted a collection of animated GIF images that summarize "The 25 Most Absurd Moments Of The Olympic Closing Ceremonies."

The list includes Winston Churchill reciting Shakespeare, DJ-producer Fatboy Slim working the decks from atop a gigantic (translucent) octopus, and Victoria Beckham, a.k.a. Posh Spice, taking a pose-break as her bandmates sing and dance.

A different view of the ceremony comes from New York Magazine's Culture Vulture blog, where Matt Zoller Seitz calls the closing ceremony "both kitschy and irresistible" — sort of like a movie made from a musical made from an Abba song, I guess.

On The Daily Mail's story on the ending ceremony, the top-rated comment comes from an American, "Critch" from Missouri, who wrote: "You're Great Britain for a reason, excellent Olympics....congratulations." That sentiment was "liked" 3,513 times by the story's readers.

But in an unfortunate bookend to these Olympics' start, American audiences are raking NBC over the coals for the way it handled the finale. The Twitter hashtag #NBCfail has exploded with new activity. As the Poynter Institute's Andrew Beaujon wrote, "NBC enrages Olympics viewers one last time."

In the finale, NBC reportedly excised nine songs. Here are some of the network's least-loved decisions:

You can see and/or purchase the full songlist via iTunes — it's being called a "Symphony of British Music."

Personally, I was floored that organizers found time to give Queen's Freddie Mercury a wonderful video tribute, and for his former bandmate Brian May to solo on guitar before launching into "We Will Rock You" with Jessie J — but that there wasn't room to include "We Are the Champions," which has long been paired with the other song.

And evidently, I'm not alone. One inagist user called it "heresy" to omit the second half of the Queen classic. The band played it as a medley as recently as last year, with Adam Lambert singing Mercury's vocals.

The athletes who filled the floor of Olympic Stadium surely know the words to "We Are the Champions," and its emotional range suits their sacrifices and experience — from "I've paid my dues" in failures and losses, and the perseverance of "I need to go on and on and on," to the proclamation, "We are the champions, my friends. And we'll keep on fighting til the end."

If you think the song's line "No time for losers" might cut too close to the bone, I'd answer that it doesn't cut very deep. Surely these athletes know by now that you're not a loser if you don't act like one. And what better way to move past self-pity than to stand with the people you beat, and with those you lost to, and belt out, "We are the Champions... of the world."

Because together, these nearly 11,000 athletes really are our champions. They're the world's best at what they do — and they should celebrate the fact that they made it to London, to compete with the handful of people alive who have a hope of beating them.

Still, most of my qualms with the night were largely obliterated by Eric Idle singing the Monty Python song "Always Look on the Bright Side of Life." Even amid prancing nuns, Roman centurions, and Indian Bhangra dancers, Idle kept it very real, not skirting the song's briefly scatological lyrics. Or, perhaps it's best to say Idle kept it surreal, as he often does.

The real shame is that the time-tested song "You'll Never Walk Alone" couldn't make it into the program. Since its debut in 1945, many have seen it as a hymn to post-war fortitude. But I guess it's too affiliated with Liverpool, and its soccer stadium (where it's sung before every game) to be endorsed in London.

Still, that's not a problem for Americans. And it's a good way to say goodbye to the Olympics, while looking toward the future.