Accessibility links
With 5 Weeks To Go Until The Olympics, How Prepared Is Rio? : The Torch Every week seems to bring unwelcome news in the run-up to the Olympics. This week, dismembered body parts washed up on a Rio beach. But how bad are things, really? 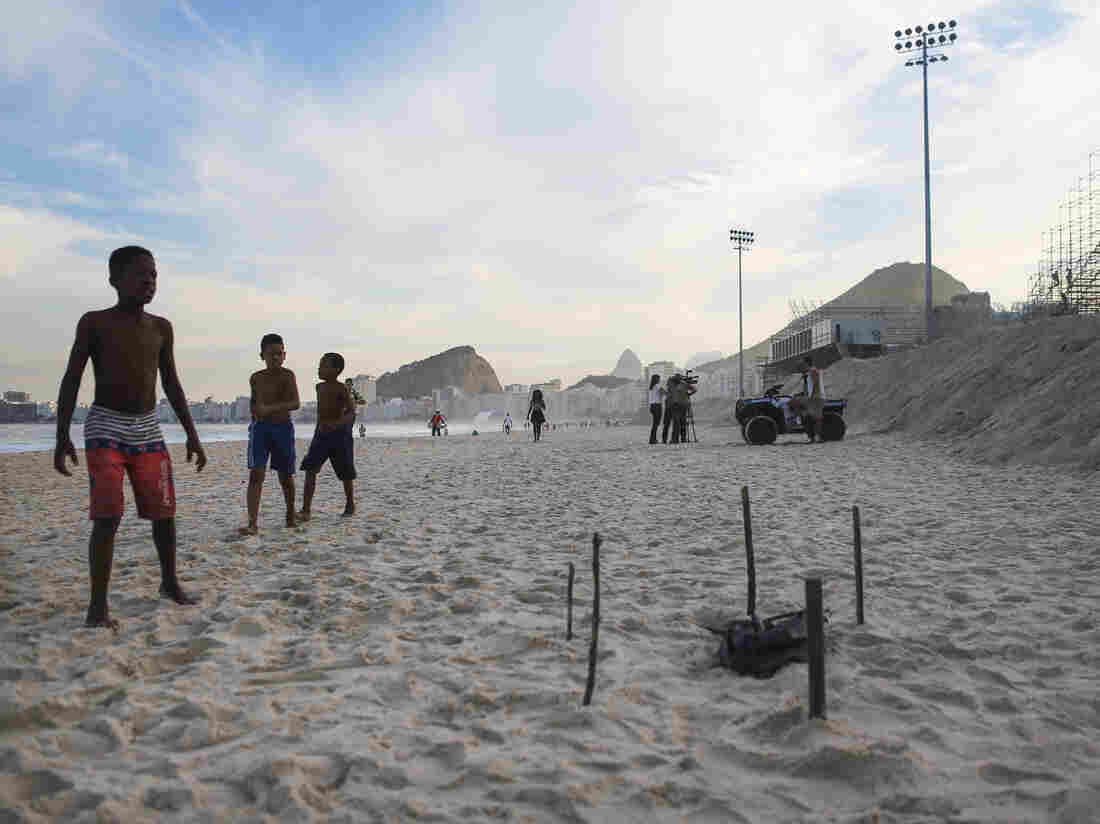 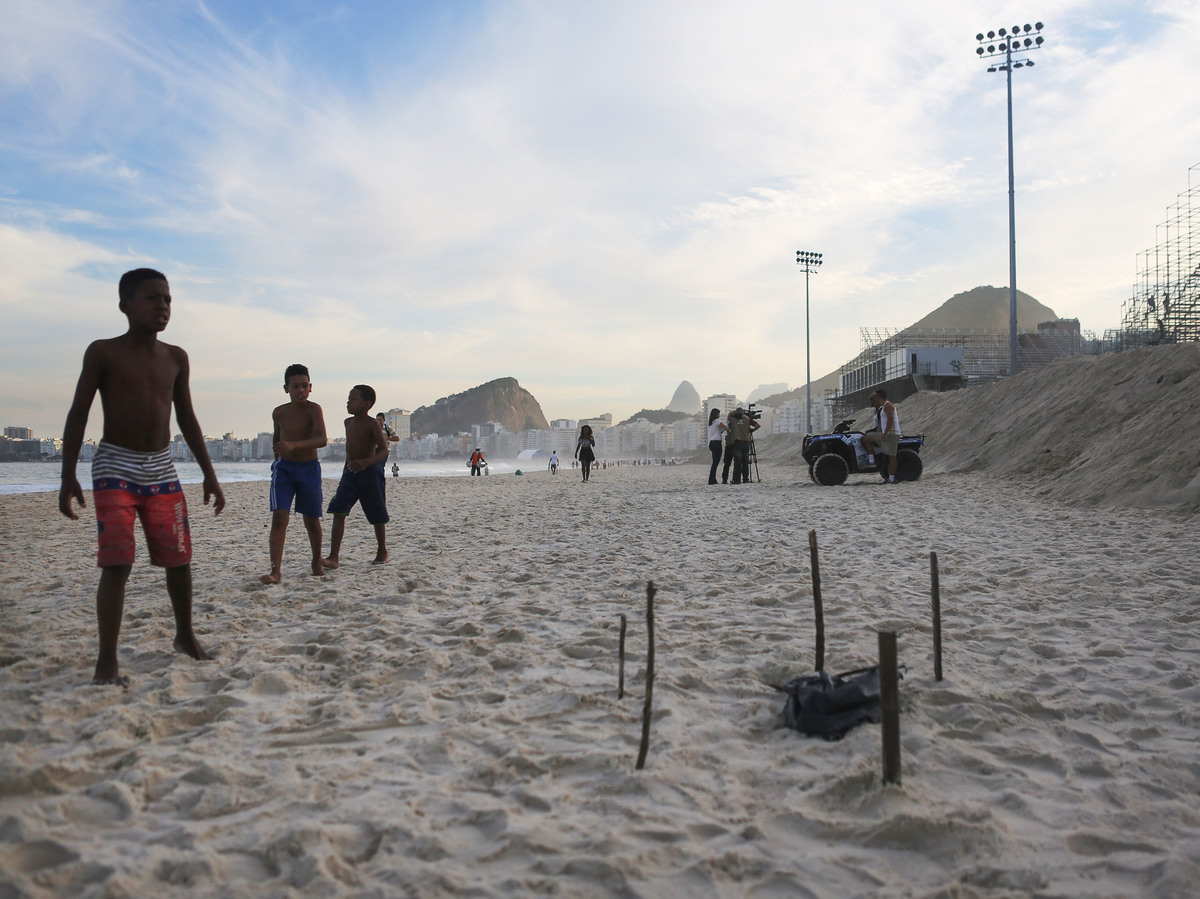 Young beachgoers walk near a body part covered in a plastic bag, which was discovered on Rio's Copacabana Beach near the Olympic beach volleyball venue on Wednesday. The Rio 2016 Olympic Games begin August 5.

If you Google "Rio Olympics" right now, you won't see much about the athletes. Instead, you'll see links to news stories that use the words "horror," "woes," "catastrophe," "pollution" and "perfect storm."

The latest news hasn't made things any better. On Thursday, mutilated human body parts were discovered on the beach near an Olympic sport venue. And today, armed robbers stole Olympic transmission equipment from German TV crews along the main highway in Rio.

How bad are things, really?

Bad. Leaving aside the body parts, police officers and firefighters showed up at Rio's international airport on Monday with a sign that read "Welcome to Hell." They were striking over back pay and because cops here don't even have enough gas for their patrol cars.

Robberies are up 43 percent in Rio de Janeiro state because of a security vacuum. Policemen are being killed in large numbers and there are fights between the drug gangs in impoverished communities or favelas, where 40 percent of Rio's population lives.

Last month, the governor of Rio declared a state of catastrophe, saying there was no money for even basic services like hospitals. And of course, there is the Zika virus. Add to that Brazil's political crisis, which has suspended president Dilma Rousseff. She will be undergoing an impeachment trial during the Summer Games.

In the run-up to some past Olympics, there was also a lot of bad press — but then everything seemed to work out. Will it be different in Rio?

It depends on what you define as success. The problem for these Olympics is that they are facing unprecedented headwinds. The economy is unraveling and Brazil already has high levels of poverty. Kids are sleeping rough on the streets here. Tens of thousands of people in Rio de Janeiro state are losing their jobs. People who would have been in their families' first generation to go to university are now trying to find jobs to make ends meet. 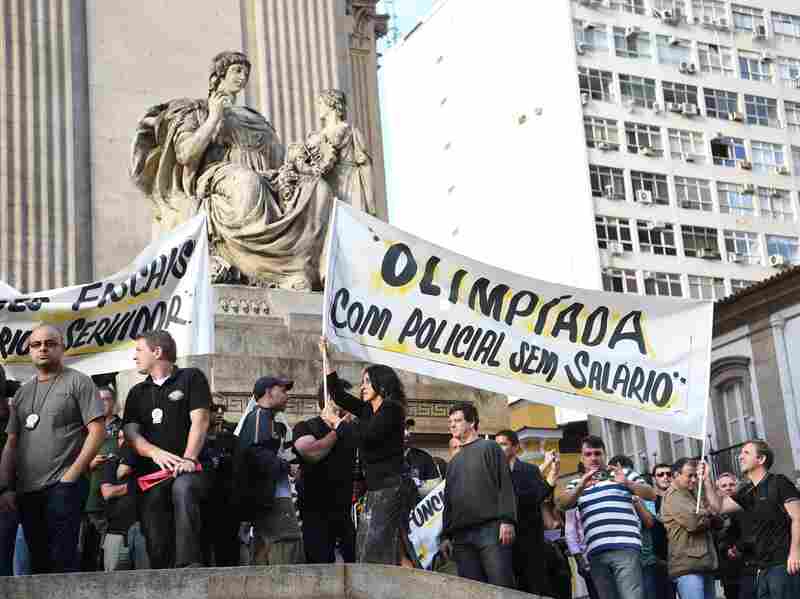 Civil police officers in Rio de Janeiro threaten to go on strike during a June 27 demonstration against the government for arrears in their salary payments. Vanderlei Almeida/AFP/Getty Images hide caption 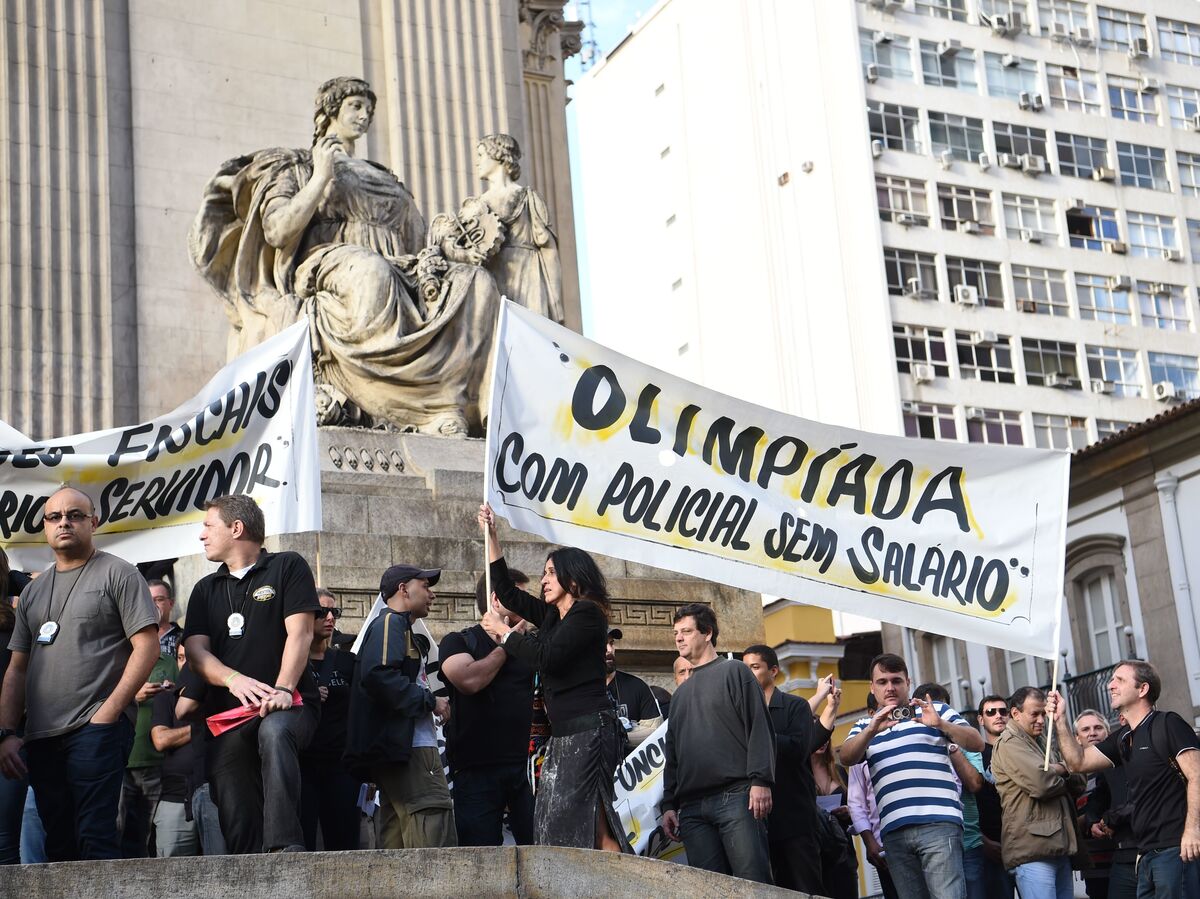 Civil police officers in Rio de Janeiro threaten to go on strike during a June 27 demonstration against the government for arrears in their salary payments.

The Olympics organizers have promised that these will be "legacy" Games and say that Rio de Janeiro will be a better city because it hosted them.

But when you look at who in Brazil will benefit from the Games, who is making money, you see that a lot of new infrastructure has been funneled to already wealthy areas. Thousands of poor people who live in favelas have been displaced to make way for Olympic infrastructure.

We saw what happened after the 2014 World Cup. The games all went fine. But the country was left with billions of dollars of debt and unused stadiums that are white elephants today.

How are people in Rio handling all of this?

For many, it feels like everything for them is spiraling out of control. This is one of the most unequal countries on earth. Its also one of the most violent. And after years of declines in Rio, now violent crime is up.

Most people are looking forward to the Games because 85,000 security personal will be patrolling the streets, double what London had. So the security situation will get better during the Games.

But what will it be like afterward for the people who live here? I spoke to Pollyana Rabello, a mother who had a baby born with microcephaly linked to Zika. She told me mothers like her haven't been getting the support they need from the health services. The hospitals aren't working. She asked why the government is spending all this money on the Olympics when, after the Games go, Zika remains.

"Zika hasn't gone away. It is here," she said. "I think the Games shouldn't happen. I think this money they are investing in the Olympics should be invested in the health and well-being of the Brazilian population. "

What are organizers saying?

That everything is ready. That the Games will be wonderful. And that Rio de Janeiro is a better city because of the Olympics. I sat down with Rio de Janeiro's mayor last month, and he told me they have improved the city's transportation and refurbished whole swaths of the city, like the port area. He and others say these Games will be unforgettable — and that Rio's population will be grateful.