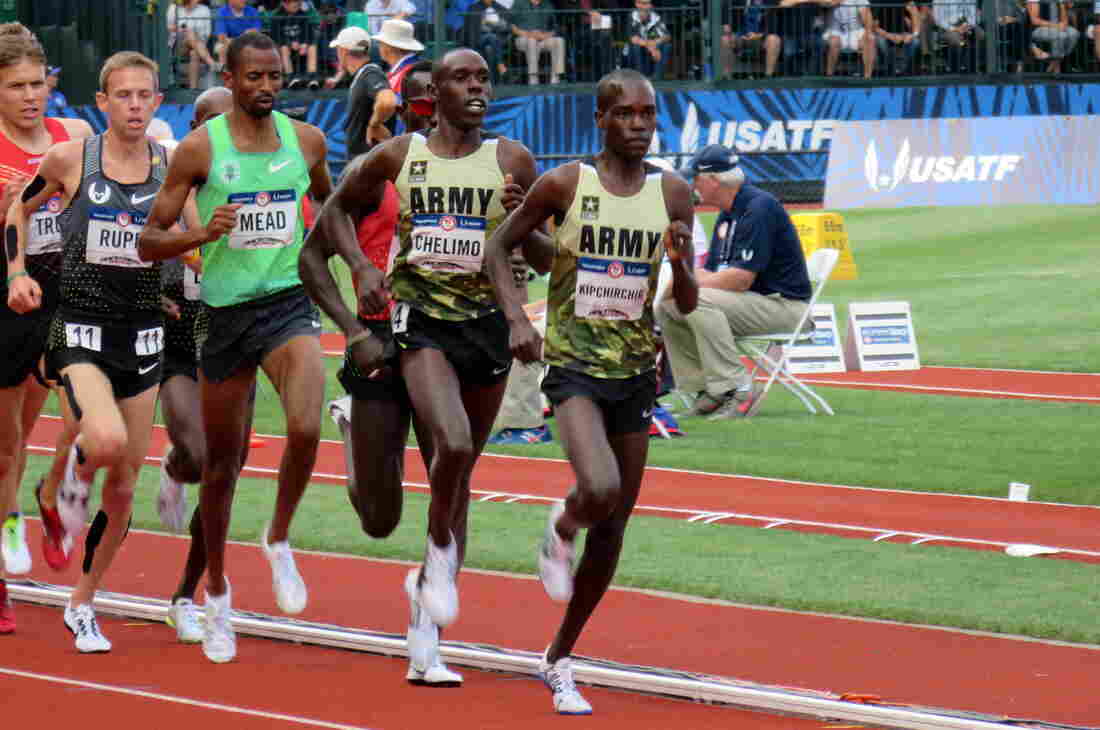 Two members of the U.S. Army lead the pack in the 5,000 meters at the U.S. Olympic Trials earlier this month in Eugene, Ore. Shadrack Kipchirchir (right), did not make the team in the 5,000, but did qualify in the 10,000. Paul Chelimo (second from right), qualifed in the 5,000. Tom Banse/Northwest News Network hide caption 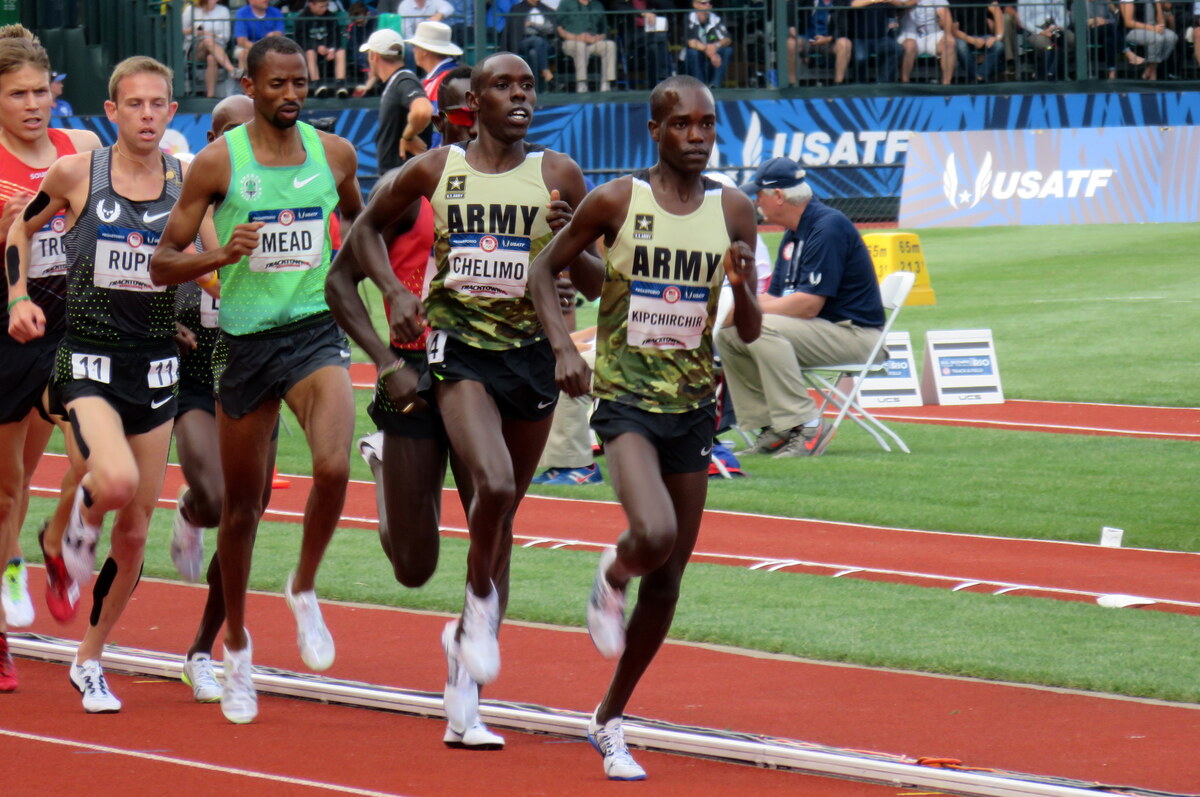 Eleven U.S. Army soldiers are headed to the Summer Olympics in Brazil next month on a mission that doesn't have anything to do with security. They're all U.S. Olympians, including some who only recently became American citizens.

The size of the contingent is testament to the Army's World Class Athlete Program, a detachment that allows soldiers to essentially train full-time in their sports. Credit is also due to a provision of U.S. law that offers expedited citizenship to immigrants who serve in the armed forces.

Paul Chelimo, 25, is one of four Army runners to make the U.S. team. All four were born and raised and started running in the highlands of Kenya. They won athletic scholarships to American universities. After college, they enlisted in the U.S. Army, which is open to non-citizens with legal residency. Chelimo signed up in 2014.

Chelimo was part of the crowded field at the start of the men's 5,000 meters (3.1 mile) at the U.S. Olympic Track and Field Trials, held July 9 in Eugene, Oregon.

Most runners wore brightly-colored uniforms featuring their shoe company sponsors. But Chelimo was in beige, black and camouflage with "Army" in big letters across his chest.

The final lap came down to a furious sprint, and Chelimo finished third, snagging the final spot on the team in the 5,000.

His military service had already provided a fast-track to U.S. citizenship. Chelimo and his Kenyan countrymen became citizens after basic training — and in time to compete for this year's Olympic team. Normally, naturalization can take five years or more.

"It's not about me. It's all about all the soldiers that sacrificed their lives and dedication and hard work. I'm not going to let them down," he said.

The Kenyan-born athletes in the Army program come from the Rift Valley region, a cradle of champion runners. Kenyans from there have dominated the Olympic medals podium in distance running for decades.

"In Kenya, running is like soccer in Brazil," explained Spc. Leonard Korir, who also qualified for the Olympics in the 10,000 meters.

All together, the Army is sending 11 soldier-athletes to Rio de Janeiro — four runners, a race walker, five marksmen, and one in the modern pentathlon. In addition, two more Army athletes — a swimmer and an archer — have qualified for the Paralympic Games. 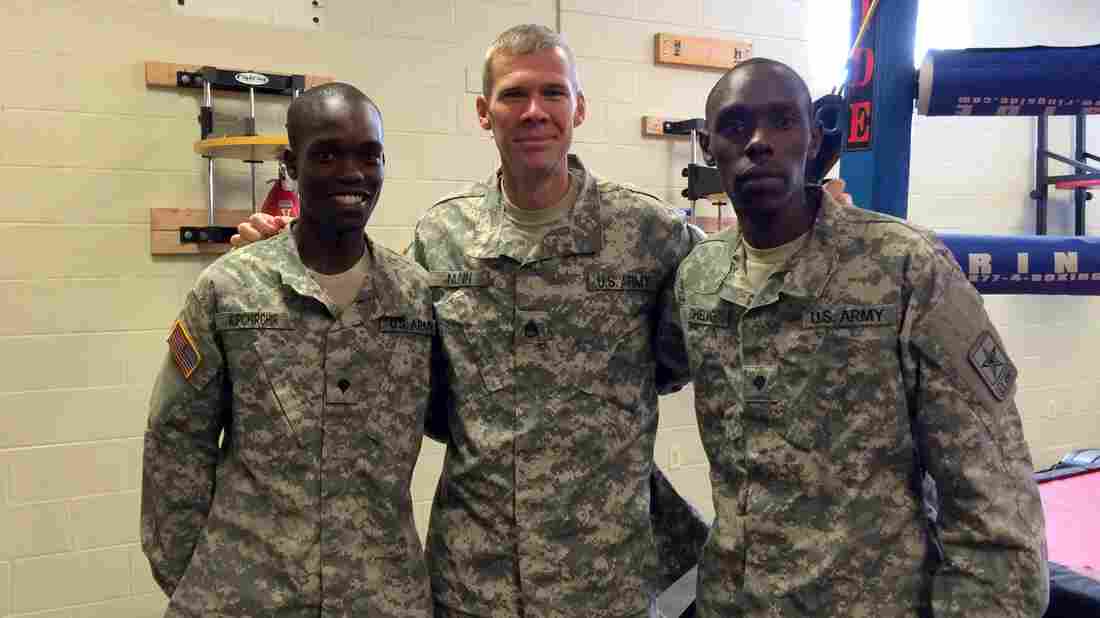 U.S. Army soldiers who qualified for the U.S. Olympic track team include, from left, Spc. Shadrack Kipchirchir in the 10,000 meters, Staff Sgt. John Nunn in the 50k race walk, and Spc. Paul Chelimo in the 5,000 meters. The trio, photographed in Fort Carson, Colo., are among 11 soldiers going to Rio. Holly Pretsky/KRCC hide caption 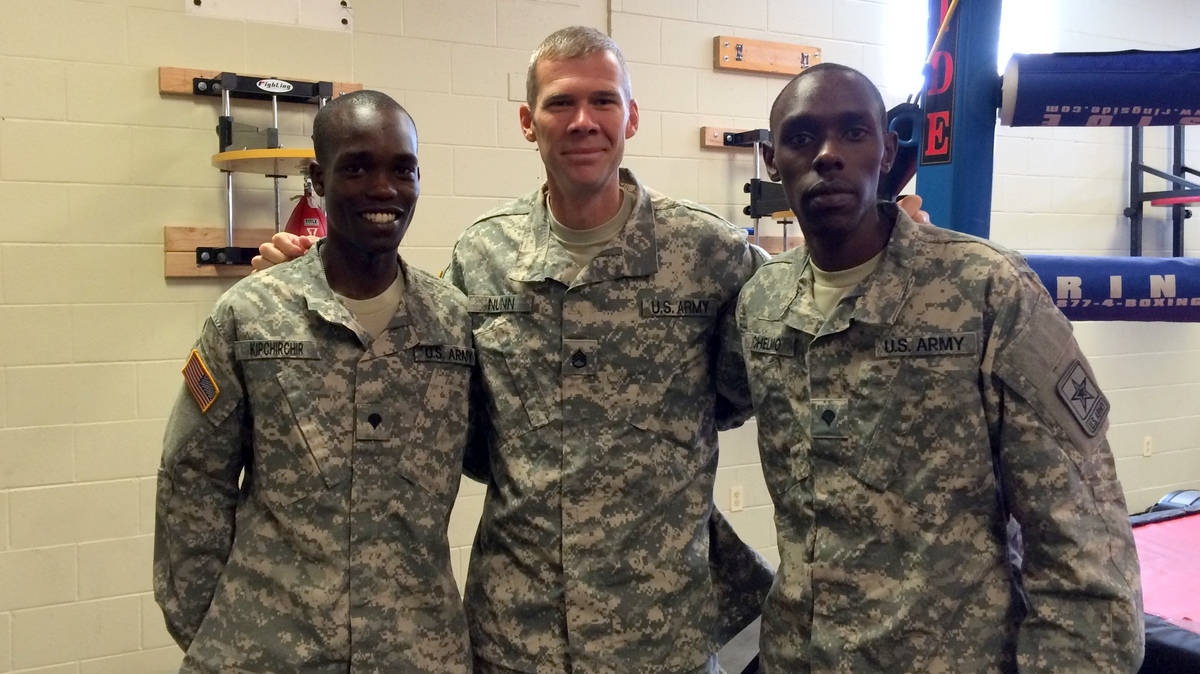 U.S. Army soldiers who qualified for the U.S. Olympic track team include, from left, Spc. Shadrack Kipchirchir in the 10,000 meters, Staff Sgt. John Nunn in the 50k race walk, and Spc. Paul Chelimo in the 5,000 meters. The trio, photographed in Fort Carson, Colo., are among 11 soldiers going to Rio.

"They are great ambassadors for the Army. They represent sacrifice, determination, loyalty, commitment — all of our ethos," said Dan Browne, the coach of the Army's track athletes.

Browne competed in the 10,000 meters and marathon for the U.S. at the 2004 Games in Athens and is now a major in the Oregon National Guard. He stresses that the World Class Athlete Program is open to everyone in the Army who can meet the tough entry standards.

Kenyan-born runners dominate the roster of the Army's World Class Athlete Program for track and field. He says the popularity among Kenyan-American runners has apparently spread through "word-of-mouth."

Browne persuaded his superiors to let some Army runners relocate from their posts to his hometown of Beaverton, Ore. There's no Army base there, but it is home to Nike's world headquarters and a cadre of other professional runners to work out with.

In an increasingly mobile world, a growing number of athletes are leaving their country of birth to compete for another country at the Olympics.

The president of track and field's world governing body IAAF, Sebastian Coe, raised the issue of athletes switching national allegiance during a conference in May.

"I've asked our corporate governance review to look at this, to come back with a set of proposals," Coe said. "In the past, these transfer of allegiance requests have been, sometimes, a little flimsy and we need to address that."

The Army says 65 soldier-athletes have competed at the Olympic and Paralympic Games since the World Class Athlete Program was established in 1997. Male and female soldiers competed in everything from target shooting, boxing and wrestling to (paraplegic) sled hockey and cross-country skiing.

The U.S. Air Force has its own program, which includes First Lt. Cale Simmons, who made the U.S. men's team in the pole vault.

The Navy and Marine Corps have not created dedicated detachments to groom elite athletes, but they do grant leave to Olympic hopefuls. The Navy will be represented in Rio by rower Edward King. And David Higgins, an Air Force Academy cadet who plans to become a Marine officer after the Games, will compete in the prone rifle event.