Accessibility links
2016 Summer Olympics: Kim Rhode Shoots For 6th Consecutive Medal : The Torch If Rio goes well for her, Olympic shooter Kim Rhode could become the first person to medal in six consecutive Summer Games. But Rhode is looking beyond the personal accolades. 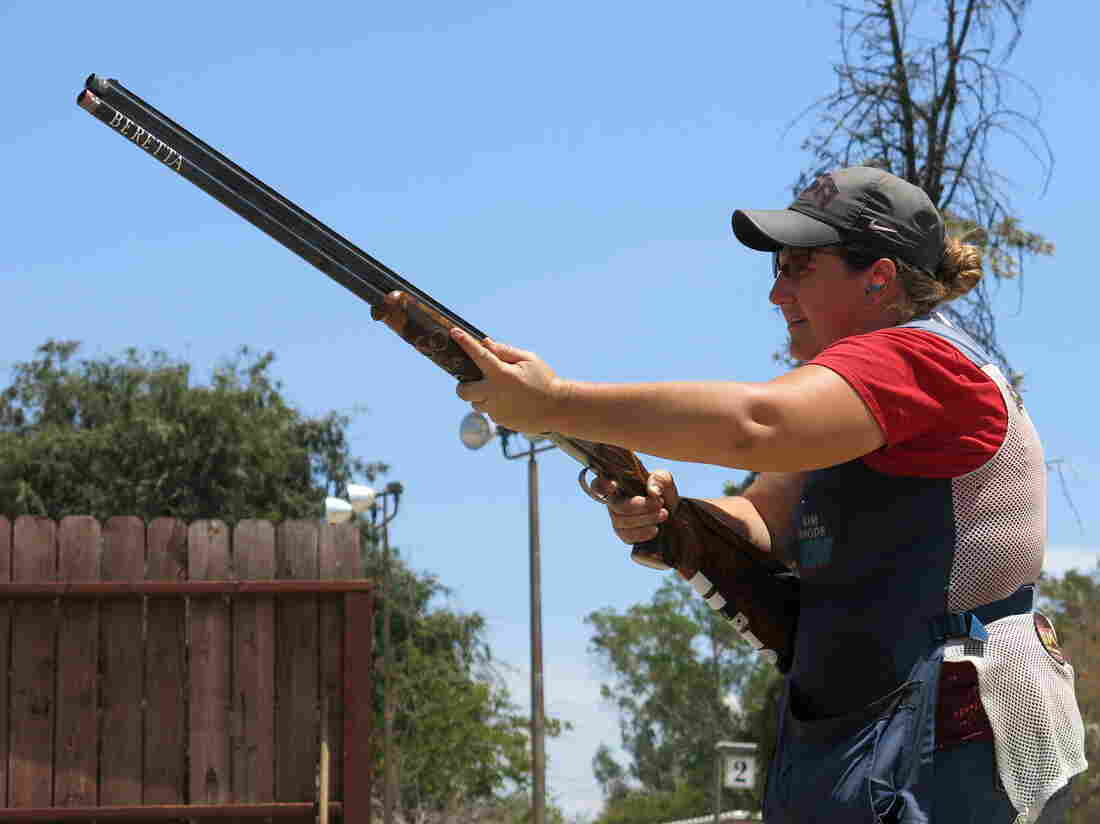 Kim Rhode takes practice shots with the assist of her father Richard Rhode, who's been her coach for 27 years. Nathan Rott/NPR hide caption 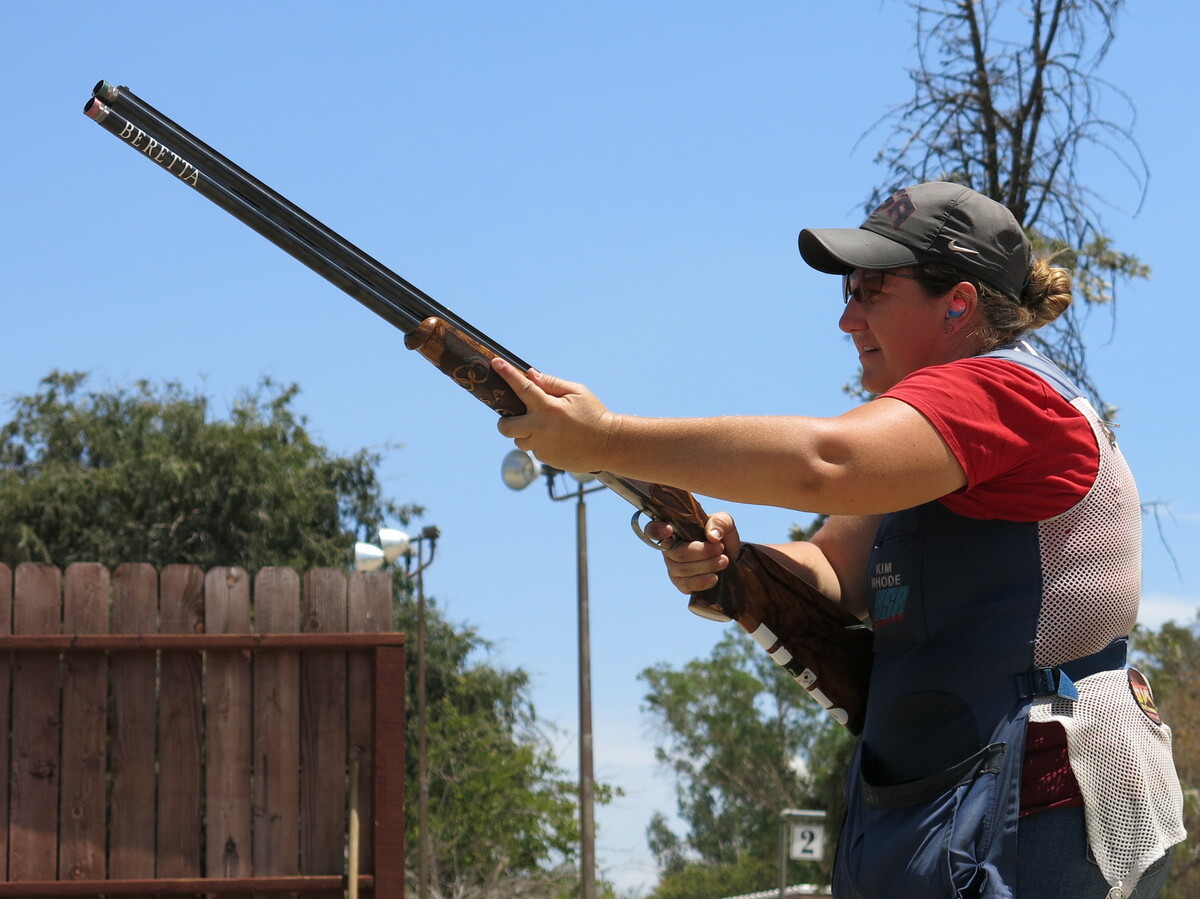 Kim Rhode takes practice shots with the assist of her father Richard Rhode, who's been her coach for 27 years.

It's pushing 100 degrees outside and the Southern California sun is baking the fields of shattered clay at the Redlands Shooting Range — but it's a training day for Kim Rhode, so she shoulders her 12-gauge over-under shotgun, dumps a few boxes of shells into her pockets and heads out to the skeet field.

When you're this close to the Olympic Games, every day is a training day — even if it's an old, familiar drill.

Rhode has a shot at history this summer in Rio. "No pressure," she says. With a medal-finish in skeet shooting this year, she would become the first Olympic athlete to medal in six consecutive Summer Games. She won the first — a gold — in Atlanta, just days after her 17th birthday.

Now 37, she's got more on her mind than just history. Fame and recognition as one of the best shooters in the world has put her in a unique position to become more politically active too.

But for now, she's got to focus on training. She's aiming to shoot about 400 rounds today.

Rhode sets up next to the high house on the skeet field and rests the stock of the gun against her hip. Her coach sets up behind her, holding the remote to the skeet thrower. They've done this since she was 10-years old. Her coach is her dad, Richard Rhode.

The Olympic Storylines You Absolutely Need To Know

Kim Rhode gives the signal, making a noise that sounds like "bah" and after a second-delay, two saucer-sized discs flash through the air. Rhode shoots both and one explodes into an orange puff.

Some of the clay pigeons — or "birds" — she's shooting are packed with a few grams of orange powder. They'll be that way in Rio, Rhode says, "so that when we shoot them, they puff and create a big cloud for the cameras and spectators."

Kim and her dad are trying to simulate the conditions in Rio as best as they can. Olympic skeet shooting is different than normal skeet shooting in a number of ways. The birds are thinner and faster.

When it gets thrown, an Olympic bird is "moving probably at 54 to 65 miles per hour," Richard says. "Normal skeet is maybe 35 to 40 miles per hour."

Olympic skeet shooters have to start with their shotguns at their hips. Normal skeet shooting can be different.

Richard gestures to a group of shooters blasting clays on a separate field at the shooting range. "It's a game of perfect over there. You shoot a hundred straight and then the game starts," he says. "This is a lot harder."

Kim certainly doesn't make it look that way. She shoots until her gun needs to cool and misses one bird.

"It's like walking," she says. "You know when you walk down the street, you don't think 'left, right, left, right." You just do naturally do it. It's the same thing for us. We don't really think, 'hold point, lead, stance.' It's very natural for us."

Kim Rhode started shooting when she was 10 years old. As an avid hunter and outdoorswoman, guns and shooting have always been a part of her life.

And as she's grown older, becoming one of the most decorated sport shooters in the world, she's become more vocal about the politics of guns.

It wasn't entirely by choice. Athletes in shooting sports have to be, she says.

"At the London Games, the first question I got asked when I just won a gold medal in the Olympics wasn't, 'Tell us what it's like to represent your country or what's it like standing on the podium or what does this medal mean to you?'" she says. "It was: 'Can you comment on Aurora?'" — a reference to the mass shooting in a movie theater that left 12 people dead. 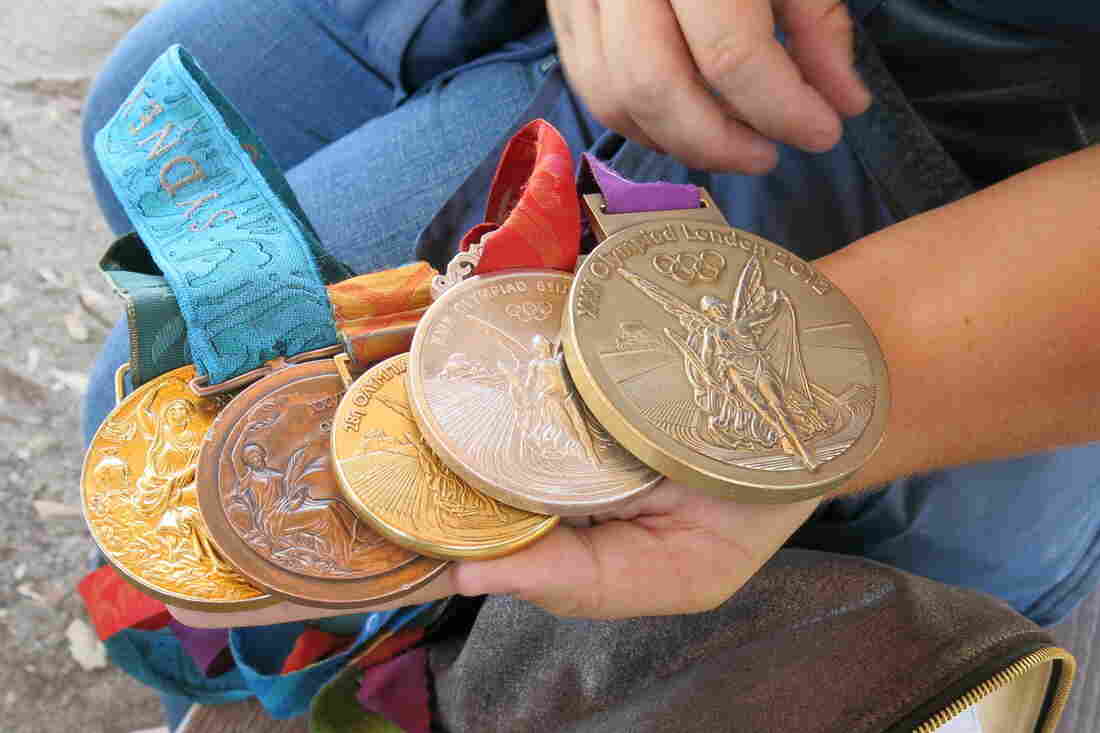 If Kim Rhode places this summer, she'll become one of the most decorated U.S. summer Olympians. Nathan Rott/NPR hide caption 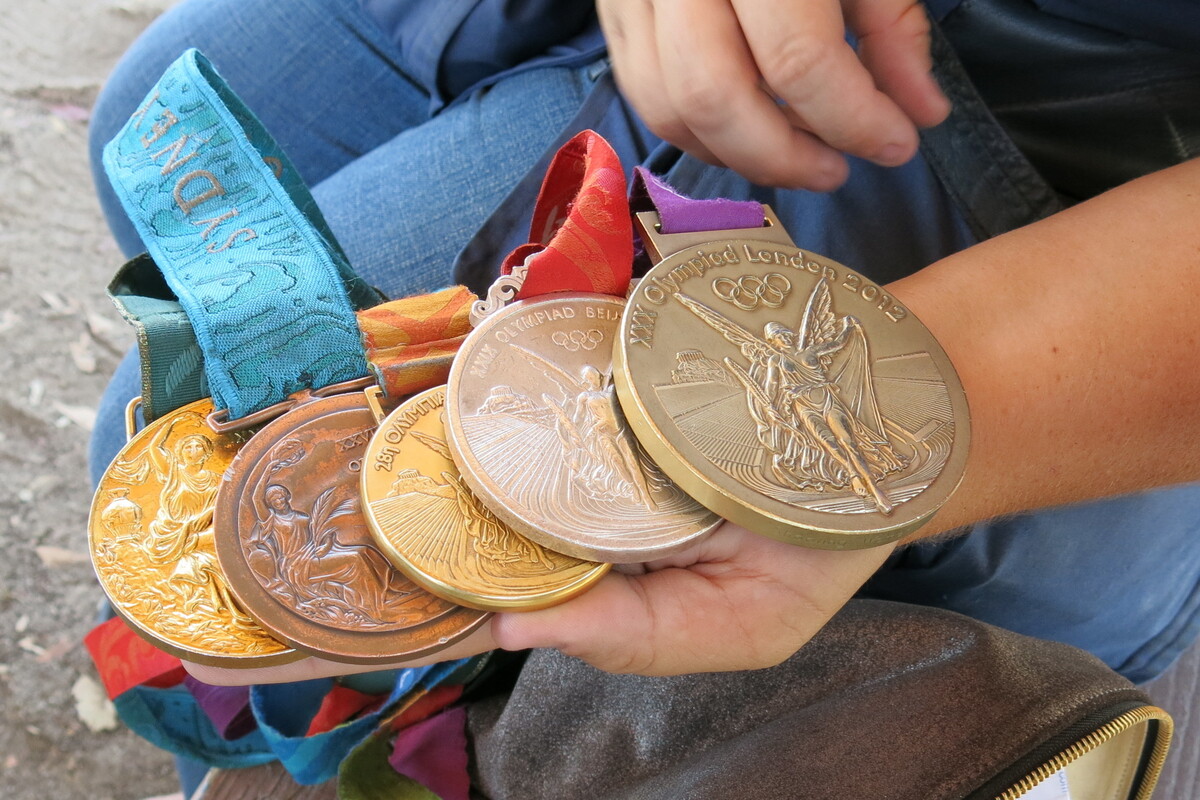 If Kim Rhode places this summer, she'll become one of the most decorated U.S. summer Olympians.

The same has happened in the lead-up to the Rio games. Rhode says she's been asked to comment on recent mass shootings in Orlando and San Bernardino.

"No other sport in the Olympics gets that," she says. "They don't ask the swimmers to comment after somebody drowns."

Rhode is sympathetic to the victims of gun violence. "It's heartbreaking," she says. But she feels like much of the legislation that comes out of mass shootings — especially in California — is ill-conceived.

"We have a lot of bills and legislation that are making it very difficult for people to go out and enjoy that sport that I personally love," she says.

She points to a recently passed law that will require background checks for ammunition sales ("I go through a lot of ammunition," she says) and another that will put stricter regulations on lending guns. "How is someone supposed to learn how to shoot if you can't lend them a gun to try?" she says.

More broadly, Rhode says, she's frustrated by what she sees as a growing stigma against guns.

"Everything we hear [about guns] on the media and news is nothing positive," she says. "They don't talk about the scholarships that kids are getting or the shooting teams around the country where kids are learning things like discipline, respect and teamwork — things they'll use for the rest of their life."

Rhode wants more people to hear those positive stories about guns and sees the upcoming Olympics as an opportunity to do just that. By medaling in her sixth consecutive Olympics, Rhode could do something no other U.S. Olympian has accomplished. That would be a positive story.