Accessibility links
Dubious Olympic Record: More Than 110 Russian Athletes Barred From Rio : The Torch Russians have been banned in a host of sports at the Summer Games, with track and field, rowing and weightlifting hit the hardest. 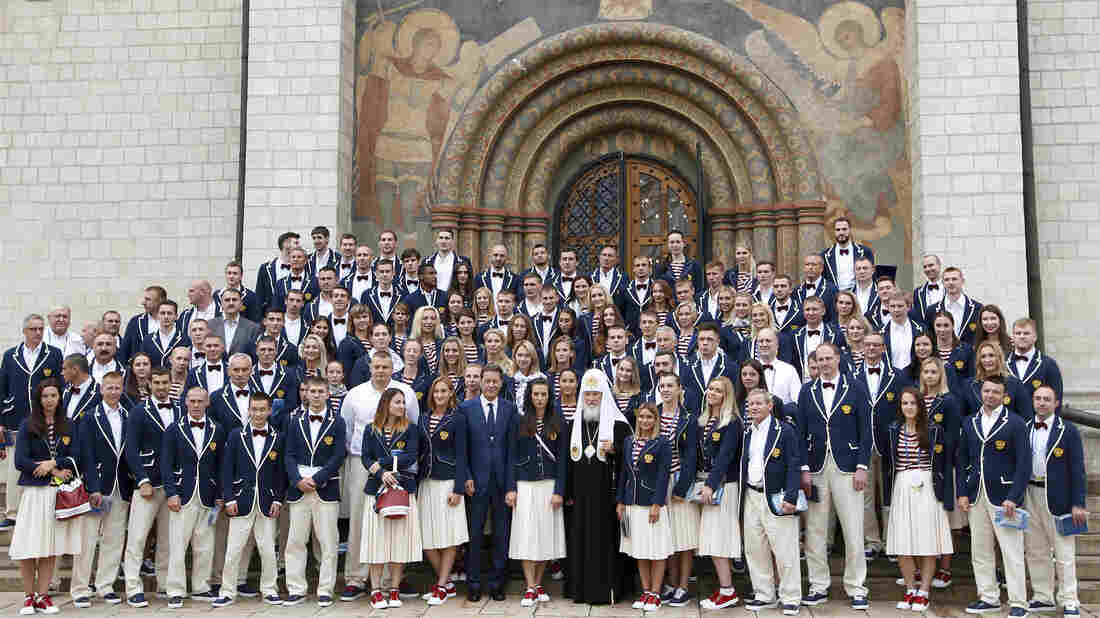 Russian Olympians, along with coaches and other officials, pose outside the Assumption Cathedral in Moscow on Wednesday before heading to Brazil. Russia had planned to send nearly 400 athletes to the Rio Games, but more than 110 have been banned because of a doping scandal. Alexander Zemlianichenko/AP hide caption 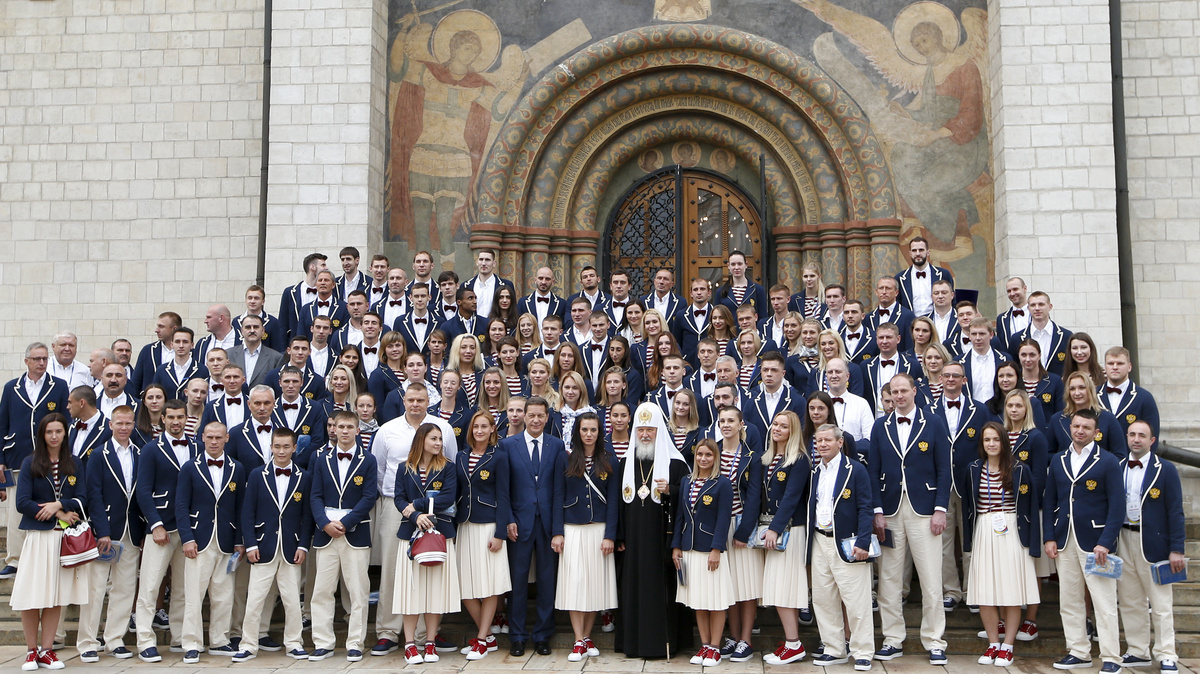 Russian Olympians, along with coaches and other officials, pose outside the Assumption Cathedral in Moscow on Wednesday before heading to Brazil. Russia had planned to send nearly 400 athletes to the Rio Games, but more than 110 have been banned because of a doping scandal.

First the Russian track and field team was barred. Then most of the Russian rowing squad was told to stay home. Now the Russian weightlifters are all out.

The International Olympic Committee decided on July 24 not to ban the entire Russian team, consisting of nearly 400 athletes, from the Summer Games that open Friday in Rio de Janeiro. But the IOC did tell the various sporting federations to take a close look at the Russians, and as they've done that, the number of ineligible Russians kept rising.

The International Weightlifting Federation barred all eight Russian weightlifters last Friday, the most recent additions to the already long list. The federation said the doping results from the Russians were "extremely shocking and disappointing."

Altogether, more than 110 Russian Olympians have been banned. With the games just days away, that number appears to be more or less final.

Doping has been a chronic problem at the Olympics, and the IOC began drug tests at the 1968 Games. Since that time, 119 athletes from all the competing nations have tested positive for banned substances at the Summer Games.

That figure covers athletes who were detected at the Olympics, and does not include athletes who were barred in advance, as has happened with the Russians this year. Still, the number of Russian athletes banned this year far surpasses any previous episode.

The Olympic Storylines You Absolutely Need To Know

The Russians have tried to put a positive spin on this. Russian Sports Minister Vitaly Mutko declared last Friday that 272 Russian athletes have been cleared to compete in Rio.

At Russia House in Rio, the place on Copacabana Beach where Russian athletes, officials, fans, will gather during the Games, the mood Tuesday was relaxed as workers pounded nails and put the finishing touches on a performance stage and decorations.

One man did seem harried. Konstantin Vybornov, the press attache for the Russian team, agreed to an interview with NPR, but only after finishing up 30 minutes of "urgent" phone calls.

Vybornov said the ongoing process of vetting Olympians is prompting a range of emotions. For those banned, "it is many, many tears and broken hopes." He says it's been very difficult for track and field athletes, where the whole team was barred, except for one athlete.

Some Russian athletes are still in limbo and have come to Rio with no guarantees they will be allowed to compete.

"They have no choice," Vybornov said, adding, "They need to be 100 percent fit and ready to start. If the decision will be positive for them they will go and they will start. If it will be negative, they will go home."

"We have to make changes," he said. "There are problems and we have to resolve them as soon as possible."

But, like other officials from his country, Vybornov questioned the severity of the sanctions and the scope of the doping problem. He insisted there's no proof of widespread, state-sanctioned doping as alleged by the World Anti-Doping Agency last month in a detailed report.

And he said with a chuckle that the Russians cleared for Rio "will be the cleanest team in the world for sure. Every sportsman on this team was checked about the doping much, much more than every other sportsman in the world."

Of the Russians who have been banned, 68 are members of the track and field team. The lone exception is Darya Klishina, a long jumper who trains — and has been tested — in the United States.

The Russians will also be scarce in rowing, where 22 of the 28 rowers and coxswains have been barred by the The World Rowing Federation.

The rowing federation said that none of the 22 had tested positive for banned substances, but they were being tested time and again at the Moscow lab that's been implicated in falsifying test results, according to the anti-doping agency.

The 22 "are not at all considered to have participated in doping, but do not meet the conditions established by the IOC in their decision of 24 July 2016 for participation in the Rio 2016 Olympic Games," the federation said.

In general, athletes who need explosive speed, raw power and great endurance are more likely to be flagged — think track and field, weightlifting and rowing.

Meanwhile, those relying on more precise skills, like gymnastics, archery and fencing, are likely to be at the Rio Games.

Here's how some other Russian sports have fared, according to Around The Rings, an online publication devoted to Olympic coverage:

-- Seven of 67 swimmers, divers and water polo players have been banned.

-- Five of 23 athletes in canoeing have been declared ineligible.

-- The entire gymnastics team, consisting of 21 athletes, has been cleared to compete.