Accessibility links
U.S. Women Will Rule In Rio (You Can Thank Title IX) : The Torch American women are poised to win far more medals than any other women's squad in Rio. As part of their relentless rise, they're also expected to outpace the U.S. men. 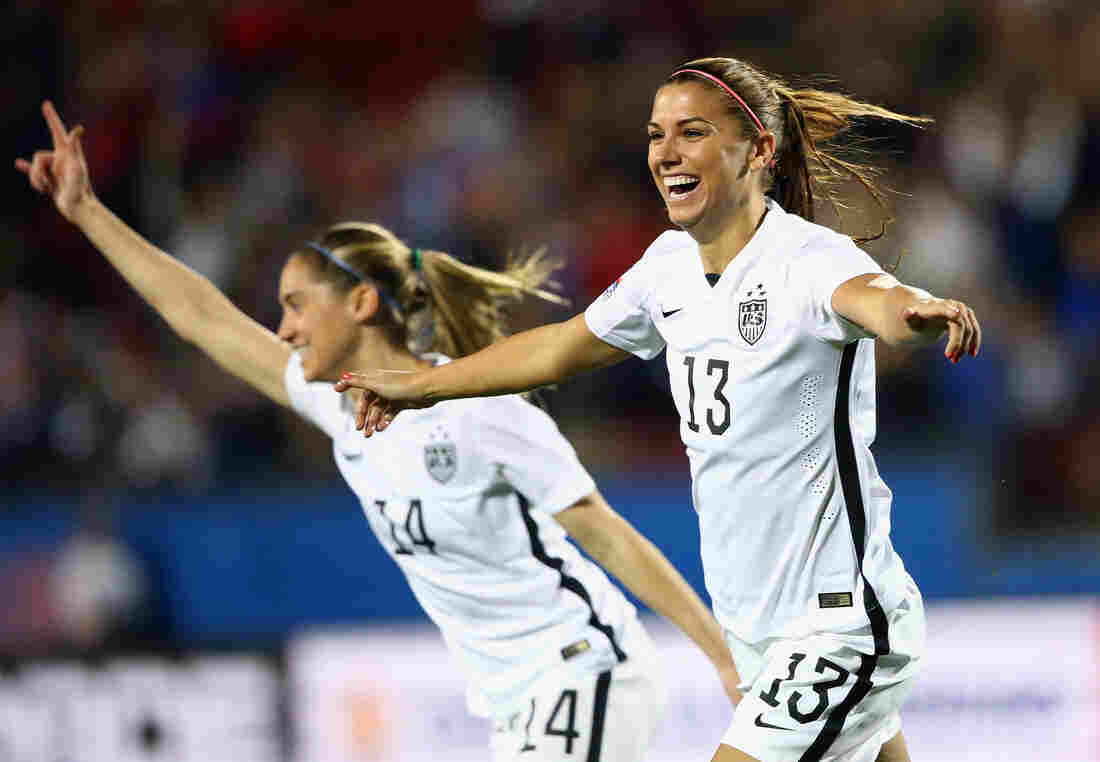 Alex Morgan of the U.S. women's soccer team celebrates a goal against Puerto Rico during the 2016 Women's Olympic Qualifying game on Feb. 10 in Frisco, Texas. The U.S. team will be going for its fourth straight gold, reflecting the dominance of American women at the Olympics, particularly in team sports. Ronald Martinez/Getty Images hide caption 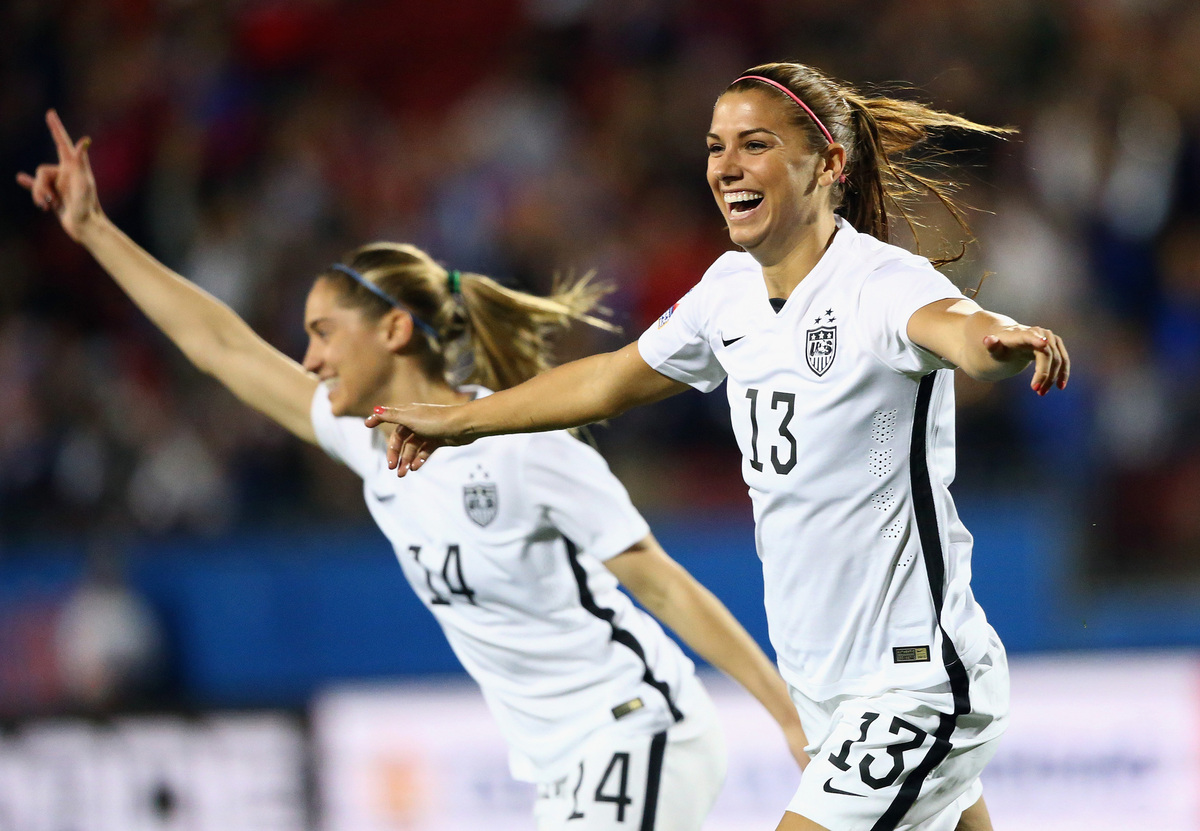 Alex Morgan of the U.S. women's soccer team celebrates a goal against Puerto Rico during the 2016 Women's Olympic Qualifying game on Feb. 10 in Frisco, Texas. The U.S. team will be going for its fourth straight gold, reflecting the dominance of American women at the Olympics, particularly in team sports.

American women were not exactly a powerhouse at the 1972 Summer Olympics: They won just 23 medals, compared with 71 for the U.S. men. The women were absent from the medal podium in gymnastics. They didn't win a single gold in track and field, managing just one silver and two bronze.

But something else happened that year. The U.S. Congress passed Title IX, which bars sex discrimination in education programs receiving federal money. Sports wasn't the focus of Title IX. In fact, quite the opposite.

"Sports was quietly slipped into the law, and no one seemed to pay much attention," said Deborah Larkin, CEO of the Women's Sports Foundation, which works to improve opportunities for female athletes. "The thinking was that not many girls play sports and not many would want to."

Today, Title IX is credited with revolutionizing women's sports, and the Olympics offer one measure of how dramatic that transformation has been.

At the 2012 Olympics in London, U.S. women won more medals than American men — 58 to 45 — for the first time. London also marked the first time the U.S. sent more women to the games than men.

And in the Rio Games that start Friday, American women will again outnumber men (292 to 263), with the U.S. women heavily favored to be the more decorated half of the mightiest Olympic team in the world. 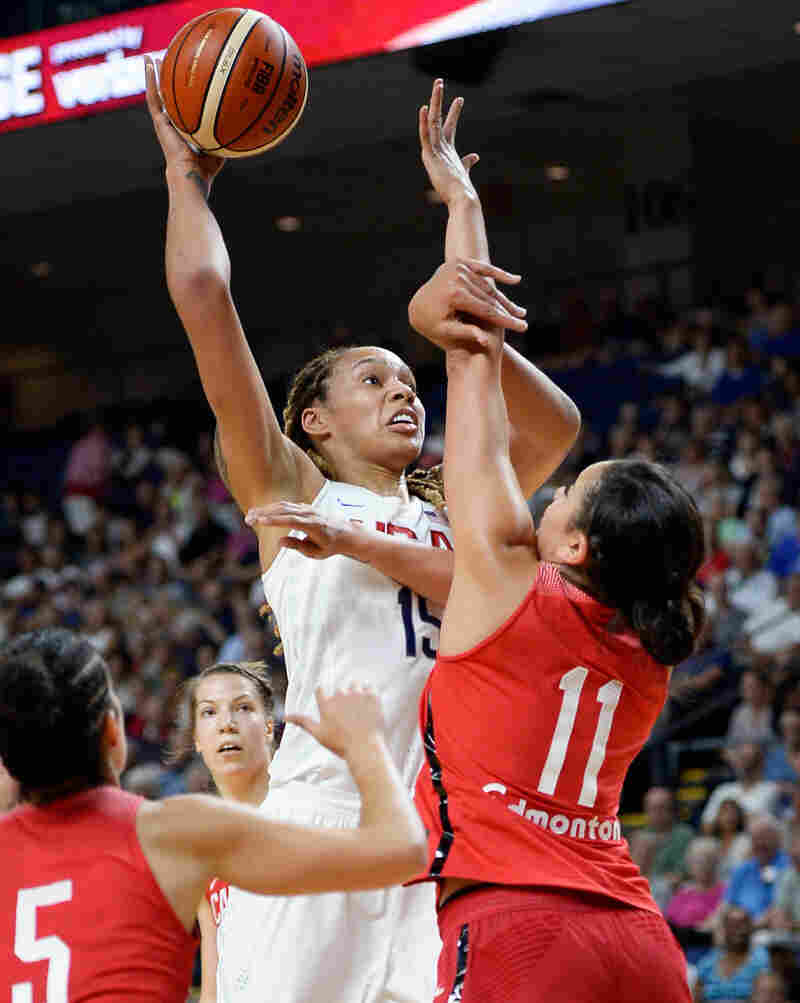 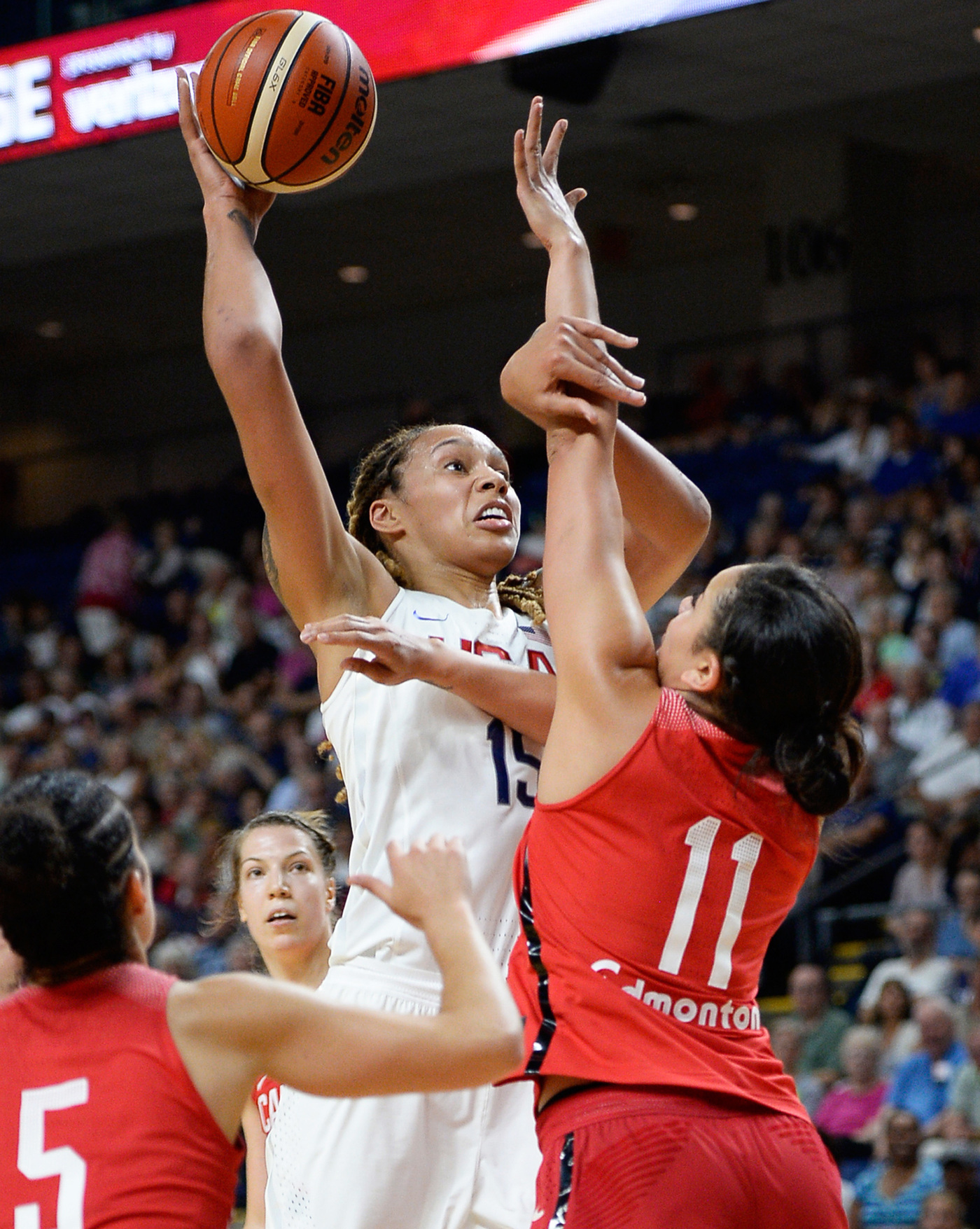 United States' Brittney Griner shoots against Canada's Natalie Achonwa during an exhibition basketball game on July 29 in Bridgeport, Conn. The U.S. women's basketball team has won 41 straight games at the Olympics and is going for its sixth straight gold medal.

In many team sports, especially those widely played at American universities, U.S. women have become all but invincible.

The women's basketball team last lost an Olympic game in 1992 and is now working on a 41-game winning streak as they shoot for their sixth straight gold.

With Brittney Griner, Tamika Catchings and Diana Taurasi — all former college stars now in the WNBA — the women are likely to face their toughest challenge in an intersquad scrimmage.

The women's eight in rowing hasn't lost an Olympic race or a world championship race since 2006.

The women's water polo team is the reigning Olympic champion and again the favorite.

"What the history of Title IX shows us is that if you provide women with quality sports opportunities, they'll come and they'll excel," said Nancy Hogshead-Makar, winner of three gold medals and a silver as a swimmer at the 1984 Olympics in Los Angeles.

As a strong, muscular, ambitious athlete growing up in Jacksonville, Fla., in the 1970s, "I felt like the gender police were there at every corner. There was concern about my femininity and my ability to get married," she said.

Title IX helped change her life. In 1980, she became the first female swimmer to receive an athletic scholarship at Duke University, which helped pave the way to the Olympics four years later. 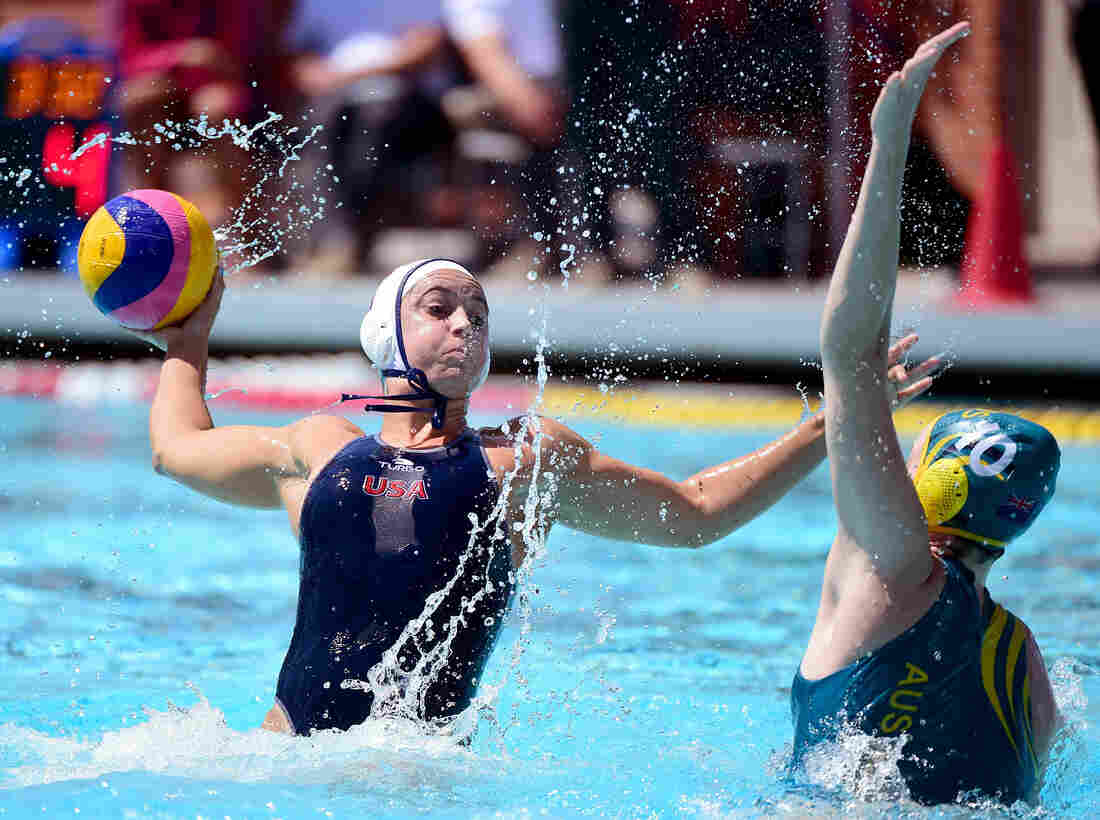 Maggie Steffens of the U.S. women's water polo team prepares her shot against the Australian team on May 22 in Los Angeles. The American team is the reigning Olympic champion and is favored to win again in Rio. Harry How/Getty Images hide caption 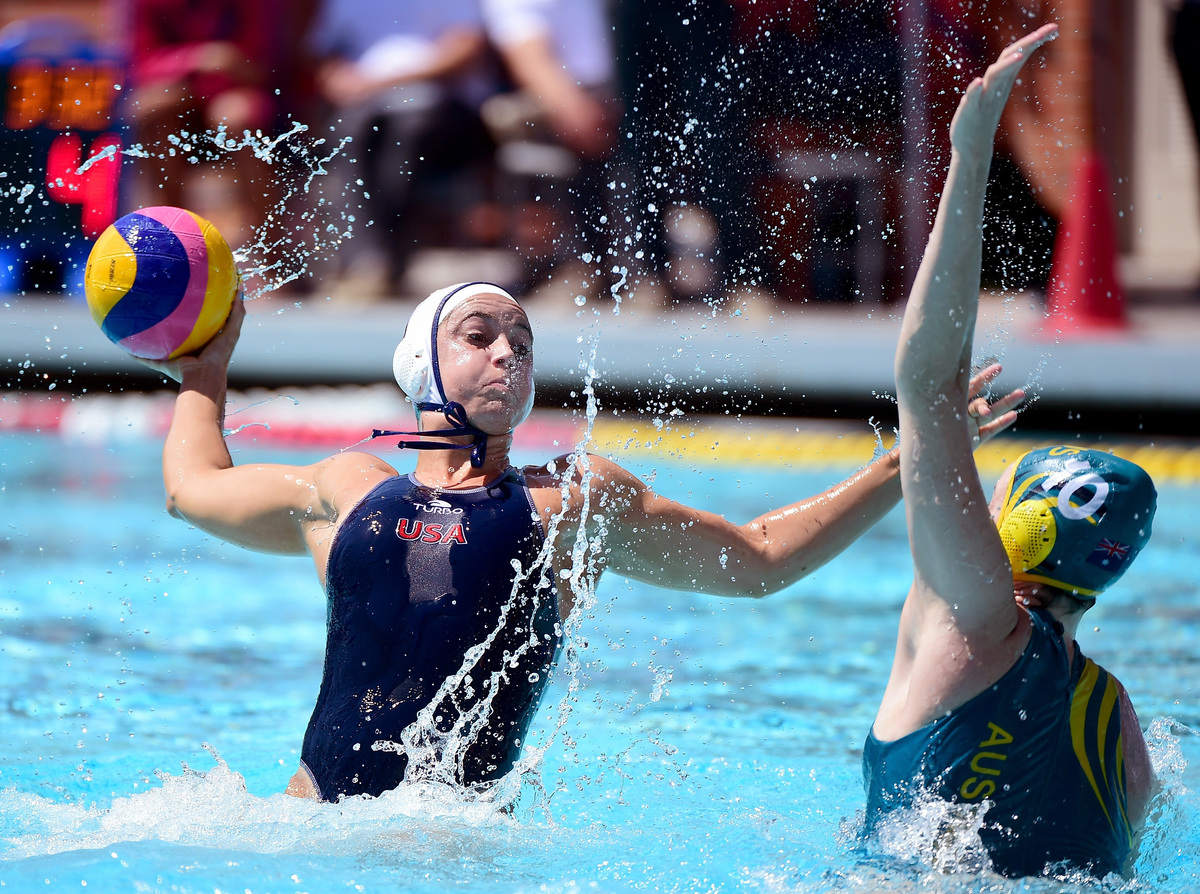 Maggie Steffens of the U.S. women's water polo team prepares her shot against the Australian team on May 22 in Los Angeles. The American team is the reigning Olympic champion and is favored to win again in Rio.

While Title IX may be the biggest driver, U.S. women athletes are winning at the Olympics and elsewhere for multiple reasons.

The rise of women's sports mirrors the greater prominence of women in every facet of American life, from the Olympics to this year's presidential campaign.

The collapse of the Soviet Union and other communist countries in Eastern Europe meant their heavily subsidized sports programs were no longer as powerful as they once were.

And additional women's sports are added to the Olympics with regularity, which means there are simply more medals to be won.

When women first competed in the Olympics in 1900, they were limited to two sports, golf and tennis. Track and field wasn't added until 1928. There was no women's marathon until 1984, partly out of concern it was too strenuous. Women's wrestling arrived in 2004, boxing in 2012, and Rio features women's rugby for the first time.

In the U.S., girls are now introduced to a wider range of sports at earlier ages, both inside and outside of school, than in most any country in the world.

But as the sport has become more popular in the U.S., Americans have become dominant globally. The five-woman U.S. squad is the prohibitive favorite in Rio, led by Simone Biles, 19, who is outshining teammate Gabby Douglas, 20, the star of the London Games. The Americans are so talented they could probably send a second team that would be the second best in the world.

The top gymnasts are products of local gyms and individual coaches, and they usually achieve national prominence by their mid-teens, well before college.

In tennis, too, many top players spend little if any time at universities. Yet the U.S. is fielding the world's top-ranked women's tennis team, better known as the Williams sisters.

Serena Williams, 34, will be defending her gold in singles and will team up with Venus, 36, as they go for an unprecedented fourth straight Olympic gold in doubles.

They were born in Compton, Calif., and their formative training came at a year-round tennis academy in Florida, where their father moved the family to help the girls, 9 and 10 at the time, develop their games.

Three of the other four women on the U.S. team honed their skills at similar academies in South Florida, moving to the area to focus on tennis before they were teenagers.

And in the swimming pool, the biggest American female star is Katie Ledecky, 19, who won a gold at age 15 in London. She's a product of a swim team in suburban Washington, D.C., and has foregone endorsements so she can keep her amateur status and could swim in college at Stanford.

So as the American women dominate the world stage, have they reached equality with men at home?

Not yet, says Hogshead-Makar, the 1984 Olympian who's now a lawyer in Jacksonville. She runs Champion Women, a nonprofit group that's currently pursuing gender equality cases with more than 50 colleges it says are not compliant with Title IX.

"We've taken many steps toward gender equality, but we're just not there yet," she said.

Larkin, of the Women's Sports Foundation, says one area where women still lag behind is opportunities in professional sports. There's big money for the top players in some individual sports like tennis and golf. And the occasional breakthrough star, like Gabby Douglas, can receive millions in endorsements.

But when it comes to team sports, like basketball and soccer, most salaries are still relatively modest.

"I don't want to make this just about dollars and cents," said Larkin. "But we'd still like to crack some more ceilings."