Accessibility links
An American Muslim Fencer Lunges Into U.S. Olympic History In Rio : The Torch Fencer Ibtihaj Muhammad is set to become the first U.S. athlete to compete in the Olympic Games while wearing a hijab. 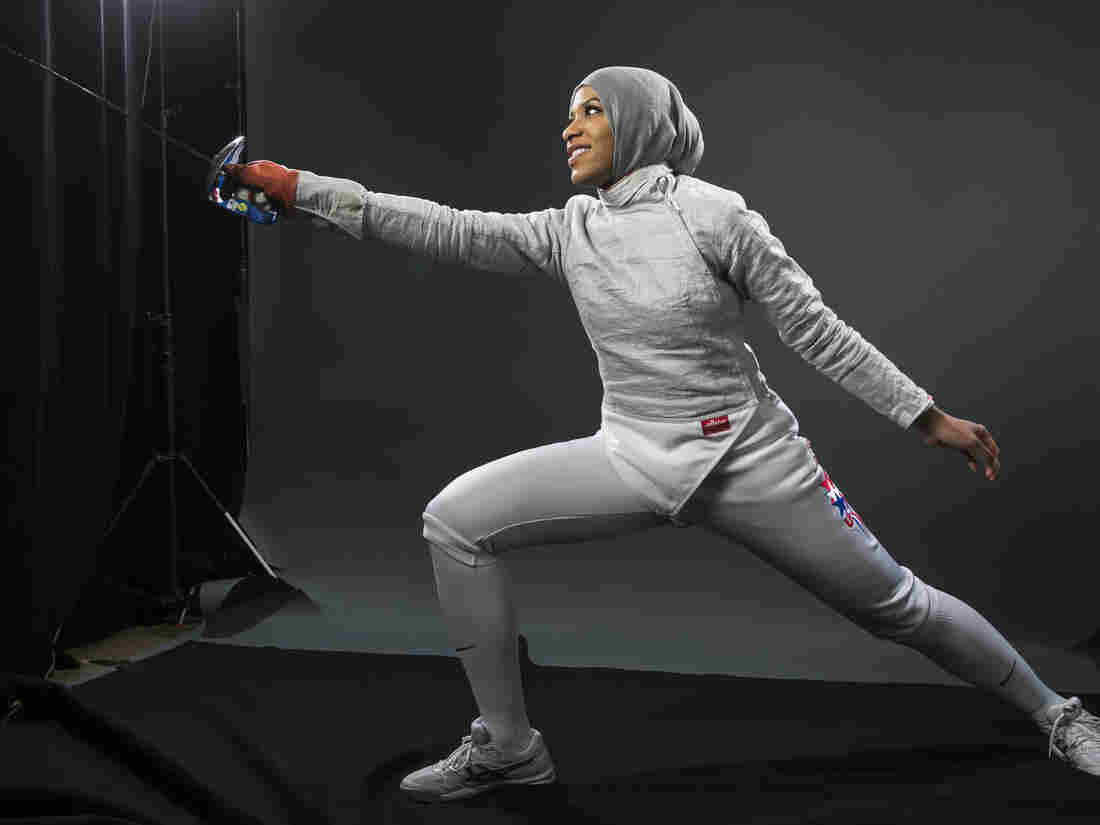 Fencer Ibtihaj Muhammad is set to become the first U.S. athlete to compete in the Olympics while wearing a hijab. Damian Dovarganes/AP hide caption 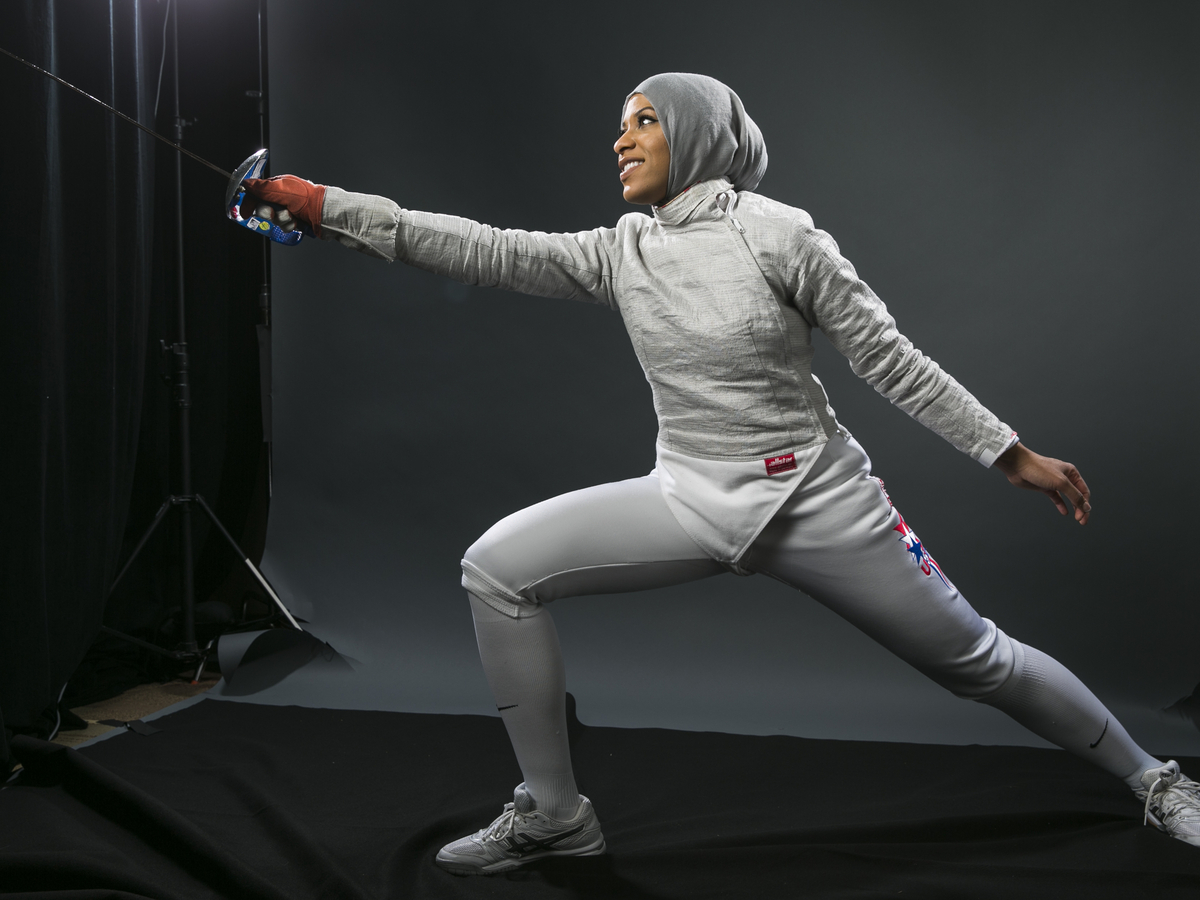 Fencer Ibtihaj Muhammad is set to become the first U.S. athlete to compete in the Olympics while wearing a hijab.

Even if fencer Ibtihaj Muhammad doesn't medal at the Rio Olympics, she is set to make the history books.

Once she hits the fencing strip for her first bout in the women's individual sabre competition on Aug. 8, she will become the first U.S. Olympic athlete to compete while wearing a hijab. 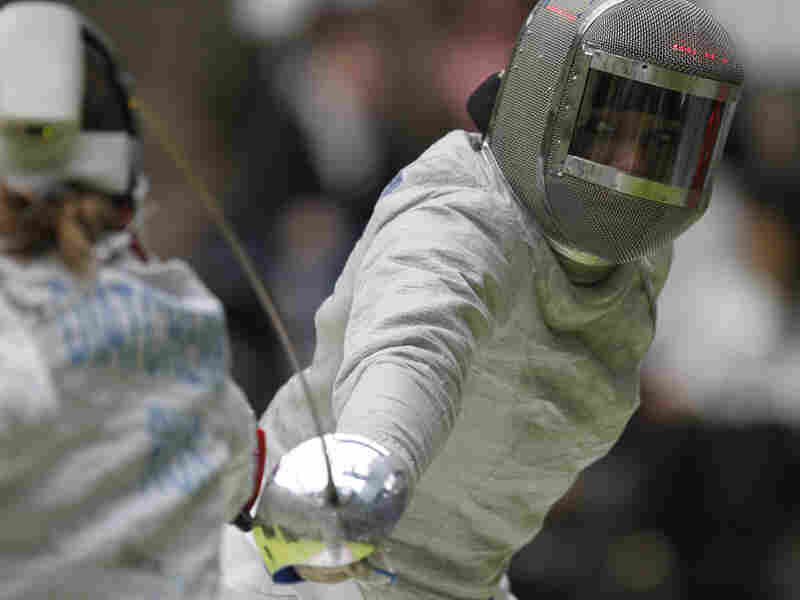 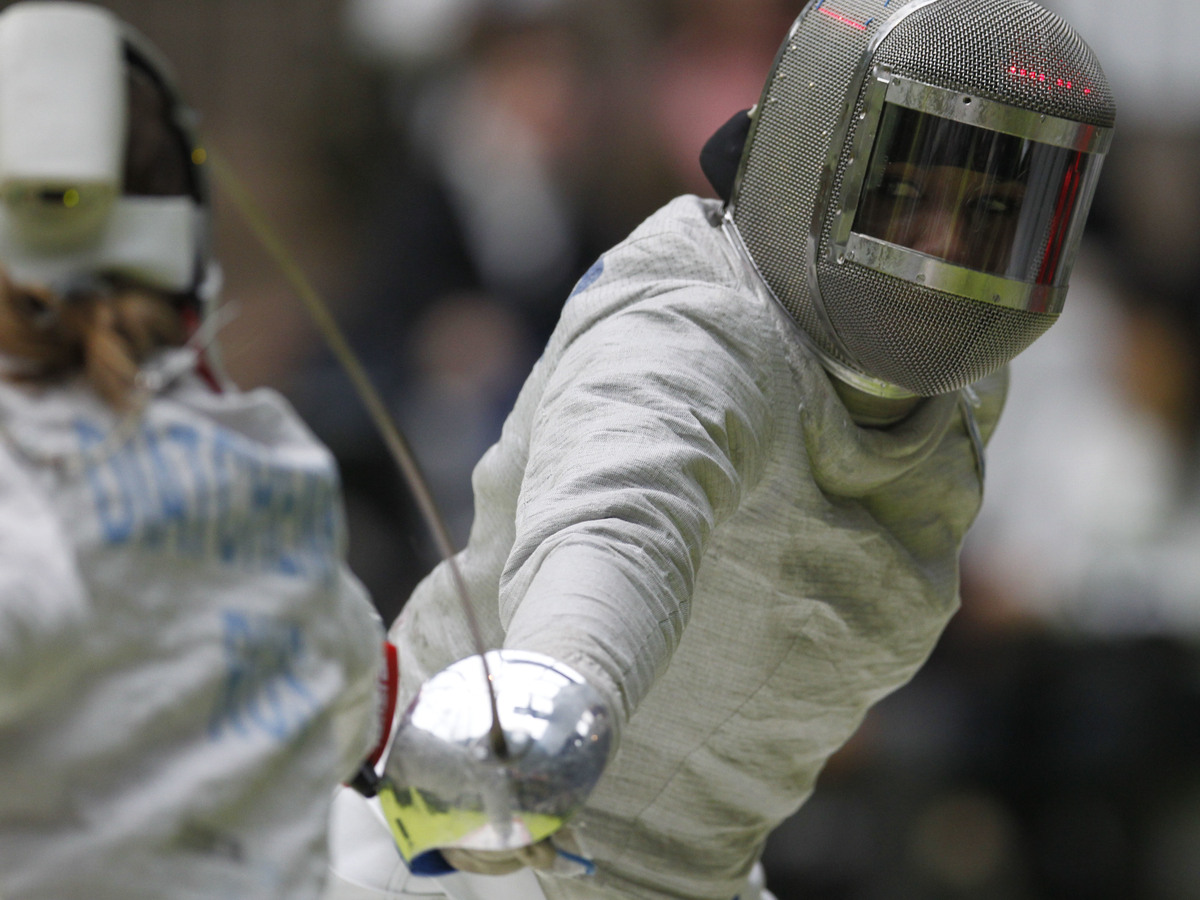 The only Muslim woman on Team USA this summer, Muhammad says she didn't find fencing. The sport found her when she was 12, during a car ride with her mother. They were passing a fencing practice at her local high school in Maplewood, N.J., and her mother couldn't help but notice what the athletes were wearing.

"Fencers, they wear long jackets, and they wear long pants. And as a Muslim youth, I was looking for a sport where I didn't have to alter the uniform in any way," explains Muhammad, now 30.

She began covering in high school as part of her faith. To play volleyball, she wore sweatpants and a T-shirt along with her team's uniform, never feeling fully part of the team.

Fencing solved that problem and, she says, gave her focus.

"I enjoy being able to critique myself when I'm finished fencing," she said in a 2012 interview with NPR's Michel Martin. "It's really easy to lose and be able to fix your mistakes, whereas on a team, you know, I guess whether you win or lose can be in the hands of someone else, and I've never felt comfortable with that."

At this year's Women's Sabre World Cup in January, Muhammad took home bronze. It was enough for her to finally make the U.S. Olympic team. In the months before arriving in Rio, she continued her training at the Fencers Club in New York City with her coach, Akhnaten "Akhi" Spencer-El, who started working with her in 2009. 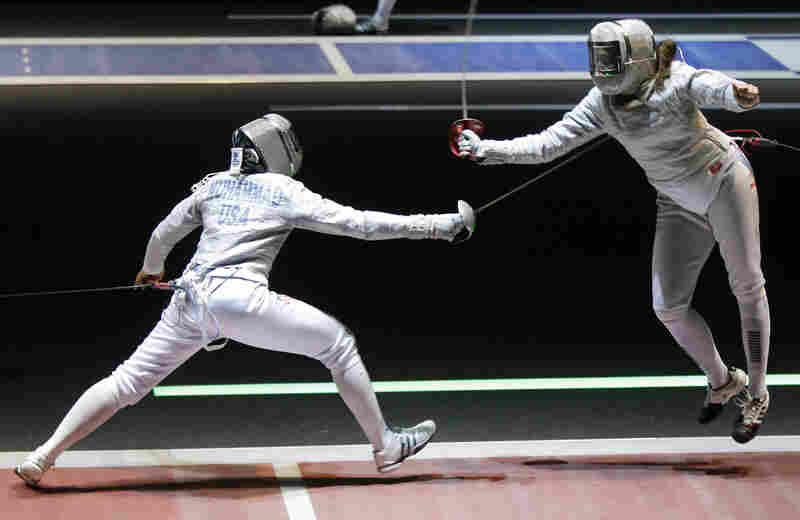 Spencer-El says her personality is a perfect fit for sabre fencing — strong-willed, aggressive and determined to win since day one.

"Sometimes her personality would get her in trouble only because young kids, they question things — you know, 'Why do I have to do push-ups' and stuff," he says. "But when you do that, you know, there are consequences."

Over the years, Muhammad learned to channel that spirit. She's now ranked No. 2 in the U.S. and eighth internationally in women's sabre fencing. She also launched a fashion line of modest women's clothing after graduating from Duke University.

Through it all, Spencer-El says she has stayed poised against her competitors and a harsh public spotlight while wearing a hijab.

"Going through security and everybody comes out but her, or taking her into another place in the airport to search her than everyone else — it really doesn't even faze her. It's like, 'Here we go again,' I guess," he says.

She shared some of her frustration with her Twitter followers in March after an incident with a volunteer at the South by Southwest festival.

I was just asked to remove my hijab at SXSW Registration for my ID badge.. I can't make this stuff up #SXSW2016

The festival organizers later apologized to Muhammad, who was invited to speak on a panel called "The New Church: Sport as Currency of American Life."

Westbrook first met Muhammad through the foundation he started to introduce fencing to youth from underserved communities in the New York City area. Most of the students in his Saturday fencing classes are black or Latino and from single-parent homes.

Back in 1984, Westbrook became the first African-American fencer to win an Olympic medal. The bronze medalist says he uses that experience to help Muhammad navigate through a predominantly white sport.

"She's used to fighting. She's used to things coming at her," he says. "This sport is natural for her, because this is a nerve sport."

The daughter of a retired special education teacher and a retired narcotics detective, Muhammad says she'd prefer to focus only on fencing. But the bigotry she has faced has pushed her to speak out about discrimination against the Muslim community.

In April, she tweeted about a man who she says followed her down a street in Manhattan, telling her that she looked "suspicious" and asking if she was "going to blow something up."

"America is all that I know. I feel American down to my bones. For anyone to challenge that idea, that I'm not American or that I don't belong, it's frustrating," Muhammad says. "I want people to see a Muslim woman in hijab and represent the United States this summer. I don't want people to think that that's out of the norm."

Muhammad says she wishes she wasn't the first Muslim woman in a hijab to represent Team USA. But she hopes she won't be the last.