Accessibility links
How The Olympic Medal Tables Explain The World : The Torch They are a concise lesson in world history, reflecting wars won and lost, economic growth and decline and a country's overall standing in the world. 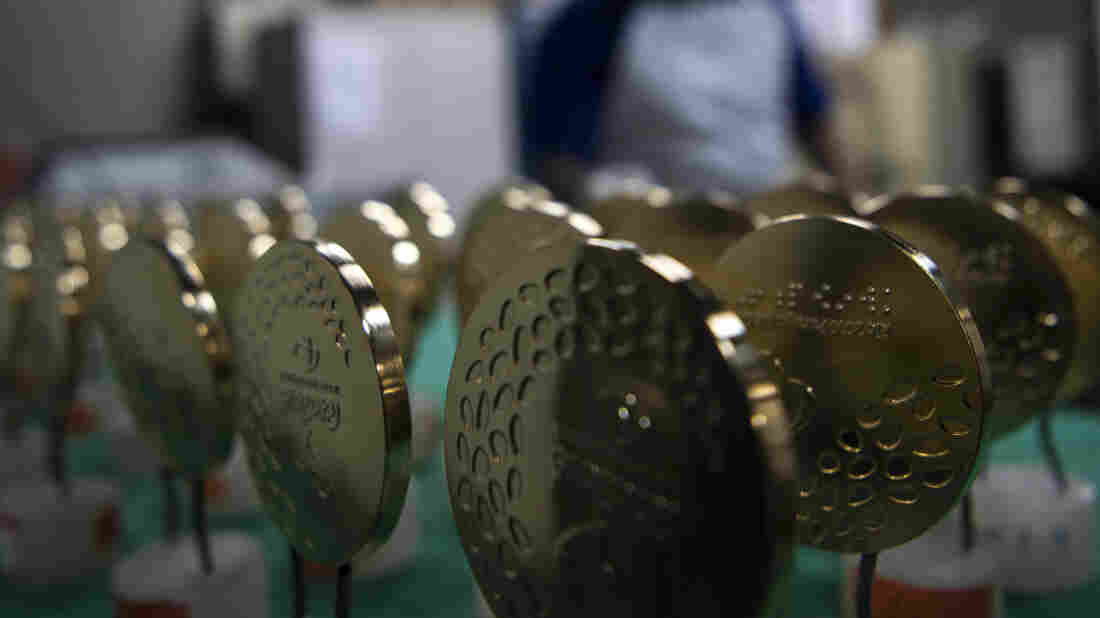 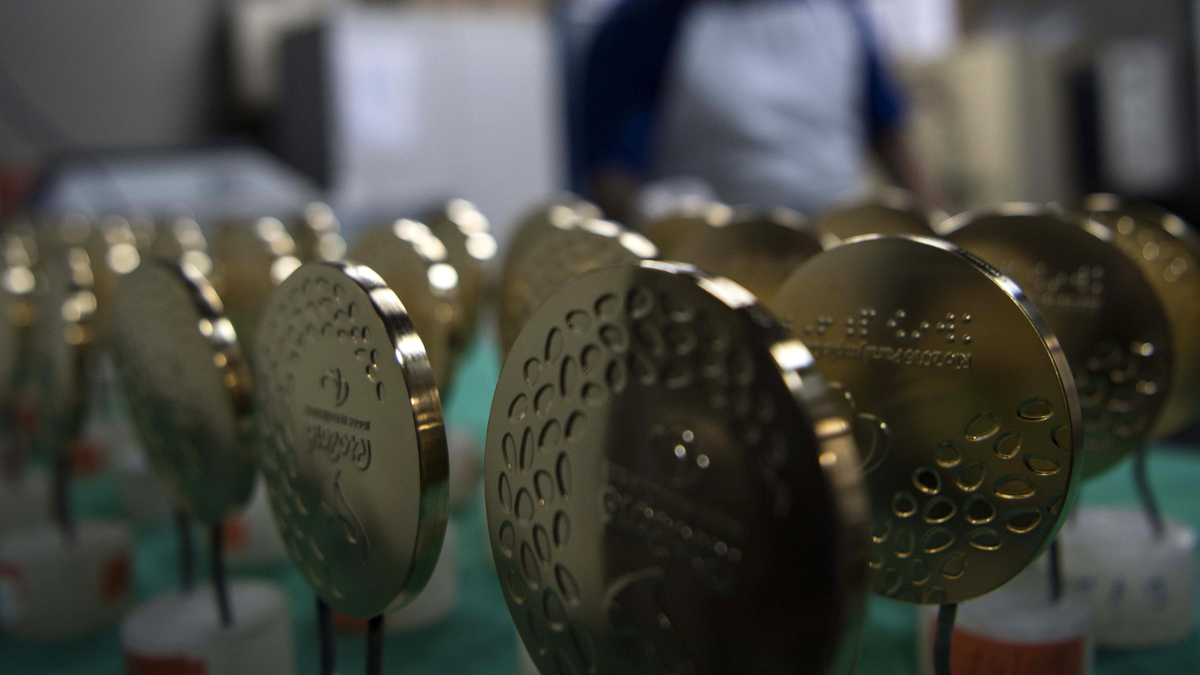 Gold medals for the Rio Olympic Games are displayed at a coin factory in Rio de Janeiro, Brazil, on July 18.

Imagine a Martian trying to make sense of this world and the only available data are the Summer Olympic medal tables from the past century.

How much would that explain? Quite a lot, it turns out. In fact, it would be challenging to find anything else so concise that says so much about the past century as the tables below.

The four bar charts show the countries that usually win the largest share of medals — the United States, China, Russia and Germany — and how they have performed since 1912.

They pinpoint the highs and lows of each nation, not just inside the Olympic arena, but wars won and lost, economic growth and decline, and a nation's overall standing in the world.

And much more. For starters, you can tell instantly when the two world wars were raging, forcing the cancellation of the Olympics in 1916, 1940 and 1944.

Another point that leaps out is the remarkable stability and consistency of the U.S. compared to other leading nations. The U.S. routinely won 15 percent to 20 percent of all the medals awarded during most of the 20th century.

That figure has been edging down over the past few decades, a reflection that the games have gone from a Western-dominated event to a more globalized competition featuring the rise of many developing nations.

In other words, a lot like world politics and the global economy in general.

Still, U.S. athletes have taken home at least 10 percent of the medals in every Summer Olympics in which they took part, and they're expected to be around that figure again in Rio. The Americans won 104 out of 962 medals in London in 2012, more than any other country, as has been the case since 1996.

Two U.S. performances break the mold — 1980 and 1984 — and they also signal the political turmoil of those Cold War years. In 1980, the U.S. boycotted the Moscow Games because of the Soviet invasion of Afghanistan a year earlier.

And in 1984, the U.S. had a huge medal haul in Los Angeles, in part because the Soviets and their communist allies returned the favored and boycotted the U.S.-hosted games.

China's absence from the Olympics for most of the 20th century reflects a nation that was roiled by political upheavals for decades, followed by an inward-looking Communist government. But China began opening to the world around 1980 and took part in its first Summer Olympics in 1984, where it made a strong first impression.

China's performance has continued to surge dramatically and it now takes home close to 10 percent of the medals. When Beijing hosted the games in 2008, China won more golds than any other country (51), though not as many overall medals as the U.S. (110 to 100).

Starting from zero three decades ago, China now has the second strongest Olympic team — and the world's second biggest economy — trailing only the U.S. on both counts.

Czarist Russia and its successor, the Soviet Union, were Olympic non-entities until the Cold War commenced after World War II. The Olympics then became an all-out competition between the Soviets and the Americans, with athletics as a proxy war. The stakes were international prestige, and winning more medals buttressed claims of a superior political and economic system.

The Soviets invested enormous resources in Olympic sports and quickly surpassed the U.S., winning the most medals at every Summer Games from 1956 to 1992, except for 1968, when the Americans edged them (and in 1984, when the Soviets stayed home).

The "Soviet Union" even topped the charts in 1992, though it had collapsed and ceased to exist a year earlier. The 15 newly independent countries were allowed to compete as the Unified Team in those games.

The Russians have come down a few notches since then, and the Rio Games are already as disaster with nearly 120 athletes — close to a third of the Russian team — banned because of a doping scandal.

One footnote: If you add the medals won by the 15 former Soviet states, they still top every other country these days, though they also send many more athletes.

Germany was an Olympic powerhouse until World War I knocked them out of the Games after 1912, and they didn't return until 1928. They came back with a vengeance in 1936 as Hitler turned the Games into a Nazi propaganda spectacle.

But after that Germany was gone again until 1952 as they rebuilt from the ashes of World War II. The Germans then made a second roaring comeback as two nations, East and West Germany.

Communist East Germany built something akin to a sports factory, winning an astounding number of medals with performances that were eventually shown to be heavily fueled by doping.

Still, when Germany reunited in 1990, the conventional wisdom was that the country would win so often the German national anthem would become the Olympic theme song.

It didn't work out that way. Germany still performs well and is a leader among Western European nations. However, its share of medals steadily declines — a lot like Europe's political and economic clout on the world stage.

So there you have it, a century of world history in four charts.

But there's more. As we pored over the tables, we were intrigued by the overachievers and underachievers around the globe.

The chart is self-explanatory, but it's so striking we'll reinforce it here.

New Zealand and Jamaica clearly punched far above their weight at the 2012 Games.

In Jamaica's case, their blazing sprinters keep bringing them Olympic glory, and you can bank on that again in Rio.

Usain Bolt, the 6-foot-5 lightning bolt, is pursuing an unprecedented third straight gold in the men's 100 meters. Though she's much less well known, Shelly-Ann Fraser-Pryce, a 5-foot-0 dynamo, is trying to do precisely the same in the women's 100 meters.

With New Zealand, their best-ever Olympic showing brought medals in a wide range of sports, including rowing, sailing, track and field, canoeing, cycling and equestrian.

Combined, these two countries have just over 7 million people and won 25 medals in London.

At the other end of the scale, five of the world's more populous countries (India, Indonesia, Pakistan, Nigeria and Bangladesh) have more than 2 billion people — more than a quarter of the world's population — and won just eight medals combined.

Greg Myre is the editor of NPR's Olympic coverage in The Torch blog.