Accessibility links
Summer Olympics 2016: Opening Ceremony: 'It's Going To Be Awesome' : The Torch The Friday night spectacle could be "a drug for depression in Brazil," says the creative director of the show that viewers around the world will see tonight. 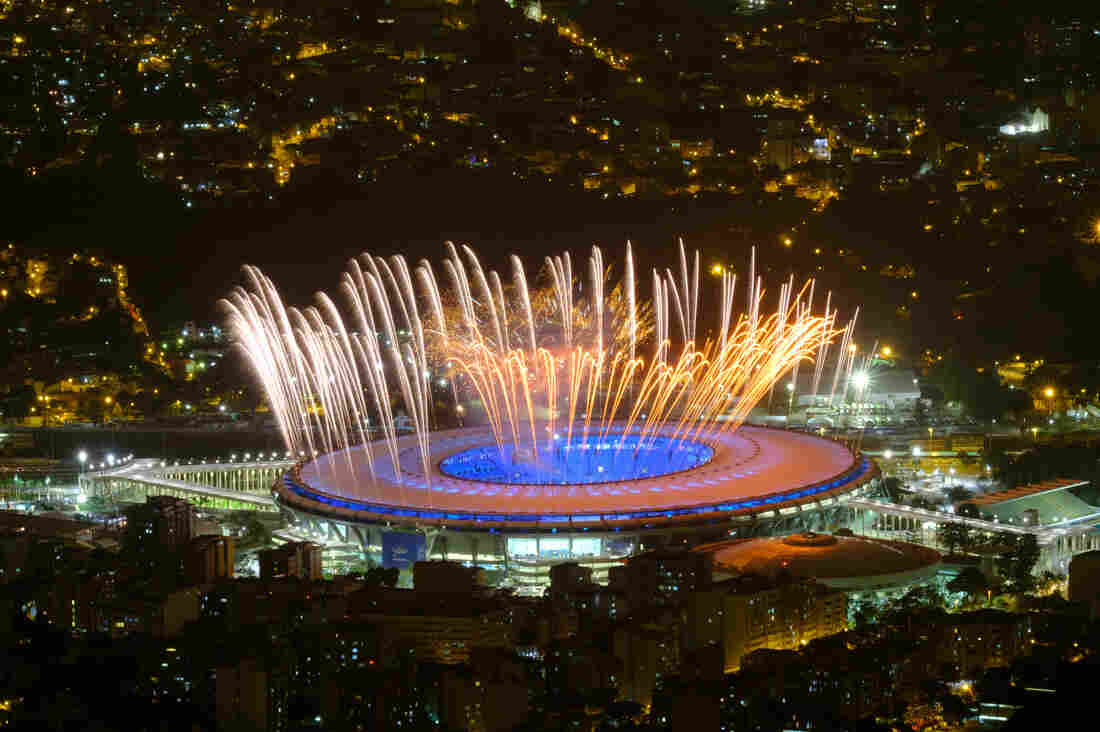 Fireworks light the sky during a rehearsal Wednesday for the opening ceremony of the 2016 Summer Olympics in Rio de Janeiro. Organizers hope the event, which will be held Friday night in Maracana Stadium, will lift the country's spirits after months of problems leading up to the games. Yasuyoshi Chiba/AFP/Getty Images hide caption 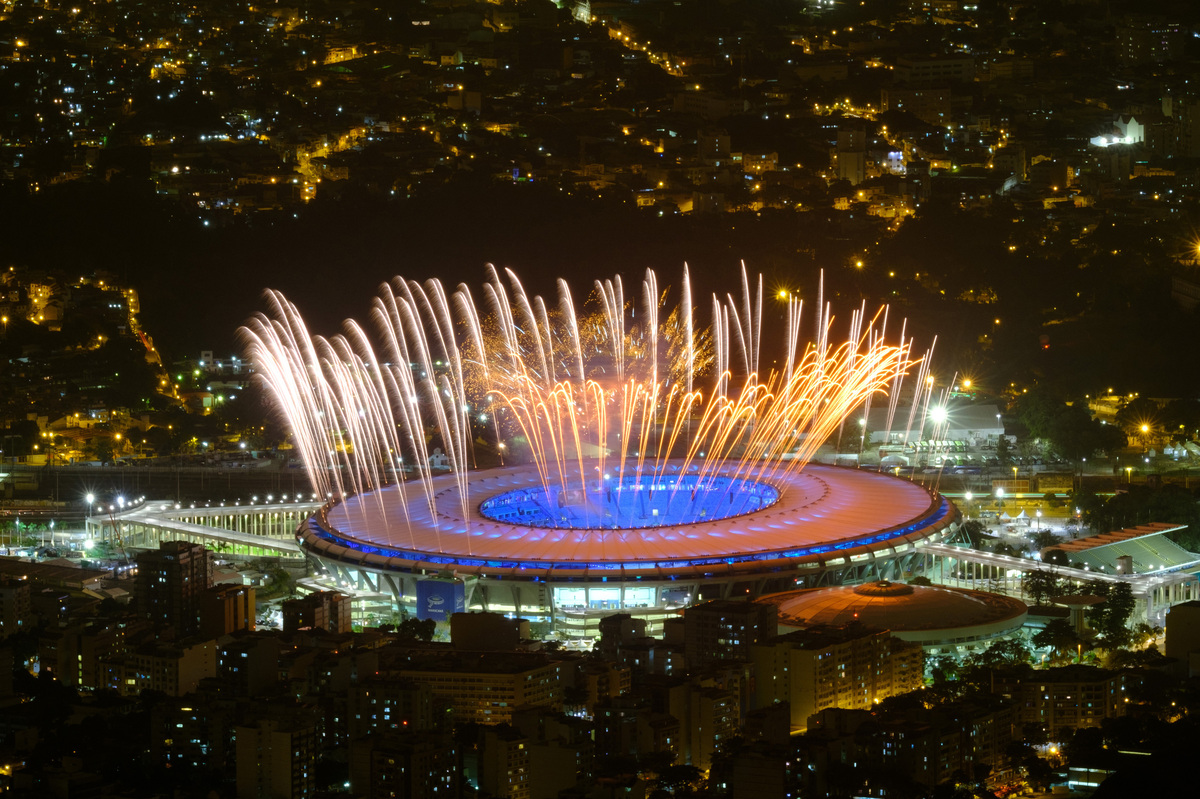 Fireworks light the sky during a rehearsal Wednesday for the opening ceremony of the 2016 Summer Olympics in Rio de Janeiro. Organizers hope the event, which will be held Friday night in Maracana Stadium, will lift the country's spirits after months of problems leading up to the games.

Two of Brazil's greatest strengths — its dazzling culture and its flair for spectacle — will power the Opening Ceremony of the Summer Olympics on Friday night. Organizers will unleash samba drums, singers and dancers in a show designed to thrill a global audience and silence the criticism surrounding the preparations.

To pull it off, producers had to figure out how to move thousands of athletes and hundreds of performers in and out of a stadium whose field presents a unique problem. As one official explains, "There is no entrance."

We'll dig into that later. For now, let's focus on the positive.

"I hope that the Opening Ceremony will be a drug for depression in Brazil," film director Fernando Meirelles says in material provided to the media in Rio de Janeiro.

Meirelles is one of three creative directors for the show. He's best known abroad as the director of City of God, the 2002 film that shares its name with a favela just five miles away from Rio's new Olympic Park. That film led to an Oscar for Meirelles. 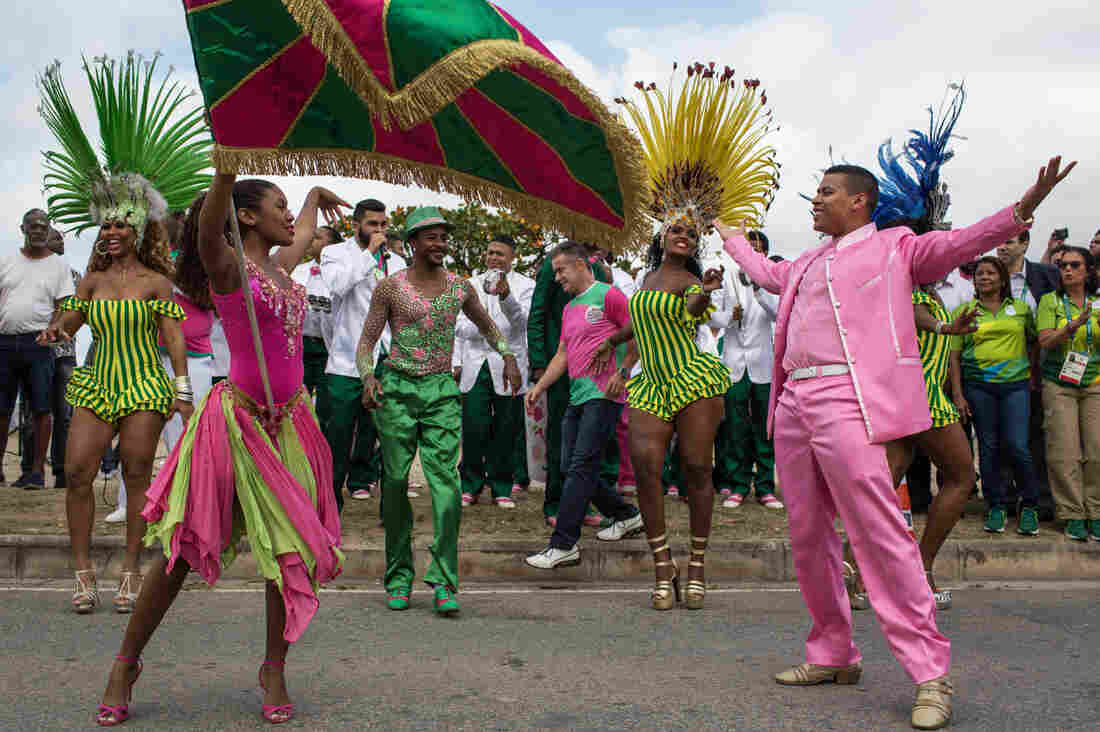 Dancers from the Mangueira samba school perform in the street Thursday while waiting for the arrival of the Olympic flame ahead of the games, which open Friday in Rio de Janeiro. The flame will be carried through the streets of Rio to Maracana Stadium for Friday night's opening ceremony. Chris McGrath/Getty Images hide caption 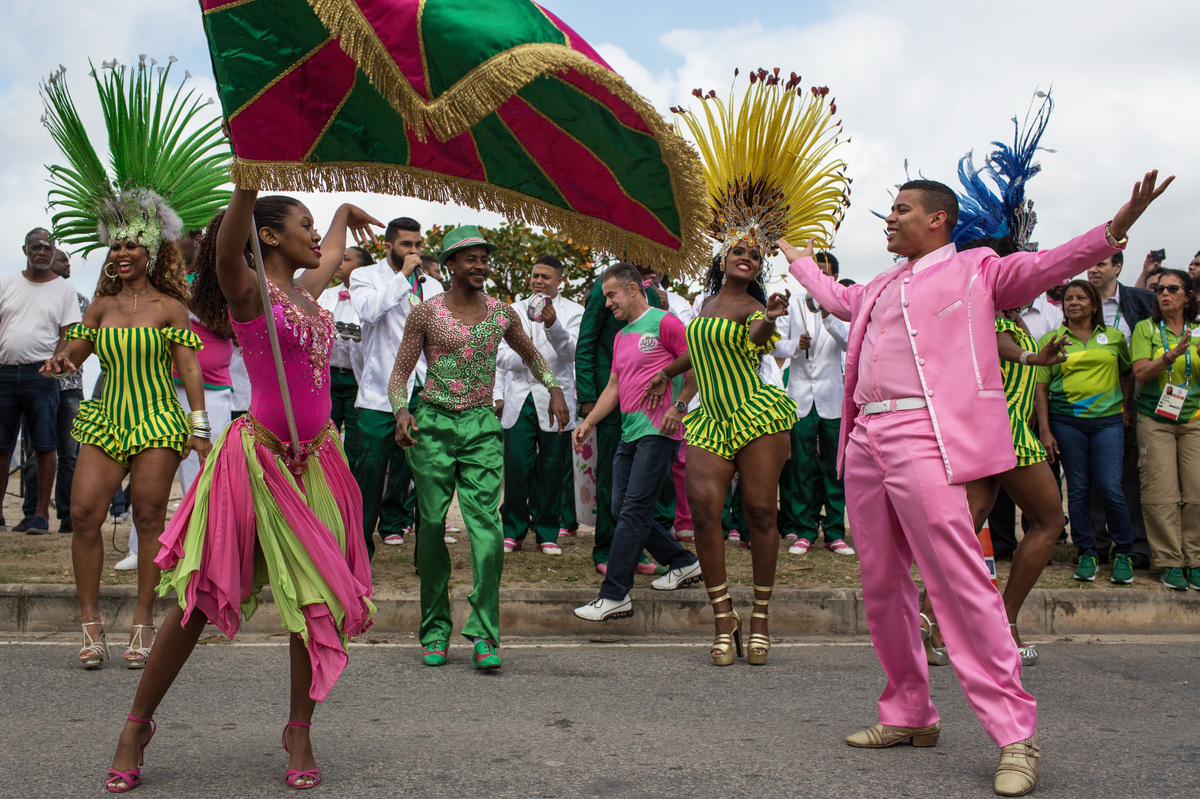 Dancers from the Mangueira samba school perform in the street Thursday while waiting for the arrival of the Olympic flame ahead of the games, which open Friday in Rio de Janeiro. The flame will be carried through the streets of Rio to Maracana Stadium for Friday night's opening ceremony.

The Opening Ceremony's highlights will range from singers such as the legendary Caetano Veloso and Gilberto Gil to MC Soffia, age 12.

Supermodel Gisele Bundchen will also play a role. The idea is to present a strong and beautiful message that drowns out the drumbeat of negative stories we've heard about these Olympics, from construction problems and the threat of the Zika virus to pollution and environmental concerns. And then there's Brazil's economic and political turmoil, which has exacted a toll on Friday's show.

For one night, Brazilians hope, all this can be set aside.

With the opening ceremony, "Brazilians can look at it and say we are a cool people, we are different ethnic groups, we live together, we never went to war, we are peaceful, we know how to enjoy life and we tend to be happy," Meirelles says.

Details about the show have been kept secret, but several pictures emerged from a dress rehearsal held Sunday, along with a few particulars.

Early on, expect to see Portuguese ships crossing a virtual Atlantic Ocean to Brazil's shores, followed by the subjugation of indigenous populations through slavery, booms in immigration, and explosive growth that eventually culminates in the creation of sprawling megacities like Rio.

Brazil's friendly customs and its natural attractions, such as the Amazon rain forest, will also play a role. In one portion, athletes will be given tree seeds — which will later be planted in the new Athletes' Park.

The world will also meet Soffia Corrêa, the 12-year-old rapper who performs as MC Soffia and whose catchy song "Menina Pretinha" — literally, "Nightshade Girl" — is about being proud of her black skin.

The show will culminate in a carnival that will celebrate the arrival of more than 11,000 athletes from more than 200 countries in the stadium.

The ceremony will begin at 7 p.m. EDT. We'll be live-blogging the ceremony here at The Torch. From start to finish, we're expecting the show to last around four hours.

NBC says its telecast will have a one-hour time delay, which it hopes will bring in more viewers during the evening hours.

But if you want to watch it live in English, you can try Canada's CBC or Britain's BBC. You can check out Spanish-language options such as Telemundo here (although it seems Telemundo will follow NBC's lead with a one-hour delay).

No Dorms For U.S. Basketball Teams; They'll Stay On A Cruise Ship In Rio

In the Parade of Nations, where the athletes walk through the stadium, the delegations will be announced in alphabetical order in Portuguese, Brazil's national language.

That means Team USA, with 555 athletes, will enter the stadium as Estados Unidos, placing the Americans toward the front half of the parade — right after Slovenia (Eslovênia), which sent 62 athletes, and Spain (Espanha), which sent 303.

While several new stadiums have been built for these games, the Opening Ceremony will be held in Rio's massive Maracana Stadium, a monument to sport that was built to host the World Cup back in 1950 (it was recently renovated).

Another director, Leonardo Caetano, says he wants the world to fall in love with Brazil on Friday night.

"We are very confident that we can do it," he told NPR's Lulu Garcia-Navarro.

A key samba dancer in the show, Rafaela Mel, told Lulu that the ceremony will be "full of surprises. It's going to be awesome."

Awesome surprises — the good kind — are what Rio needs. For months, its Olympic organizing committee has faced criticisms, setbacks and questions about the city's ability to put on an epic global event.

Rio will make its case by presenting Brazil's cultural gems for a television audience that's expected to number in the billions.

Brazil's deepening economic problems and its security concerns are evident by looking at what happened to the budget for the Opening Ceremony.

The original plan was to have $113.9 million to put on four shows — the opening and closing to both the Olympics and the Paralympics, which come next month. But organizers are now operating with roughly half that amount. And a big chunk is going to security.

While the budget is far less than he had hoped for, Meirelles says that it would be "pretty tacky to be overspending" in Brazil right now.

"When 40 percent of the homes in Brazil have no sanitation, you can't really be spending a billion reals for a show," he said. "In the end I feel good that I am not spending money that Brazil hasn't got. You can do something with heart, with concept, without spending."

That spirit of innovation is one of the show's themes. And that brings us back to the "no entrance" issue.

At Maracana Stadium, Meirelles says, "There is one door which is not big and four normal doors. So if you want to take something big in, you can't. We can't have any machinery, so we are doing it all on the ground."

This also means that all the thousands of athletes will have to share a few doors with hundreds of performers.

"It is impossible," Meirelles says. "The whole creative process has been dealing with how we go about taking people in and out."

We'll see how they've solved this challenge and whether they can change the mood of a country, where scattered protests are greeting the games.

Director Leonardo Caetano doesn't shy away from these challenges. He just sees it as another part of Brazil's story.

The show will be about "how the Brazilians do more with less," Caetano says. "How to be innovative. How to do things in a different way."