Accessibility links
Summer Olympics 2016: Controversy Grows In Rio Over Political Protests : The Torch Brazil is in the midst of a political crisis, but protests at Olympic venues have been shut down. The government is expected to appeal a judge's ruling that it is illegal to remove protesters.

Listen · 3:53 3:53
Controversy Grows In Rio Over Political Protests During Olympics 3:53 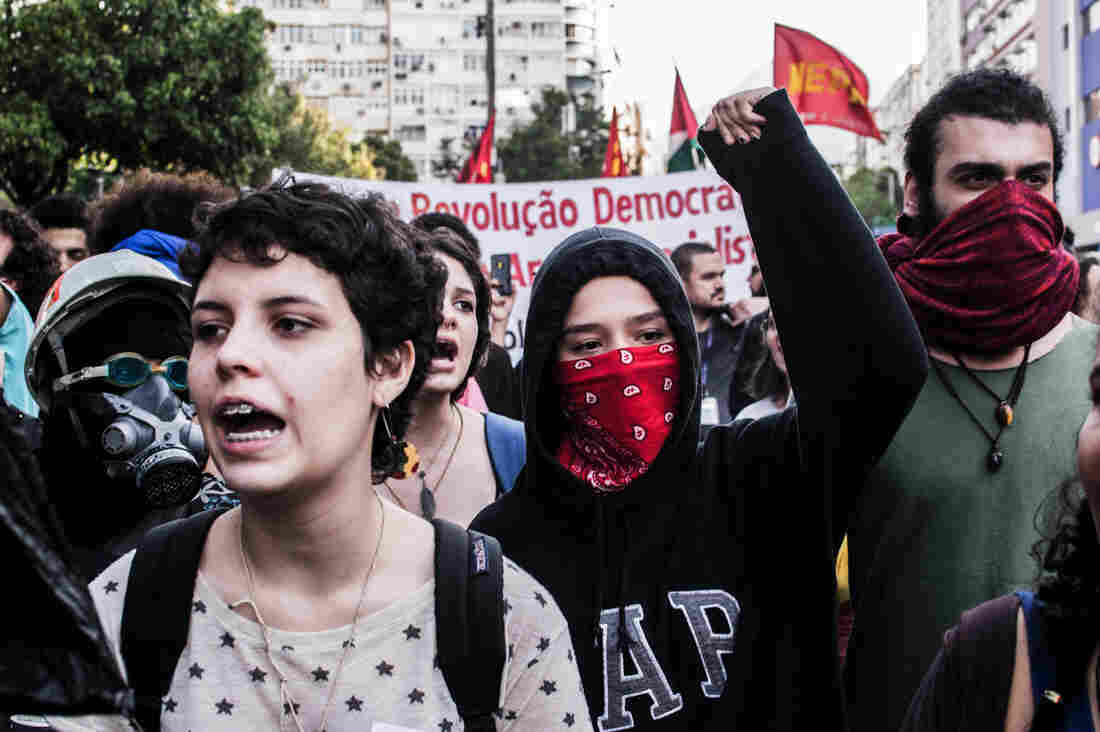 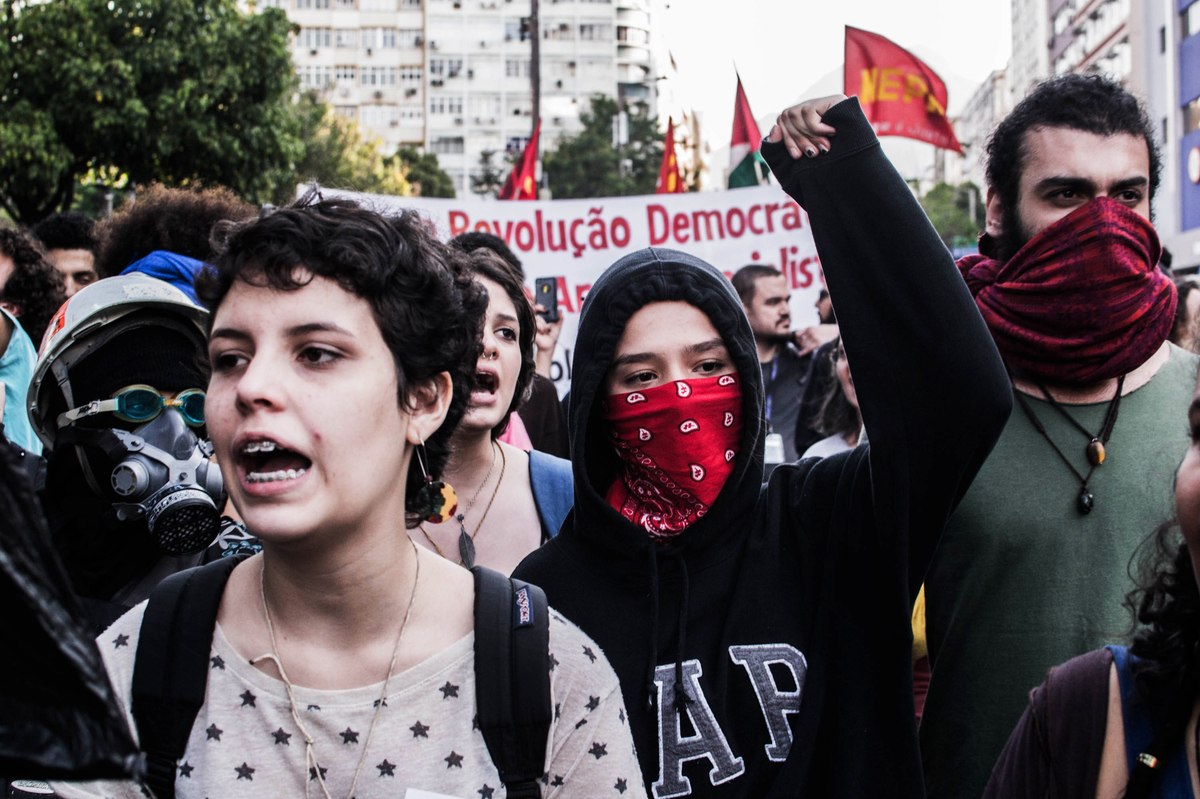 Protesters demonstrate against the Olympic Games in Rio de Janeiro on Aug. 5.

At Rio's Summer Games, there's plenty of drama inside the arenas — but it's not all about sport.

As is traditional for the host country's head of state, interim President Michel Temer declared the Rio 2016 Summer Olympics open for business on Aug. 5. But instead of cheers, the crowd erupted into boos. Music quickly swelled to mask the sound, but Brazilians, in the midst of a national political crisis, loudly made their dislike of him known.

This was only the first of several protests inside Olympic venues. Posts on social media went viral, showing people with tickets being forcibly removed by security — some simply for wearing shirts calling for Temer's ouster.

This is the context: Dilma Rousseff, Brazil's elected president, has been suspended and is awaiting an impeachment trial in the Senate for fiscal mismanagement. Her former vice president, the right-of-center Temer, is now heading the country. Polls show he is hugely unpopular. He's been pushing through austerity measures to reboot the country's tanking economy.

Rousseff has called the move to remove her a "coup" and refused to attend the opening ceremony of the Olympics she helped organize.

Although some Brazilians want to use the Olympic Games to highlight their grievances, both the International Olympic Committee and Brazil's government say political acts are not allowed inside the Olympic venues and have vowed to continue removing people who flout the rules.

"Freedom of speech is enshrined in the constitution, but these kinds of political protests cannot disturb the games," Alexandre de Moraes, Brazil's justice minister, said in a press conference Monday. "These events require extreme concentration and to have someone shouting is putting the games at risk."

Of course, in most venues, people are shouting and chanting throughout the competition anyway. Activists were also quick to note that most of the protests against Temer were silent, with people simply wearing shirts or holding up placards with slogans.

Ironically, this was also an issue during the World Cup in 2014, which Brazil also hosted. Back then, it was Dilma Rousseff who was facing protests, and her government passed a law to try to prohibit them inside venues. She was loudly booed anyway, but no one was removed from the stadiums for it. 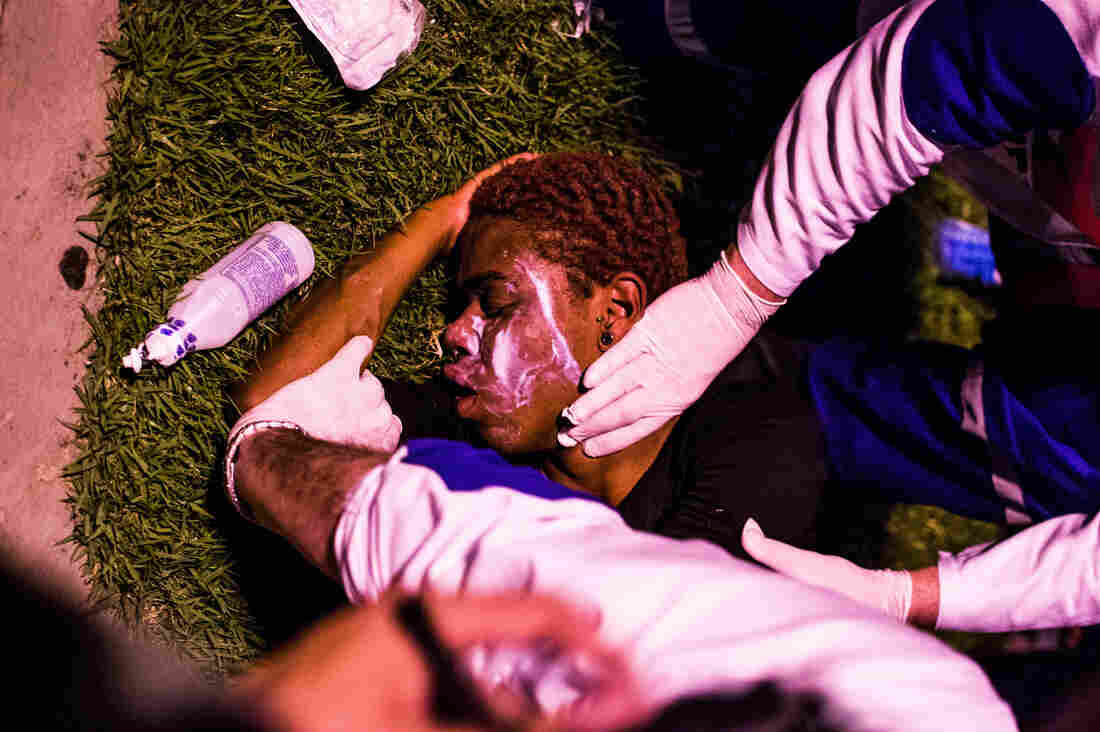 A protester receives medical attention after tear gas was used during a demonstration in Rio de Janeiro on Aug. 5. Joao Velozo for NPR hide caption 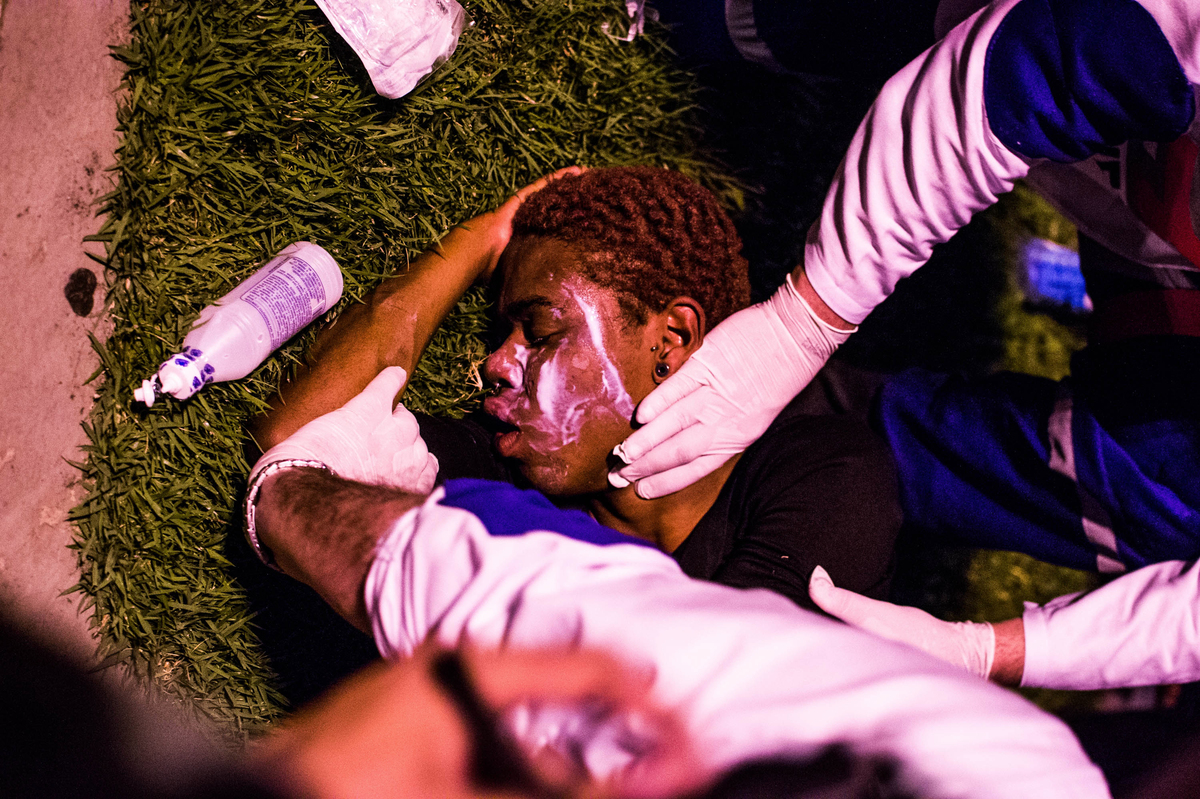 A protester receives medical attention after tear gas was used during a demonstration in Rio de Janeiro on Aug. 5.

In shutting down protests now, the government and the Olympic committee are acting unconstitutionally, says Eloisa Machado de Almeida, a professor of human rights law at the Getulio Vargas Foundation. She maintains all citizens have the right to protest by wearing shirts or holding up signs anywhere they want and says the current restrictions are violating Brazil's law.

"You can't use 'keeping harmony' inside the Olympic venues as a pretext for censorship in Brazil," she said.

A judge has agreed with her and ruled late Monday night that it is illegal for the IOC and the federal government to remove protesters. The government is expected to appeal.

Meanwhile, several Brazilian Olympic volunteers have resigned or complained, saying just because the Olympics are in town doesn't mean the rights granted by Brazil's constitution are suspended. This is a country with a long history of dictatorship, where dissent was criminalized. Freedom of speech is a cherished right.

But this isn't just about Brazil.

"What we do know is that every Olympics has some kind of protest," says Vida Bajc, a sociologist and author of Surveilling and Securing the Olympics, From Tokyo 1964 to London 2012 and Beyond. Protests occurred in the run-up to past Olympics in Mexico City, Turin, Barcelona and elsewhere, she says.

Even if what prompts the protests is different in every country, she says, the authorities' reaction is almost uniformly the same.

"The organizers will do what it takes to prevent disruption because the disruption tends to take away from the legacy that the event is supposed to have," she says. "Everything is done, whatever it takes."

Brazil is turning out to be no exception. At protests outside the venues right before the games, Brazilian police fired tear gas and rubber bullets.

But foreign intelligence services, international military advisers and trainers are all involved in securing the games, too, and their long-term impact can be enormous, Bajc says.

She says that may end up being the more insidious legacy of securing the games, and could help determine how protests are handled in Brazil long after the Olympic spotlight is gone.