Accessibility links
Michael Phelps Wins 25th Olympic Medal; He And Katie Ledecky Add To Gold Totals : The Torch Katie Ledecky won a gold medal in the women's 200-meter freestyle at Rio's Summer Olympics on Tuesday, in a race that was close — but not as close as the one Michael Phelps swam. 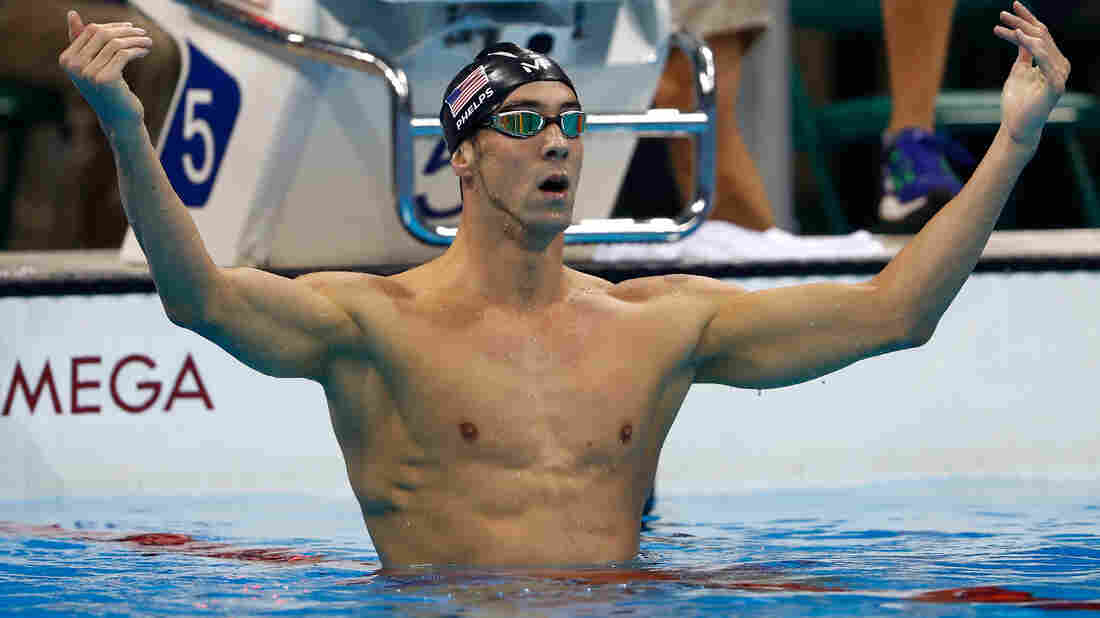 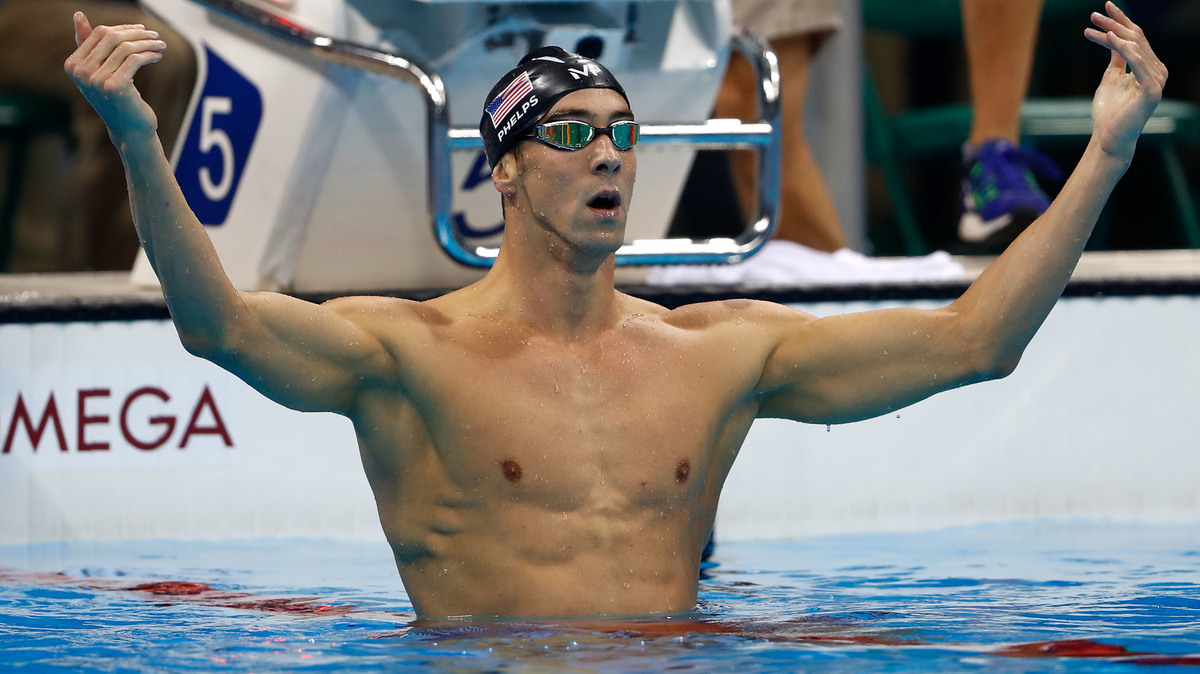 Michael Phelps celebrates winning his 20th gold medal after a razor-thin victory in the men's 200-meter butterfly at Rio's Summer Olympics on Tuesday.

Katie Ledecky won a gold medal in the women's 200-meter freestyle at the Summer Olympics on Tuesday, in a race that was close — but not as close as the one Michael Phelps swam in the 200-meter butterfly to win his 20th gold medal.

Both of the American swimmers came away from those races with their second gold medals from the Rio Games. Phelps later added a third, as part of the men's 4x200 freestyle relay, giving him 25 Olympic medals.

With their races, the two biggest stars of American swimming also answered questions about themselves in the most direct way an athlete can: in the field of play. Ledecky, 19, is often called the future of American swimming; Phelps has sometimes been seen as part of its past. Both of their performances in Rio support what Ledecky, who's now a two-time Olympian, said after her race: "I'm kind of the present, too." 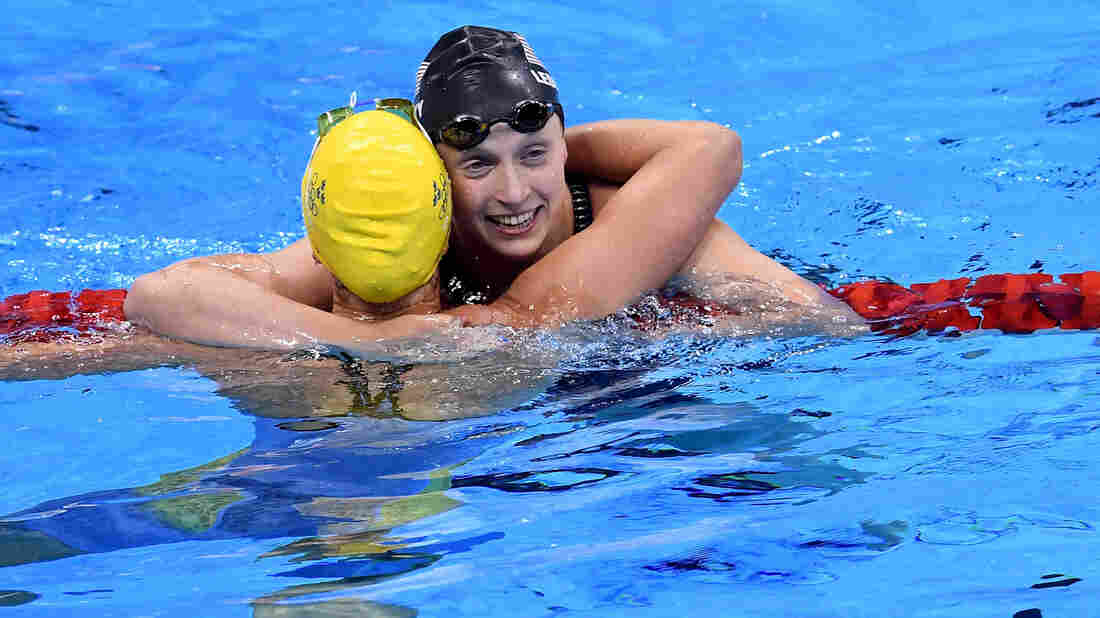 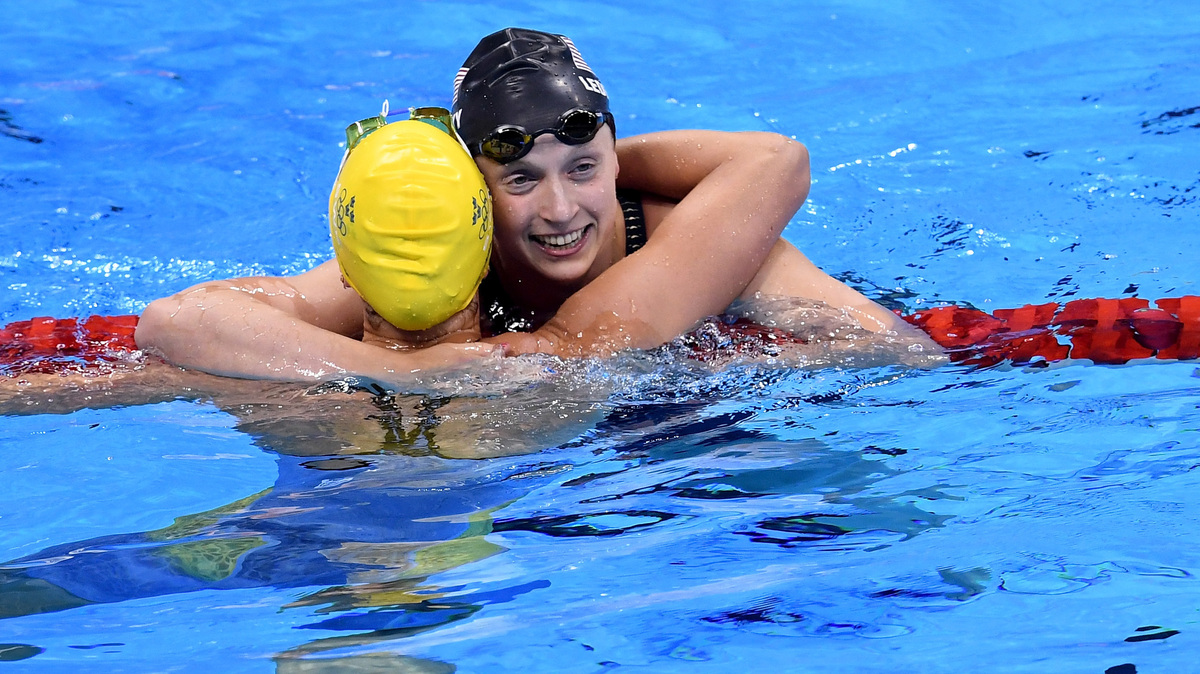 Celebrating an individual win that followed his erstwhile retirement after the London Games and a renewed quest for Olympic glory at age 31, Phelps held his arms out in the water and wiggled his fingers, asking the crowd to make noise — a request many had no trouble obliging, after watching him hold off a tough field for a thrilling win.

About an hour later, Phelps was back in the water again, anchoring the men's 4x200 freestyle relay in a race that was far from close, with the U.S. team — Conor Dwyer, Townley Haas, Ryan Lochte and Phelps — shaving 6 seconds off their qualifying time to finish at 7:00.66 — just 2 seconds off the world record. Great Britain took second, and Japan won bronze.

For Phelps, the only drama in the relay came when he split his swimming cap. A teammate helped him find a replacement.

Still, after swimming two races against world-class athletes, Phelps lingered at the pool's edge and ran his fingers across his throat in a cutting motion, seemingly saying, "I'm done."

In the women's freestyle race that kicked off the medal events in the late-night session at Rio's aquatic center, Ledecky edged Sweden's Sarah Sjostrom by 0.35 seconds with a finishing time of 1:53.73. The bronze medal went to Emma McKeon of Australia, at 1:54.92.

For Ledecky, the result almost qualifies as a photo finish; her speed has often appeared unmatchable at the longer distances in which she dominates. And she admitted that the effort took a toll.

"It really hurts," Ledecky later said. "That's the closest I've ever come to throwing up after a race."

Sjostrom, who faced off with Ledecky two days after winning her own gold medal in the 100-meter butterfly, pronounced herself content.

"It feels like gold that I'm after her," she said of Ledecky. "I couldn't have gone any faster, it's impossible."

For Phelps, who like many elite athletes is a creature of habit, much of what we saw him do tonight has become familiar — including two things that have been much-discussed in the past week: the red circles on his shoulders and back that result from the practice of cupping, and a (much) milder version of the hooded glare that reached new heights Monday.

But after his win in the butterfly, new wrinkles emerged. First there was the look on Phelps' face as he heard himself announced at the medals podium — a look that became more emotional as the crowd's cheers for him died away and the sound of the U.S. national anthem filled the Olympic Aquatics Stadium in Rio. He ended up taking what looked to be a very deep breath.

Then there was the laughter — evidently prompted by something Phelps saw in the stands — and, more unlike anything we've seen in his previous Summer Olympics, there was Phelps interrupting the victory walk he was taking with his rivals to climb the stairs of the photographers' station, where he reached his family and gave his infant son, Boomer, a kiss on the cheek. He then rejoined the other swimmers and posed for more photos, wearing a beaming smile.

For his butterfly final, Phelps was called to the starting blocks just moments after Ledecky's win. After a brief delay, he put on a riveting race, finishing with a time of 1:53.36.

The American led at the turn of the first 100 meters, showing the fluid form for which he's become famous. He seemed to add to his lead in the early part of the home stretch, but to preserve the win, he needed to hold off a late charge from Japan's Masato Sakai — who touched the wall just 0.04 seconds behind Phelps — and from Tamas Kenderesi of Hungary, who won a bronze medal with a time of 1:53.62.

Maya DiRado, who has already won a silver medal in the 400-meter individual medley in Rio, won bronze at the 200-meter length, in a race that saw Hungary's Katinka Hosszu set an Olympic record of 2:06.58. Siobhan-Marie O'Connor of Great Britain took silver.

After four days of competition in Rio, Team USA now has 26 medals, including 9 gold. China has the second-most medals, with 17.