Accessibility links
For Refugee Team, Just Being In Rio Is Like Winning Gold : The Torch The 10 athletes representing the first-ever refugee team received a stadium-rattling ovation at the opening ceremony. They hope to send a message about refugees that reaches far beyond the Rio Games. 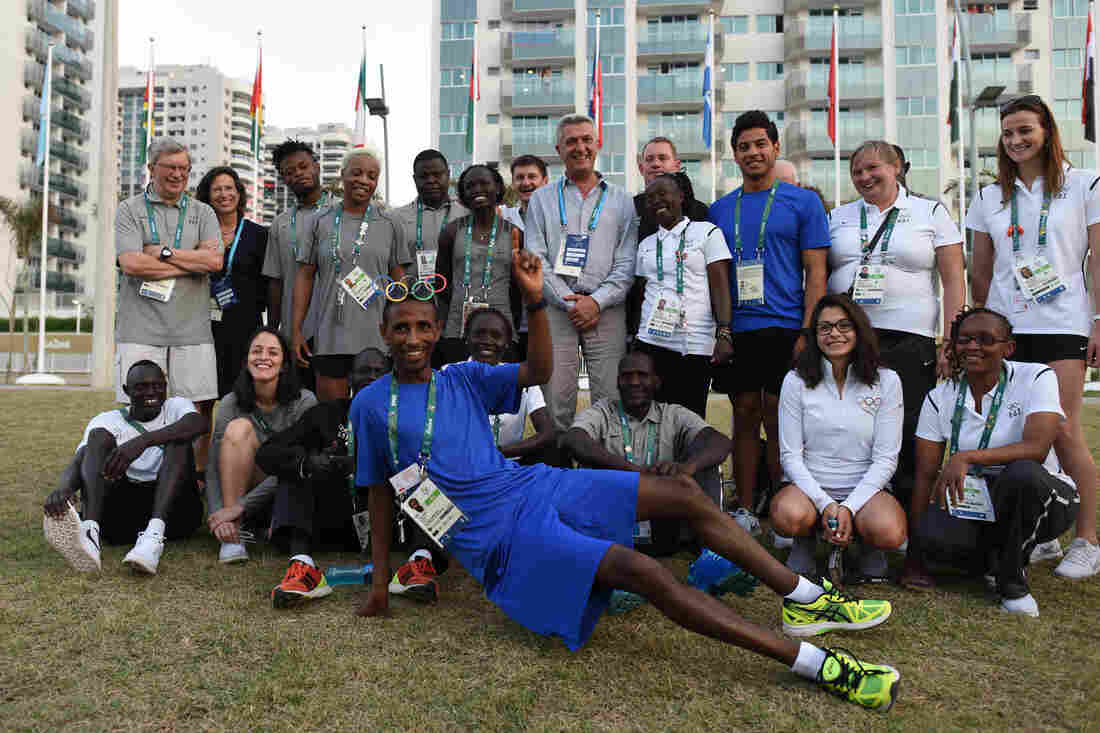 Members of the Refugee Olympic Team have their picture taken with United Nations High Commissioner for Refugees Filippo Grandi and UNHCR staff inside the Olympic Village. For the first time in Olympic history, the International Olympic Committee has created a team comprised of refugees competing as the Refugee Olympic Team. Benjamin Loyseau/UNHCR hide caption 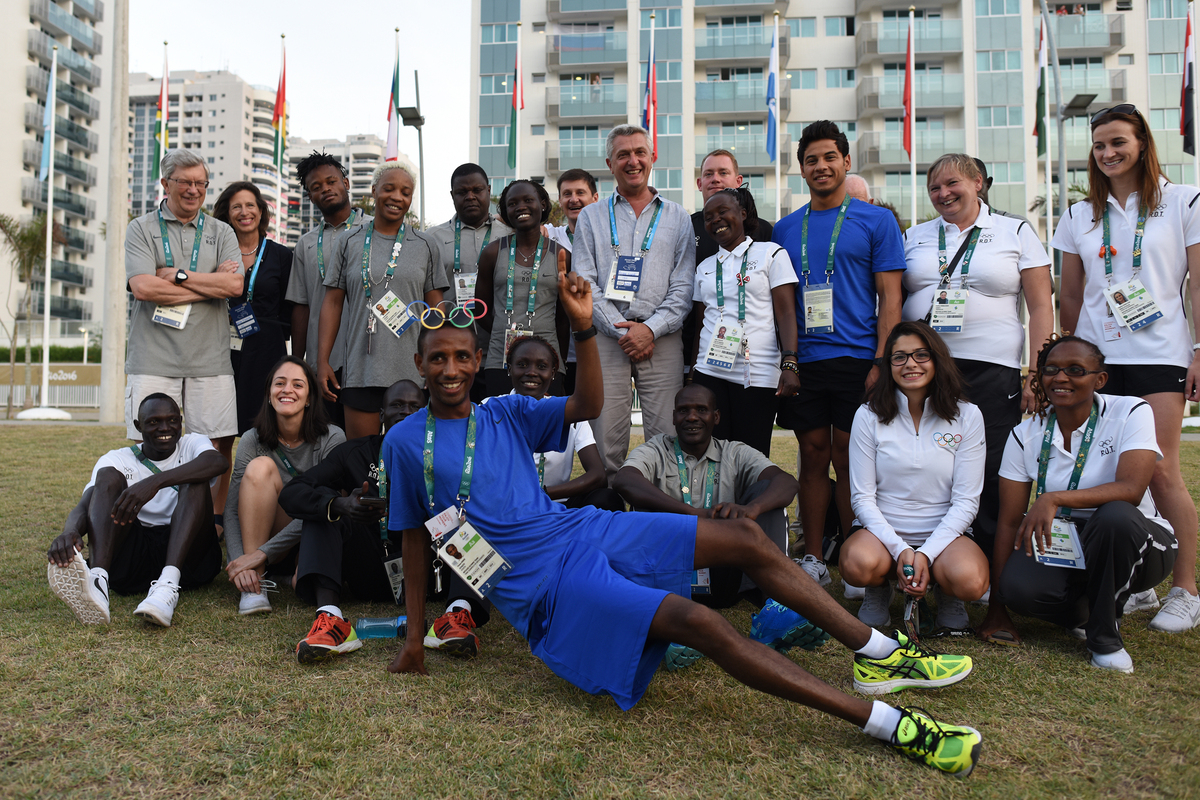 They come from Syria, South Sudan, Ethiopia and the Democratic Republic of the Congo.

Ten athletes who are refugees are competing on the first-ever Refugee Olympic Team at the Rio Games. They are representing the estimated 65 million people around the world who have been driven from their homes.

These athletes had to flee their homelands and make new lives elsewhere. Some are living in Europe. Some here in Brazil. Others in Kenya.

Some of them don't know if the families they left behind when they fled war are alive or dead.

But right now, these athletes are the toast of Rio.

They were greeted with a stadium-rattling standing ovation when they entered in the Parade of Nations at opening ceremonies Friday night, carrying the Olympic flag.

Among them: swimmer Rami Anis, 25, of Aleppo, Syria, who in 2011 fled that country's civil war for Turkey.

Four years later, he and his younger brother were smuggled in a raft across the Aegean to the Greek island of Samos. Ultimately, he made his way to Belgium, where he lives now.

Anis on Tuesday swam the 100-meter freestyle, but didn't advance out of the opening heat. 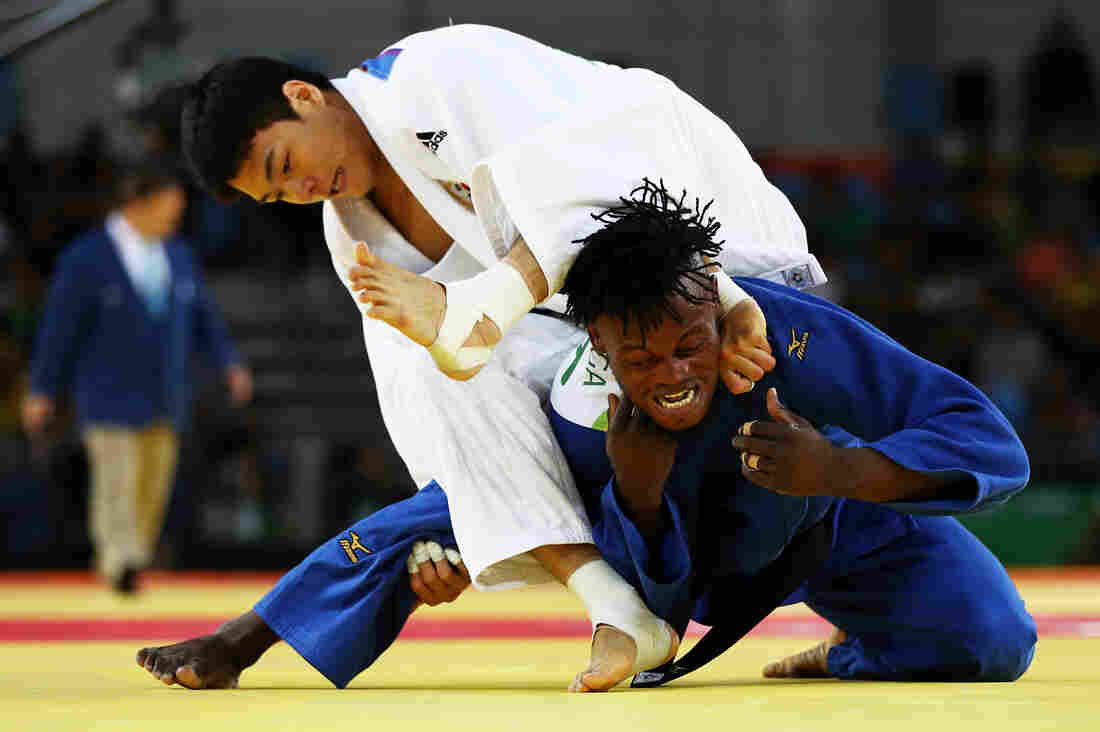 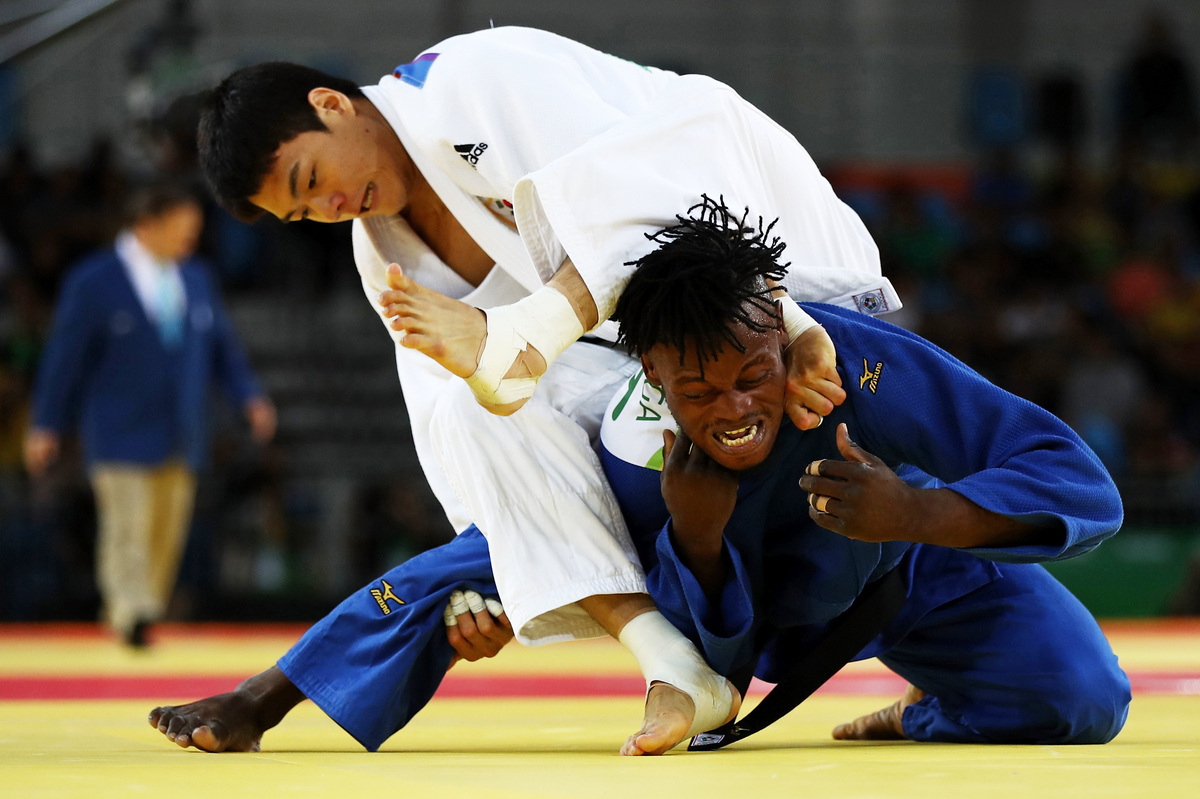 Donghan Gwak of Korea (left) competes against Popole Misenga of the Refugee Olympic Team during a men's 90kg bout on Wednesday in Rio.

"I feel really great," he said afterward. "It's a dream come true for me, and I don't want to wake up from this dream."

Dream-like though this experience may be, he still wishes he could be competing under the Syrian flag.

"Unfortunately, the war prevents us from competing in the name of our country," he said. "We hope that in the 2020 Games there will be no war, and we can participate under our own flag. There is nothing nearer and dearer to my heart than the homeland."

Anis will compete again, this time in the 100-meter butterfly, on Thursday.

His compatriot and fellow swimmer, Yusra Mardini, 18, tells a terrifying story about her own flight from Syria.

Last summer, she and her older sister Sarah climbed into an overcrowded inflatable dinghy in Izmir, Turkey, headed for the Greek island of Lesbos.

When the boat's motor stopped, Yusra and Sarah jumped overboard, along with another refugee, and for three hours, they swam with the boat, pulling it toward shore.

"I was thinking it would be a real shame if we drowned, because we are swimmers," Mardini said. "I hated the sea after that." 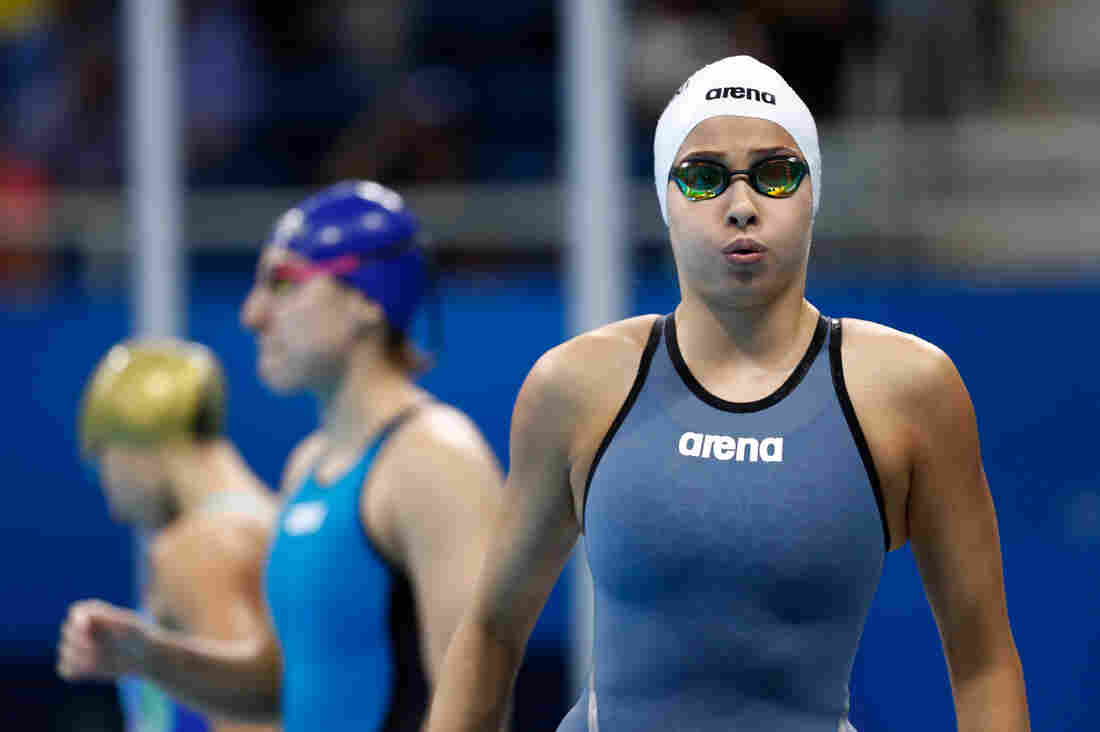 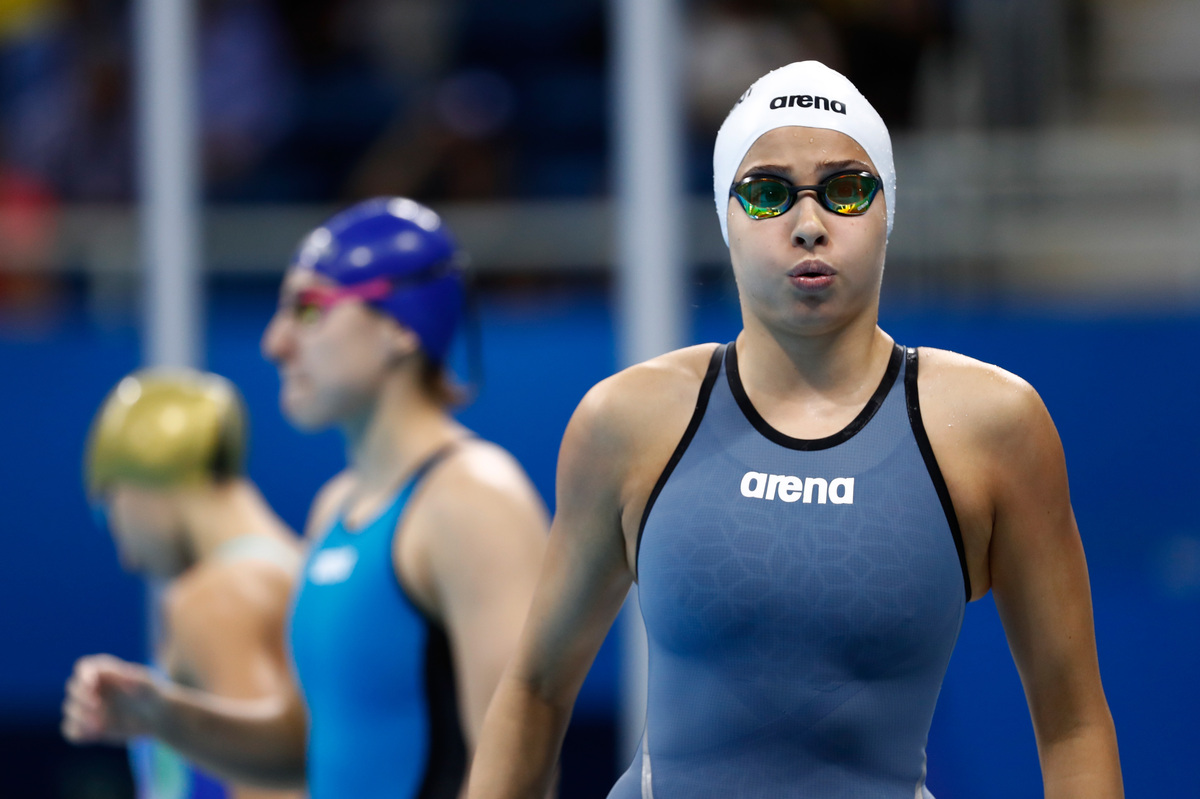 Yusra Mardini of the Refugee Olympic Team looks on in the women's swimming 100m freestyle heat at the Olympic Aquatics Stadium on Wednesday in Rio de Janeiro.

Mardini won her heat in the 100-meter butterfly on Saturday, but her time was not fast enough to qualify for the semifinal round. On Wednesday, she was unable to advance beyond the first heat of the 100-meter freestyle.

Rounding out the Olympic refugee team are two judokas originally from the Democratic Republic of the Congo, Popole Misenga and Yolande Bukasa Mabika, who now live in Brazil.

Both competed on Wednesday, but they were knocked out of medal contention.

Speaking at a news conference in Rio de Janeiro, Bukasa said, "We are here together and we are going to make unprecedented history. This is not just a struggle for sport, it's a struggle for life."

I spoke with the United Nations High Commissioner for Refugees, Filippo Grandi, who was here in Rio to meet with the refugee team. Here are highlights of our conversation.

Why this team? It's symbolic in so many ways.

You know, that was also my reaction when I first heard: Should we actually celebrate someone for being a refugee? One should ask this question. And I think this is not what we're celebrating here. That's not the message. Being a refugee is bad! Because you flee horrors, you flee war, you flee torture. So we don't want to celebrate that. We want to celebrate people reacting to that and rebuilding their lives.

A cynic who knows about the International Olympic Committee might say ... this is a way to look good in the international spotlight.

I really think that it's not up to me to comment on things that are not in the sphere of my work and on which I really don't know enough. In my conversations with the president of the IOC [Thomas Bach] — a person that I really respect — I had the sense that there was real, deep and strong commitment.

When you heard the deafening cheer that went up in Maracana Stadium when the refugee Olympic team walked in, what was that like for you?

Wow! That was amazing! You know, we always hear from politicians in Europe, in America, that we have to be very cautious with accepting migrants, refugees, because public opinion gets upset, has fears. Well I think that many of them have a huge responsibility in having created that fear, because that fear brings votes. And that's so irresponsible, because it creates also an atmosphere of xenophobia, of hatred, that gives license to very bad violence against people that seek refuge or seek better opportunities. Politicians, I hope that they will find more courage than they presently display to tackle these things in a more generous and open manner.