Accessibility links
U.S. Swimmers Dominate Rio Olympics In Exceptional Showing : The Torch Wins by Katie Ledecky and Michael Phelps have helped American swimmers dominate the competition in what is proving to be an exceptional Olympic showing. 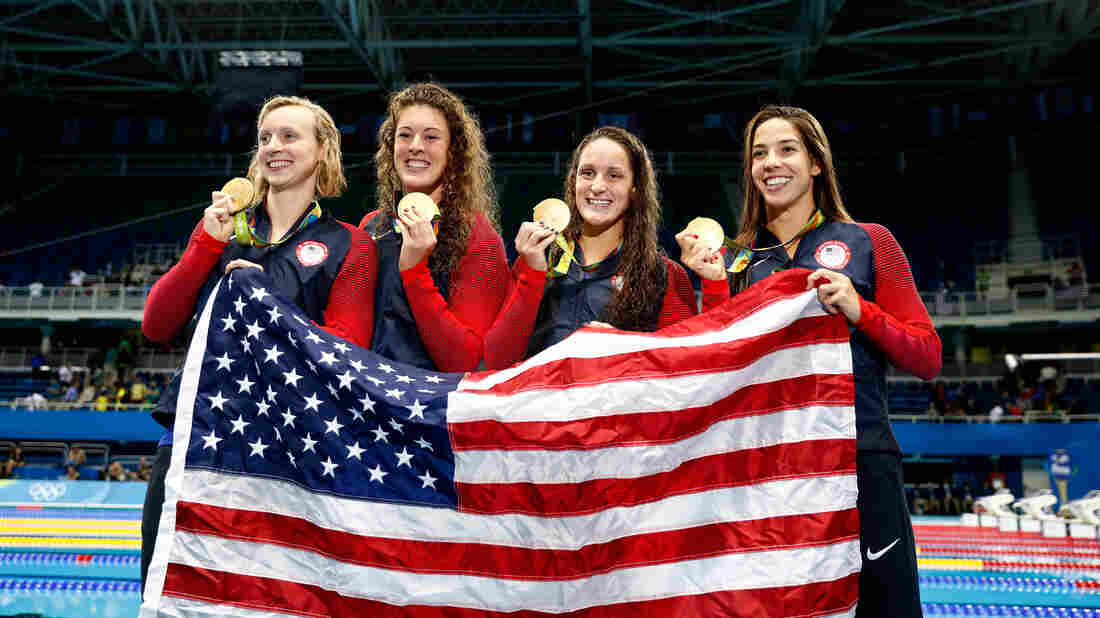 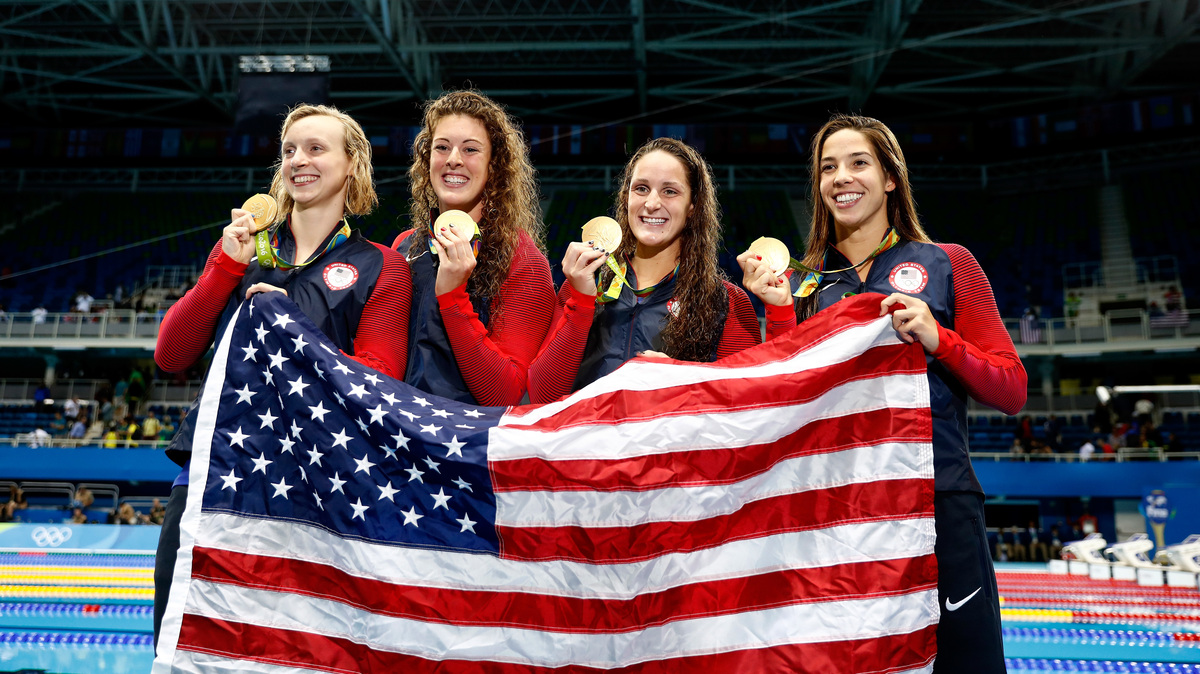 We've heard a lot about Michael Phelps and Katie Ledecky in this opening week of the Rio Olympics.

Together, they've won seven medals so far, six of them gold. But they're only part of the story about American swimming.

The U.S. traditionally has dominated the sport in the Olympics. The performance in Rio is proving to be exceptional.

A Lot Of Momentum

Phelps won his first gold medal of the Rio games in a scintillating relay race this past Sunday. It was the 4 x 100 meter freestyle relay. The atmosphere at the Olympic Aquatic Stadium was electric as Team U.S.A. held off rivals France and Australia to win the gold.

As Phelps finished talking to reporters and started to walk away, one person asked a last question – what will this victory do for the U.S. team's momentum?

Phelps looked back and said, "We have a lot of momentum right now."

And he was right. The relay gold that night was the eighth U.S. medal. And since his pronouncement, American swimmers have upped the total to 21. The most any other country has is seven.

While Phelps and Ledecky have been grabbing the headlines, other American swimmers have been pushing up the medal count. Like Maya DiRado, who won a bronze medal in the 200 meter individual medley Tuesday night. Or Leah Smith, who took the bronze in the 400 meter freestyle.

Phelp's longtime coach Bob Bowman is also the men's head coach in Rio. This week Bowman couldn't stop interrupting himself as he gushed about the entire U.S. team's depth.

"It's the whole team," Bowman said. "I mean c'mon, Ledecky? It's there everywhere. Townley [Haas] 44.1 on that relay? [Haas's 1.44.14 was the fastest individual split, or segment, in the entire field for the 4 x 200 meter freestyle relay.] I mean there's just a lot. [Ryan] Murphy last night? [Murphy set an Olympic record in his 100 meter backstroke victory.] There are tons of people. Lilly King [gold medalist in 100 meter breaststroke]. It just goes on and on and on."

Certainly Phelps and Ledecky are leading the way. 31-year-old Phelps in particular is serving a dual role – assassin in the pool and inspiration to his teammates.

His relay teammate Haas sure was thrilled.

"I know Michael's swim just got me pumped up," Haas said. "It was just awesome to watch that. It got me so ready to go. And I think we kind of feed off each other in that way."

The Plan Is Working

But there's more to the U.S. success. It goes back to the Olympic trials in Omaha, Neb., in late June and early July. A USA Swimming spokesman says having the trials then, roughly a month before the games rather than earlier in the spring, allows the athletes time to perform at trials, wind down and then back up, at two 10-day high-intensity training camps, in time for the Games.

In other words, the plan is to have the trials close to the Olympics, but not too close.

"We're swimming well," says coach Bob Bowman. "We're swimming a lot better than at trials, and that means our plan really worked and we spent a lot of time on that. So it's good."

A Record In Rio?

It's mostly been good for the U.S. through the years. It's won a third of all Olympic swimming medals ever awarded. Americans have won more swimming medals than any country in every Olympic games since 1988.

The record U.S. medal haul was 33 at the 2000 Sydney Olympics. With more than a dozen finals to go, and the chance to win multiple medals in those races, yet another American swimming record is in sight.