Accessibility links
USA Swimming Wants More Diversity In The Pool : The Torch The U.S. swimming team competing in Rio is the most diverse yet. But there is still a long way to go before the ranks of swimmers reflect the diversity of the country. 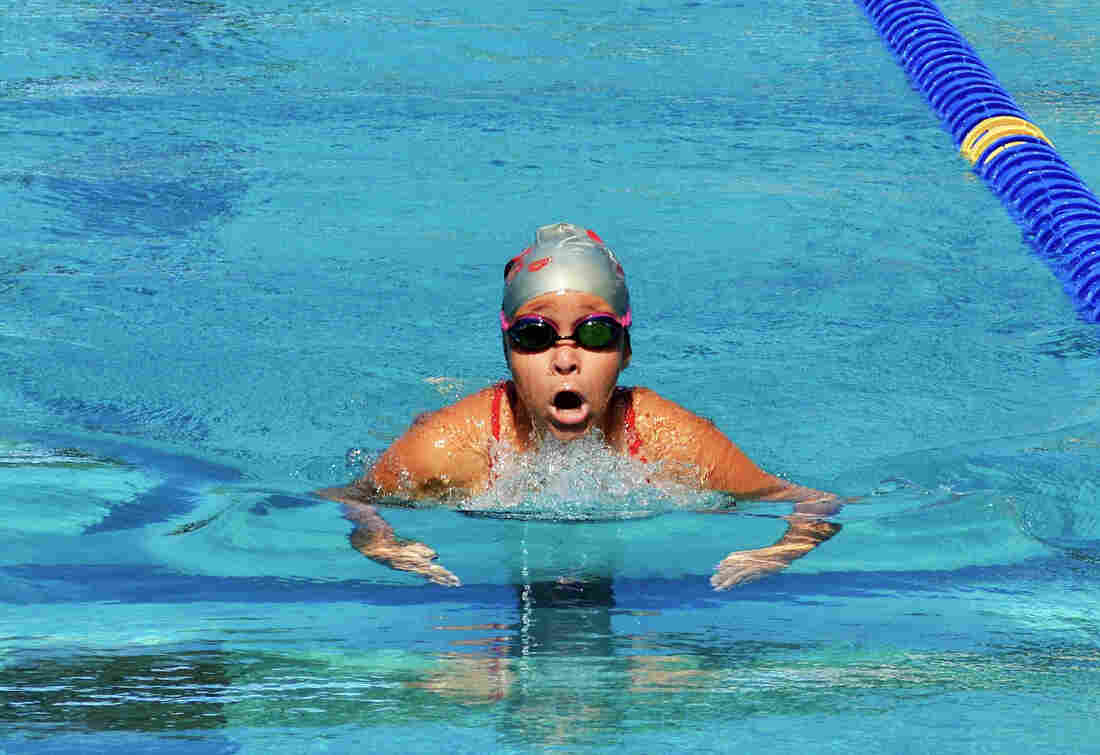 Emily Lopez-Diaz, 11, swims for the YMCA of South Florida Barracudas in the Miami area. Her father, Josue Lopez, estimates that about 30 percent of the team is Latino. Naomi Lopez hide caption 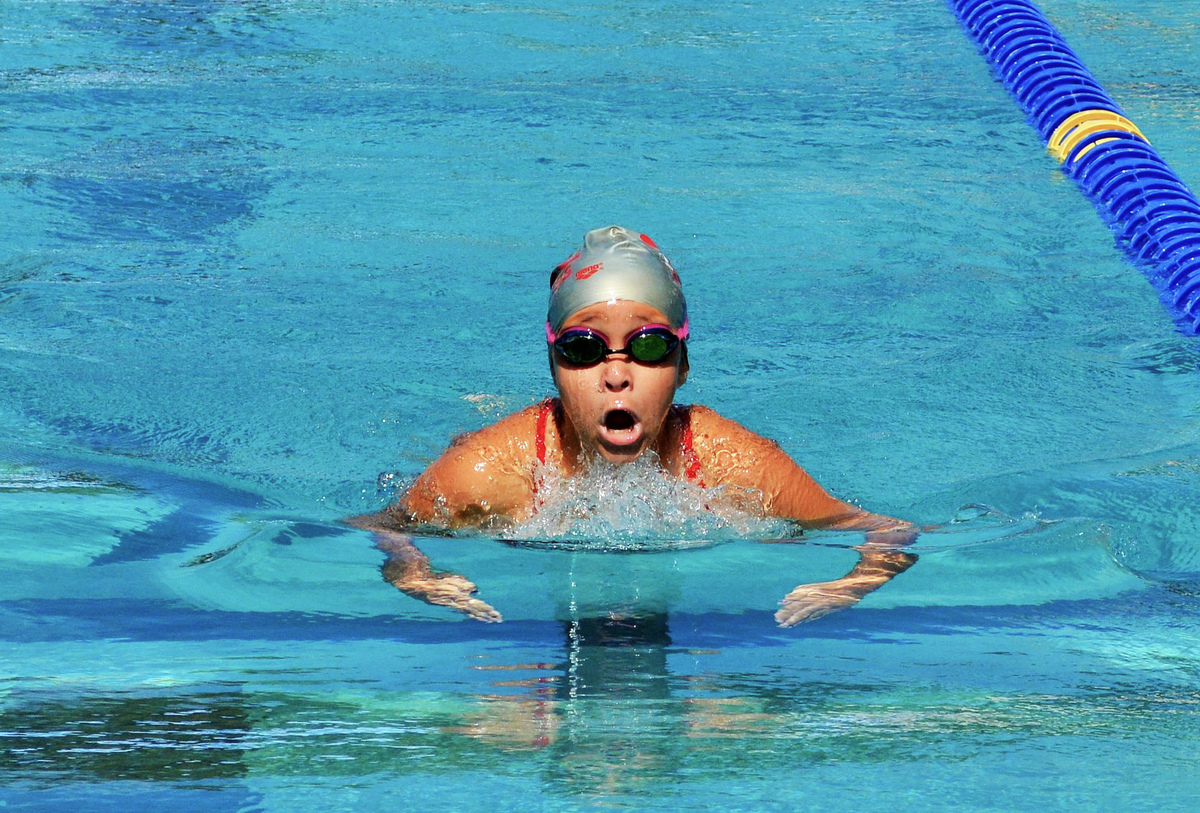 Emily Lopez-Diaz, 11, swims for the YMCA of South Florida Barracudas in the Miami area. Her father, Josue Lopez, estimates that about 30 percent of the team is Latino.

Juan Caraveo, a sports diversity and inclusion consultant for USA Swimming, points to Manuel, as well as Olympic swimmers Lia Neal and Anthony Ervin, who has won two golds in Rio, as evidence that a historically white-dominated sport is now beginning to draw from a wider base.

The U.S. Swim Team competing in Rio is the most diverse yet, he says. "But we still have a lot of work to do."

"We want the demographics of our sport to be reflective of that of the country," says Caraveo.

But to make that happen, he and USA Swimming must also succeed in encouraging another underrepresented group to join their sport: Latinos.

According to the USA Swimming Hispanic/Latino Cultural Inclusion Resource Guide, Hispanics and Latinos make up 17.4 percent of the U.S. population, but only 2.9 percent of the more than 300,000 athletes registered with USA Swimming.

Caraveo wants to see these numbers rise, in part for safety reasons. Swimming, he says, "is perhaps the only sport that can save your life." The group's resource guide reports that 10 people drown in the United States every day, but formal swim lessons can reduce the likelihood that a child will drown by 88 percent.

Caraveo and USA Swimming also have another motive in mind: more Olympic medals. By attracting more minorities, he says, "then we've increased our talent pool. Then we're not relying just on the Caucasian community ... . It's better from a competitive standpoint."

So Caraveo and USA Swimming are on a mission to identify the barriers to diversifying their sport and then break them down one by one. 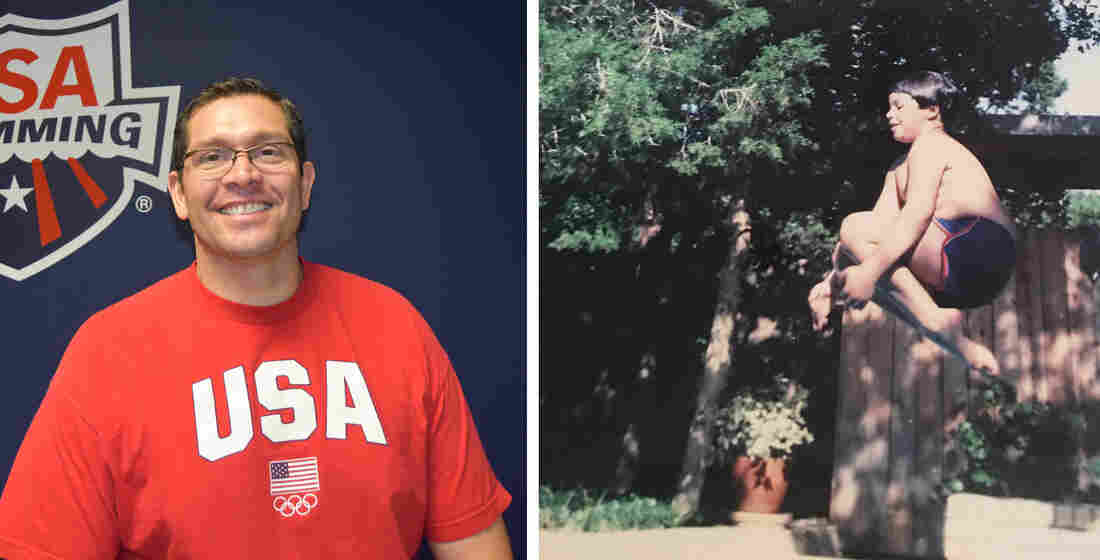 Juan Caraveo, a diversity consultant for USA Swimming, began swimming at an early age, encouraged by his parents. On the right, he was about age 7 when he was swimming in a city pool in Temple, Texas. Courtesy of Nicole Wilson/USA Swimming Foundation; Courtesy of Juan Caraveo hide caption 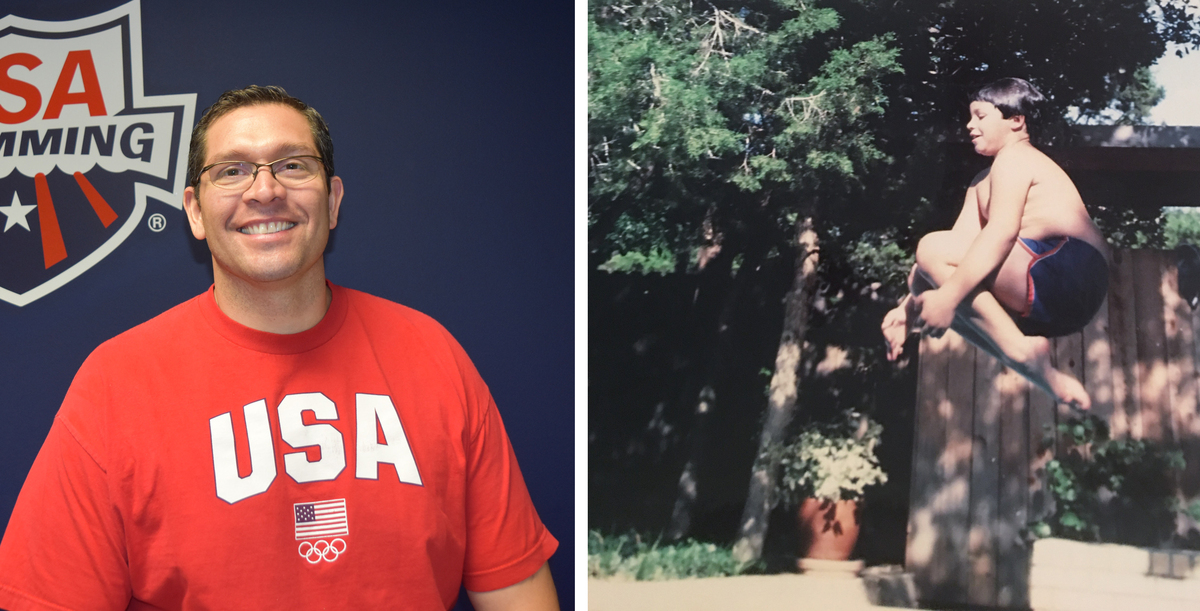 Juan Caraveo, a diversity consultant for USA Swimming, began swimming at an early age, encouraged by his parents. On the right, he was about age 7 when he was swimming in a city pool in Temple, Texas.

Cultivating A Culture Of Swimming

"My parents swim," says Caraveo. "My mom always felt that it is important for us to know how to swim and enjoy the water."

His parents, who both immigrated to the United States from Mexico, encouraged Caraveo's interest in the sport, but Caraveo recognizes that many children in Latino communities don't come from a culture of swimming. "Because the parents aren't swimming, the kids aren't swimming," he says.

Indeed, USA Swimming says that if a parent can't swim, there is only a 13 percent chance that a child will learn.

USA Swimming is trying to break that cycle. They have a multicultural team, which includes Caraveo, that is available to help local swim clubs find ways to reach out to different cultural groups.

"We work at the grassroots level," Caraveo explains. "We're having conversations with parents and grandparents in parks in the summer who are not utilizing pools."

One incentive Caraveo points to when speaking with reluctant parents is financial.

In Texas, he says, a high-schooler can make $8 an hour working at a fast food chain or mowing lawns.

"If you're a swim instructor or life guard, those jobs start out at $10 an hour," he says. "In urban areas, ... there is often a shortage of swim instructors and lifeguards because the kids in those communities aren't learning how to swim."

Some local swim clubs do succeed in drawing Hispanic swimmers. Eleven-year-old Emily Lopez-Diaz swims for the YMCA of South Florida Barracudas in the Miami area. Her father, Josue Lopez, estimates that about 30 percent of the team is Latino.

Lopez doesn't consider himself much of a swimmer, but that hasn't stopped him from becoming an integral part of his daughter's swimming community. 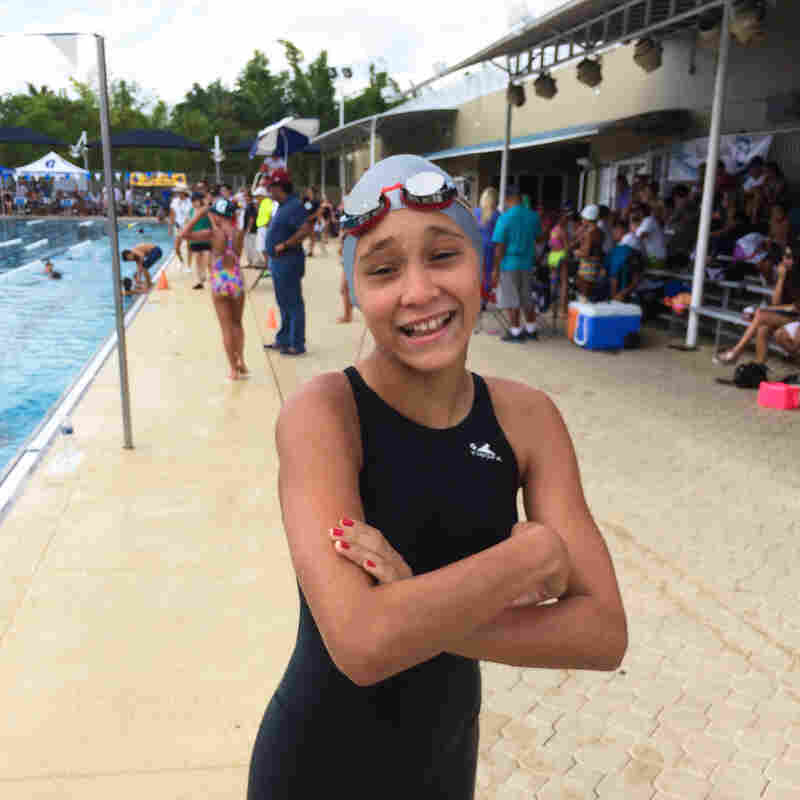 "I was surprised because I didn't really know that I was one of the best," says Emily Lopez-Diaz about winning a bronze medal in a regional competition last year. Naomi Lopez hide caption

"I get excited," he says. "Whenever she is swimming, I am cheering for her."

And his daughter is thriving. In a regional competition last year, Lopez-Diaz won a bronze medal for the 50-meter backstroke.

"I felt like I was really accomplished and I was proud of myself," Lopez-Diaz says. "I was surprised because I didn't really know that I was one of the best."

It may seem unsurprising that Miami, with its large Hispanic population, would have a swim team that succeeds in attracting a more diverse group of swimmers.

But there are other parts of the country where large Hispanic populations remain mostly separate from swimming culture.

According to Merari Chollette, the diversity chair of Potomac Valley Swimming around Washington, D.C., of 11,533 athletes swimming in clubs under the PVC umbrella, only 76 identified themselves as Hispanic. This, despite the fact that Hispanics make up 14 percent of the D.C. area population.

She knows that the true number of Latino swimmers is likely higher since many choose not to identify ethnicity on forms. But it is still far from where she would like it to be.

"We want every child to feel that this is a sport they can participate in," she says.

Chollette is finding that for some non-English speakers, language is a barrier — people are hesitant to become part of a community where they can't speak with others.

For some, the financial commitment may be a challenge. To address that barrier, Potomac Valley Swimming set up a grant program for this upcoming year.

"Training in this sport can be very expensive. It can cost as much as $1,500 to $4,000 a year for swim team fees in the Washington metropolitan area," says Chollette.

But she also says that swimmers shouldn't be discouraged by the financial hurdle. Some clubs like YMCAs charge significantly lower fees and many clubs have funding to offer scholarships and financial assistance.

All successful competitive swimmers have one thing in common: access to a pool as a kid.

The USA Swimming Foundation is making swimming more accessible through their Make a Splash Initiative. The program provides funding to local swim lesson-providers to raise awareness about water safety and offer swim instruction to children who otherwise couldn't afford it. More than 3.4 million children have received swim lessons through this program.

For children who want to take the next step and swim competitively, USA Swimming has an outreach program that offers need-based discounted memberships.

Helen Garcia began her swimming career at the age of 5 when her family moved to South Gate, Calif., from East Los Angeles. 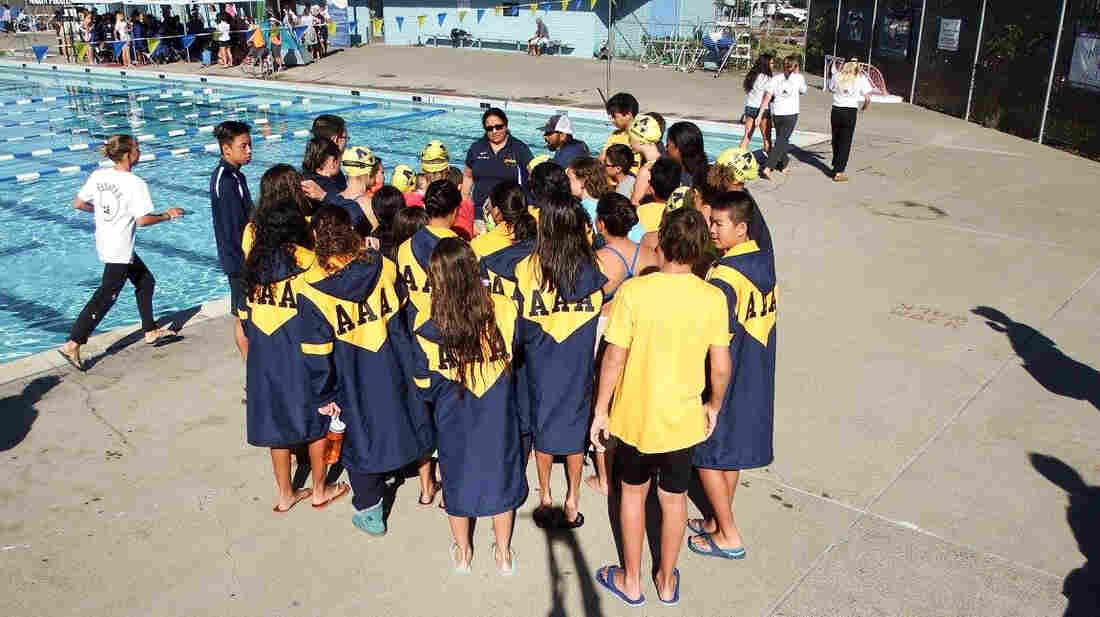 Helen Garcia is the head coach of Albany Armada Aquatics in Calif. Her parents encouraged her to swim as a child even though they didn't know how themselves. Berrin Yavuzer-Judd hide caption 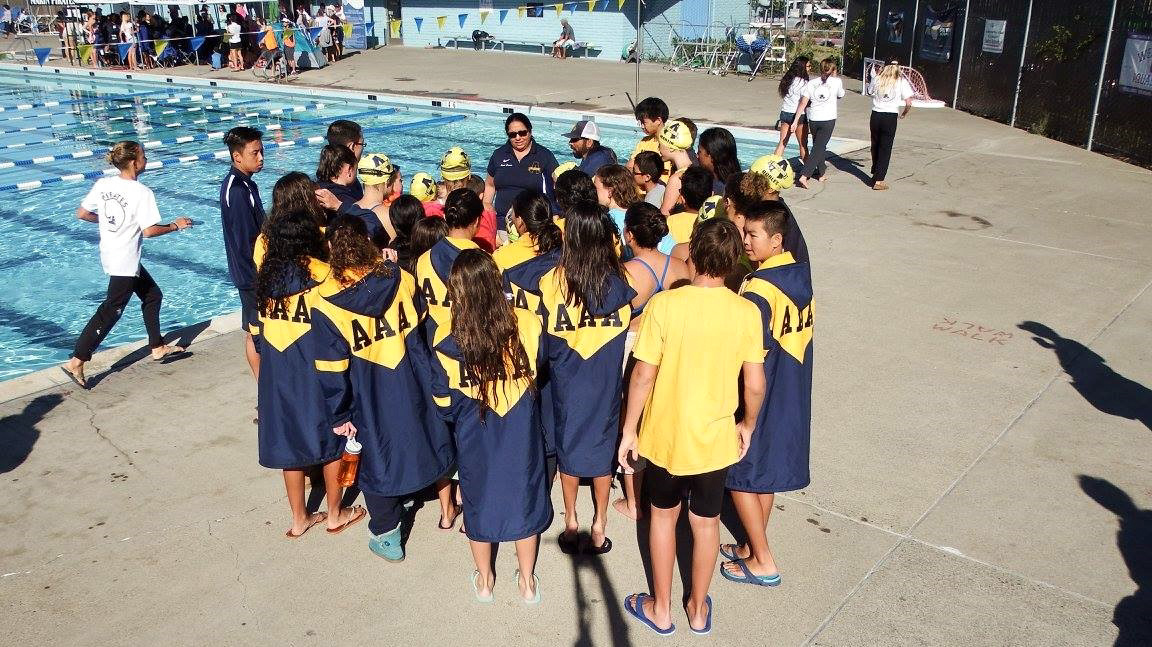 Helen Garcia is the head coach of Albany Armada Aquatics in Calif. Her parents encouraged her to swim as a child even though they didn't know how themselves.

Her parents, who grew up in Mexico, didn't know how to swim, although her father has since learned from watching Garcia and her three brothers.

There was a pool in their new neighborhood that offered affordable programming, so her father signed his children up for lessons.

Garcia feels lucky that her family happened to move near a pool. "There aren't a whole lot of indoor 50-meter pools out here," she says.

She also feels lucky that she happened to fall into an elite swimming program. When she was 12, her local team merged with another that was more competitive. In the first week, her new coach said that he saw her going to Junior Nationals in a year.

"I didn't even know what that was," she says. "There was a whole other level of swimming that I hadn't even tapped into."

Garcia did go on to compete at Junior Nationals at 13 and again at 14, when she broke the record in the 200-meter breaststroke. She later progressed to Senior Nationals and earned a scholarship to swim for the University of California, Berkeley.

Garcia is now the head coach of Albany Armada Aquatics in Albany, Calif., and owner of Helen's Happy Swim School in Oakland, Calif.

As she progressed in competitive swimming, most of her teammates were white. Now she's a member of the coaching community, which is also predominantly white.

USA Swimming has a mentoring program that helps coaches from or serving underrepresented groups to strengthen their coaching skills.

Caraveo is Garcia's mentor. He has visited her team and worked with her to troubleshoot training challenges.

"Just to see his enthusiasm about our team was just so wonderful," she says. "It's amazing to have that kind of mentorship and guidance." 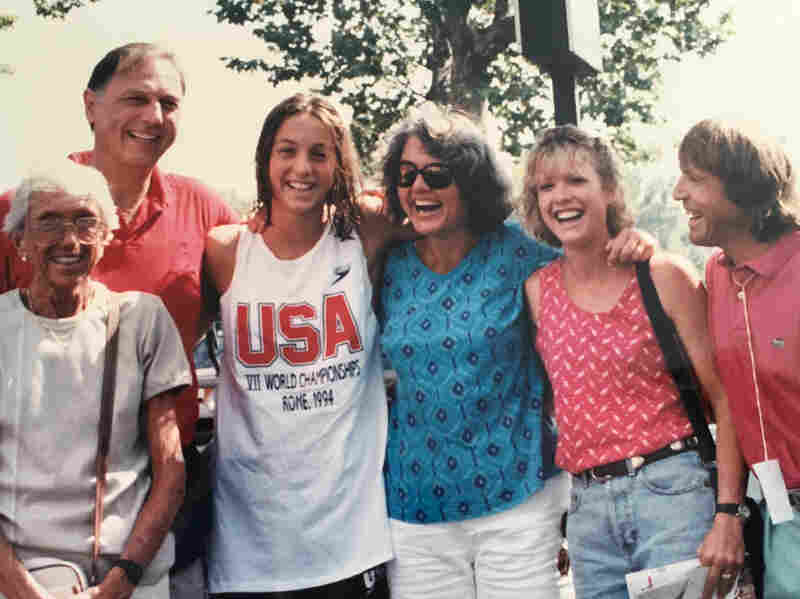 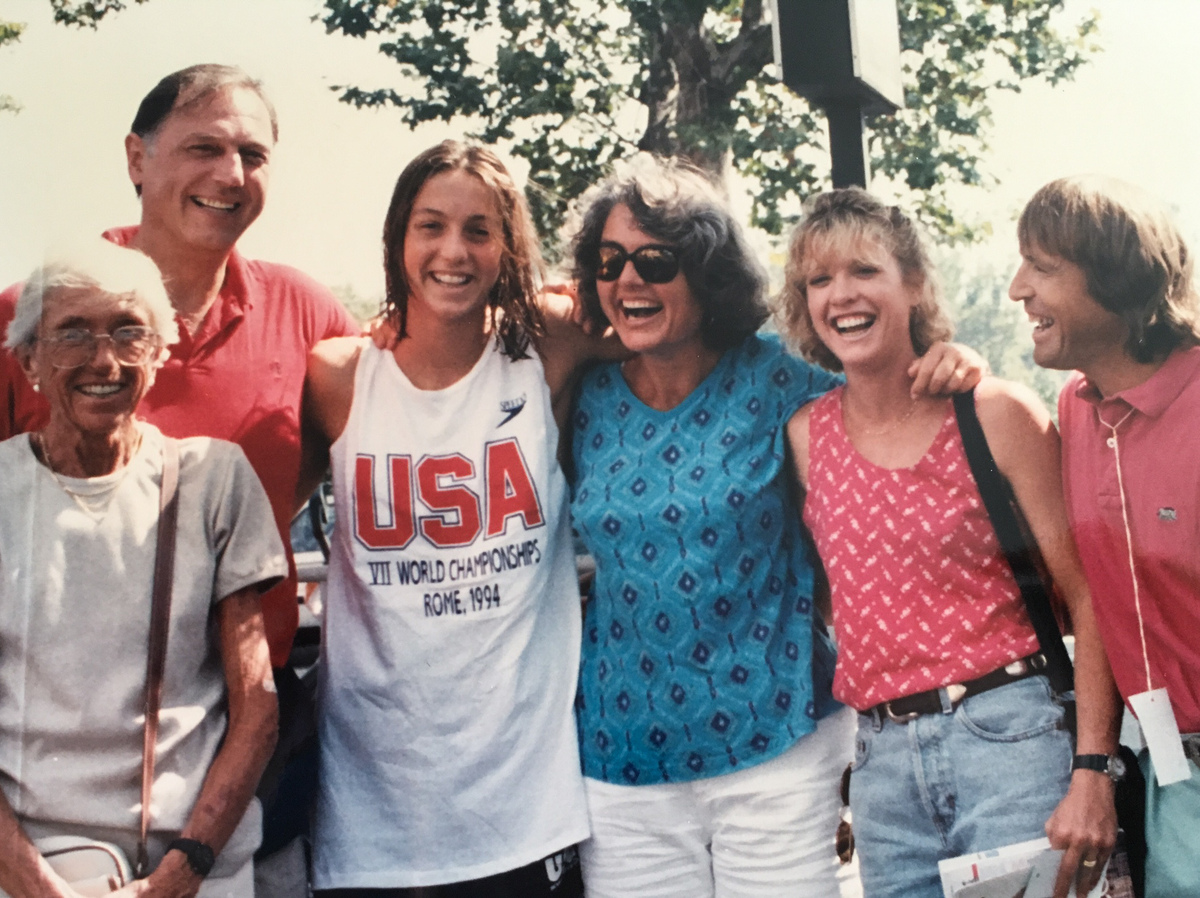 Swimmer Cristina Teuscher Fabbri (third from left) with her family and coach John Collins (right) at the 1994 World Championships in Rome.

"[Young swimmers] need to see somebody like them. A star. Somebody they can relate to," says Caraveo. "When I was growing up, it was Pablo Morales, a gold medalist. His family was from Cuba. For me, it was that his last name was Morales, and I could identify with that."

Another athlete who has served in that role is Cristina Teuscher Fabbri. She won gold at the 1996 Olympics in the 4x200 meter freestyle relay and bronze at the 2000 Olympics in the 200-meter individual medley.

Teuscher Fabbri, whose parents are from Argentina, grew up in New Rochelle, N.Y., with Spanish as her first language.

"I just took to swimming at an early age," she says. "When I was a baby and fussy, my mom would stick me in the kitchen sink with water. It's just something that calmed me."

She didn't have Latina swimming role models growing up. Her heroes were Janet Evans and Summer Sanders. "You identify with the part of yourself that's like [them]," she says. "For me, I was born in this country, I swam with this team, I represented the United States."

And so on some level, Teuscher Fabbri didn't miss having Latina swimmers to look up to. "Someone doesn't have to be your same skin color to be a role model," she says.

But she also wonders whether the lack of other Latina swimmers in her world made it harder for her to embrace the strengths that she associates with her Latina identity.

"My strength was laughing and connecting with people when I got up on a block. I didn't do that at first," she says. "I was trying to be what I thought a tough American swimmer was supposed to be."

Looking back, she thinks John Collins, the coach who brought her to the Olympics, would have understood her better if there were more Latinos on the team. His coaching style was tough. When she first started swimming for him, he told her they couldn't be friends.

"But whatever," she says. "We took him into my family. That's just the Latino way."