Accessibility links
Biles Wins Gold, Raisman Silver, In A Duel For Their Last Medals In Rio: Live Blog : The Torch Americans Simone Biles and Aly Raisman are the first U.S. gymnasts in history to win gold and silver in the women's floor exercise at Rio's Summer Olympics.

Biles Wins Gold, Raisman Silver, In A Duel For Their Last Medals In Rio: Live Blog

Biles Wins Gold, Raisman Silver, In A Duel For Their Last Medals In Rio: Live Blog 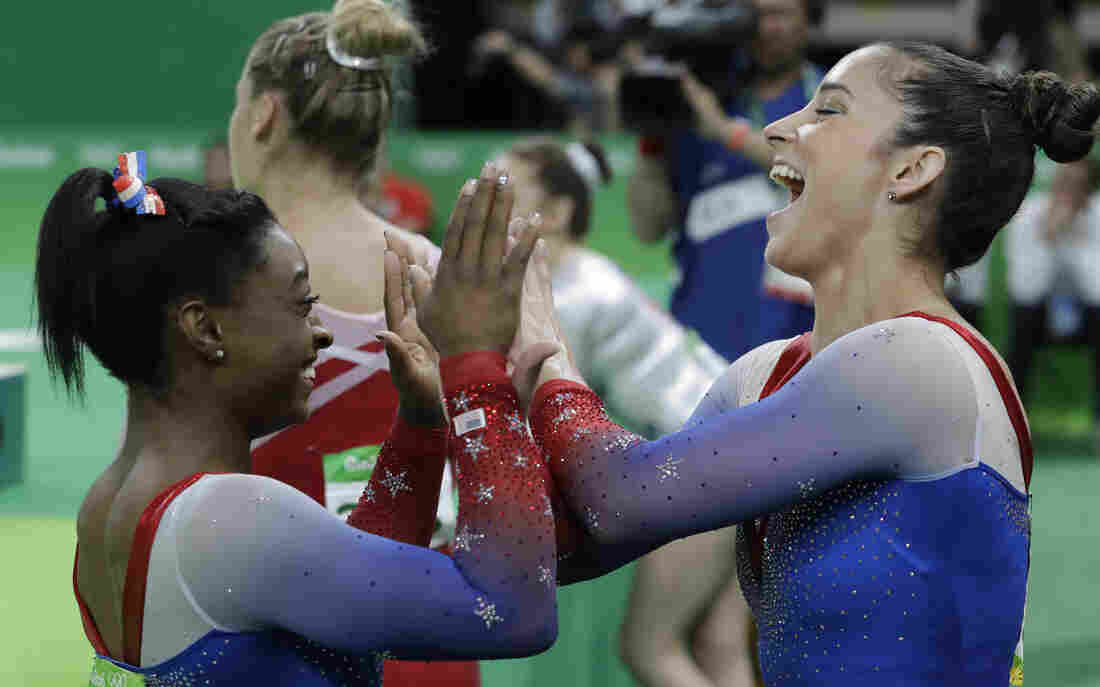 U.S. teammates, Simone Biles, who won the gold, and Aly Raisman, who won the silver, celebrate after final results for floor routine on Tuesday in Rio. It ws the fourth gold medal for Biles. Rebecca Blackwell/AP hide caption 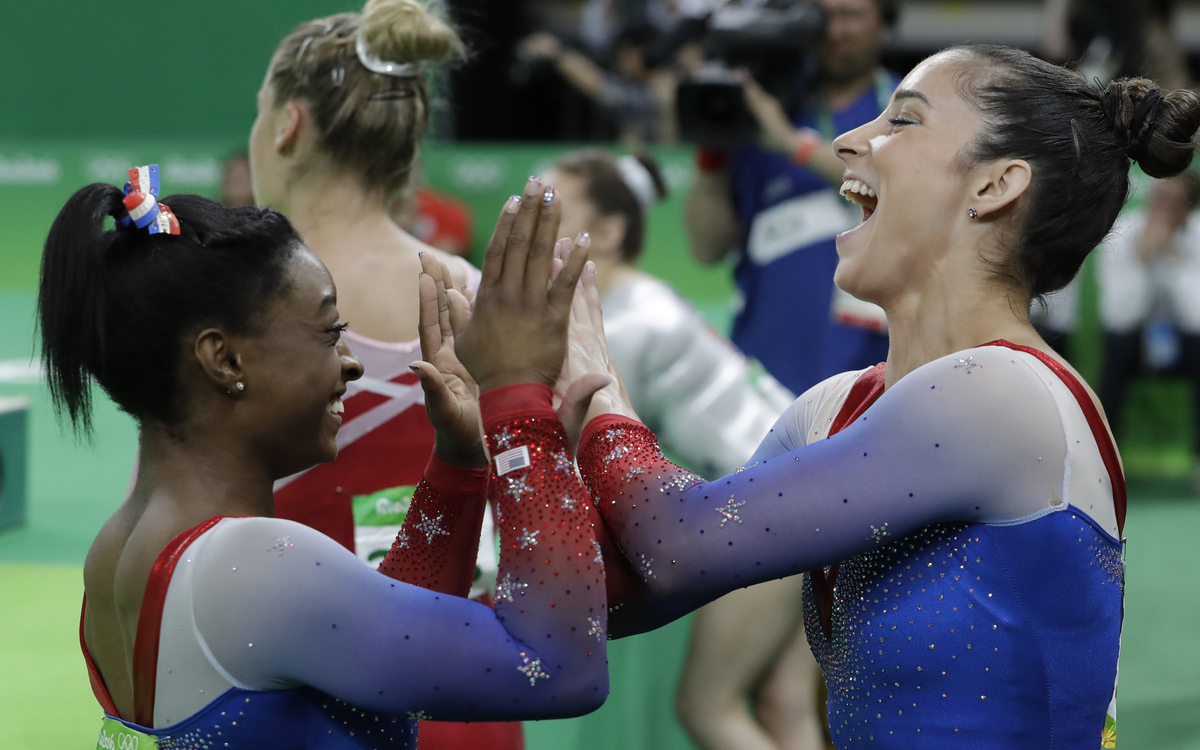 U.S. teammates, Simone Biles, who won the gold, and Aly Raisman, who won the silver, celebrate after final results for floor routine on Tuesday in Rio. It ws the fourth gold medal for Biles.

Americans Simone Biles and Aly Raisman became the first U.S. gymnasts to win gold and silver in the women's floor exercise Tuesday, beating out six other elite gymnasts to put an exclamation mark on a stellar Summer Olympics in Rio.

"I'm a little bit relieved because it's been a long journey," Biles said after winning the final women's event in Rio.

She's enjoyed all of her time in Rio, Biles said, but she also admitted to being a little worn out.

"When I was walking up [to the floor exercise area] my legs felt like rocks, but I've done floor routines like that before so I wasn't nervous about it," she said.

Biles won her fourth gold medal of these games — a record for an American female gymnast. And while Raisman missed repeating the gold she won in this discipline at the 2012 London Games, she can be consoled with a silver — which makes her the first U.S. female gymnast to win an individual medal in consecutive Olympics since Shannon Miller did it in 1992 and 1996.

Both Biles and Raisman spoke about being tired. But both also said they've had a lot of fun here in Rio.

"I can't remember the last time I actually genuinely enjoyed gymnastics this much, so it's been really nice," Raisman said after the event. Referring to the retiring Marta Karolyi, she added, "We're Marta's final group, so I think that we couldn't have finished it on a better note."

Speaking to the media after the event, Biles said that she wasn't disappointed to have one bronze mixed in among her four gold medals. The only people who might be disappointed, she said, were the media.

"It's very crazy. To think what I've done, its been an amazing experience and I don't think I could be more proud of myself," she said. "Your first Olympics you walk away with five medals, that's not tough at all. Especially four being gold, that's just unheard of. I'm very proud."

It's the sixth Olympic medal for Raisman, 22, putting her second only to Miller.

The Rio Olympics have been good to the U.S. gymnastics team: With five medals in one Olympics, Biles is now tied with swimmers Katie Ledecky and Missy Franklin for the most medals won by an American woman at one Olympics.

And with Danell Leyva winning two silver medals Tuesday — one for the parallel bars, and then another on the high bar — the U.S. team finishes these games with 12 medals, the most ever for the men and women combined.

As Raisman and Biles made their way around the media room following their triumph, they dropped everything twice, to watch their male teammates compete, and to celebrate another medal on an extraordinary trip to Brazil.

Here's the start list for the women's final on the floor exercise:

Like Biles, Raisman starts off her routine with smoothness that belies the intricacy of what she's doing. She's soaring, and landing her jumps cleanly. The crowd's already clapping along, and then she nails a backward double flip in the layout position. Same for her double pike that ended the routine.

Her final pass is barely over before the crowd explodes with applause.

Score: 15.500 — putting her into silver. Biles is still in gold — and one gymnast remains.

Steingruber, 22, gets off to a nice start but then lands a bit awkwardly after one of her passes. She takes a large pace forward to steady herself. At the end, the crowd is clapping to her music, encouraging her.

Final score for Steingruber is 11.800, leaving her well off the podium; she had qualified with a 14.666. Biles is assured of at least a medal — now Raisman and Ferrari will have their say. 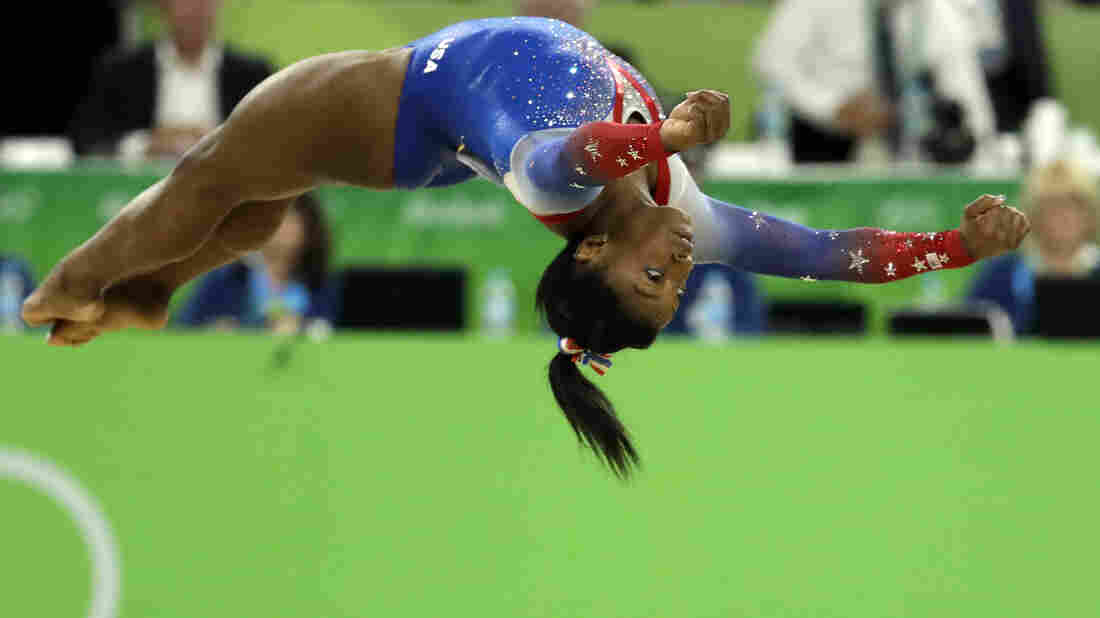 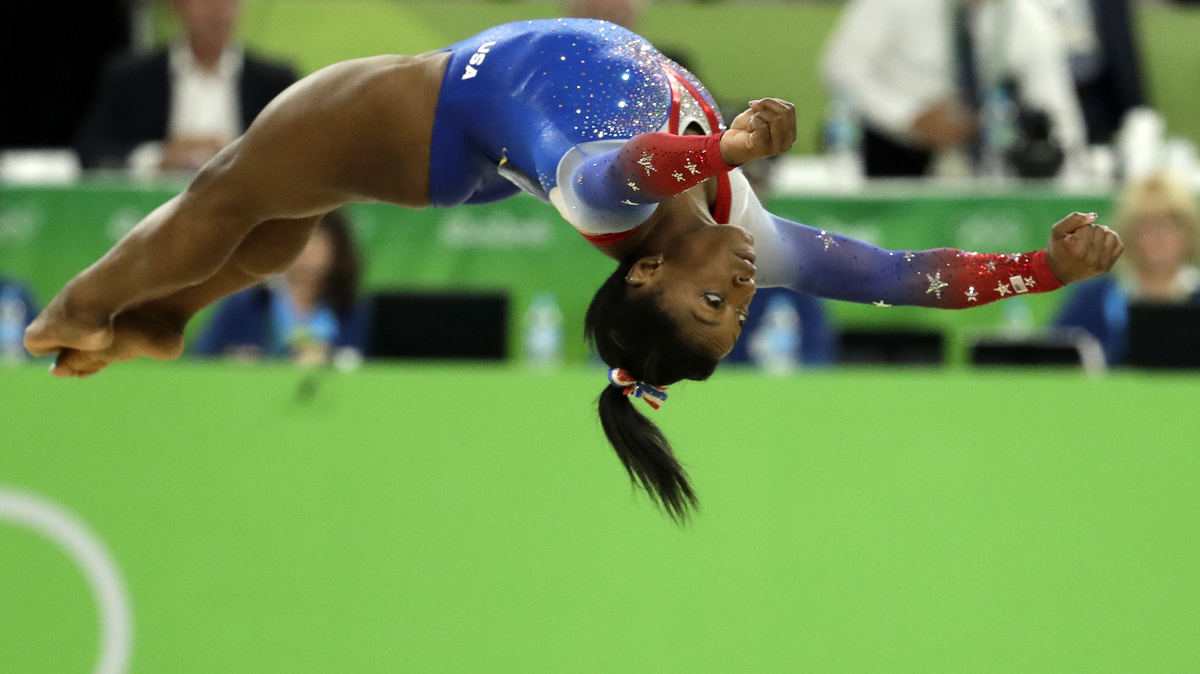 Biles performs on the floor exercise.

Biles, 19, is back on her game after a subpar (for her) balance beam routine yesterday. She is elevating to heights that let her perform twisting flips that end with her feet planted straight into the floor.

Her routine had plenty of Brazilian music — and her score is a 15.966, putting her into the lead.

Now she's dancing a bit — we saw a little hop on one of her landings, but otherwise, this has been an assured and captivating routine.

The crowd is appreciative. Tinkler got a 14.600 in qualifying. Her routine today gets her a 14.933 — putting her in the lead above Wang.

We'll note that Tinkler full-on clasped her hands together and placed them on her chest as she looked hopefully at the screen.

Fasana, 20, performs a graceful routine that lacks some of the fireworks Wang displayed — but then she nails her final pass and sends the crowd into a tizzy.

Wang Yan, 16, has it dialed in from the start of her routine. She's landing twisting flips at the end of her passes, and often connecting them into an additional move. The crowd loves it.

On her final pass, Wang takes a small hop backward. She qualified with a 14.666 — and she repeats it today, taking the lead with two gymnasts now finished.

Murakami, 19, immediately makes an impression on the crowd, with a graceful start to her floor exercise. She goes on to perform a smooth routine. She qualified for this final with a score of 14.566. Her final score today 14.533.

All of the athletes get a nice warm round of applause when their names are called out. For Biles, it's near deafening. The audience has appreciated her all week.

In a previous version of this post, we incorrectly said one of the medals Simone Biles won was silver. It was actually bronze.