Accessibility links
'There Was No Robbery,' Rio Police Chief Says Of Lochte's Holdup Claims : The Torch A day after police pulled two of Ryan Lochte's teammates off a U.S.-bound plane to discuss their alleged robbery, police say the swimmers admit the story was a fabrication. 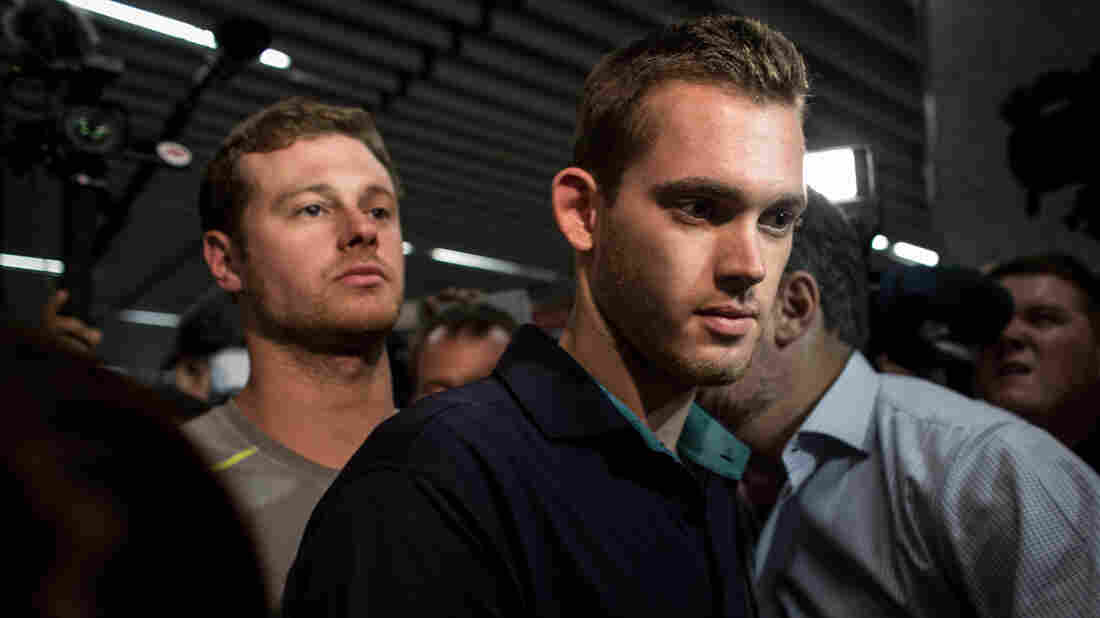 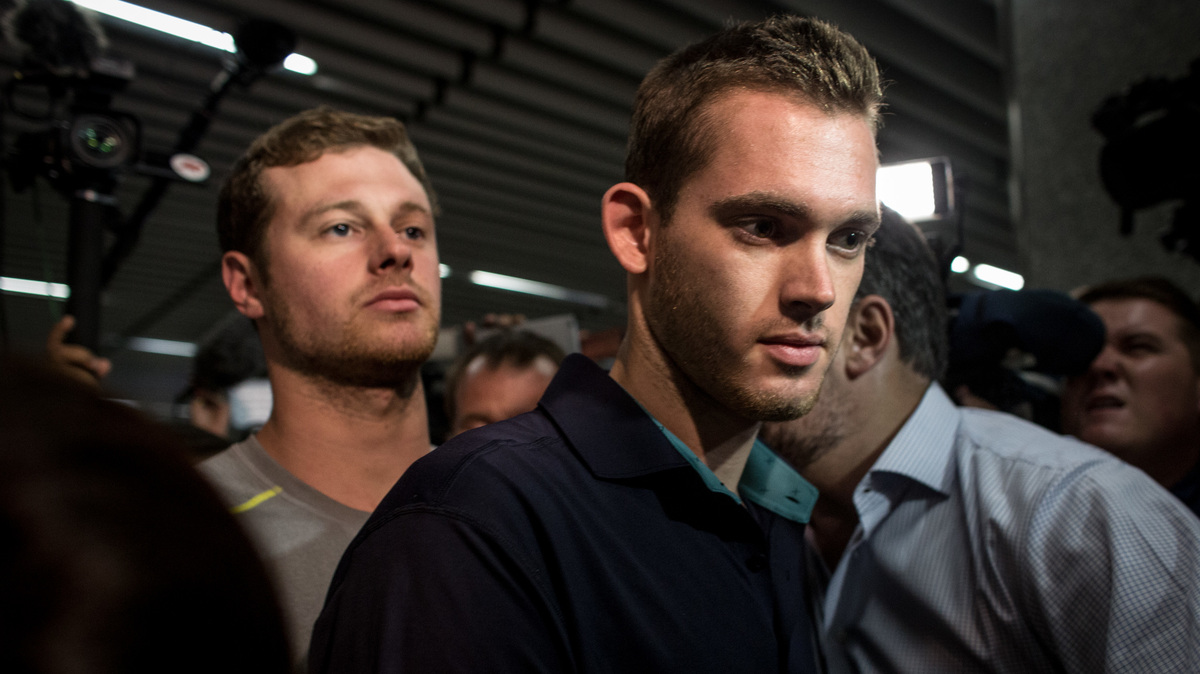 "There was no robbery," says Rio de Janeiro Civil Police Chief Fernando Veloso, at a Thursday news conference about four U.S. swimmers who claimed to have been held up at gun point during their time at the Summer Olympics.

Speaking Thursday at a news conference about the robbery that was reported by decorated U.S. swimmer Ryan Lochte, Veloso said that Gunnar Bentz and Jack Conger, two of Lochte's teammates who were with him on the night in question, have now confirmed that the robbery story was a fabrication.

U.S. Olympic Committee CEO Scott Blackmun is apologizing for how the four American swimmers behaved in Brazil, saying that Bentz and Conger have now been allowed to leave Rio after cooperating with the local authorities.

Today's news conference comes after video from surveillance cameras emerged that showed the swimmers during their stop at a gas station in Barra da Tijuca, on their way back to the Athletes Village after a night of partying.

Referring to that video, Veloso says multiple witnesses have described a scene in which the swimmers vandalized the bathroom, were asked to pay for it, and got testy. He added that the video supports that version of events.

The police did confirm one element that's common to all versions of the events that transpired around 6 a.m. local time this past Sunday: that the group of U.S. swimmers had a gun pointed at them. But instead of a robbery, it seems that the guns were wielded by security guards who kept the swimmers from leaving.

Contrary to some earlier reports, the police say there was no physical violence between the swimmers and workers at the gas station who reportedly wouldn't let the Americans leave without paying for damages.

One day after police pulled two of Ryan Lochte's teammates off a U.S.-bound plane to discuss their claims of being robbed last weekend, reports emerged that the group was involved in an altercation that centered on the gas station's bathroom.

The police clarification comes as the case has generated new and conflicting details — and, particularly in Brazil, accusations online that Lochte is a liar. But even as new details emerged in recent days, Rio 2016 spokesman Mario Andrada downplayed the case's significance at a briefing Thursday morning.

"Let's give these kids a break. Sometimes you take actions that you later regret. They are magnificent athletes," Andrada said. "Lochte is one of the best swimmers of all times. They had fun. They made a mistake. It's part of life. Life goes on. Let's go."

Despite that sentiment, many here in Rio — and anyone who's confused by what's become a convoluted story involving international flights, a possible false crime report and accusations of wanton urination — are unwilling to let go so easily.

'What Would Ryan Do?' Now We Know

Earlier today, Chief Veloso said the American athletes owe Rio an apology, reports the Globo news outlet, which quoted him saying, "The only truth they told is that they were drunk."

Veloso spoke after a new narrative began replacing the one initially put forth by Lochte and his teammates — his roommate Jimmy Feigen, along with Gunnar Bentz and Jack Conger — in which they described visiting a gas station where the athletes had said they were robbed.

In both versions of the story, the Americans were heading back to the Athletes Village after a late-night party. But then, Rashomon-like, the variations emerge. In one version, the athletes wrecked the station's bathroom; in another, they urinated in public after arguing with station workers. In Lochte's, a gun was pointed at him. Some reports claimed a fight had taken place. In all but Lochte's account, the scene ended with an argument about paying for damages.

Local media here in Rio have been showing footage from the gas station's camera surveillance system that captured video of the swimmers' visit. That footage shows that all of the athletes had gone down a hall in the station — and that when they returned, several of them tried to get in the wrong cab before finding the right one. After their vehicle was approached by station attendants, the athletes eventually got back out.

Time codes on the surveillance video suggest that the swimmers spent at least 10 minutes at the station — including a long stint in which they sat along a wall, after station staff approached their taxi. Local outlets report that a security guard pulled out his gun to keep them from leaving without paying.

These new versions of events are vastly different from the one put forth by Lochte. In his original account, the four Americans' vehicle was stopped by thieves, and while he initially resisted their attempts to rob him, he eventually went along.

Here's what Lochte told NBC, as we reported Sunday: "I put my hands up, I was like 'whatever.' He took our money, he took my wallet — he left my cellphone, he left my credentials."

After news of the alleged robbery spread, Lochte put out a statement via Instagram and Twitter that read in part, "While it is true that my teammates and I were the victims of a robbery early Sunday morning, what is most important is that we are safe and unharmed."

Police have been puzzling over the case since Sunday, and a new twist arrived Wednesday, when video from the security checkpoint at the Athletes Village showed Lochte and his friends arriving home from their night out, looking no worse for the wear, and retaining several expensive items thieves often target, such as their cellphones and watches.

Last night, police removed Bentz and Conger from their plane at Rio's Tom Jobim International Airport and took them to a nearby police station for what's been reported as four hours of questioning. Feigen, their teammate, had checked in for the same flight but did not board the plane.

Thursday, the U.S. Olympic Committee says that Bentz and Conger, along with Feigen, "are cooperating with authorities and in the process of scheduling a time and place today to provide further statements to the Brazilian authorities. All are represented by counsel and being appropriately supported by the USOC and the U.S. Consulate in Rio."

Wednesday morning, police tried to seize the passports of both Lochte and Feigen, but Lochte is currently back in the U.S. — on Wednesday, his attorney told NPR that he had not received any communications about the case from Brazilian authorities.