Accessibility links
Shakur Stevenson Wins Silver Medal After Losing Fight To Cuban Boxer : The Torch "I was in my own world, I was crushed," says boxer Shakur Stevenson, 19, after losing the gold medal to Cuba's Robeisy Ramirez at Rio's Summer Olympics in a split-decision Saturday. 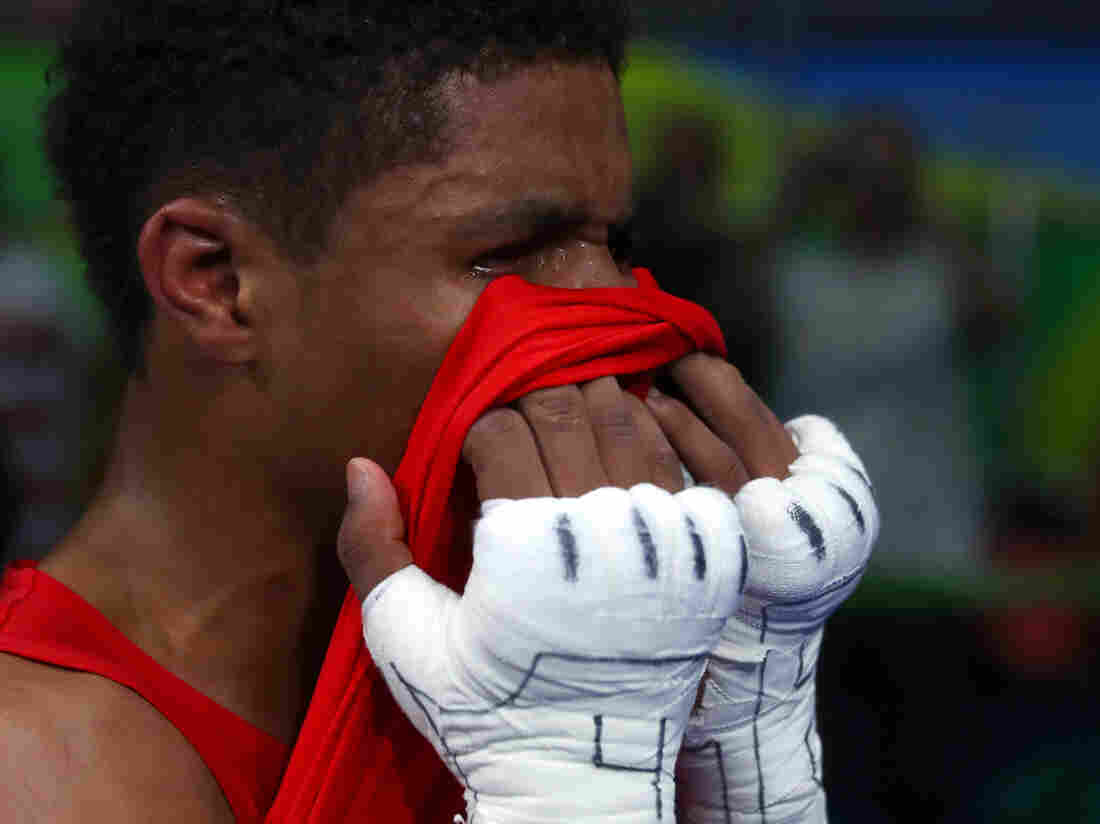 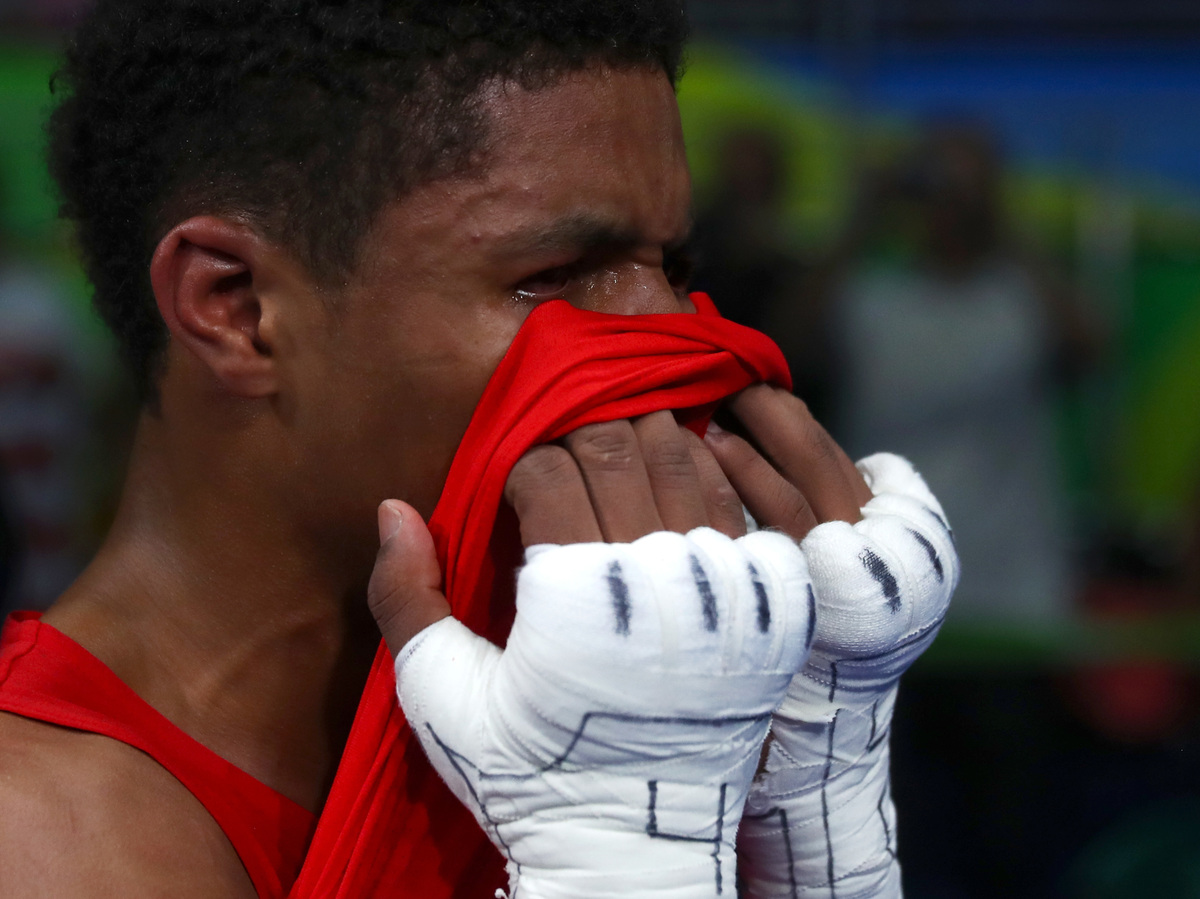 After losing his gold medal match on a split decision, U.S. boxer Shakur Stevenson was visibly distraught. The gold medal went to his opponent in the bantam (56kg) final: Robeisy Ramirez of Cuba.

Boxer Shakur Stevenson lost the gold medal to Cuba's Robeisy Ramirez at Rio's Summer Olympics Saturday, in a split decision that left the American distraught after their three-round fight.

The two rounds that Stevenson, 19, lost in this gold medal bout were the first he'd lost in Rio.

The fact that he'd just won the highest Olympic medal for the U.S. men's boxing team since 2004 did little to console Stevenson.

After the fight, the American pulled his boxing jersey over his face as he left the ring, plainly emotional after the decision didn't go his way. He later said he was upset and disappointed – but not surprised — as the fight was clearly a close one.

"We both had game plans," Stevenson said. "His worked."

As he left the arena, Stevenson was consoled first by teammate Claressa Shields – and, later, by Ramirez, 22, who walked behind the media tent with him as they prepared for their medal ceremony.

A distraught @ShakurStevenson is consoled by @Claressashields after #boxing gold medal fight pic.twitter.com/jeStmQg2e3

Urging her friend and teammate to stop crying, Shields, 21, put a bear hug on the weeping Stevenson, who had a towel draped over his head.

"It's all right," Shields told him. "I love you. You boxed your heart out."

She then walked the talented boxer backwards into the media zone at the boxing venue – but Stevenson wasn't ready to talk yet. A few minutes later, he spoke to reporters.

Stevenson later said that he didn't recall anything anyone had said to him.

He later added, "I apologize to everybody back home that I let down."

We'll note that when a group of reporters heard the young boxer say that, they let out an audible sound of protest before being rendered (momentarily) speechless. Stevenson has been an obliging and smiling presence at these Olympics, just as he was when we first met him in New York City back in the spring.

After the fight, Stevenson said that he plans to turn pro — and hopes to win world titles and set records. And perhaps, he said, he could have a rematch with Ramirez.

"Hopefully they allow Cuba to go to the pros in America," he said, "because I definitely want to fight him again."

Stevenson willingly posed for photos with his silver medal, although the only times we saw him smile came during his conversations with Ramirez.

During their fight, the crowd was rowdy – and its favor tilted decidedly toward the Cuban's corner. As we've seen at other bouts, American fans' attempts to chant "U-S-A!" were shouted down at the Rio Centro venue.

Speed was not lacking in this gold medal match: Each fighter showed an ability to elude the other's punches, and an early jab by Stevenson was met with a flurry of punches from Ramirez.

It wasn't until the last minute of the first round that an advantage seemed to be taken, as Ramirez rushed the American into the ropes, scoring points with both the crowd and the judges.

The shorter Ramirez – listed at 5'3" to Stevenson's 5'7" – was clearly intent on making this an inside fight, rather than letting the American fend him off and score points with his reach. With nifty footwork, he rarely looked off-balance as he worked to get inside on Stevenson.

In the second round, both the American and the Cuban looked for ways to get at the other's body, after spending much of the initial round seeming to calculate their opponent's speed and reach.

"He had a good third round," Stevenson said of Ramirez. He credited the Cuban boxer for fighting a smart counter-punching fighter. He said the Cuban had thrown many punches – and although Stevenson said they hadn't landed, he acknowledged that the combinations Ramirez had hurled at him might have been what swayed the judges.