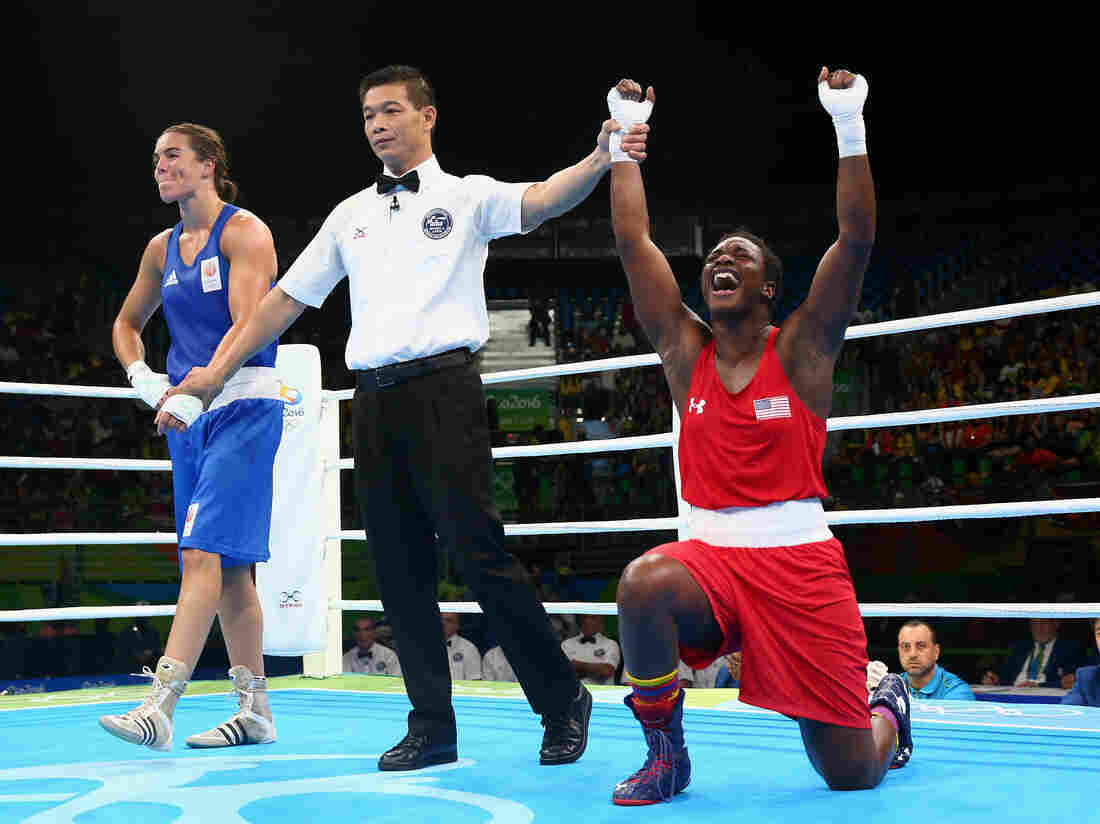 Claressa Maria Shields of the U.S. celebrates her gold medal win over Nouchka Fontijn of the Netherlands in the women's middleweight bout at Riocentro, on the last day of the Rio 2016 Olympic Games. Alex Livesey/Getty Images hide caption 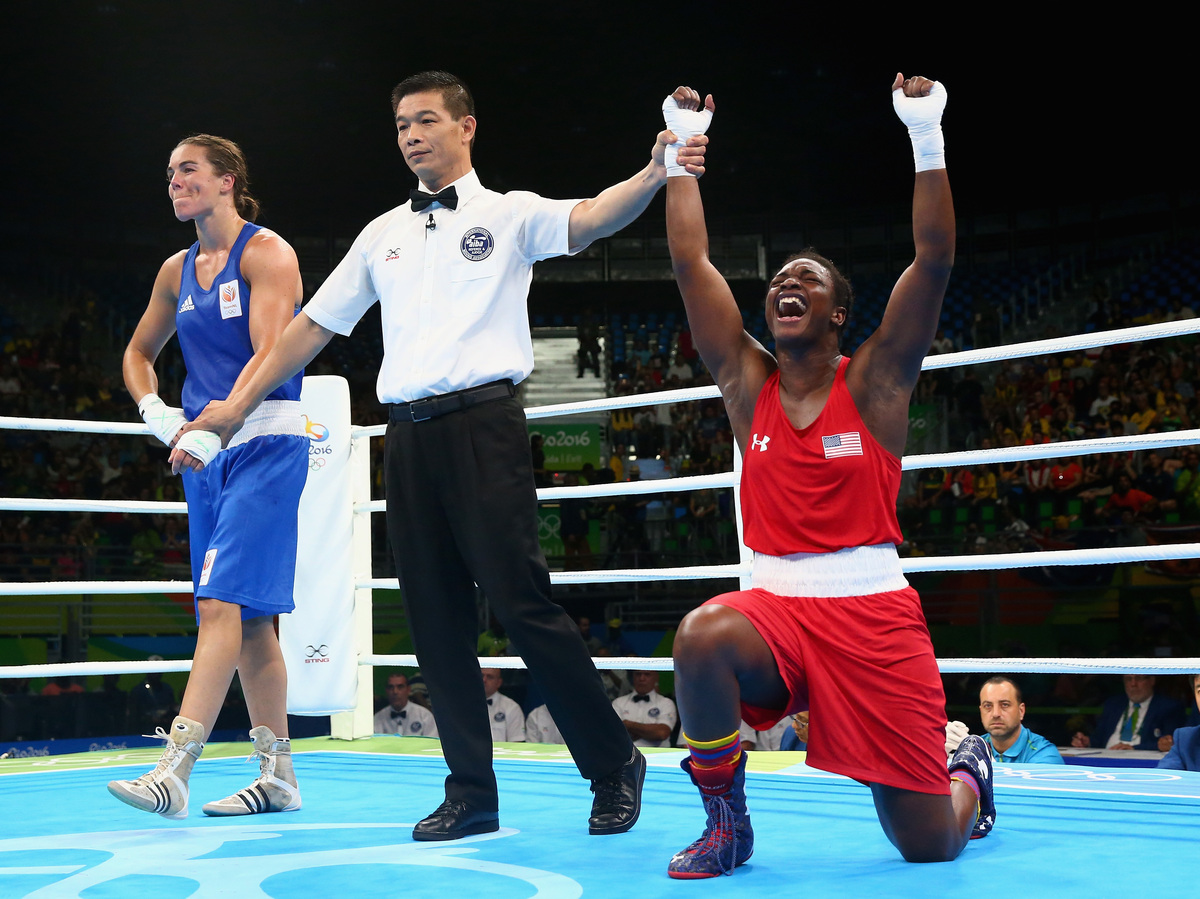 Claressa Maria Shields of the U.S. celebrates her gold medal win over Nouchka Fontijn of the Netherlands in the women's middleweight bout at Riocentro, on the last day of the Rio 2016 Olympic Games.

Standing 5 foot 8 to Fontijn's 5 foot 9, Shields showed her versatility and speed in this fight to win her second gold medal.

Shields, 21, set the tone early, coming out at the bell with a wicked hook aimed at Fontijn, 29. But Fontijn showed herself to be elusive, bobbing out of the way of some of Shields' most dangerous blows. She also kept a left jab ready, to try to fend off the American.

Looking for an opening, Shields stalked Fontijn around the ring, bursting toward her with a quick jab. In one exchange, Fontijn landed both a left jab and a solid right to Shields' head.

We'll remind you that the women in Olympic boxing are still wearing head gear, equipment that the men have now done away with.

The second round saw the boxers switch roles at times. While Shields had been stalking Fontijn around the ring in the first round, in the second she changed her footwork — and in one artful sequence, she backpedaled smoothly out of trouble before landing a solid right on Fontijn.

"I just wanted to win the first two rounds clear, that's all I wanted," Shields said of her strategy in the fight.

The crowd, loud and rowdy, enjoyed this bout, particularly when both boxers showed a willingness to stand nearly toe-to-toe and trade punches.

In the third round and again later, Shields showed her unconcern with being hit by Fontijn, dropping her gloves to her waist so she could wind up big punches. Some of those landed, and Shields followed them with a flurry of other hits.

By the fourth round, it was Shields' fight to lose, and she again dropped her fists and used her speed to dodge Fontijn, bobbing left and right. As before, she then went back to work, putting her gloves up and punishing Fontijn with hard, looping punches anytime she got too close.

In one sequence, Shields countered a Fontijn punch with a hard right hand to her opponent's chest, before landing a powerful left to her head.

When the judges' decision was announced and the American's glove was raised after the match, Shields was ecstatic. With her victory declared, she did a cartwheel in the ring. Then she stepped out of the ring to take a U.S. flag on a quick victory lap around the arena.

Shields' road to Rio has been unlike many other Olympic athletes. It winds from her hometown of Flint, Mich., to Colorado Springs, where she now lives and trains.

After her London win, Shields became something of a sensation, winning fans and followers with her candor and enthusiasm. But as Sue Jaye Johnson has reported for NPR, Shields hasn't been able to convert her fame into the slew of endorsement deals one might expect. Those sponsorship deals would bring money — money that could help both Shields' training and help her family.

"Everybody was saying, 'You should be signed with Nike, you should be on a Wheaties box, how come you aren't in this magazine?'" Shields said earlier this summer. "It got to the point where I just shut everybody out. I can't hear that anymore. I really can't dwell on what I didn't get."

As for what her plans are now, Shields says she's ready to get back home.

"I just want to go home and see my mom," she said. "I haven't seen my mom in four months. I want to see my sister and my little brother."