Accessibility links
The Rio Olympics: Or, How I Learned To Stop Worrying And Love Uncertainty : The Torch The nuanced vibe of a city can't be captured by an aerial "spider camera" that crawls far above everyone's heads. 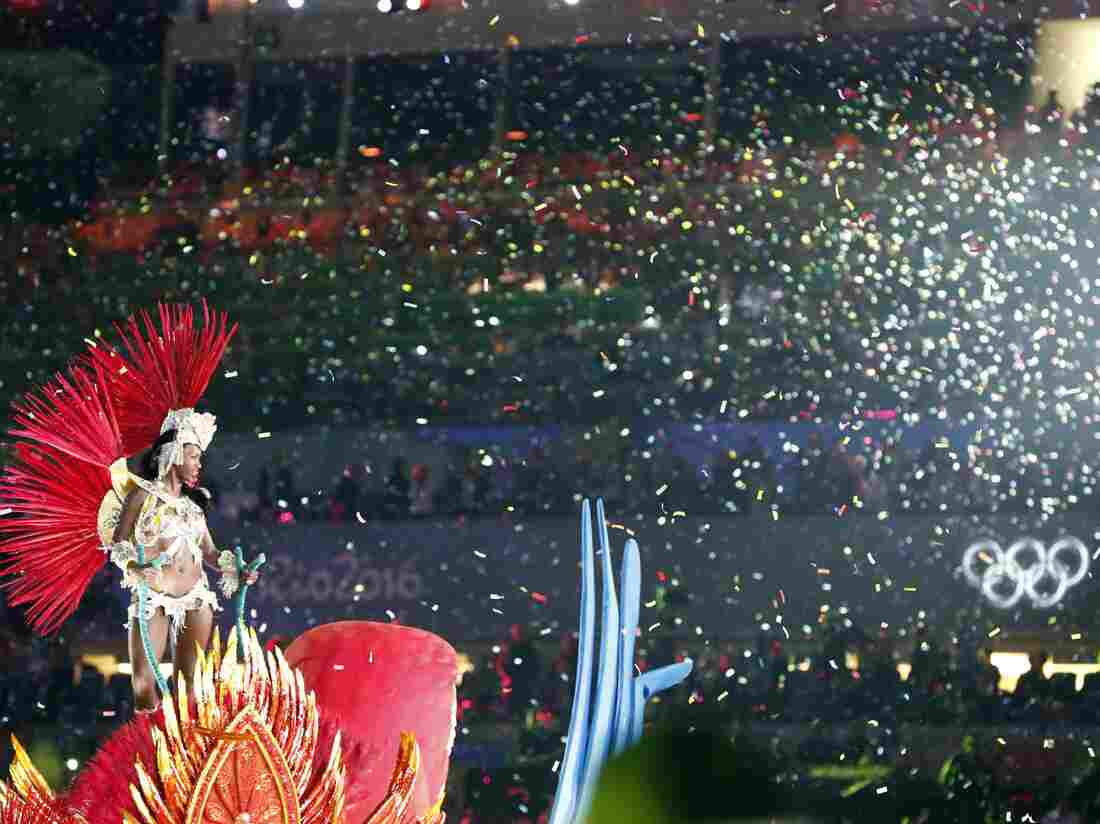 The closing ceremony of the Rio Games on Sunday gave the city one last chance to party at the Olympics. Odd Andersen/AFP/Getty Images hide caption 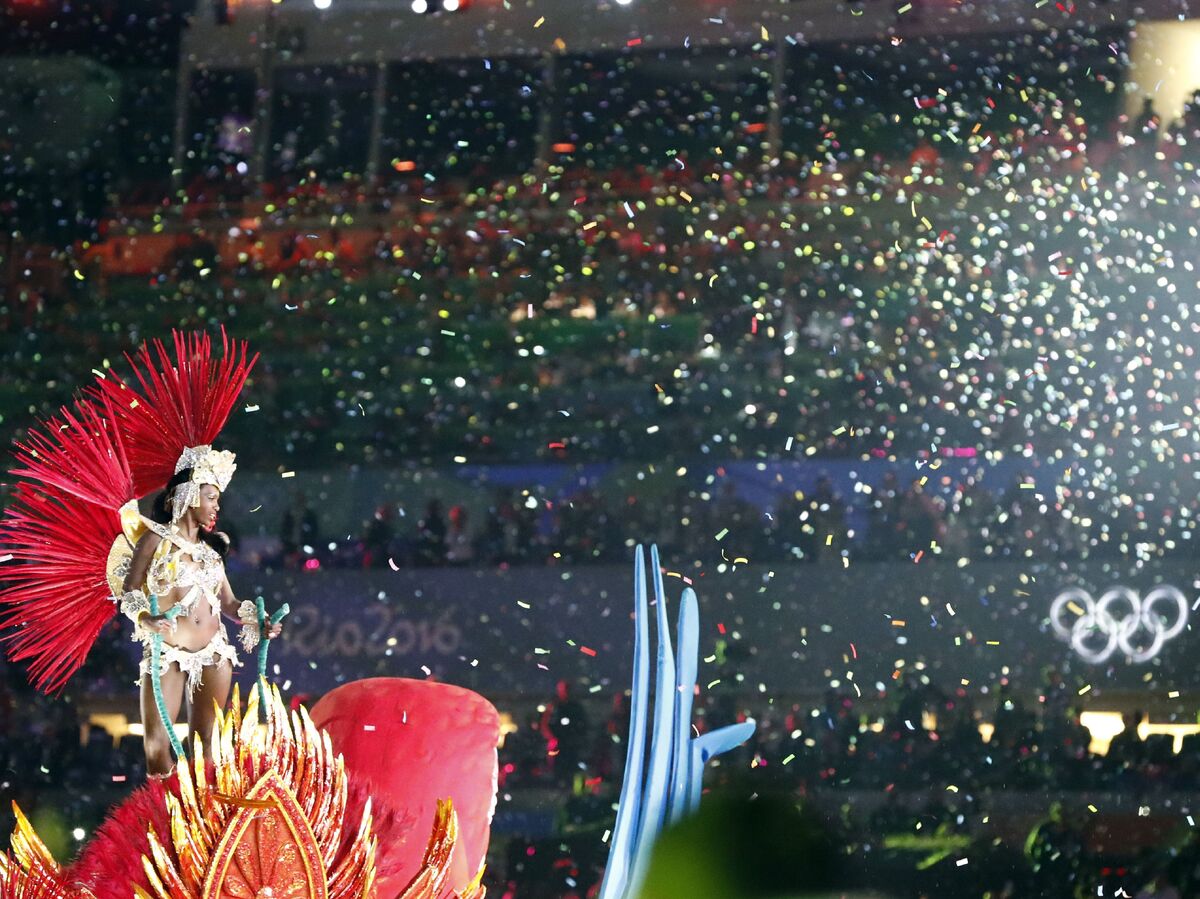 The closing ceremony of the Rio Games on Sunday gave the city one last chance to party at the Olympics.

This has been an Olympics of questions: Will everyone who goes to Rio get Zika? Can they survive the polluted water — or the polluted air? Will criminals ruin the games? Are Rio and its venues chaotic? And what is up with that green water?

Those are some of the questions I was asked by friends, colleagues and NPR's audience after I got to Rio. Several times, I gave a joking answer that was only half-joking: that the Rio Olympics are like a three-week Mentos commercial.

If you're unfamiliar with that reference, here's the formula: Everything seems fine, and everybody's good-looking. Then a catastrophe looms, and everything's going to be ruined — until, inevitably, somebody breezes in with a solution, with a wink and a smile.

Or, as was often the case here in Brazil, the problem solver gives a quick thumbs up. It's a pattern that I saw repeat itself over and over in the three weeks I've spent here covering the Olympics.

In Rio, the Mentos-grade "catastrophes" I saw in person were unquestionably minor — a bag slipping off a counter is narrowly saved by a stranger, for instance. Or a busload of journalists can't get to a far-away tournament because there's no bus — until a Rio staffer climbs into a different bus, changes its sign to match their destination and tells them, "Let's go!"

But these games faced a still bigger problem: The Olympics do not want to be in a Mentos commercial. From athletes and organizers to the sports and media veterans who have been going to the games for decades, brushes with catastrophe — even small ones or those that don't actually transpire — are their anathema.

And that's a shame, because as my time in Rio illustrates, when you embrace uncertainty, it makes it even more delightful when things work out.

In Rio's Favelas, Hoped-For Benefits From Olympics Have Yet To Materialize

People have called the Rio Olympics a gamble ever since the International Olympic Committee awarded the games to a South American city for the first time back in 2008. And many treated the questions that were being asked — about the political and economic chaos, the pollution and construction issues, the Zika virus, the threat of violent protests — as proof that Rio was a bad bet even before these games started. In Rio's favelas, violence surged this month.

Those issues would have challenged any Olympic city — but we should note that once the games got underway, two scandals emerged from the U.S. and Olympic establishment that distracted people from the competition. In Rio, a high-ranking IOC official was arrested under suspicion of being part of a ticket-scalping scheme. And Ryan Lochte led a group of U.S. swimmers into an embarrassing scandal that required a U.S. Olympic Committee apology.

For Rio, the gamble of these games was also something else: an aspiration. Powered by Brazil's erstwhile thriving economy, the city that won an Olympic bid wanted a chance to show that it's among the world's great cities.

Rio also wanted to prove it was up to the challenge of putting on these games — a point that Rio 2016 President Carlos Nuzman mentioned three times in his speech at Sunday night's closing ceremonies. It remains to be seen how things will work out for the Paralympic Games, which are now mired in financial uncertainty.

Monday, one day after the Olympic flame was extinguished in Rio, it seems to me these Olympics might have more in common with the Atlanta Olympics of 1996 than with the London Games of 2012.

I lived in Georgia when Atlanta hosted, and back then, I saw a mixed bundle of feelings that I've sometimes recognized here in Rio: People who had nothing to do with their city's Olympic bid expressed excitement and pride over hosting the world — and they also felt a protective urge, perhaps even a dread, that the world would never see a sprawling city's allure or appreciate the friendliness of its residents.

That's the nature of hosting the Olympics, to some extent: The nuanced vibe of a city can't be captured by an aerial "spider camera" far above everyone's heads, and the glare of international media attention is often blind to the small moments of patience and grace that locals share with visitors.

Rio seized its last chance to show that charm Sunday night. In a closing ceremony that featured striking moments of beauty and fantastic music, it also gave the city one last chance to party at the Olympics.

During the ceremony, Rio 2016's Nuzman told the crowd something he said they should already know: "The best place in the world is here. It is now."

I arrived at the ceremony after a more than two-hour trip that included a long bus ride, taking two of Rio's metro trains, a half-mile hike in the rain and then a circling of the arena to find the right entrance.

Transportation problems had forced me and three other journalists — one from China, one from Australia and one from Brazil — to take an unusual route to the ceremony, and we found ourselves being let off near Ipanema Beach, far from Maracana Stadium. We were late, it was pouring rain on our equipment, and at seemingly every turn, we met with an unexpected setback.

But as I've seen happen here, we were also laughing. As absurd as our problems seemed — a group of strangers banded together on a quest, getting to know each other as they dealt with security searches and setbacks — we knew it would all work out. And it did, just when it seemed hopeless. Maybe call it the Mentos effect.