Accessibility links
After Going For Gold, Athletes Can Feel The Post-Olympic Blues : The Torch After years of training and all the attention and hype, athletes can experience a profound letdown, even depression, when the games are over. They can struggle to fill a void in their lives. 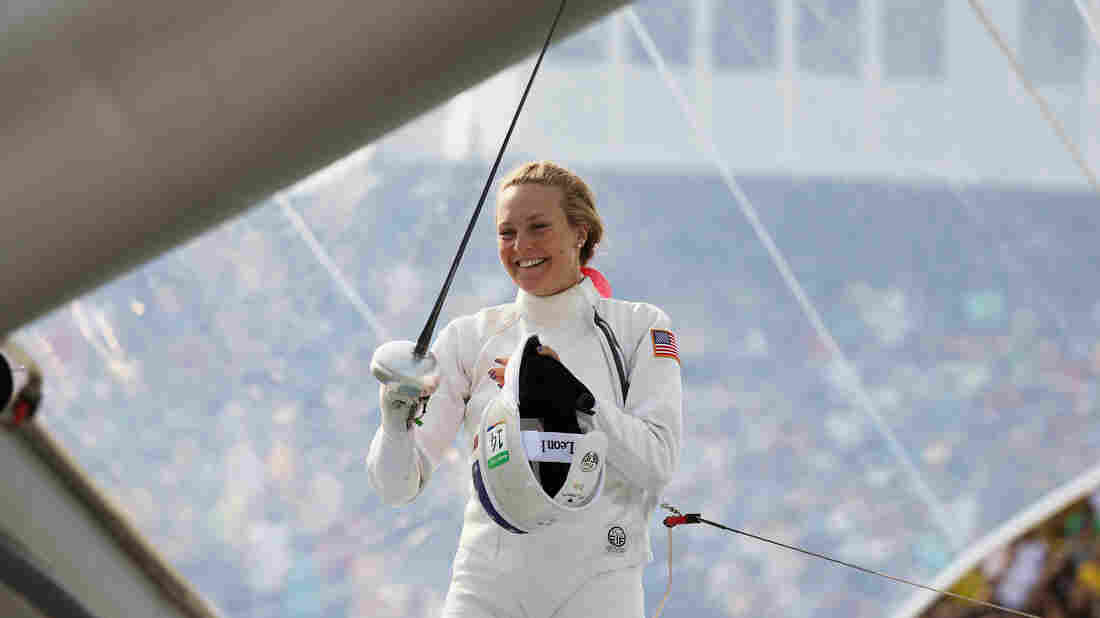 American Margaux Isaksen smiles during the women's fencing in the Modern Pentathlon on Aug. 19 at the Rio Olympics. She finished fourth in London in 2012 and 20th in Rio. "It makes you feel sort of worthless," Isaksen says of her performance. She calls this current period a "post-Olympic depression." Rob Carr/Getty Images hide caption 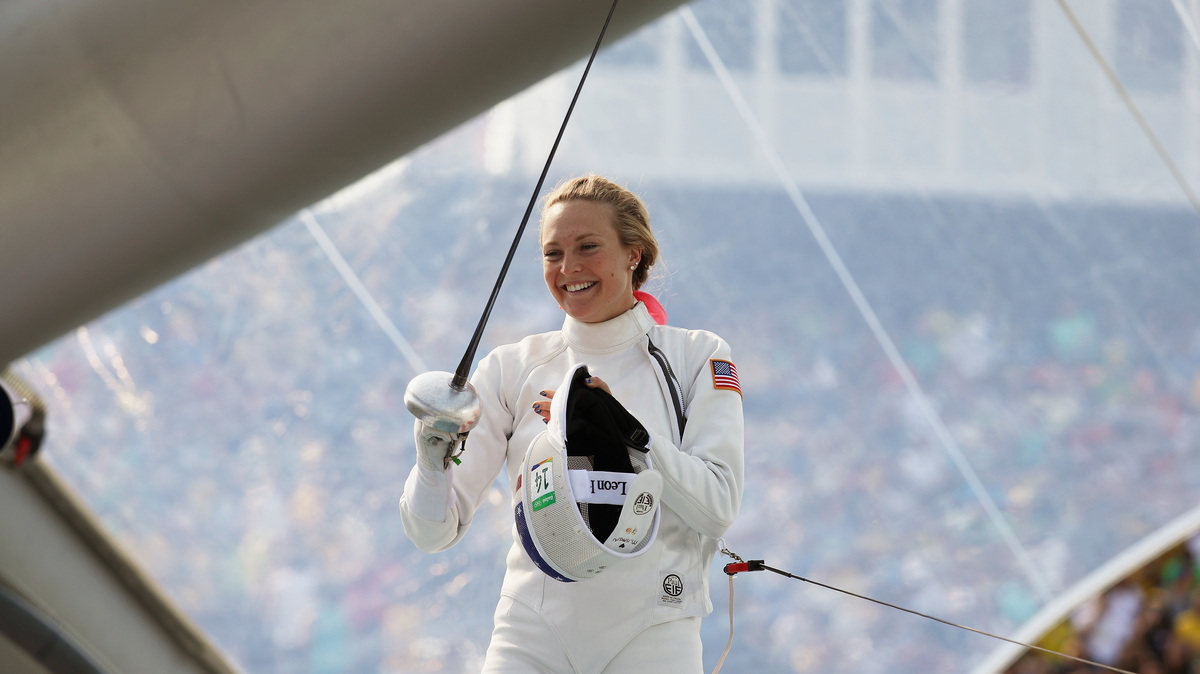 American Margaux Isaksen smiles during the women's fencing in the Modern Pentathlon on Aug. 19 at the Rio Olympics. She finished fourth in London in 2012 and 20th in Rio. "It makes you feel sort of worthless," Isaksen says of her performance. She calls this current period a "post-Olympic depression."

The Rio Olympics are in the rear-view mirror. Thousands of athletes have returned home to resume their lives. But for many, this post-Olympic period can be a rough one, with depression and anxiety haunting them after the games.

That depression can affect both stars and lesser-known athletes alike.

Swimmer Michael Phelps, the most decorated Olympian of all time, has talked candidly about his downward spiral after the 2012 London games that led to a DUI arrest and time in rehab.

Phelps has been something of a savior to his friend and fellow swimmer Allison Schmitt. She also suffered profound depression after the London Olympics and has become an outspoken advocate for mental health treatment, especially for elite athletes.

Consider that these athletes have spent years, maybe decades, building to the all-consuming goal of making the Olympics.

Now, it's over. All of the buildup, the hype and media attention, the extreme adrenaline rush of competition, have come to a crashing halt.

"You work so hard," says Karen Cogan, sports psychologist with the U.S. Olympic Committee. "You put everything into it, and for some athletes, their performance is over in a matter of seconds, literally. And then it's done, and now what?" 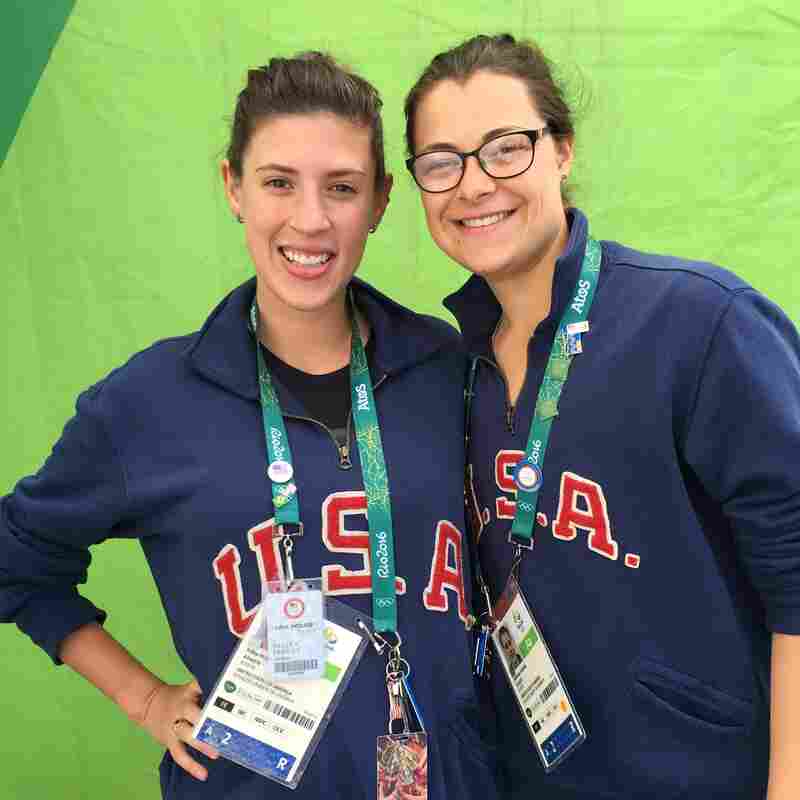 Fencer Kelley Hurley (left) with teammate Kat Holmes at the Olympics in Rio in August. "You feel a little empty" after the games, says Hurley, expressing a sentiment felt by many athletes who prepared for years. Melissa Block/NPR hide caption 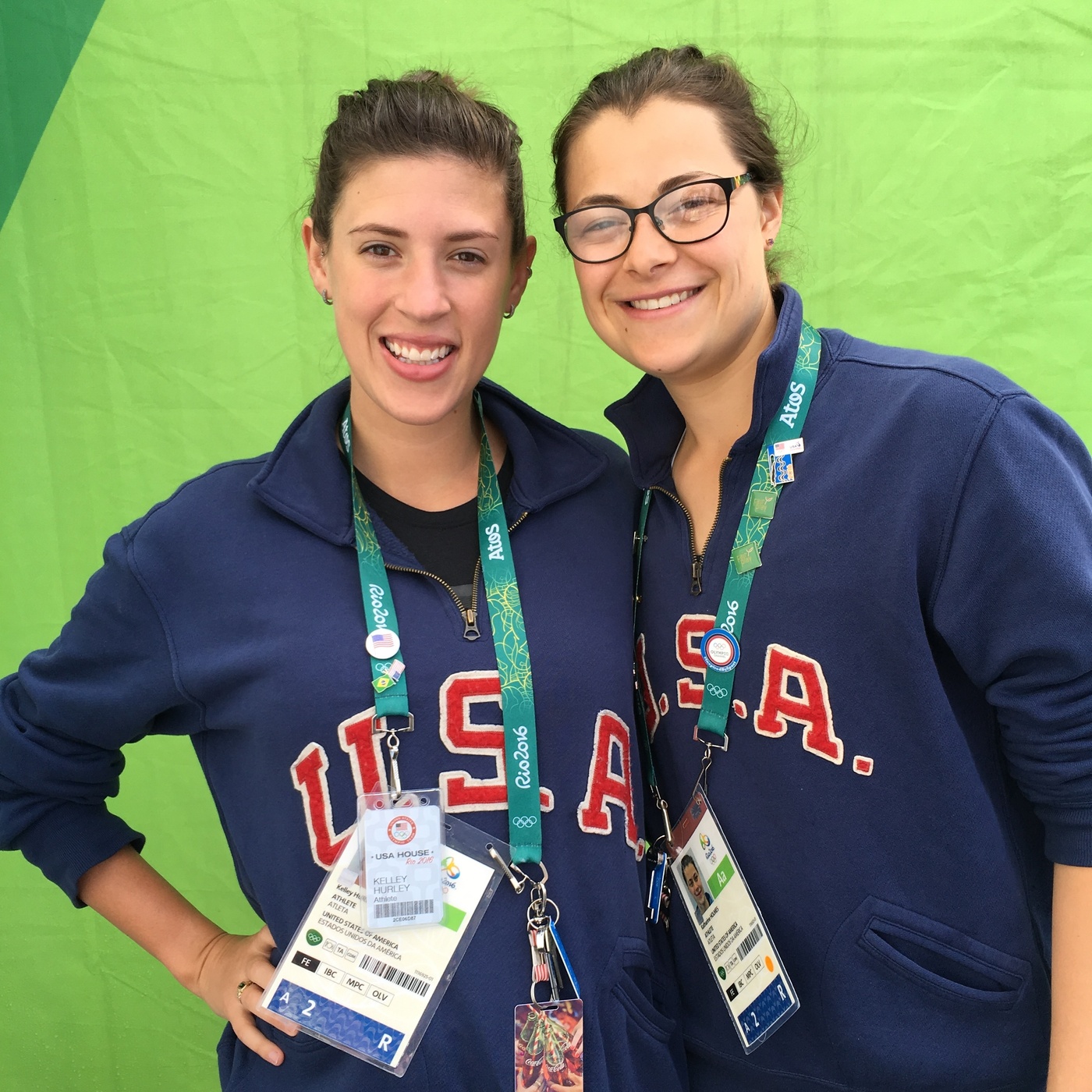 Fencer Kelley Hurley (left) with teammate Kat Holmes at the Olympics in Rio in August. "You feel a little empty" after the games, says Hurley, expressing a sentiment felt by many athletes who prepared for years.

That's what fencer Kelley Hurley, 28, is asking herself.

I talked with her a couple of weeks ago as she was packing up to leave the athletes' village in Rio, heading back home to San Antonio. Her epee team finished fifth.

"You feel a little empty," she said. "Everything that you did all came up to one point, and now it's over and the new chapter begins, and where to start writing?"

This was Hurley's third Olympics. Now, she's wondering if she should try for a fourth.

"Should I do school or make new friends, because I lost them all in the last four years, when I haven't had time to hang out with any of them," she says, ruefully.

Hurley hopes that, with the Olympics behind her, she can finish her masters in public health at the University of Texas, San Antonio.

Like Hurley, many athletes have put their lives outside of sport on hold. Some have delayed or taken time off from college. They've likely missed out on important family events, like weddings and funerals.

Now they're reckoning with the future.

For triathlete Greg Billington, 27, of San Diego, becoming an Olympian was a driving goal for nearly 20 years. Ever since he started swimming around age 8, he wanted to qualify for an Olympic team. Posters of Olympic gold medal backstroker Lenny Krayzelburg hung on his bedroom walls.

So when Billington qualified to compete in Rio, he considered it the absolute pinnacle of achievement.

"It kind of changes who you are," he says. "You're trying to become the best version of yourself that exists. There's nothing that quite grips your imagination like qualifying for an Olympic team does, so that's what makes it hard to replace." 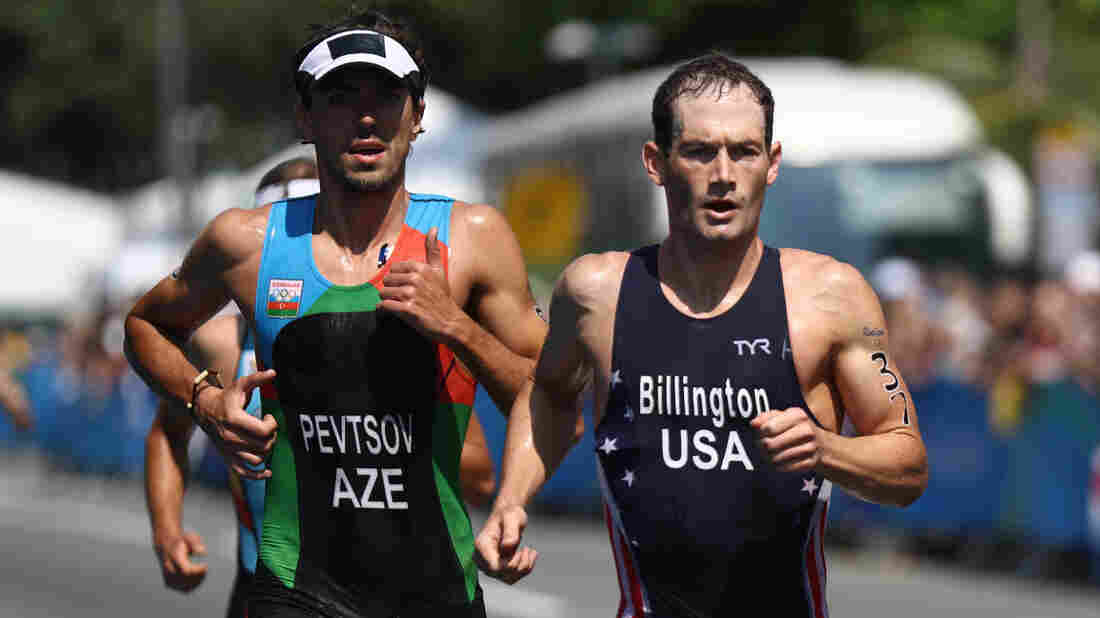 U.S. triathlete Greg Billington competes in the Olympics in Rio on Aug. 18. He finished 37th. "Currently nothing fills that void," Billington, 27, says of the post-Olympic period. He plans to seek a spot on the U.S. team in 2020. Bryn Lennon/Getty Images hide caption 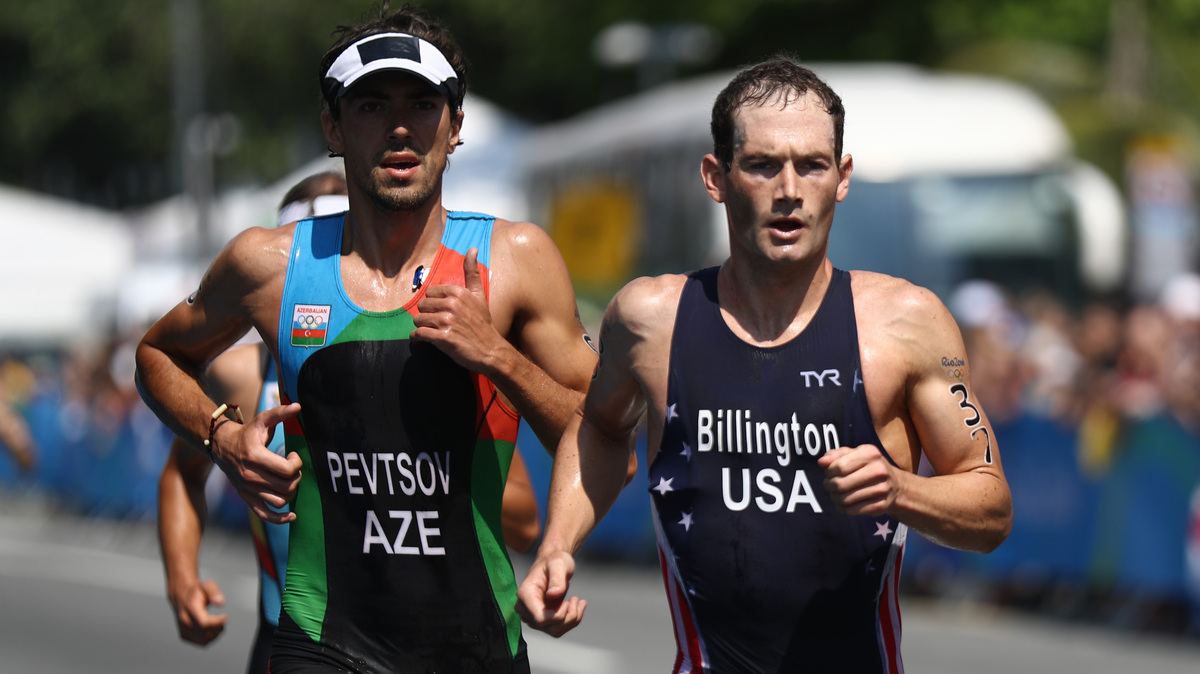 U.S. triathlete Greg Billington competes in the Olympics in Rio on Aug. 18. He finished 37th. "Currently nothing fills that void," Billington, 27, says of the post-Olympic period. He plans to seek a spot on the U.S. team in 2020.

In the end, Billington didn't have a good triathlon in Rio. He finished 37th. Now that he's home in California, he says the transition has been tough.

"Currently nothing fills that void. It's just a little empty part and that's OK for a little while, as long as it gets filled before it starts to fester," he says.

"I think there's definitely more I can get out of myself in triathlon," he says. After he retires, he's interested in going to business school.

For some athletes, retiring from sport can bring its own set of problems.

"Their identity is so wrapped up in being an athlete and in their sport," Cogan, the psychologist, says. "All of a sudden they don't have that identity in the same way. So who are they going to be? What is the identity going to be? That sometimes is a big struggle."

If they're starting over in a new career, many athletes discover with a shock that they're not among the best any more.

And even for athletes who made the medal podium, they come down from the ultimate high, an explosion of endorphins.

That success can bring its own set of pressures: can I possibly match that again?

Adam Krikorian, who has coached the U.S. women's water polo team to gold medals in the past two Olympics, says apart from the medal itself, it's the shared intense journey that proves impossible to replicate.

"You build this incredible bond, and all of a sudden it's over," he says. "They're gonna go the rest of their life looking to try to emulate this experience. And many of them are gonna have a hard time finding something that's going to equal that passion and that energy and that love."

Cogan often counsels athletes disappointed in their Olympic performance, who get stuck replaying part of their competition constantly in their mind, wishing they could have a do-over.

That's the case for Margaux Isaksen, 24, who competes in modern pentathlon, an event that combines shooting, fencing, swimming, horseback riding, and running.

At the London Olympics in 2012, she finished fourth — so close to a medal.

"I just remember thinking, wow, if I had run a second faster, or I'd got one extra fencing touch, then I would have a medal. And I just came home and I felt so defeated and so sad," says Isaksen, who lives in Fayetteville, Ark.

This summer in Rio, Isaksen was competing five weeks after surgery for a stress fracture in her leg, and she finished 20th.

"It makes you feel sort of worthless," she says. "It's a really strong word, but that's kind of how I feel right now. I really feel like I've let myself down, let my coaches down, and that's hard. And then you don't know if you want to put yourself through that again."

She's finding some relief with yoga, and spending time outside. She's also been bolstered by some tough love from her mother.

"She told me right after Rio just how proud she was. She gave me a big hug. And then she just said, 'You know what, Margaux? There's so much more to life than sport.' And she said, 'Just think about everything that's going on in the world, all the suffering. And just think for a minute about how lucky you are that this seems like the biggest tragedy in your life right now.'"

Isaksen continues: "When you think about that and you put it in perspective, all of my so-called problems? It really doesn't seem like anything at all."

Being an elite athlete is a self-absorbed endeavor, Isaksen admits. Sometimes, she says, you just need a smack in the face to bring you back to reality.