Accessibility links
Russia Is Banned From 2018 Olympics; Athletes Told To Compete Under Olympic Flag : The Torch The decision by the International Olympic Committee follows last year's McLaren report, which said more than 1,000 Russian athletes were involved in manipulating doping controls. 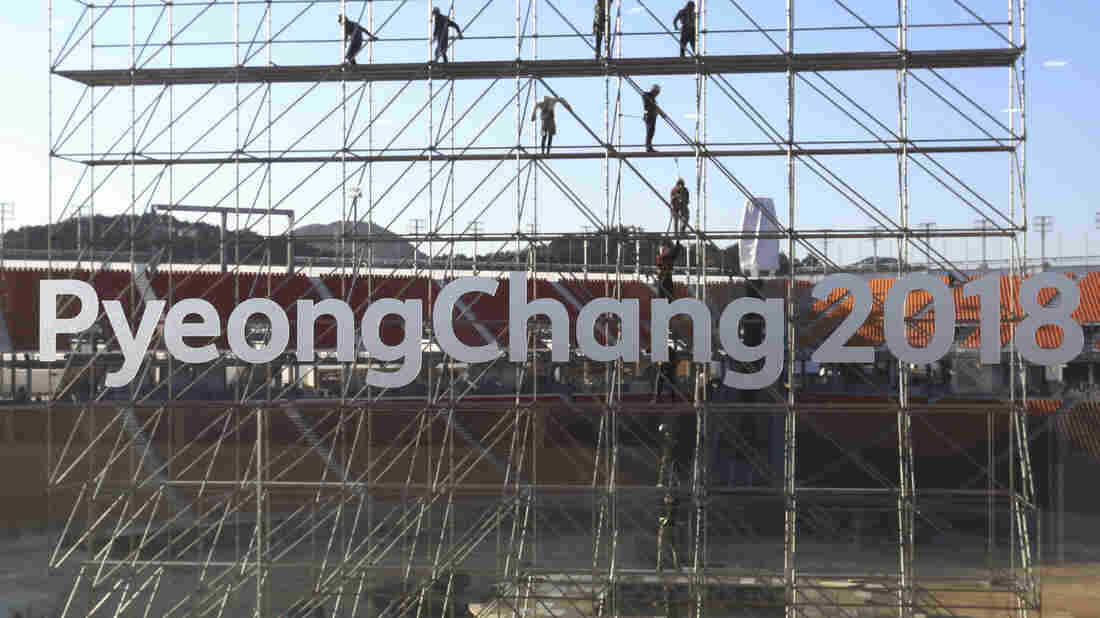 The International Olympic Committee announced Tuesday that Russia's athletes "will compete with a uniform bearing this name and under the Olympic Flag" at the 2018 Games in Pyeongchang, South Korea. Ahn Young-joon/AP hide caption 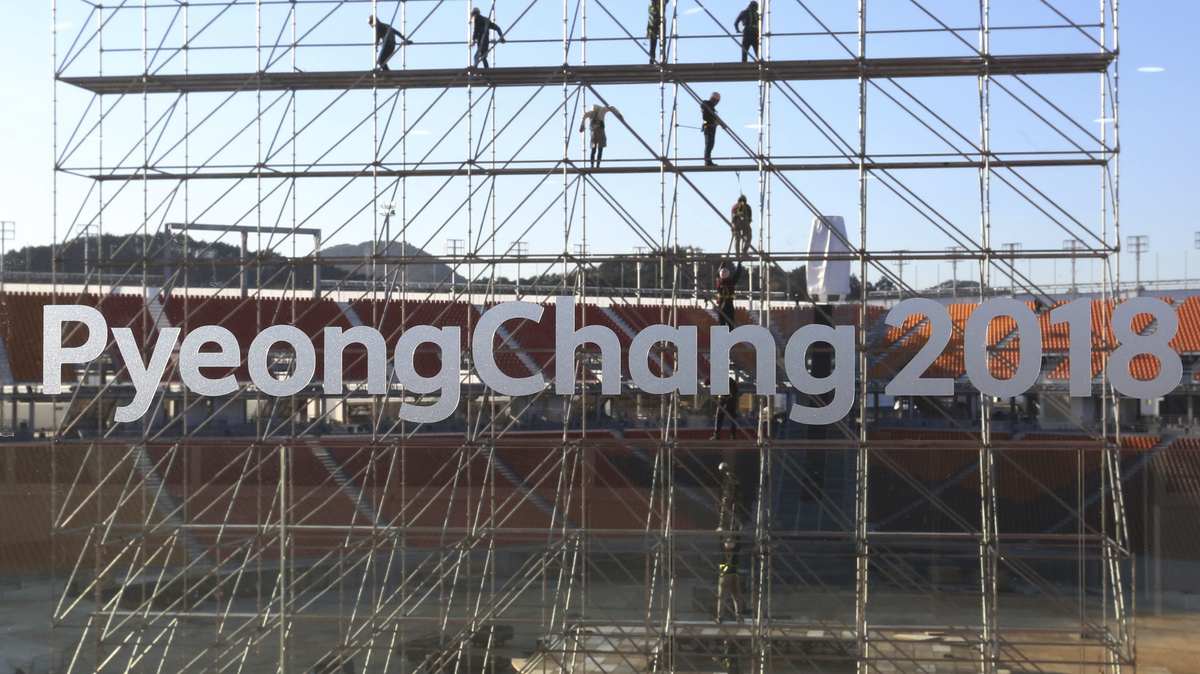 The International Olympic Committee announced Tuesday that Russia's athletes "will compete with a uniform bearing this name and under the Olympic Flag" at the 2018 Games in Pyeongchang, South Korea.

The International Olympic Committee has suspended the Russian Olympic Committee "with immediate effect," essentially banning the country from the upcoming Winter Olympics over Russia's system of state-supported cheating by athletes using performance-enhancing drugs.

Russian athletes can compete in the 2018 Games in Pyeongchang, South Korea, the IOC said Tuesday — but the athletes will have to pass strict scrutiny, and instead of wearing their nation's uniform, they will compete under the title "Olympic Athlete from Russia (OAR)."

"They will compete with a uniform bearing this name and under the Olympic Flag," the IOC said. "The Olympic Anthem will be played in any ceremony."

IOC President Thomas Bach and other members of the Olympic governing body pronounced Russia's fate at a news conference Tuesday afternoon. You can watch it on YouTube.

Bach called Russia's concerted attempts to break the rules "an unprecedented attack on the integrity of the Olympic Games and sport," citing the manipulation of the anti-doping lab at the Sochi Olympics of 2014.

"As an athlete myself, I'm feeling very sorry for all the clean athletes," Bach said.

As it announced Russia's punishment, the IOC also released the latest report by the disciplinary commission chaired by Samuel Schmid, a former president of Switzerland. The IOC's executive board banned Russia based on the Schmid commission's findings of institutionalized cheating.

While the Schmid report criticizes Russia's minister of sport and describes "a widespread culture of doping in Russia," it also states that it didn't find any solid evidence "confirming the support of the knowledge of this system by the highest State authority" — seemingly a reference to President Vladimir Putin.

Of the growing number of athletes who have been stripped of their medals, Bach said the IOC is looking at how to give clean athletes who are elevated to the podium the recognition they deserve months and years after they competed.

"No official of the Russian Ministry of Sport will be accredited for the Olympic Winter Games PyeongChang 2018," Bach said. He added that the ministry's former head, Vitaly Mutko, is barred for life from any Olympic Games.

Mutko was Russia's minister of sport from 2008 to 2016; after he left that post, Putin appointed him deputy prime minister.

Bach also said the Russian Olympic Committee must pay a total of $15 million to pay for the IOC's doping investigation and to contribute money to the Independent Testing Authority "to build the capacity and the integrity of the global anti-doping system."

Reacting to the IOC's moves Tuesday, U.S. Olympic Committee CEO Scott Blackmun said, "The IOC took a strong and principled decision. There were no perfect options, but this decision will clearly make it less likely that this ever happens again. Now it is time to look ahead to Pyeongchang."

The decision by the IOC's executive board follows last year's McLaren report from the World Anti-Doping Agency, which confirmed that Russia's Olympics program had engaged in an "institutional conspiracy" to beat the system that included using a "mouse hole" through which to swap out athletes' drug-tainted samples for clean ones. The investigation was led by Canadian law professor Richard McLaren.

Russian officials have refused to acknowledge the scope and depth of the findings about the country's Olympic teams, saying that the problems were limited to individual athletes. Putin has called the doping charges against Russia "a dangerous return to this policy of letting politics interfere with sport."

Released in two phases, the McLaren report concluded that Russia's scheme involved more than 1,000 Russian athletes and that it also included plans both for manipulating doping controls and for covering up the system.

Ahead of the IOC's decision, NPR's Lucian Kim visited Moscow's famous Gorky Park to hear what Russians are making of the claims against their country in some of its most revered sports.

Speaking to Yekaterina Nogerova, whose 6-year-old daughter was skating out on the ice, Lucian says that she says a decision against Russia would be a "catastrophe" for her. Nogerova also said she is upset that the consequences will likely punish athletes and fans, but not people in the government.

In releasing the McLaren report, WADA recommended that the IOC ban all Russian athletes and government officials from the 2016 Summer Olympics held in Rio de Janeiro. Both McLaren and WADA acknowledged that they lack the authority to punish Russia's athletes.

Instead of issuing a blanket ban on Russia from competing in Rio, the IOC left it to the individual sports' governing bodies to decide who could compete. By the time the report came out, nearly all Russian track and field athletes had been banned by the International Association of Athletics Federations.

To investigate the claims against Russia, the Olympics' governing body has been relying on two disciplinary commissions. The broad investigation has been led by Schmid. Individual cases are being looked at by another commission chaired by Denis Oswald, a Swiss lawyer and former IOC executive board member.

Russia's move into wholesale Olympics cheating is often traced to 2010, when the country's athletes fell well short of expectations by winning only 15 medals at the Vancouver Winter Olympics — a bad omen as the country prepared to host the 2014 Games in Sochi. Investigators say Russian officials went to elaborate means to ensure a better showing — and it worked, as Russia's athletes more than doubled their medal count by winning 33 medals (13 of them gold), the most of any country.

But athletes' blood and urine samples have been subjected to more analysis since the Sochi Games, and in recent weeks, the IOC has been slicing into Russia's medal count, disqualifying athletes from the Russian biathlon, bobsled and cross-country skiing teams who were found to have broken anti-doping rules.

As of last week, Russia had fallen far behind the U.S. and other countries on the Sochi results list. The American team now leads the way with the 28 medals it won in 2014, with Norway second — and that is without the redistribution of medals that were taken away from Russian athletes.

The IOC has also been declaring sanctioned athletes ineligible for future Olympics as it strips them of their victories — an approach that has promised to reshape the field for the upcoming Pyeongchang Games.