Accessibility links
North Korean Athletes Will March With South Koreans At Pyeongchang Olympics : The Torch The two countries will also form a unified women's hockey team to compete in the Winter Olympics in February. The North will send a cheering squad to support its delegation. 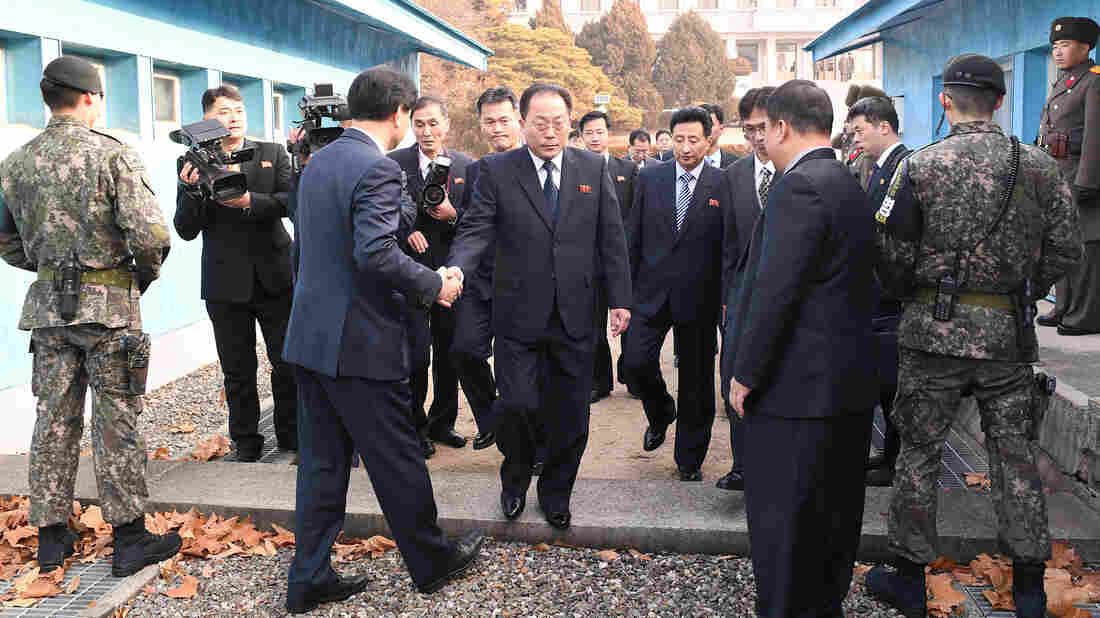 With North Korea planning to participate in the 2018 Winter Olympics, delegation head Jon Jong Su, vice chairman of the Committee for the Peaceful Reunification of the Country, crosses the concrete border to attend a meeting at the truce village of Panmunjom in the demilitarized zone separating the two Koreas. Yonhap via Reuters hide caption 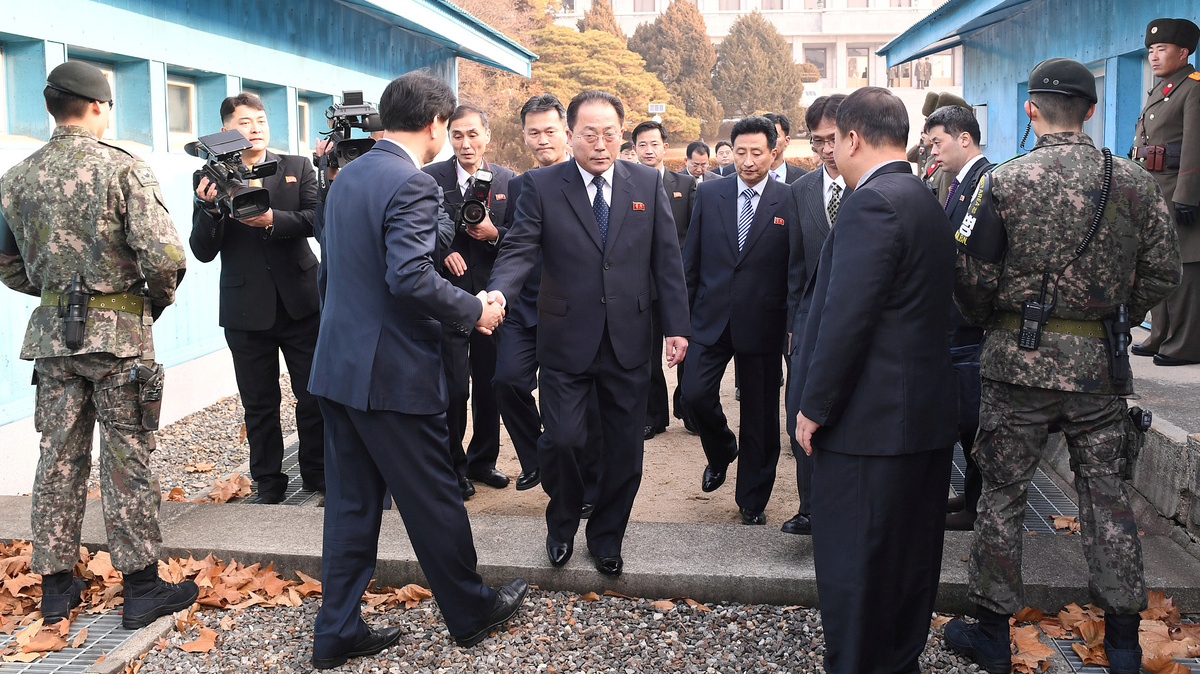 With North Korea planning to participate in the 2018 Winter Olympics, delegation head Jon Jong Su, vice chairman of the Committee for the Peaceful Reunification of the Country, crosses the concrete border to attend a meeting at the truce village of Panmunjom in the demilitarized zone separating the two Koreas.

The details of how North Korea will participate in the upcoming Winter Olympics in South Korea are still being worked out, but the two countries say their athletes will march together at the opening ceremony, under a unification flag.

The two countries will also form a unified women's hockey team to compete at the Pyeongchang Winter Olympics in February, NPR's Elise Hu reports from Seoul. In addition, North Korea will send a cheering squad of 230 people to support athletes who make the trip.

"Cheering squads are typically made up of college-age students and volunteers," Elise reports. "On Monday, the two Koreas agreed that a North Korean orchestra, singers and dancers would come to the South to perform during the games."

South Korea's athletes have previously marched alongside their North Korean counterparts at several Olympics, including the 2000 and 2004 Summer Olympics in Sydney and Athens, respectively, as well as the 2006 Winter Olympics in Turin.

News of the 2018 plan to march together emerged from meetings held by North and South Korea at the Peace House in the border village of Panmunjom, where they've been discussing the pariah regime's inclusion in the games.

North Korea also says it will send a delegation to the Paralympic Games that will follow February's Winter Olympics, according to updates from South Korea's Ministry of Unification.

The last time South Korea hosted the Olympics was in 1988; despite attempts to arrange for North Korea to participate, the regime didn't send any athletes to those games in Seoul.

While North Korea's plans for the 2018 games are being made after all standard deadlines for Olympic participation have elapsed, they're also being welcomed as a sign of easing tensions after months of alarm over North Korea's nuclear program. In January, the two sides met for the first time in two years.

North Korea's cheering squad will likely be an "army of beauties" deployed in a charm offensive, The Korea Herald reports. The country has sent large squads to previous big sporting events hosted in South Korea — and the newspaper adds that leader Kim Jong Un's wife, Ri Sol-ju, was part of one group sent to the Asian Athletics Championships in 2005, when she was a teenager.

Not everyone is happy with the arrangement. An opinion piece in South Korea's Chosun Ilbo today says that given North Korea's small group of athletes, the country shouldn't be allowed to send "an army of clowns, bell-ringers and other assorted rabble." And by marching under a unification flag, the Ilbo's Sonu Jong says, South Korea is losing the chance to put its national flag in the limelight during one of the world's biggest events.

The rare event of hundreds of North Koreans traveling south has prompted questions of how they should move between the cut-off countries. The regime is asking South Korea if its delegation can cross the border over land — presumably in cars and buses — according to the Korea Herald.

So far, the talks have included representatives from the two Koreas and Pyeongchang organizers. The International Olympic Committee will take a more high-profile role this Saturday, when IOC President Thomas Bach welcomes all three delegations.

Topics at that session will range from the names and number of North Korean athletes who will participate, as well as matters of protocol around the regime's flag and anthem, and North Korea's Olympic uniforms and involvement in ceremonies at the Pyeongchang Games.