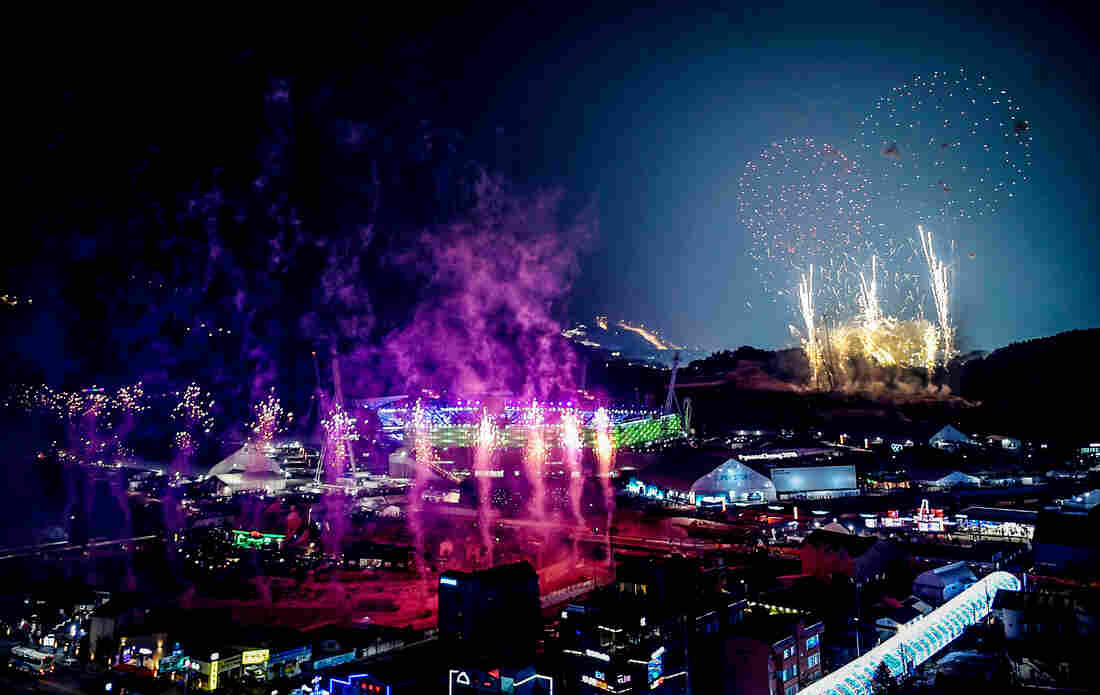 Fireworks go off at the start of the opening ceremony of the Pyeongchang 2018 Winter Olympic Games. Brendan Smialowski/AFP/Getty Images hide caption 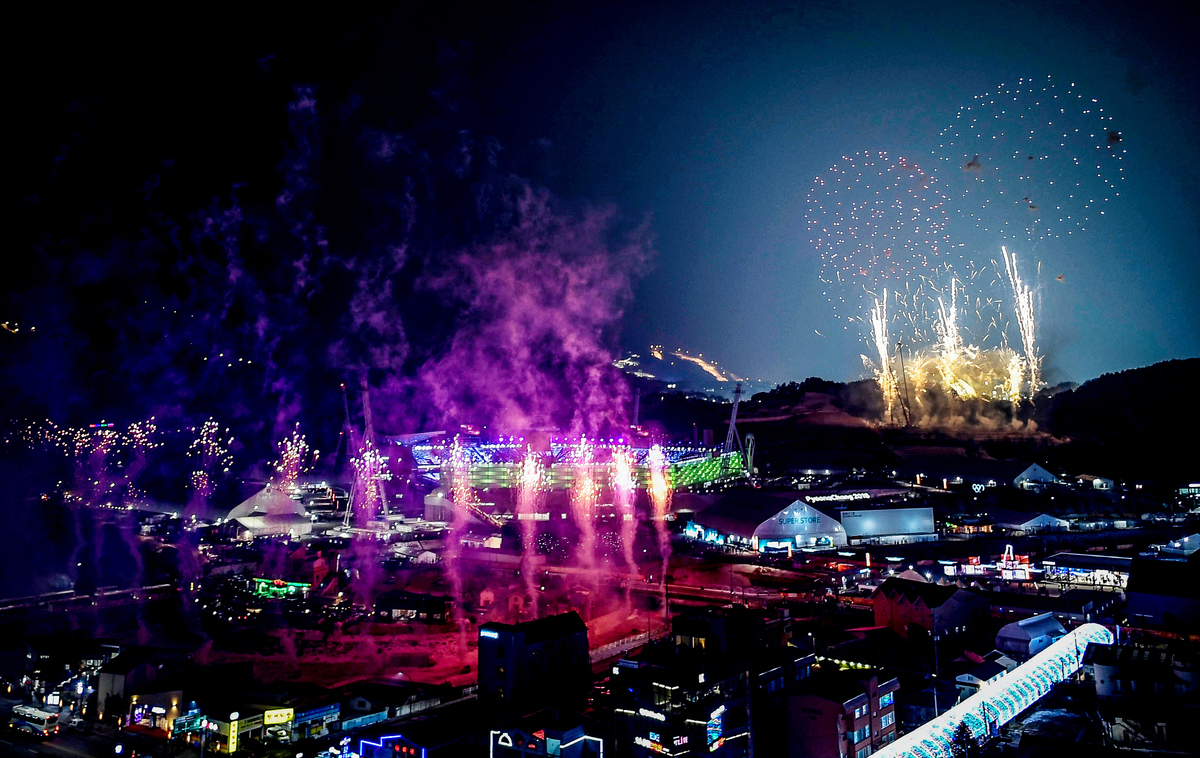 Fireworks go off at the start of the opening ceremony of the Pyeongchang 2018 Winter Olympic Games.

The opening ceremony of the Winter Olympics kicked off on Friday — at 8 p.m. in South Korea and at 6 a.m. ET in the U.S. — with 2,900 athletes from 92 countries gathering to compete for 102 medals in Pyeongchang.

How To Watch The 2018 Winter Olympics

The Winter Games run from Feb. 9-25. The Paralympics will use many of the same facilities, with 670 athletes competing from March 9-18.

Our recap of the big event:

The themes of the ceremony are harmony and convergence, and passion and peace.

The ceremony begins with the type of spectacle we've learned to look forward to at the Olympics, with artful projections on the floor and a large troupe of costumed dancers. The action revolves around five children, local actors who live in Pyeongchang's Gangwon Province. 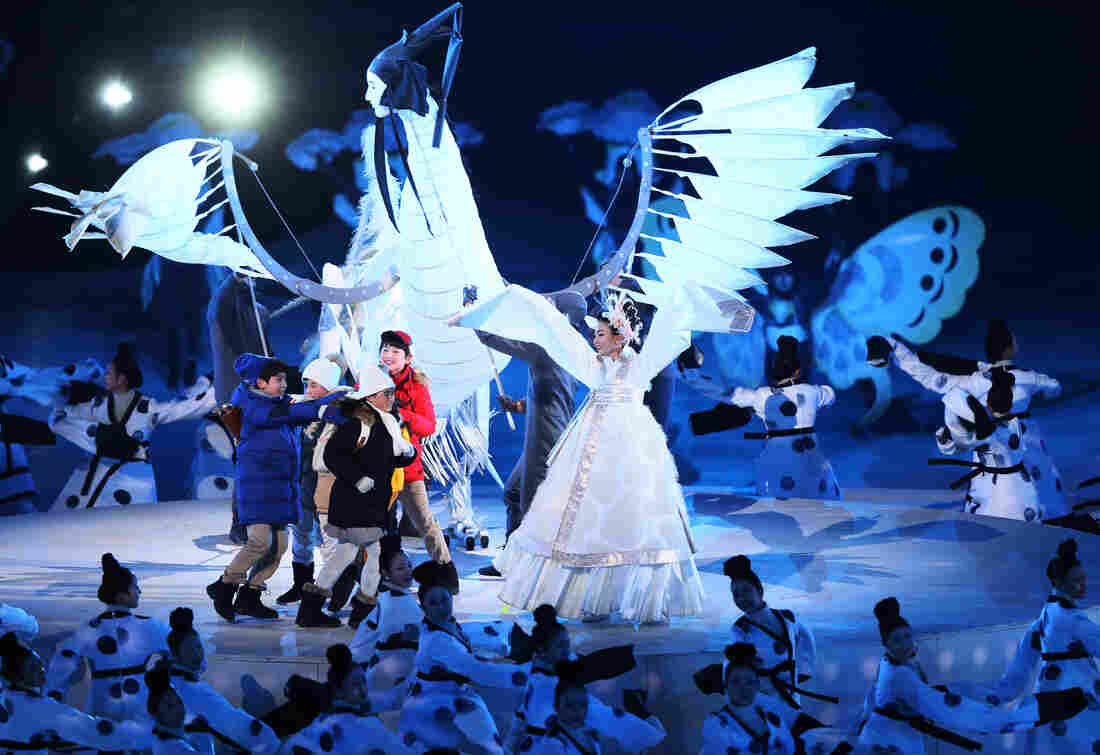 Dancers perform "The Land of Peace." The themes of the ceremony are harmony and convergence, and passion and peace. Jamie Squire/Getty Images hide caption 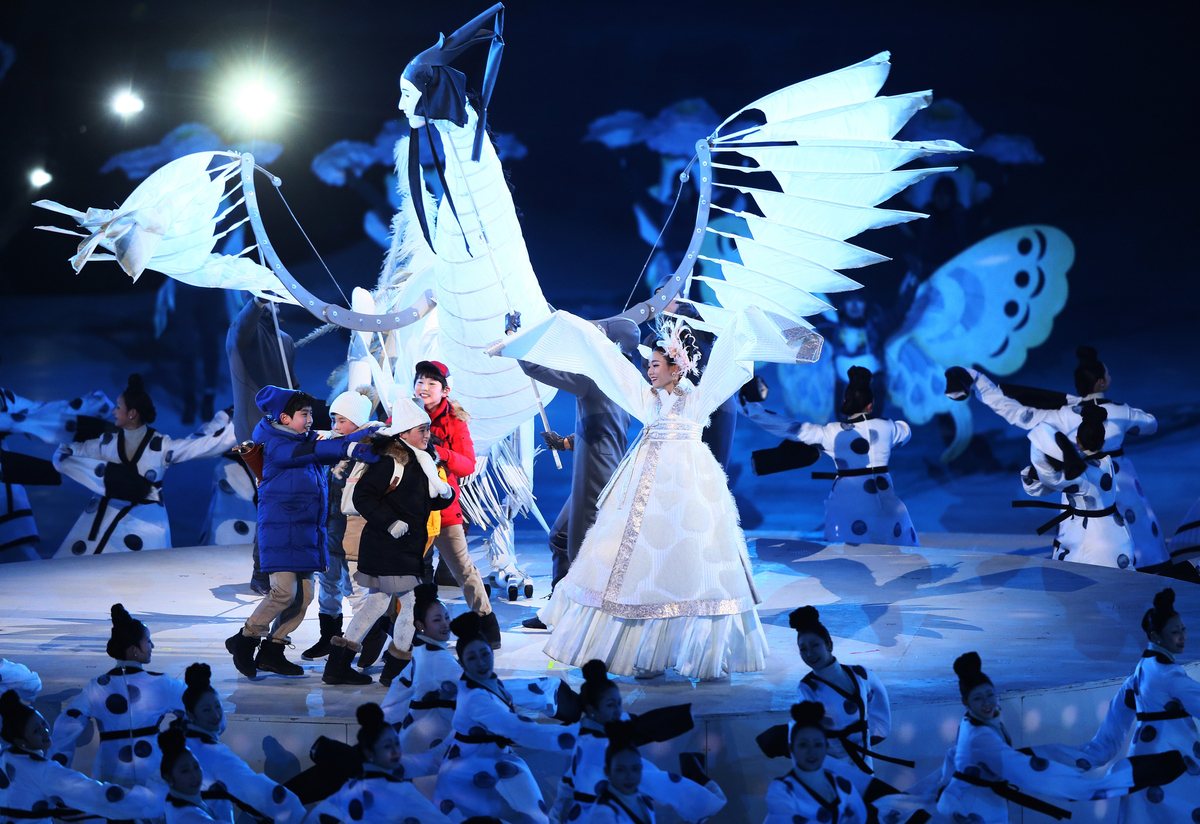 Dancers perform "The Land of Peace." The themes of the ceremony are harmony and convergence, and passion and peace.

The organizers explain: "The number five comes from the five Olympic Rings, and the names of the children's characters come from the Five Elements — fire, water, wood, metal, and earth — which are believed to make up the universe."

The shape also means there will be five different entrances to the stage. 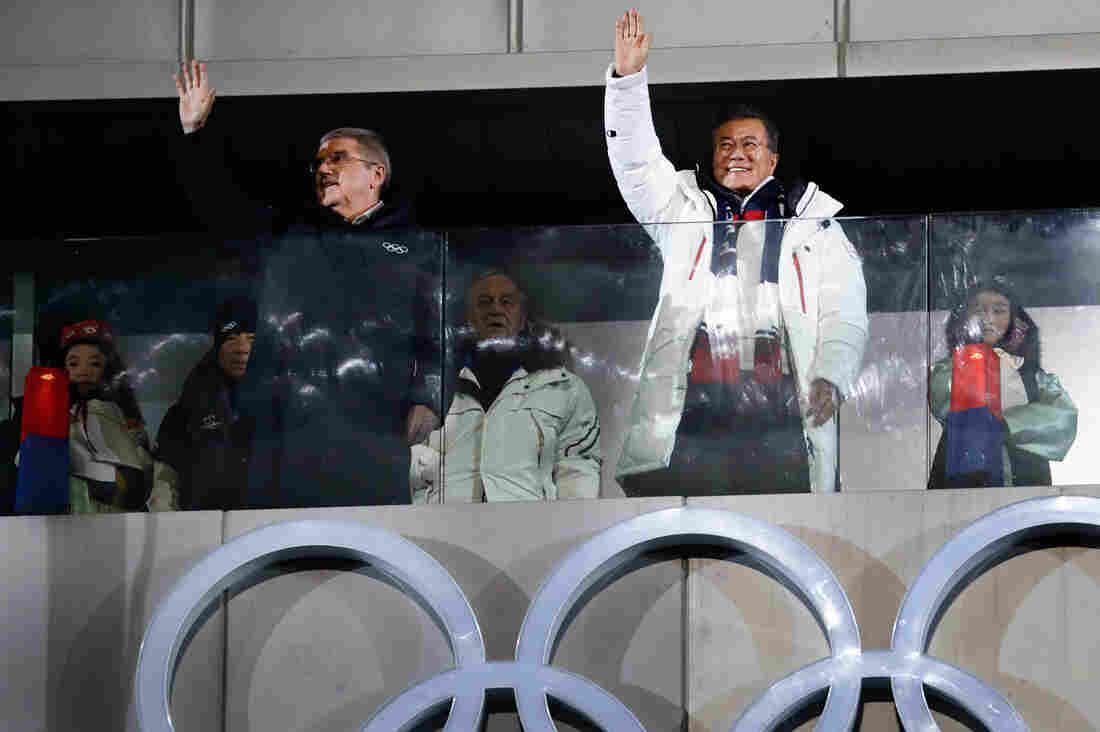 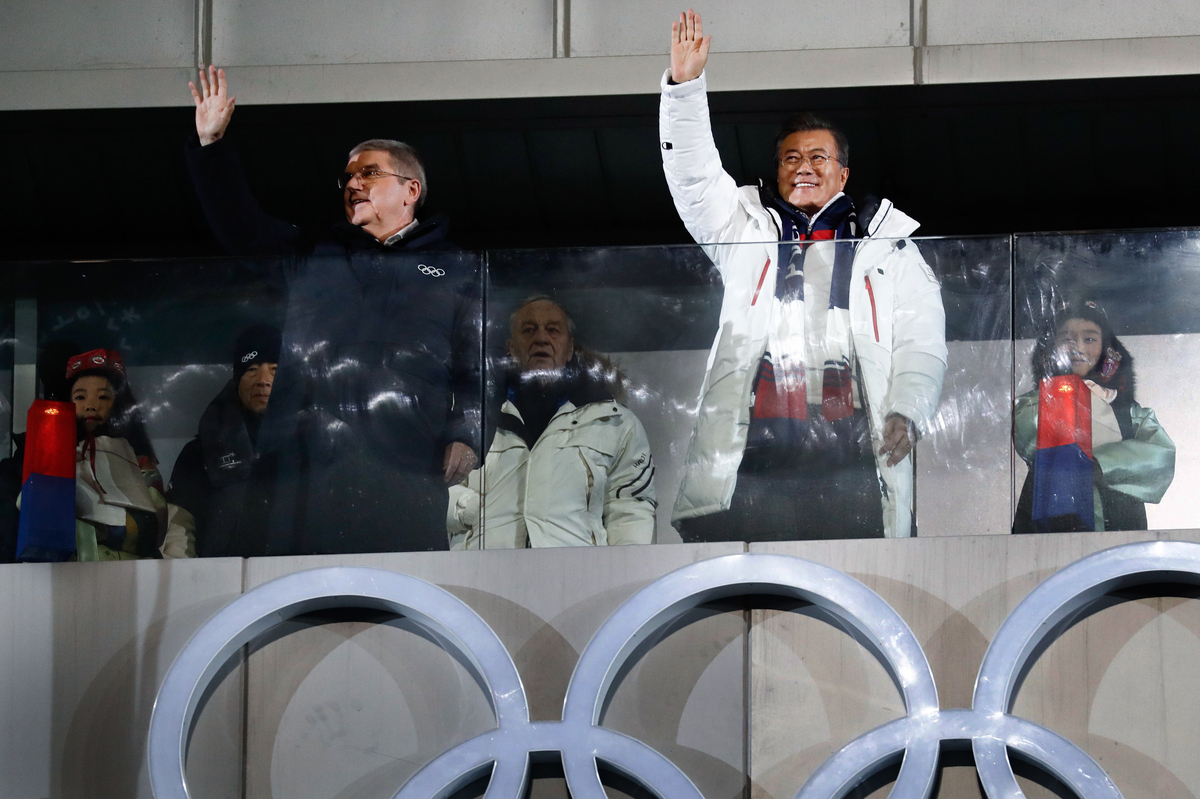 'Taegeuk: Harmony of the cosmos'

Mimicking a sort of cosmic Big Bang, the stage is empty until the sound of janggu drums spark light.

Rising through a large central circle in the stage, drummers bring the arena to life; their costumes change to blue and red — South Korea's colors.

It all culminates in the presentation of the Korean flag, known as Taegeukgi. The organizers say: "The taegeuk, the interlocking semi-circles in the flag, represents yin and yang, the blue semi-circle symbolizing yin and the red yang." 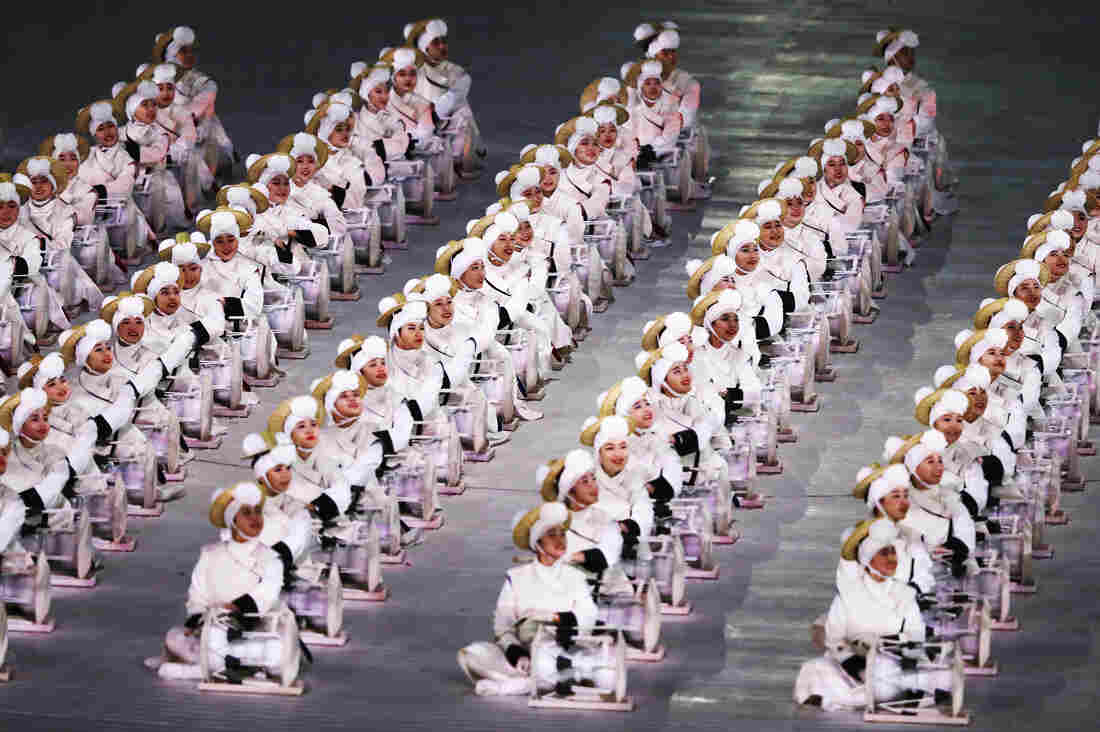 Olympians Next Door: Where America's Winter Olympic Athletes Come From

The Rainbow Choir — 75 children, in a group that was founded in 2009 — sing the national anthem to send out a message of harmony through their music. The ceremony's program states, "There are many multi-cultural families in Korea from international marriages."

About the costumes, from the program: "Wearing a pungcha, a type of traditional Korean winter hat, the flag bearers will be dressed in a traditional overcoat called dopo or a long jacket called durumagi. A five-color cord secures the dopo around the waist, and the extra fabric added to their back of the dopo with a cord will add more gaiety as they carry in the flag. "

By tradition, the team from Greece, the home of the original Olympics, enters first; the host country's team enters last. In this case, South Korea's athletes enter alongside their counterparts from North Korea, walking beneath a flag of unity bearing the shape of the Korean Peninsula. 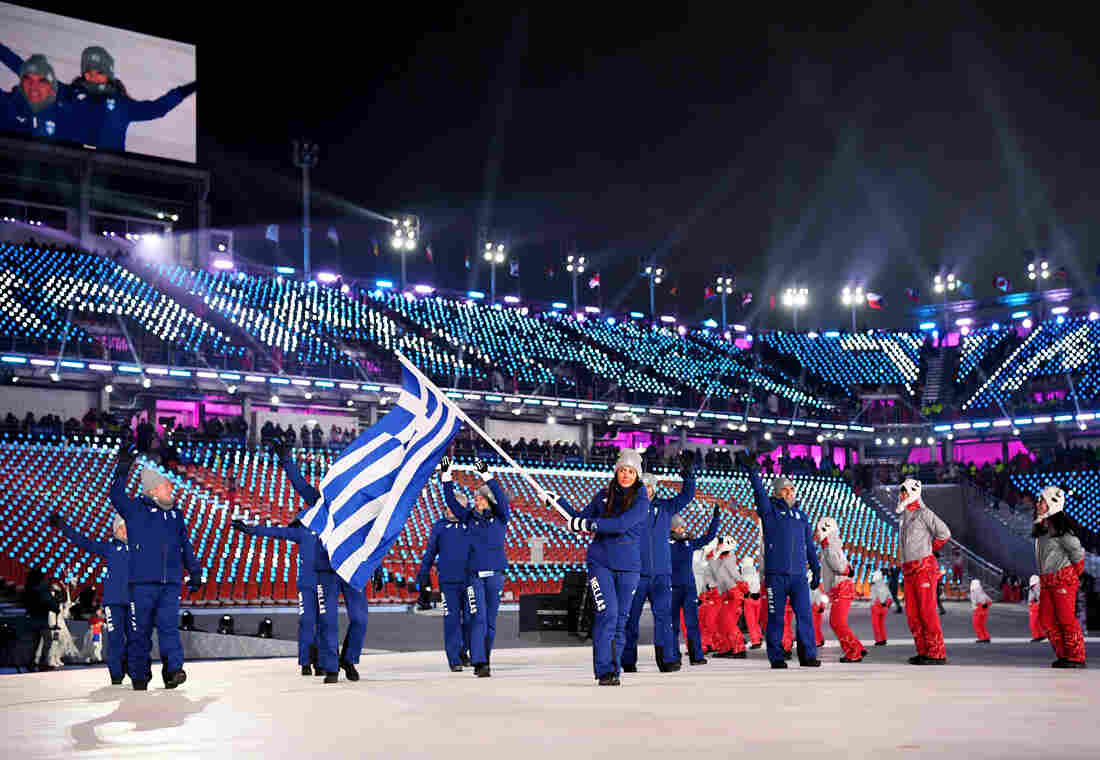 The other 89 nations enter according to the Korean alphabet – a situation that has led to confusion among some viewers in the past, as they wonder at the order.

The U.S. team enters after all the countries whose names begin with "M" — so, after Malta and Mongolia but before Bermuda and Belgium. The Americans are the 26th delegation to enter the Pyeongchang Olympic Stadium.

Montenegro's team entered to "Gangnam Style." If you can't wave your hands to that song, you don't belong at the opening ceremony of the Olympics. We can see that Montenegro gets it. South Korea's most popular hit continued to play as Team USA marched out.

If you're wondering: there are 2,900 athletes in Pyeongchang for the Winter Olympics.

Erin Hamlin shocked many when she won bronze at the last Winter Olympics in Sochi – the first time an American singles luger had ever won a medal. Now she's a two-time world champion — and in her fourth Winter Games, Hamlin she leads the U.S. team into the Olympic Park. 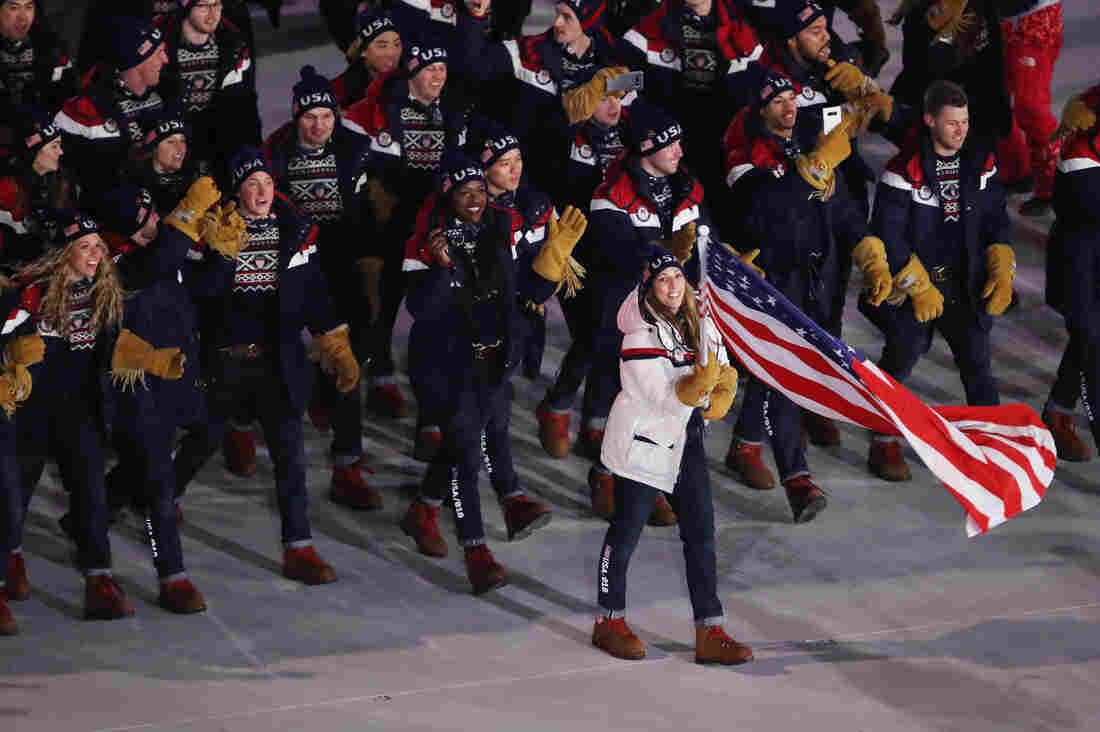 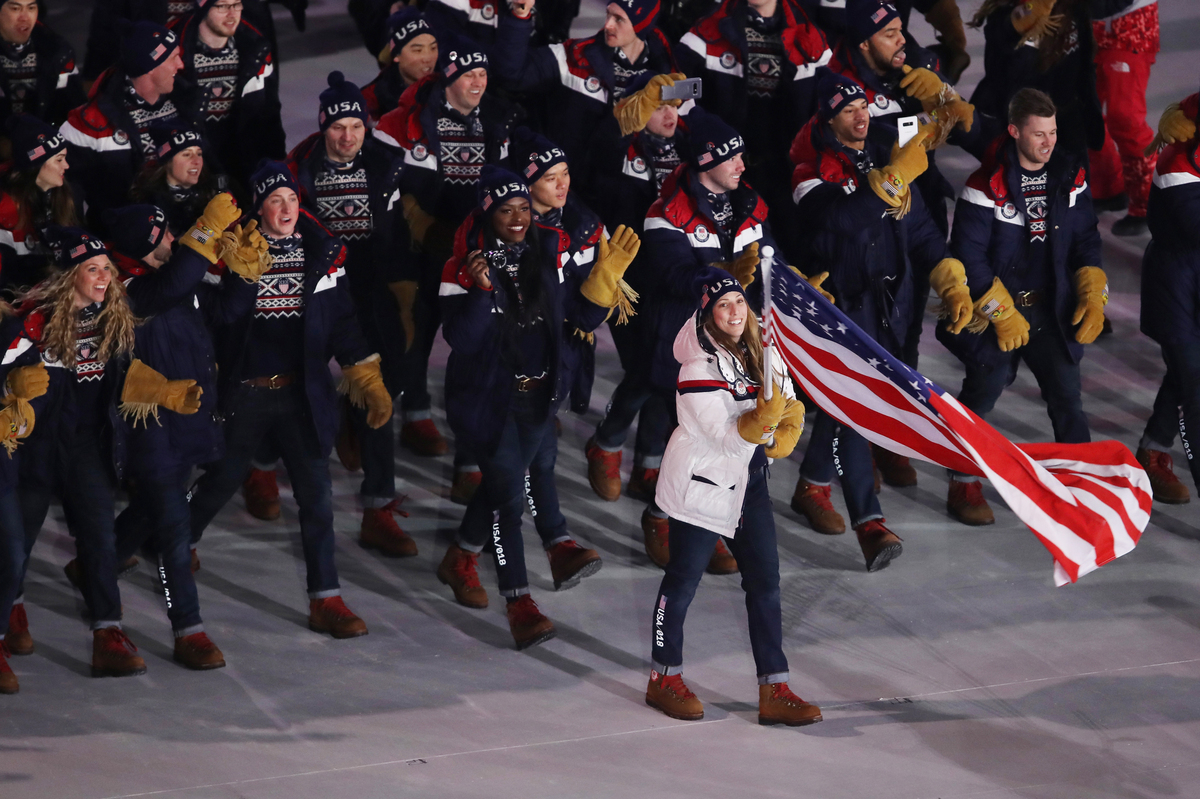 Flag bearer Erin Hamlin of the United States leads the team in the Parade of Athletes.

A native of Remsen, New York, she says she's retiring after these games.

A pair of impersonators – dressed to mimic President Trump and North Korea's leader Kim Jong Un – caused a big stir right behind where our colleague Melissa Block was sitting.

The pair were escorted out of the section they were in. It wasn't clear if they were being ejected.

This ceremony has many high-profile visitors – including Vice President Pence and Kim Yo Jong, the sister of Kim Jong Un. The North Korean delegation's high status also brought a rare and unexpected moment: a public handshake between the North Korean leader's smiling and stylishly dressed sister and South Korea's President Moon.

'Arirang:  The river of time'

An older gentleman sings "Jeongseon Arirang" – a traditional song that has its roots in this region. This part of South Korea prides itself on its natural beauty, and that's featured along with this song in the form of natural scenes – and lots of buckwheat flowers in bloom.

The five children reappear, and this time they're crossing the river on a raft – but then a storm befalls them. This evokes Korea's "Miracle of the Hangang River," where, the program tells us, "despite ordeals and trials, the buckwheat flowers rise up again to create the lovely and bountiful field. As they head towards a glittering modern city, the children watch fireflies rise up from the buckwheat flowers."

This scene is meant to portray Koreans' resilience and strength.

All for the future

Where there are children, there's often talk of the future. This segment explores the future of those five kids from earlier – and South Korea's future and its technological expertise.

The children peer into their future, and — Spoiler Alert: It's all going to be OK. 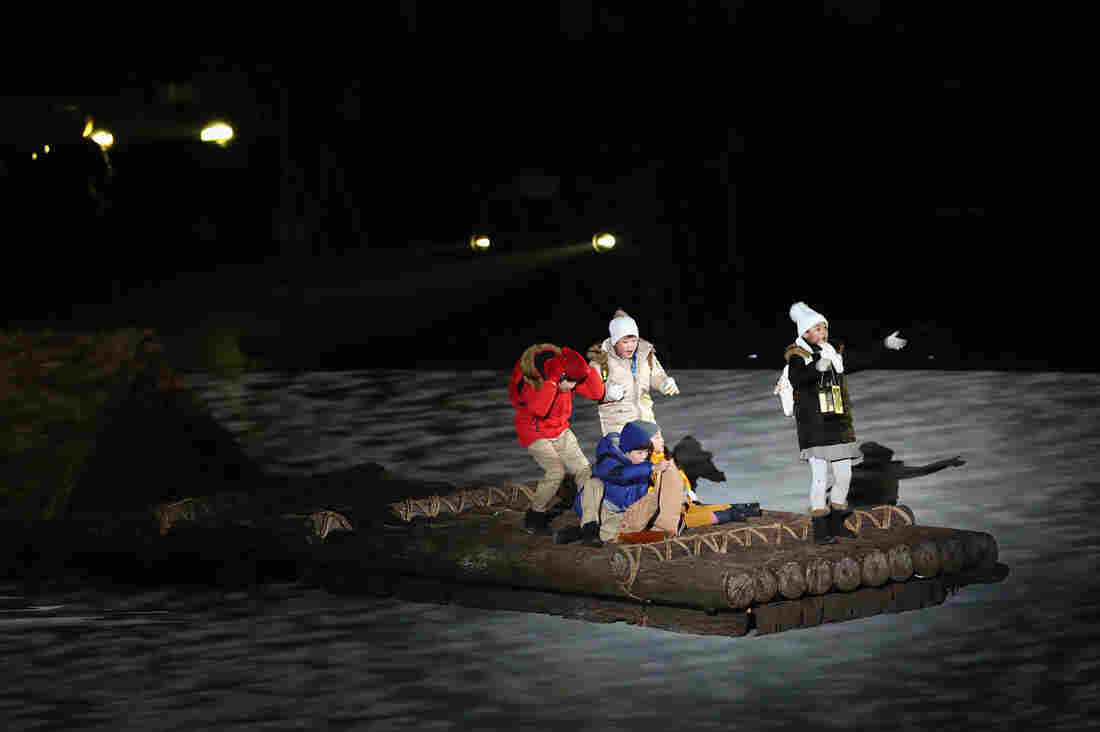 Where there are children, there's often talk of the future. The five children are crossing the river on a raft – but then a storm befalls them. Ronald Martinez/Getty Images hide caption

"After seeing a world where everyone is not only connected but also understanding and considerate of others, the five children learn a new secret to peace, one that connects the past, present and future."

Korean's President Moon and Bach speak, as does Lee Hee-beom, the president and CEO of the official PyeongChang Organizing Committee.

This is the point where Moon officially declares that the Winter Games are open – and now our thoughts turn to the Olympic cauldron. But it's not quite time, because first we need to construct a dove out of candlelight.

Roughly 1,262 people – including 1,000 residents of Gangwon Province — enter, and they're holding candles. As 27 street artists sing "Imagine," they assemble themselves to create an image of a dove. Clearly, they've worked on this.

Here's a chance for South Korea to show off its technical prowess. We see 1,270 LED candles that are controlled by wireless technology – and the audience will join in, using small Olympic Torch lights that they got in not-small bags of swag on the way in. Other items included a poncho, hand warmers, a winter cap and a drum.

The music in this portion is led by Jeon In-kwon, "a rock singer," according to the program, "who has been known for his husky voice and unique style of singing since his debut in 1979, and he was a member of the rock band Deulgukhwa. Many of his fans describe his music as comforting and even liberating."

Jeon is joined by Lee Eun-mi, a veteran singer known for crossing genres – from folk to pop and jazz. Her trademark move is to sing barefoot – thus, "she is known to her fans as 'the without shoes diva,'" we're told.

The younger pair of singers are Ha Hyun-woo, leader of the rock band Guckkasten, and An Ji-yeong, who's most often seen as part of the much-loved band Bolbbalgan4.

After bouncing around every corner of Korea on a 101-day relay, the Olympic flame is finally coming to its home for the next 16 days.

The Olympic anthem is sung by Hwang Su-mi, whose day job is being the soloist at the Bonn Opera Theatre.

Before the big moment, the torchbearers will need to reach the cauldron, up a "slope of adventure" that's not unsteep — sort of like a warped wall. It turns out to have stairs that were hard to spot. Phew. 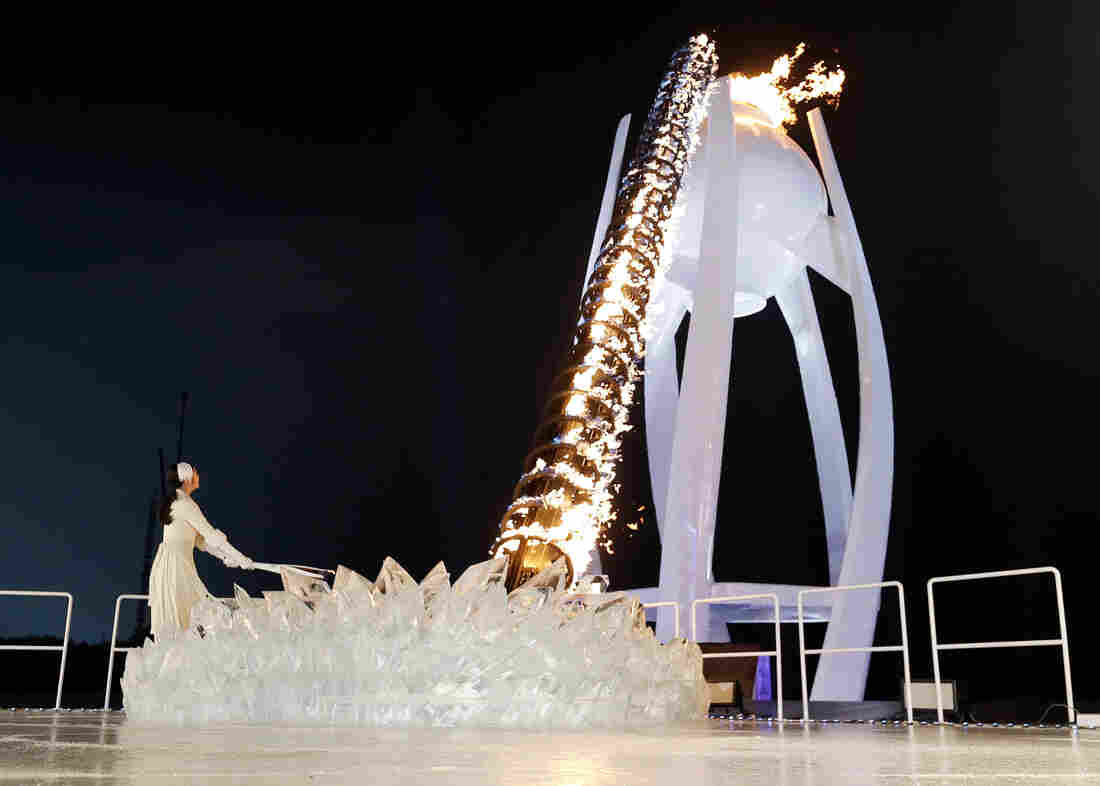 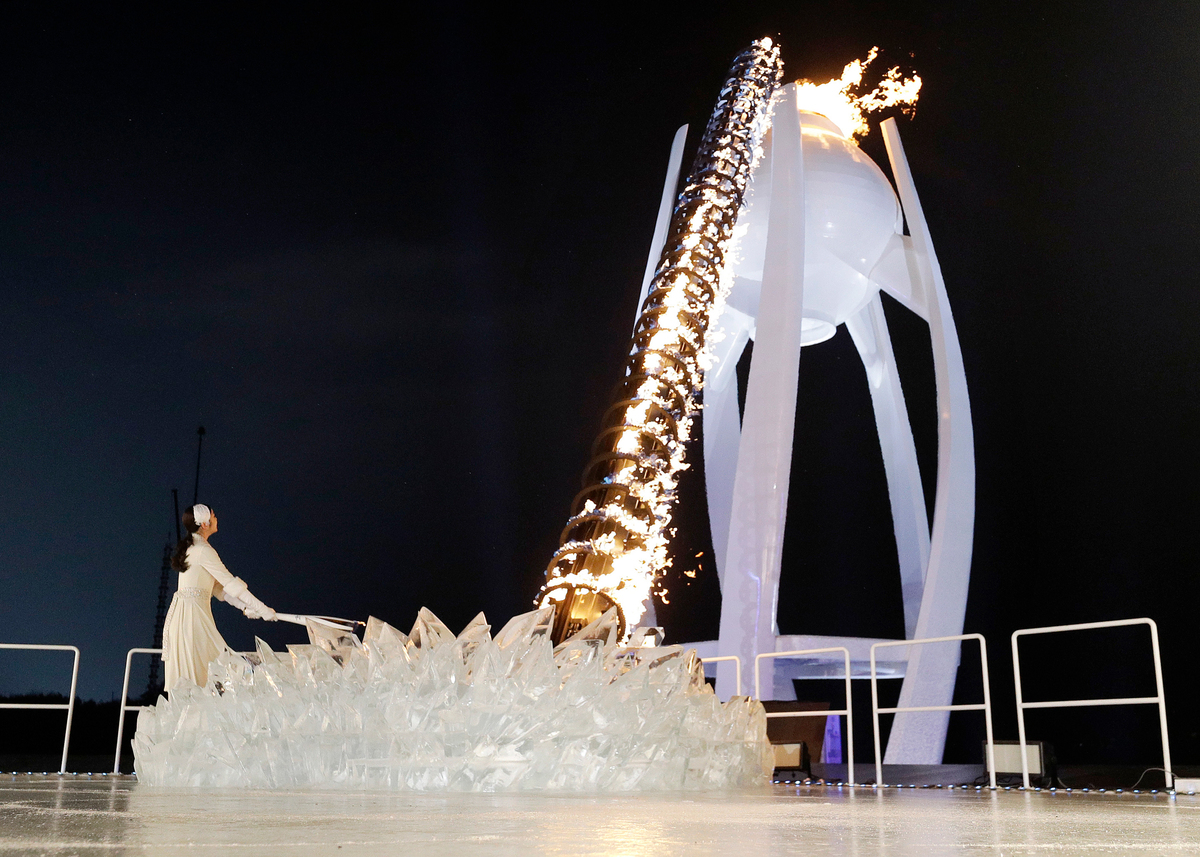 A torchbearer lights the Olympic flame.

As the final two torchbearers reach the top, we see that there's a little ice rink up above the top step of the stadium, and Kim Yuna — a beloved figure skater who lit up the ice in the past two Winter Games — is up there skating around. Kim won gold in 2010 and silver in 2014 (a narrow miss that many questioned at the time).

The Olympic cauldron is designed to recall a full moon, with a smooth white orb. That's mainly when it's not lit; it's a giant and powerful torch once the flame gets to it.

Now we know: the sight of the Olympic flame tends to drive the Dokkaebi a little wild. What are the Dokkaebi, you ask? Well, they live in the forests of Gangwon Province. And they seem to be up for anything that involves roller-skates, flames, and sparklers.

"Korean Dokkaebi are curious, fun-loving pranksters who enjoy music and dance and bring blessing and excitement to people," the program says.

They get things hyped up thusly: "Just Jerk dancers dressed as Dokkaebi enter the stage and perform b-boy dancing with flames."

The Dokkaebi also roller-skate while sparklers ignite behind their heads and whirl around, spewing fountains of white sparks. Then the sparks move to their backs as drums pound over the loudspeakers. To be clear, this is the part of the celebration that pivots from the early grace and sentiment and turns toward a boisterous welcome and the excitement of the games.

Then it's fireworks time — 20,000 of them. The highest go 1,300 meters, more than 4,200 feet, in the sky, the program says. It's a nice mix of bursting explosions and sparkling spectacle. Smoke fills a large swath of the outdoor arena, and it will trail after the crowd as they wind down staircases, lingering in the air as the Olympics begin in earnest.