Accessibility links
Korean Women's Hockey Team Presents A Unified Front As It Takes To The Ice : The Torch In many ways, the Korean women's hockey squad is the most interesting team in the world. On Saturday, they hit the world stage in their first game at the Olympics. Korea lost. It hardly mattered. 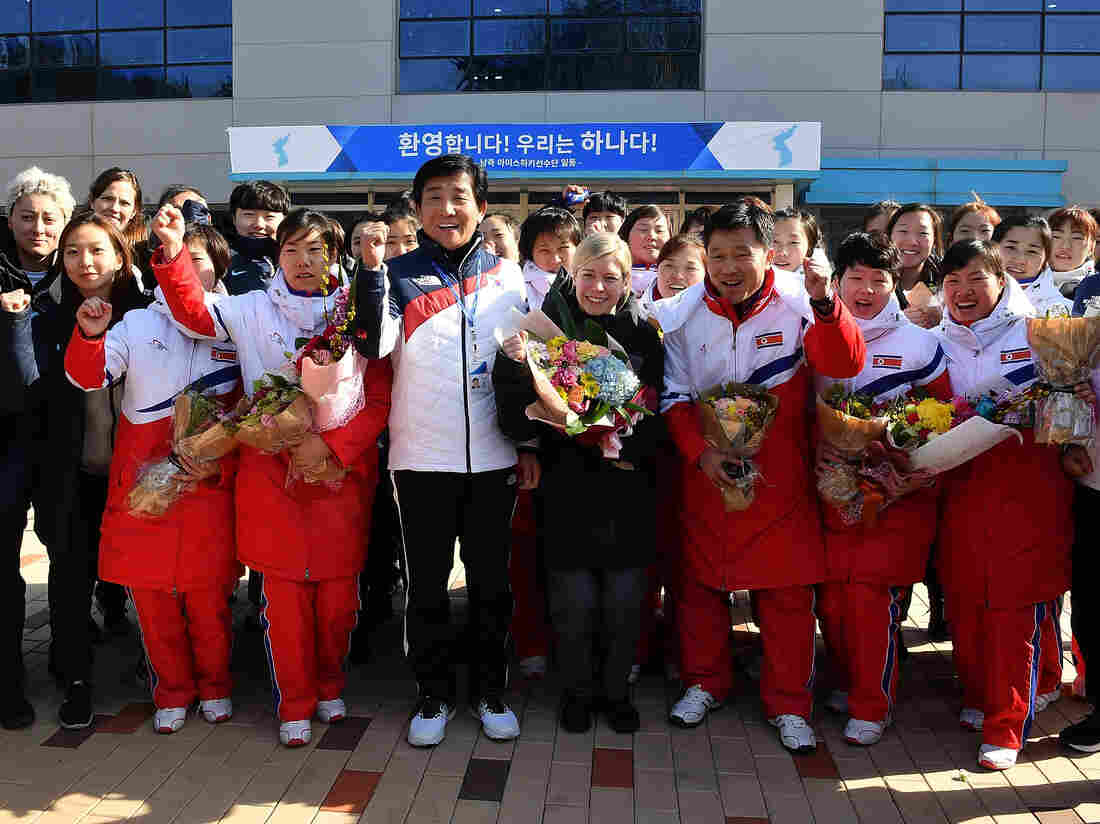 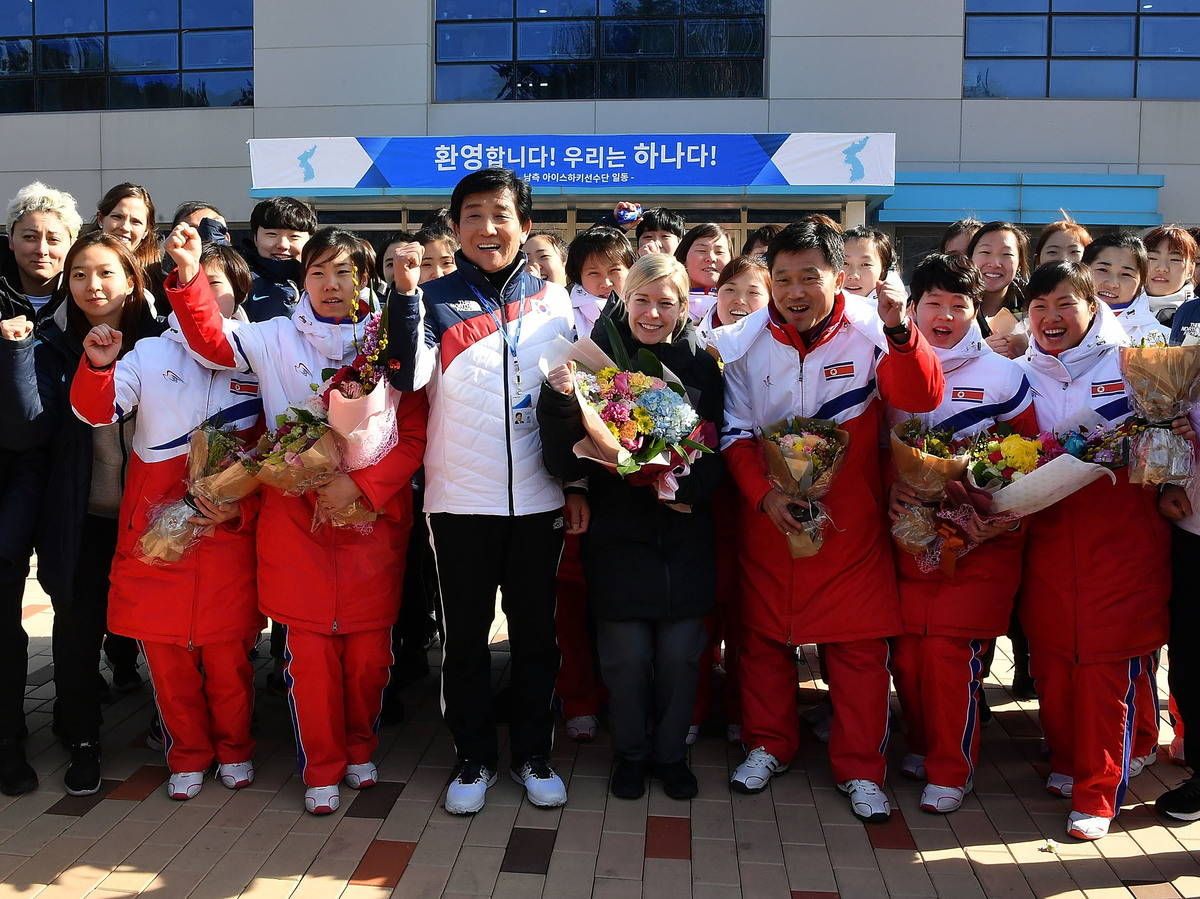 In many ways, the Korean women's hockey squad at the Pyeongchang Winter Olympics is the most interesting team in the world. And on Saturday, it got even more interesting as they played their first game that matters — against Switzerland and in front of South Korea's president, Moon Jae-in, and Kim Yo Jong, the sister of North Korean leader Kim Jong Un.

The spirit of unity and teamwork that the Korean squad has shown is proof that it's succeeding in meeting its off-ice goals. On the ice, however, the Swiss, ranked No. 6 in the world, took control early and built a 6-0 lead by the end of the second period.

The home crowd soared into cheers anytime the Koreans managed a breakaway — or, to be frank, if they touched the puck in Switzerland's half of the ice. But the Koreans didn't score, despite spending 12 minutes of the game on the power play. That didn't stop the crowd from cheering their team loudly as the final horn sounded.

And then, in a pattern that had repeated throughout this game, the North Korean cheer squad sang a song to the dwindling audience and performed their swaying moves — despite the in-house pop and rap music that blared from the speakers.

Long before this historic game began, fans arrived to take selfies and family portraits outside of the arena; children wore bouncy headpieces featuring Soohorang, the mascot of these Olympics.

It was a certainty that the thousands gathered at the Kwandong Hockey Center would erupt in euphoria if their team somehow managed to score a goal. But they didn't get many chances, as Switzerland dominated. By the end of the game, the Swiss had taken 52 shots on goal to Korea's eight. 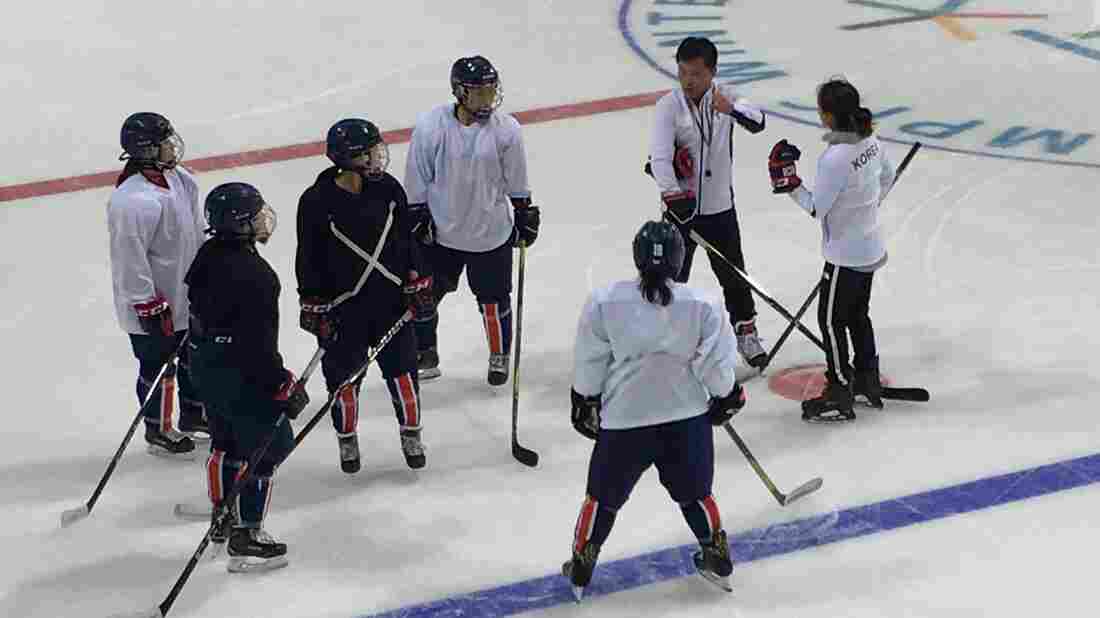 During a practice ahead of their first match in the Pyeongchang Winter Olympics, the unified Korean team wore blue and white jerseys — leaving onlookers to wonder which players were from the north. Bill Chappell/NPR hide caption 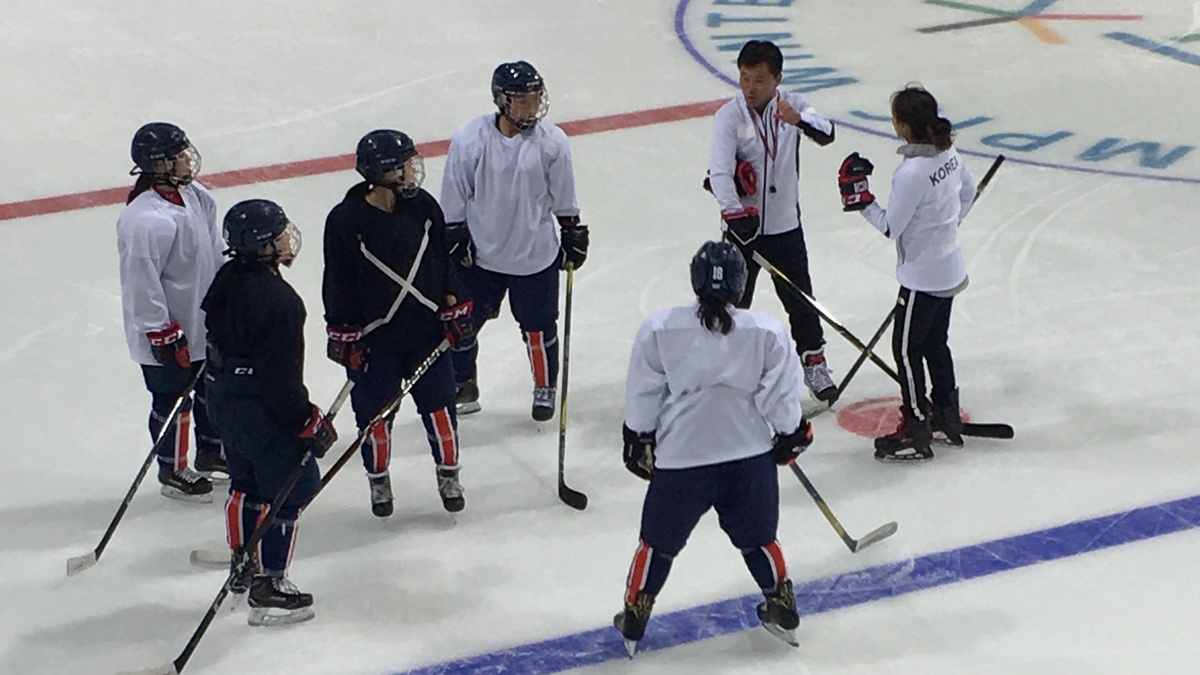 During a practice ahead of their first match in the Pyeongchang Winter Olympics, the unified Korean team wore blue and white jerseys — leaving onlookers to wonder which players were from the north.

The Korean players were jammed together on one team in January because of a political accord – and a desire by South Korea's leaders to include their northern neighbors in the Winter Games. That sentiment was on display Saturday: In addition to Kim Yo Jong, Moon also hosted Kim Yong Nam, the ceremonial head of North Korea's government. The three had also attended Friday night's opening ceremony together.

After the game ended, Moon and his North Korean guests walked to the Korean team's bench and greeted them as the players stood on the ice. Then, one by one, the players streamed past Moon and Kim Yong Nam to shake their hands.

The Korean team has sparked intense interest, particularly after 12 North Korean players joined the southern team. Being thrust onto the world stage is heady stuff for any team — particularly one whose average age is just 22. Eight of the players on the Korean team are teenagers.

With a simple name on their chests — "Korea" — the unified team was urged on by fans waving special rally flags that feature the shape of the united peninsula in light blue on a white background. Elsewhere during these Olympics, there are sure to be protests, as well: Not all South Koreans agreed with the move to shake up South Korea's women's hockey team just weeks before the Olympics began, to put the home flag away in favor of a neutral banner.

All of this has come as the women on the Korean team work to become a cohesive unit, to learn each others' strengths and preferences on the ice. They've practiced as many as three times a day this week, with a large media presence looking on at a training facility in Gangneung, where all the ice events are being held during the Pyeongchang Games.

Practicing earlier this week, the players wore practice jerseys in either solid blue or white, scrambling around on the ice as coaches called out drills and taught technique.

Inside the small barracks-like practice arena, one question was being asked by more than a dozen journalists: Where are the North Koreans? And to the team's credit, the same answer always came: They're out there, we just can't tell who's who. I was told that the team is working out in mixed groups; when asked if anyone else was holding three-a-day practices, a facility staffer couldn't name one.

The practice that day was both spirited and focused. Coaches' orders were obeyed immediately; players fired pucks around and sometimes sprawled on the ice during intense one-on-one drills. Through it all, accurate shots on goal were cheered by the whole squad.

When it was over, they worked together to corral errant pucks and put all their gear away.

Confirming the positive attitude this team projects, its coach, Sarah Murray, said this week, "We feel strangely calm given everything that is going on. The thing we were most worried about was team chemistry and right now the chemistry is good. The communication is good."

Speaking after a practice on Wednesday, Murray said she had worried that her team might splinter into groups — "But it is fantastic," she said. And she gave credit to her North Korean counterpart for helping that process.

"The head coach that they brought, he has been amazing and without him we could not be doing what we are doing," Murray said. "He is very open to suggestions."

"All the meetings are together. All the meals are together," Murray said, in comments relayed by the Olympic Information Service. "Our players are together. In the locker room, they mix and talk. This is our family and this is great."

Acknowledging that the team's composition was the result of a political statement, Murray said that now the Olympics have begun, it's time to compete as a team.

The Korean team's goal is simple: advance out of their four-team group (which includes the Swiss along with Sweden and Japan), and keep playing together.

The hockey players' task of blending cultures extends beyond the Korean Peninsula. The squad includes Americans with Korean heritage: There's Randi Griffin of North Carolina, whose jersey will bear her Korean name, Heesoo; and Marissa Brandt of Minnesota, who plays under the name Park Yoonjung — and whose sister, Hannah, is on the U.S. hockey team. There's also Grace Lee, a high school player from Superior, Colo., who competes here as Jingyu Lee.

Here's how Griffin recently described her first exposure to South Korea's hockey scene, back in the summer of 2015:

"[We] played in this little summer league, which was just three teams. The age range was, like, 13 to 40. And this was literally all of the Korean hockey players in existence. And I think for all of us, it was this combination of a great hockey experience but also a really cool cultural experience."

The Korean roster also includes Canadian college player Danelle Im, as well as Caroline Park, who grew up in Canada and played hockey for Princeton University. Also on the squad is goalkeeper Genny Kim Knowles — a 17-year-old who is a native of Vancouver but who plays hockey for her high school in Lawrenceville, N.J.

If it sounds like the South Korean team went looking for female hockey players to suit up for their squad, that's because they did.

Despite their No. 22 world ranking in 2017, the South Korean team enjoys an automatic Olympic berth as the hosts. And in recent years, its staff looked far and wide to fill out the roster. It turns out that another source of players was just 40 miles or so from Pyeongchang — and across the DMZ in North Korea.

On Friday night, the North and South Koreans walked together in Pyeongchang Olympic Stadium. On Saturday, they'll hit the ice as a unified team.