Accessibility links
Maame Biney Came To The U.S. From Ghana At Age 5. Now 18, She's An Olympic Speedskater With Team USA : The Torch Born in Ghana and raised in the Washington, D.C., suburbs, Biney is the first African-American woman to qualify for a U.S. Olympic speedskating team. Her father is her biggest fan. 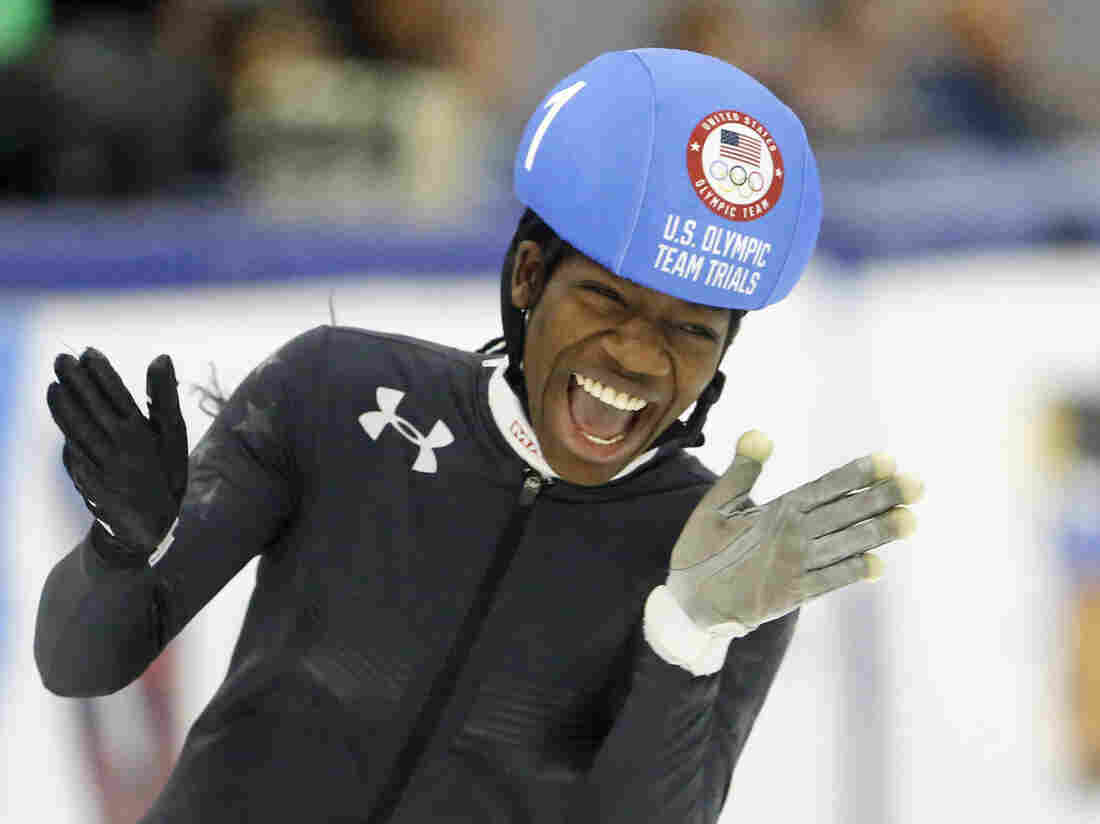 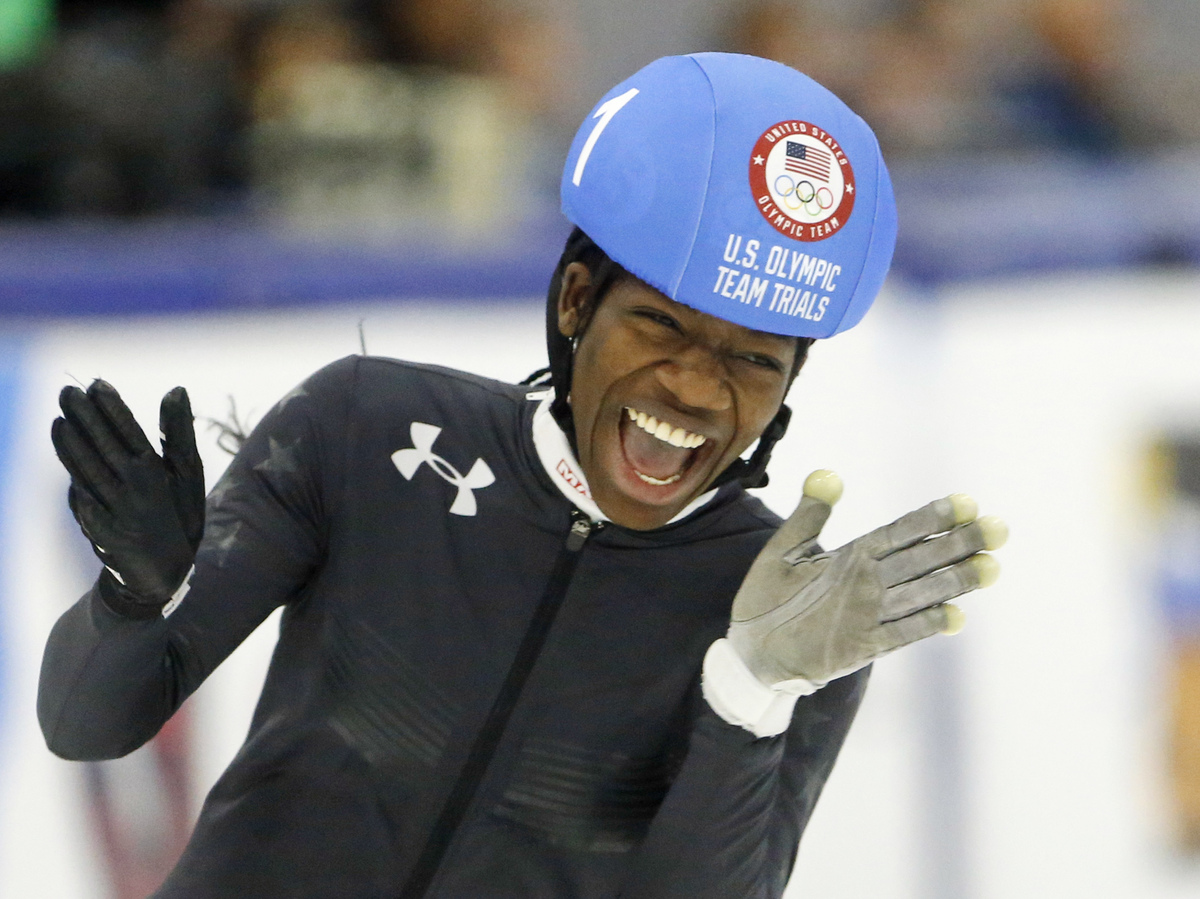 The short track speedskater just turned 18; she's not even out of high school. But she is already one of the biggest U.S. names at the Winter Olympics.

When Biney won the 500-meter finals at team trials in December, with a personal-best time of 43.161 seconds, she became the first African-American woman ever to qualify for a U.S. Olympic speedskating team. (Twenty-five-year-old Erin Jackson is the second, qualifying in long track.) She is competing this week in the women's 500- and 1,500-meter races in Gangneung, South Korea.

Biney has a goofy giggle and an electric, nonstop smile. Her game face, though, is something else.

And with that, realizing she has blurted something impolitic, she covers her face with her hands and collapses in laughter.

Just about everything Biney says ends with her irrepressible teenage giggle. She has a built-in joyfulness that charms everyone she meets, including U.S. team head coach Anthony Barthell. 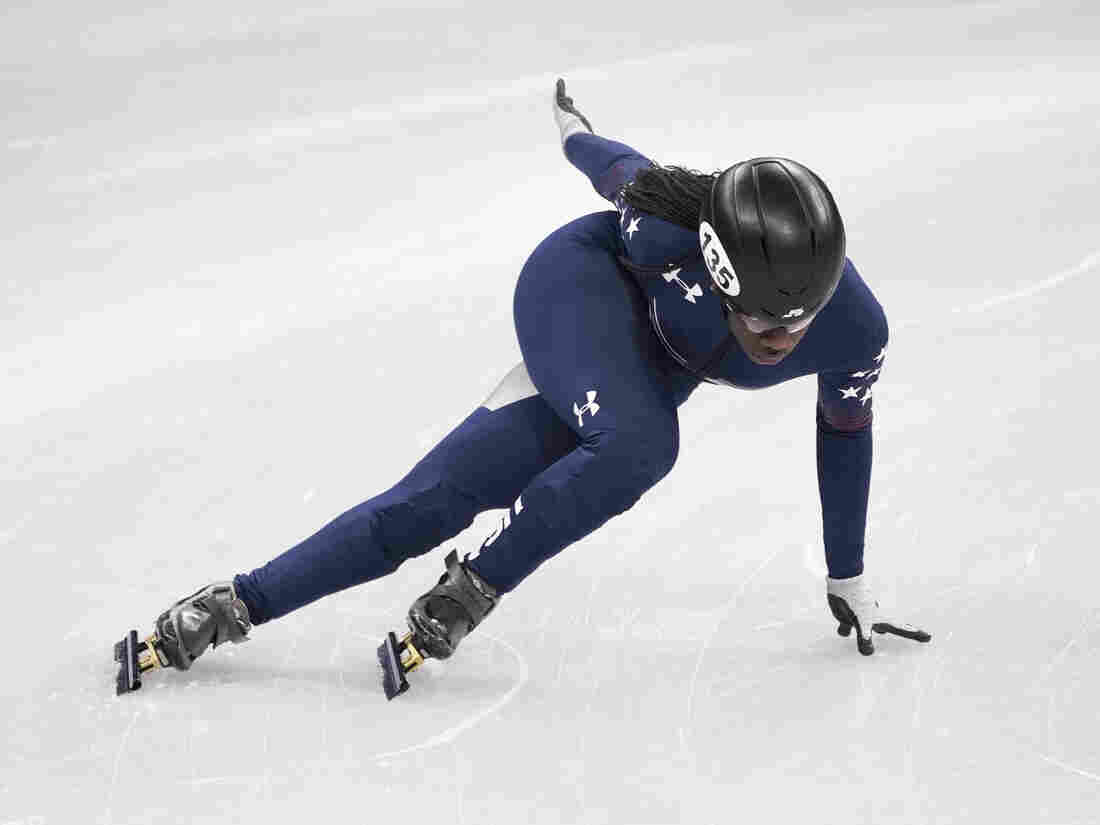 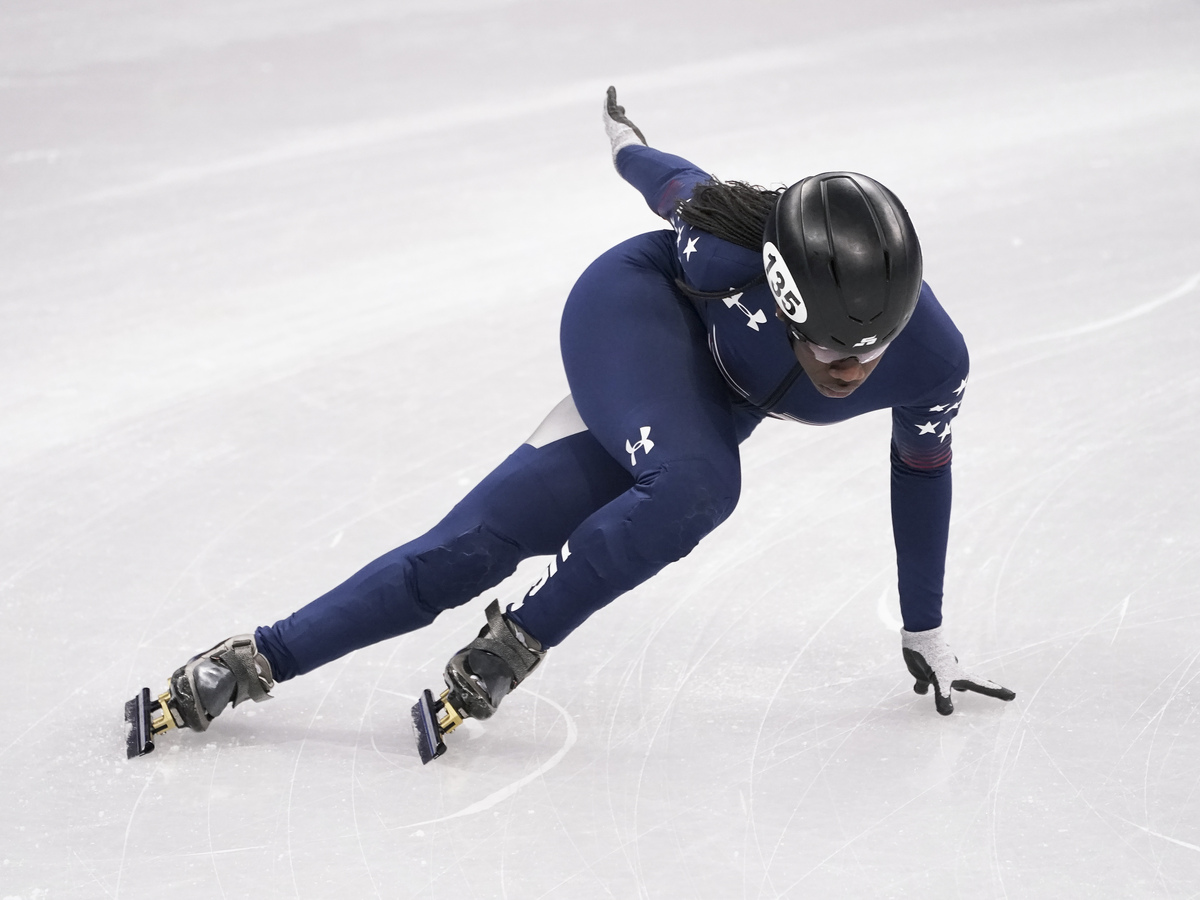 Biney skates during a short track speedskating training session in Gangneung on Feb. 6.

Barthell first saw Biney skate when she was 11, and even then, he realized this girl was special.

"Explosiveness?" he says. "She has a ton of that."

Biney has the speed and power of a sprinter. It's her powerful start — thighs like pistons, arms pumping — that makes her so formidable in the 500-meter race.

But ask Biney what makes her great in short track, and she demurs.

"I wouldn't exactly call myself great," she says. "I'll just call myself, like, in there, in the little mix!"

That "little mix," though, is brutal.

Short track speedskating demands smart, aggressive strategy as the skaters jockey for position on their 111-meter oval track, leaning into tight corners, zooming at speeds up to 30 miles an hour. A false move will send them crashing into the pads.

A Short Track To The Olympics For Washington, D.C.-Area Speedskaters

"I like to call myself fierce," Biney says. "Fierce and strong and — just go out there!"

Too fast for figure skating

Biney took an unlikely path into her sport. She was born in Ghana, where — her father, Kweku, jokes — their only use for ice is to chill beer.

Kweku Biney immigrated to the U.S., settling in the Washington, D.C., area. Maame came to visit him when she was 5. She ended up staying; her mother and brother still live in Ghana. 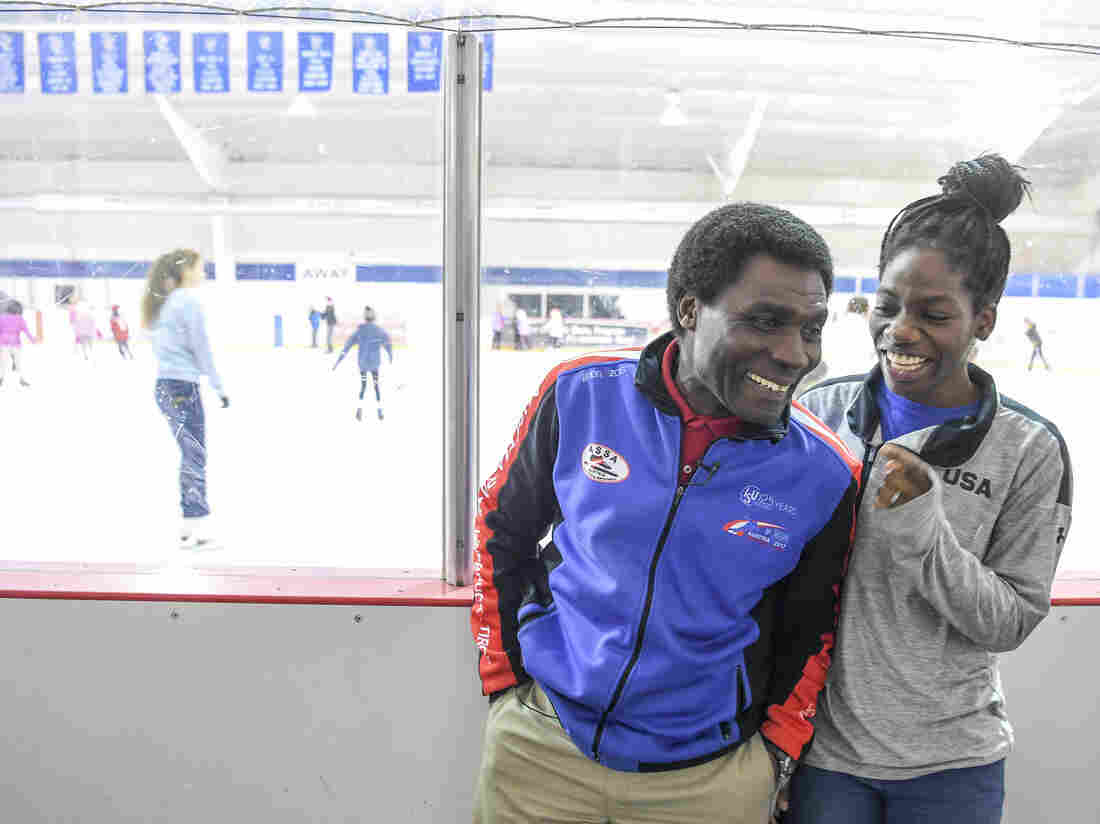 Biney laughs with her father, Kweku, in December. After visiting from Ghana at age 5, Maame stayed with him in the U.S. Her mother and brother still live in Ghana. The Washington Post/Getty Images hide caption 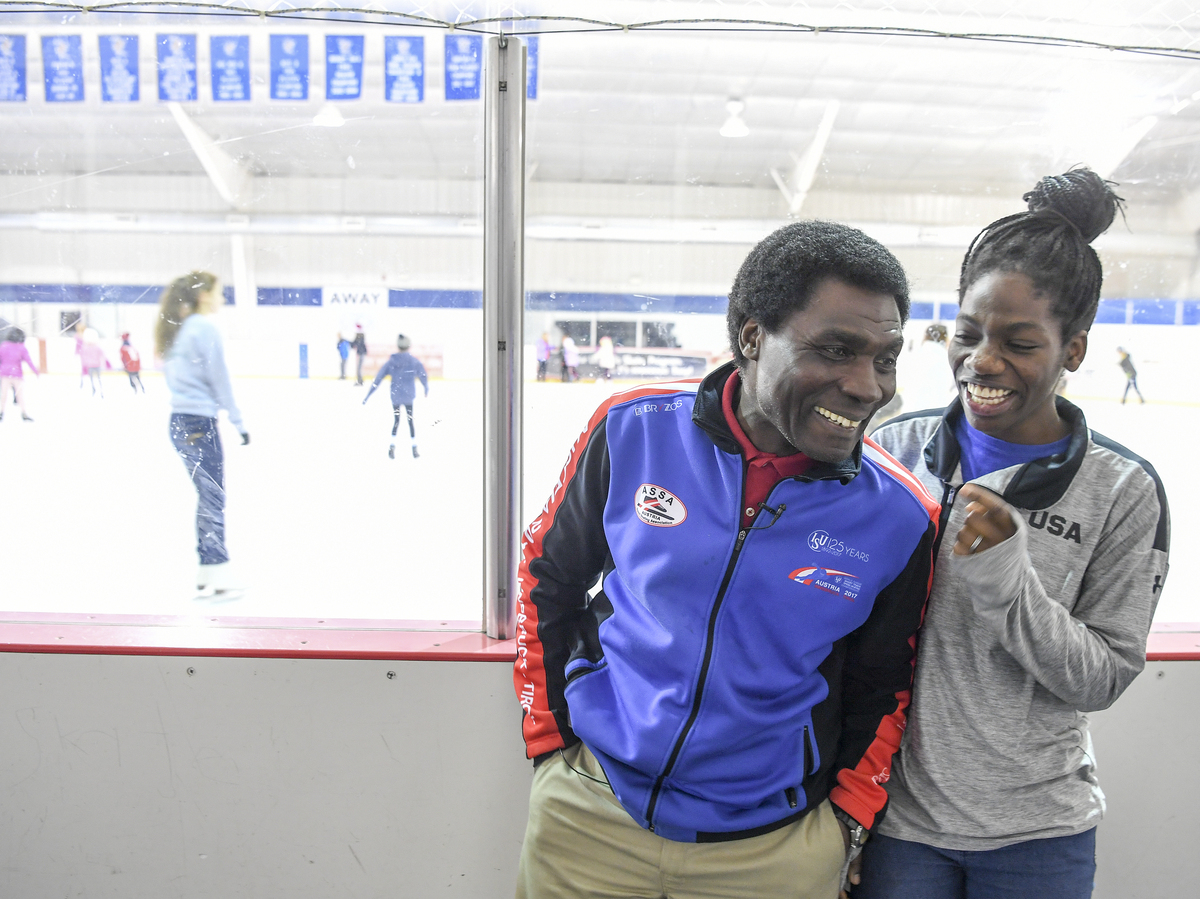 Biney laughs with her father, Kweku, in December. After visiting from Ghana at age 5, Maame stayed with him in the U.S. Her mother and brother still live in Ghana.

One day, driving through the Virginia suburbs, her father saw a sign for a local rink that said "Learn to Skate."

Maame tried it, and started figure skating — but she was so fast, the teacher steered her to speedskating.

Kweku Biney, who for years took his daughter to her early-morning practices, will be watching from the stands when his daughter competes in the 500-meter race on Tuesday. Maame says he will be holding up the same sign he held at the Olympic trials in December.

So, just how good can this young speedskater eventually be? Barthell sees huge potential.

"Once she learns a little more finesse and being able to conserve, she's gonna be even better," he says. "I think you guys have seen only a quarter of what she has. Maybe less than that."

For now, Biney is trying to stay focused and shrug off the pressure of these games. It's hard not to feel giddy, though.

But she recognizes that her achievement is bigger than herself.

"That means I get to inspire other kids in the United States, maybe all over the world," she says, "to just go out there and do what you love, because you never know! You just might accomplish your goal."