Accessibility links
Olympic Organizers Face Blowback Over How They Handled High Winds : The Torch The women's giant slalom race was postponed because of adverse weather conditions — but a women's snowboarding event moved forward, resulting in a number of crashes and falls.

Olympic Organizers Face Blowback Over How They Handled High Winds

Olympic Organizers Face Blowback Over How They Handled High Winds 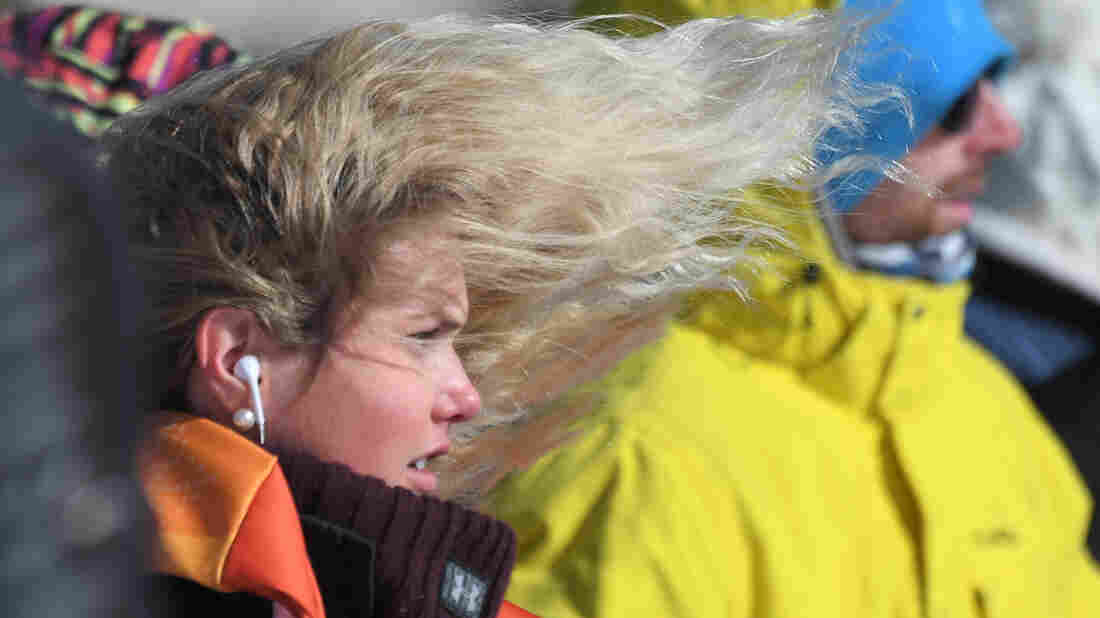 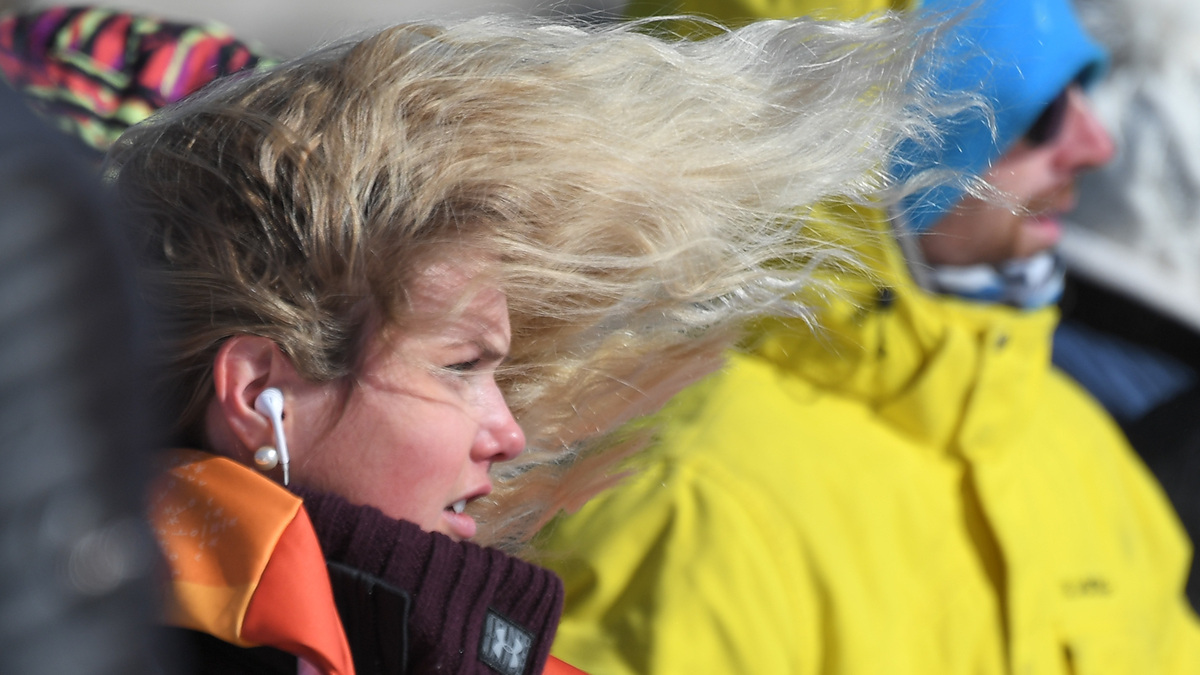 Norway's Silje Norendal's hair blows in the strong wind during the women's snowboard slopestyle final event at the Phoenix Snow Park during the Pyeongchang 2018 Winter Olympic Games on Monday.

Big air. Big victories. Big emotion: They're all par for the course at any Olympics.

Big winds, on the other hand, are a big problem.

Over the past few days Pyeongchang, home of the 2018 Winter Games, has seen wind gusts up to 45 mph — more than enough to wreak havoc with winter sports that remain on the ground, let alone those where athletes fling themselves into the air.

The high winds prompted the postponement of the women's giant slalom race, a major downhill event.

But the International Ski Federation, or FIS, still sent female snowboarders to compete in the slopestyle event — a decision that has been much criticized after the event, as NPR's Melissa Block reported from Pyeongchang.

"And the slopestyle snowboarders — who fly through the air off jumps and rails — took a pounding. More than 40 of the 50 runs ended with falls.

American Jamie Anderson fared the best, winning gold for her second straight Olympics. ... Other Olympians, though, said the race was dangerous, and should have been postponed. Austrian Anna Gasser told reporters, 'We tried to speak to officials but the Olympics put us under pressure to do it today.'

"And Norwegian Silje Norendal said, 'All I wanted to do ... was sit up top and cry.' She finished fourth."

NBC published a compilation video of women crashing after big jumps in the "challenging weather conditions," as the network put it.

Sports commentators and fans have shared the athletes' concerns about their safety.

There were no serious injuries in the park on Monday, but the risk was present, writes Jeff Passan for Yahoo Sports:

"The whipping wind — the same wind that prompted the International Ski Federation earlier in the day to cancel an alpine-skiing event — flung snowboard riders about the course at Phoenix Snow Park and impelled others simply to pull up before jumps, lest they subject themselves to shattered bones or shredded ligaments. ... The riders were convinced their well-being was sacrificed to the altar of the television networks that pay billions of dollars to program the Olympics."

Australian snowboarder Tess Coady tore her ACL on Sunday, in a training crash she blamed on high winds, The Guardian notes.

Postponing the high-profile skiing event, but not the snowboarding event, also pokes at long-standing resentments between the two snow sports. 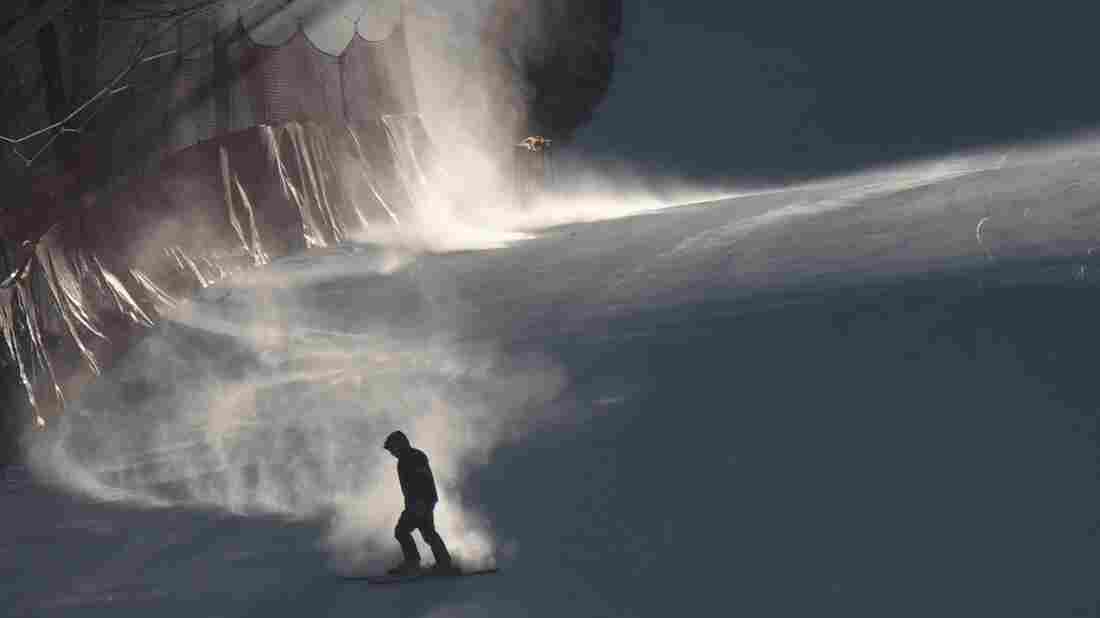 A crew member skis slowly down the slopes after the Women's Giant Slalom was canceled on Monday because of strong winds at the Jeongseon Alpine Center. Martin Bernetti/AFP/Getty Images hide caption 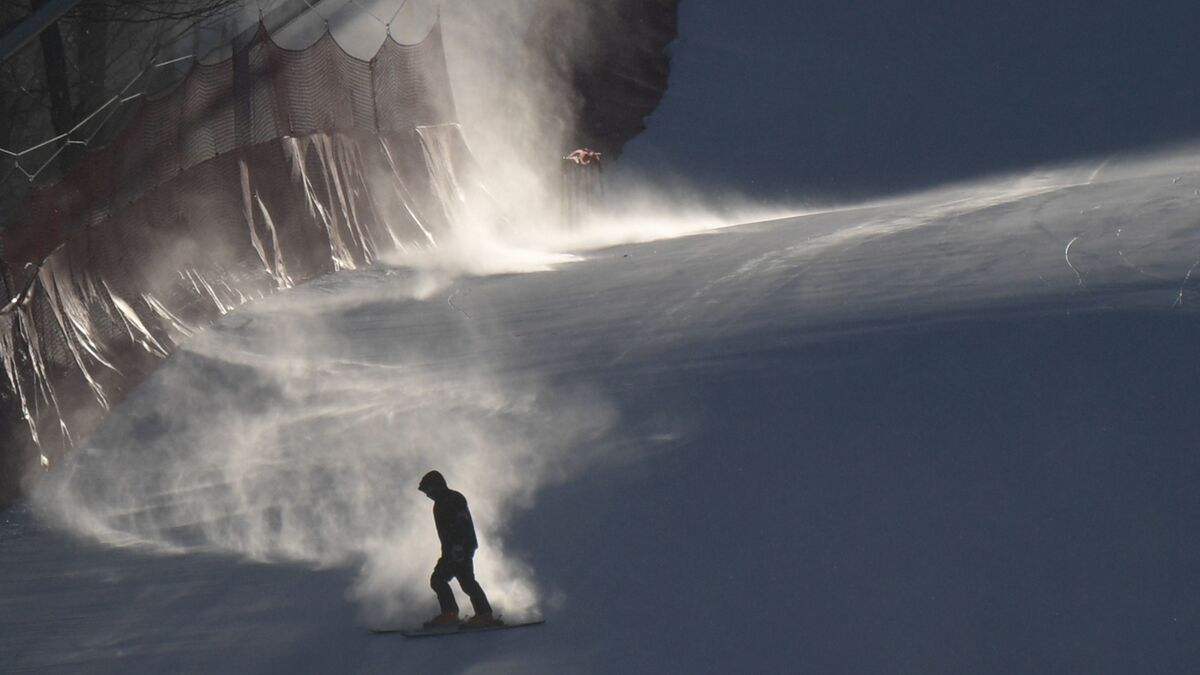 A crew member skis slowly down the slopes after the Women's Giant Slalom was canceled on Monday because of strong winds at the Jeongseon Alpine Center.

"For snowboarders convinced that their sport will always be treated as an afterthought by FIS, they've got plenty of ammunition today," Barry Petchesky wrote at Deadspin.

Then there's the question of simple fairness. The intensity of the wind ebbed and flowed, causing British athlete Jenny Jones to call it a "total lottery," as the Guardian reports:

"Britain's Aimee Fuller, who finished 17th after crashing on her second run, described conditions as among the [worst] she had ever encountered, saying it was like a sailboat under her board. 'Unfortunately it wasn't the best day for our sport,' she added. 'We're flying over 30 metre [100 foot] jumps and if it gusts you're going to go down. Some people got lucky and I didn't.'

"And Austria's Anna Gasser, who entered among the favourites but finished 15th, decried it as a 'lottery' before criticising the FIS for their decision. 'I don't think it was a fair competition and I'm a little disappointed in the organisation that they pulled through with it.' "

And finally — if safety, intersport anxieties and an even playing field weren't enough — there were criticisms over the limitation the weather put on a still-developing sport.

Rachel Axon, writing for USA Today sports, notes that the slopestyle of women's snowboarding has "progressed dramatically since it made its debut in Sochi. ... Not that anyone would know that from watching the Olympic slopestyle final on Monday."

Instead of pushing boundaries, the competitors were fighting to stay upright — and choosing smaller tricks that they had a better chance of landing in the wind.

Even Anderson's gold-medal-winning run was clean, but not precisely spectacular. She landed a backside 540 and a cab 540, each with a twist and a half, and one 720, or two full twists. That's less impressive than her performance at Sochi four year ago — and these days, female snowboarders are routinely landing 900s (2 1/2 twists), and even 1080s (three twists) and inverted tricks, Axon writes.

"That's the biggest shame," Canadian snowboarder Spencer O'Brien told Axon, "is that watching the ladies ride the past season and a half and to know the show we could have put on, I'm just so bummed we didn't get to do that for the world."

"I had planned on doing a better run," Anderson said after her win, as NPR's Bill Chappell reported from Pyeongchang. She was ecstatic with her victory, she said, but "it's hard. We have to be so intuitive with the weather, the course, with how you feel. ... It was really tough conditions today and a lot of people were struggling."

FIS has defended its choice, saying that the event was safe even if conditions were "challenging," AFP reports. "FIS always aims for the athletes to be able to stage their best performances, which some athletes have expressed was not the case today," the group wrote. "But the nature of outdoor sports also requires adapting to the elements."

Meanwhile, the event's race director, Roby Moresi, told Reuters that Olympic officials were told that the weather was not going to see much improvement by Tuesday.

"We played our cards. We evaluated the situation with what we had at that moment," Moresi told the wire service. "It would always be great if we could shine for the high end spectacular sport it is, but it is not always like that. Sometimes you have to adapt to what Mother Nature gives us."

Clarified a sentence to make it clear that it was women's snowboarding slopestyle that debuted in the Sochi Olympic Games.