Accessibility links
Canada Hosts A Pride House At The Winter Olympics In South Korea : The Torch Eight years after the first Pride House was created for LGBTQ athletes at the Vancouver Olympics, Canada has worked with local activists to host another one at the Pyeongchang Games. 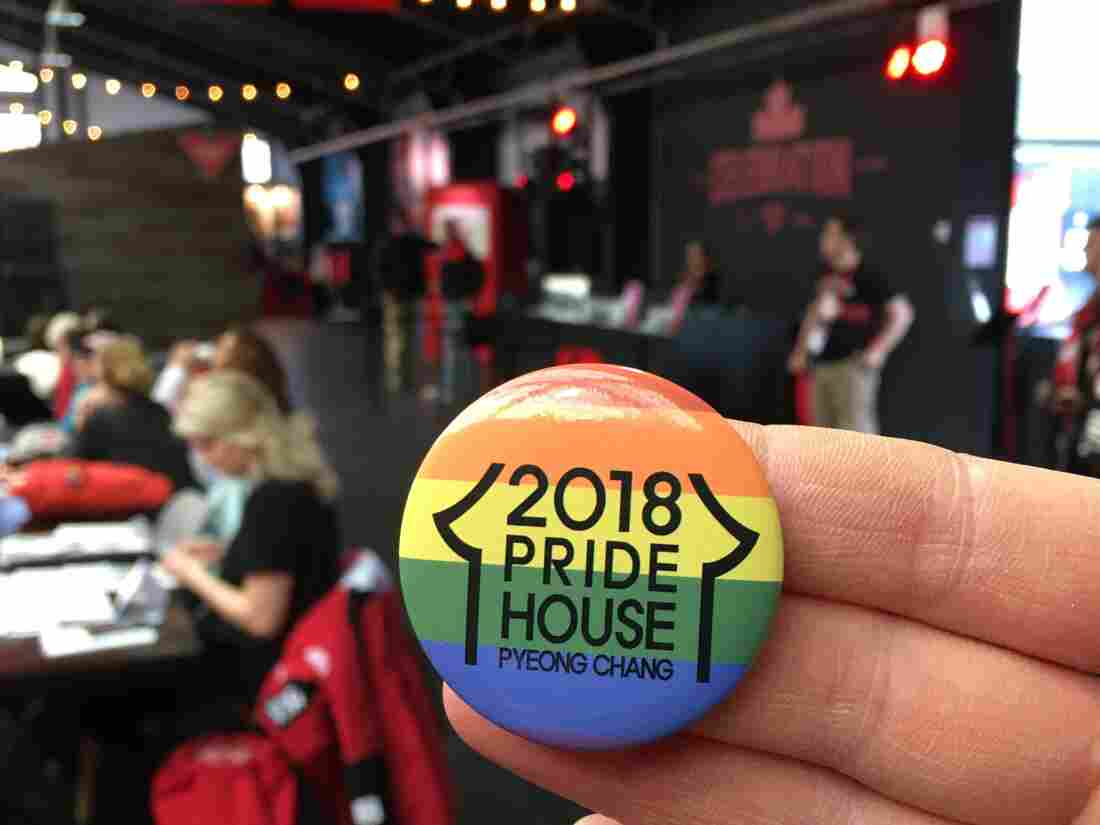 A rainbow button for Pride House Pyeongchang is seen at a display inside Canada House at the Winter Olympics in South Korea. Bill Chappell/NPR hide caption

It's not the only Pride House in South Korea, but it's the first in the world to be embraced by a national Olympic committee: Alongside poutine and beer, Canada Olympic House offers a message of inclusion and gender diversity by hosting a space for LGBTQ fans, athletes and friends.

The idea for this Pride House, organized in collaboration with South Korean activists, is based on the tradition of Olympic delegations opening hospitality houses to showcase their home nations' culture and history and welcome fans. Rather than focusing on a particular nationality or team, the Pride House welcomes all. 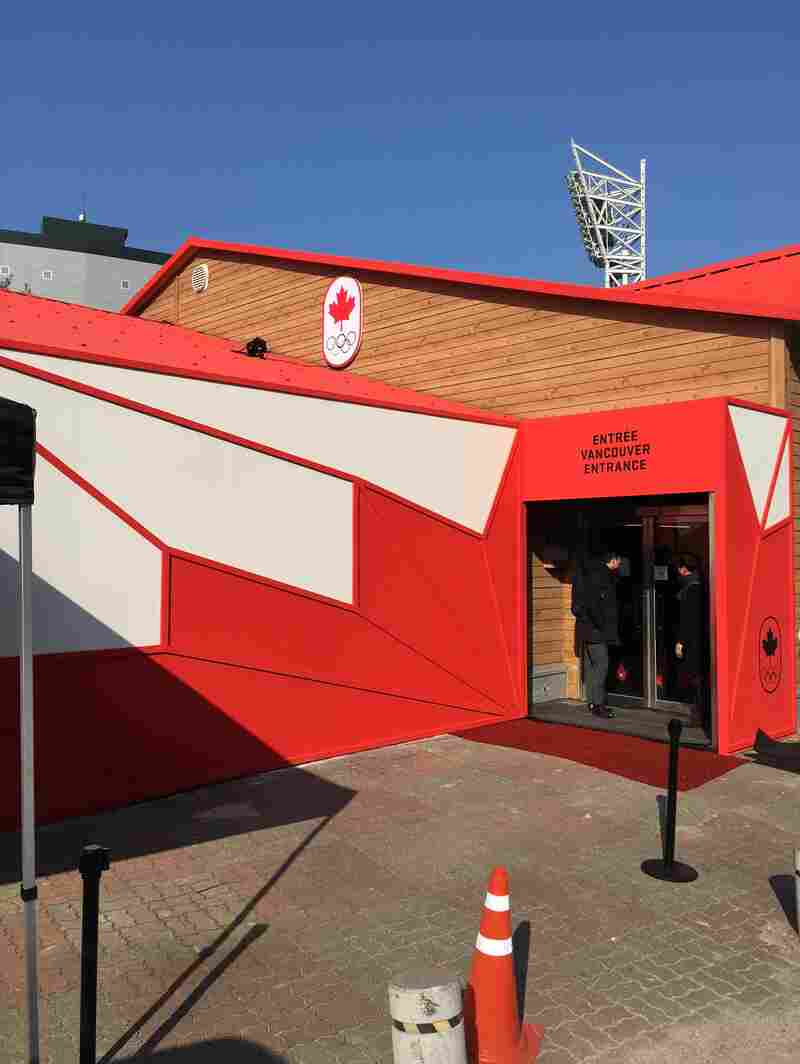 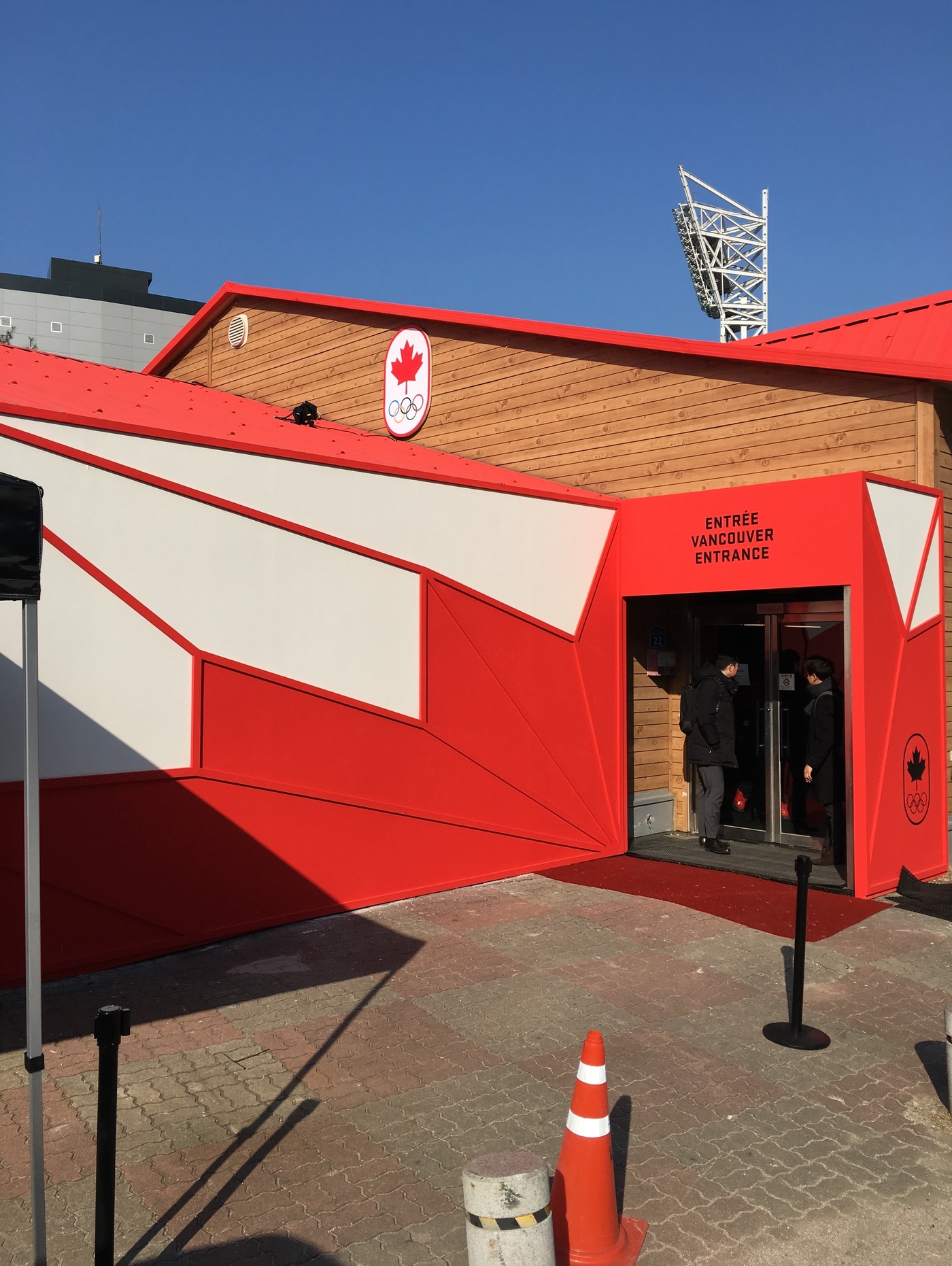 In the Olympic Village, Canada House is hosting a Pride House.

"The mission of Pride House," says Keph Senett, a trustee with Scottish-based Pride House International, is to create a "place where people can go and watch games, and hang out and eat food and all that — sort of experience the games in a safe and welcoming way."

As for Team Canada, Senett said, "They are saying very clearly, 'We support this mission.' "

Canada's hospitality house — created out of a gateball clubhouse (a game similar to cricket) — has a ski-lodge vibe. It offers lounge chairs, fire pits and table hockey games outside. When we visited, a capacity crowd had gathered in a pub-like area inside to watch Team Canada play (and defeat) the U.S. women's hockey team.

The Pride House team and activists from the Korean Sexual-Minority Culture and Rights Center created the welcome message that greets visitors:

"This is your house no matter who you are or where you come from.

You are at home, regardless of your sex, sexual orientation, race, marital or family status, gender identity or expression, sex characteristics, creed, age, color, disability, political or religious belief."

The message concludes, "Be proud. Be you. Be Olympic!"

The Korean Sexual-Minority Culture and Rights Center started preparing to open a Pride House three years ago. The group is staffing a section of Canada House, with a representative on hand to talk with visitors — and a cutout rainbow house for people to pose with for selfies. The group is also operating a separate Pride House in Seoul, hosting Olympic watch parties and other events in the capital.

Senett's group has helped local activists form a Pride House at all but one Olympics since 2010, when the first Pride House opened at the Vancouver Winter Games as an inclusive spot for sports fans to gather. Since then, there have been 13 Pride Houses at big sporting events from the World Cup to the Pan American Games.

Pride House International is a Scottish charity, formed by a coalition of LGBT sports and human rights groups. Senett says local groups normally do their own fundraising that includes donations and some grants.

Until now, every Pride House has been held outside of the official bubble that surrounds mammoth events such as the Olympics, World Cup and other events. But this time, Team Canada offered to host it within its Canada House in Gangneung, site of the flat-ice events at the Pyeongchang Games.

In a statement, Chris Overholt of Canada's Olympic Committee said that Canada "stands behind its commitment of inclusion and diversity in the global sport landscape. We recognize that diversity is our greatest strength... Team Canada is proud to embrace its diversity at Canada House ... as a team, we are stronger when we celebrate our differences."

"It's super-exciting, because it's the first time that a national Olympic committee has officially affiliated themselves," Senett said, "so people are really excited about that, because it's the organization and so forth."

When it comes to social and cultural attitudes about LGBTQ issues in South Korea, a report by Gallup Korea last year found mixed results – including greater tolerance among people under 30 than among those who are older. 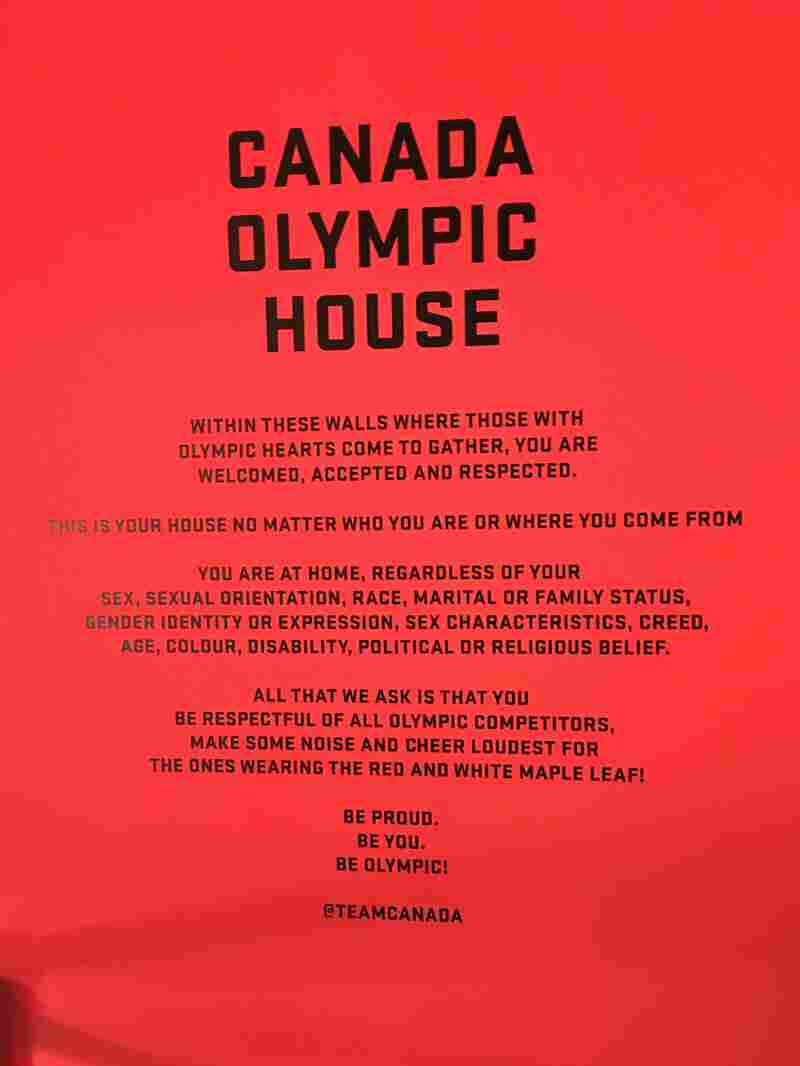 A wall in the foyer of Canada House greets visitors: "This is your house no matter who you are or where you come from." Bill Chappell/NPR hide caption 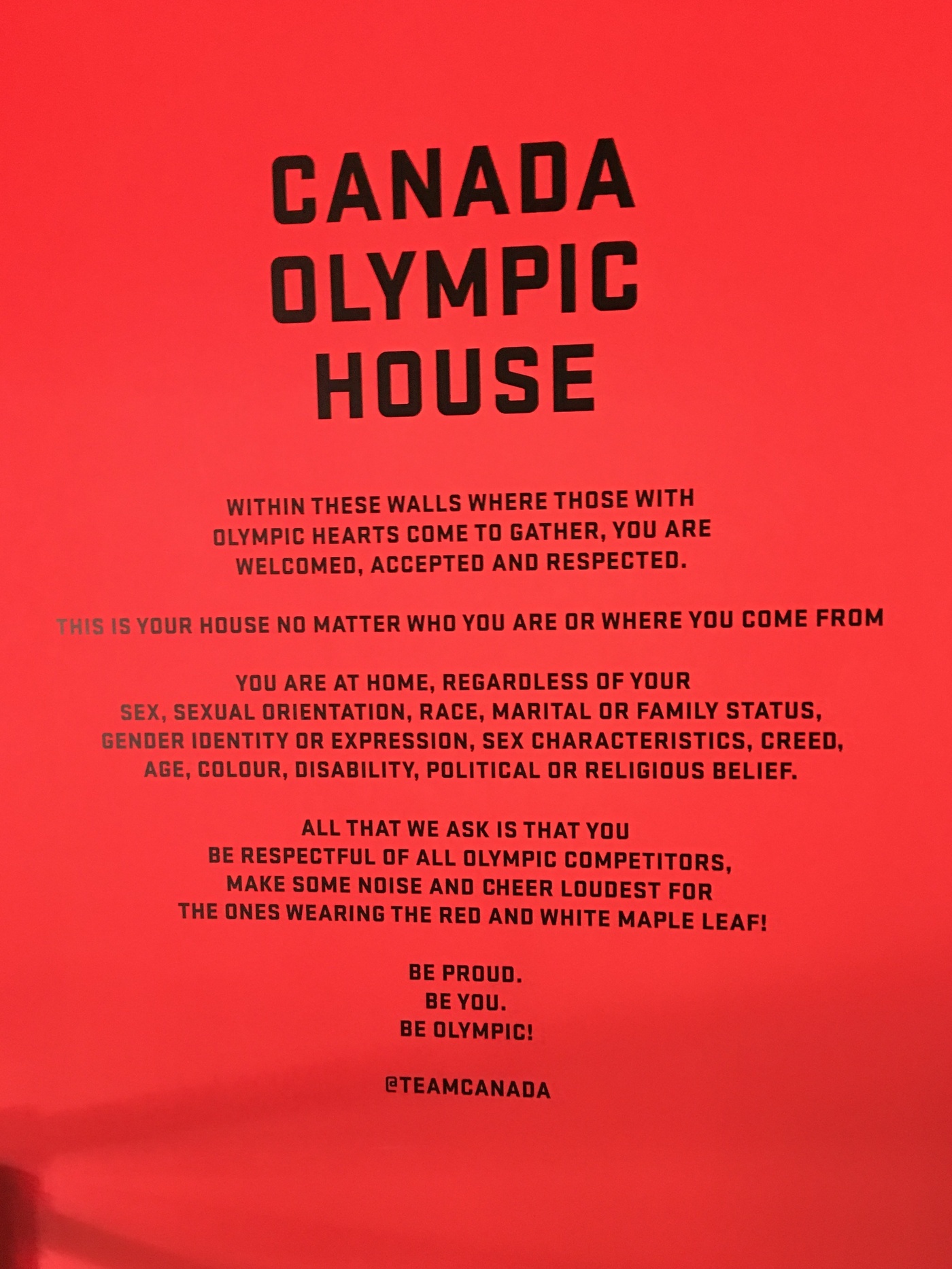 A wall in the foyer of Canada House greets visitors: "This is your house no matter who you are or where you come from."

In that survey, 34 percent of South Korean respondents said they support same-sex marriages, while 58 percent said they oppose it. Among people younger than 30, the number in favor rose to 66 percent.

"As far as the laws go, there's no same-sex marriage here. You just don't live out of the closet. There are no protections for losing your job or losing your housing, based on either sexual orientation or gender identity," Senett said.

But, Senett says, things may be changing.

In 2017, Gallup also reported broad and strong support in South Korea for workplace protections, with 90 percent of the survey's respondents — regardless of how they viewed homosexuality — saying sexual minorities should have the same chances to work.

As for the sporting environment around gender issues in South Korea, an ugly episode made international headlines a few years ago, when a female soccer player's gender was questioned by rival coaches in her pro league. At the time, the player, Park Eun-seon, had competed for the national women's team for more than a decade. She had also undergone a gender test before playing in the 2004 Athens Olympics.

The only time since 2010 that Senett's group has been unable to create an Olympics Pride House was at Sochi in 2014, when their request to open a space was denied because of Russia's anti-homosexuality laws.

Faced with that setback, the group responded by hosting smaller events elsewhere. And, Senett said, Pride House International sent letters to Russian authorities and to the International Olympic Committee that are now part of the record.

"Things change little by little," Senett said. "But we want to see sort of the entire sporting environment become friendlier in those ways, more open, more accepting — and not in a touchy-feely way, but in the sense of organizations taking steps to have some teeth when there is discrimination."

She added, "These are these are groups that have such an incredible amount of money and influence and power in the world. And we want to see them using it for good."